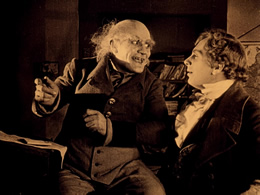 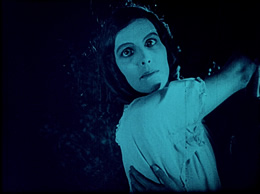 Few filmmakers from the silent era could provide more nightmare fuel than F.W. Murnau, whose prestigious classics like Sunrise and The Last Laugh are balanced by stylish, uncanny exercises like Phantom and a still-intense version of Faust. However, his major claim to horror fame remains this 1922 vampire masterpiece, originally titled Nosferatu, eine Symphonie des Grauens (or Nosferatu, a Symphony of Fear), which landed in copyright trouble with Bram Stoker's estate for lifting its plot structure and some character roles (albeit with different names) from the 1897 novel, Dracula. Despite efforts to eradicate all copies of the film from circulation, Murnau's film survived and made a permanent pop culture icon out of its title character, embodied by Max Schreck as a bald, rat-toothed predator spreading pestilence across Europe. His appearance went on to inspire future bloodsuckers in everything from the 1979 Werner Herzog remake and a miniseries version of Salem's Lot to the 2015 horror comedy What We Do in the Shadows, while Murnau himself was even fictionalized as a vampire-abetting artist in Shadow of the Vampire and American Horror Story: Hotel. Thanks to its public domain status, Nosferatu has been readily available on home video from a large number of labels with a bizarre diversity of music scores (ranging from classical to goth metal) and only a small handful of truly respectable transfers.

For those not familiar with it already, Nosferatu charts the havoc unleashed when Thomas Hutter (von Wangenheim) is sent by his very eccentric employer, the Renfield-ish Knock (Granach), to Transylvania to handle the sale of a German estate to the mysterious Count Orlock (Schreck), who inspires terror in the local villagers. Back home, Ellen (Schröder), Hutter's wife, suffers from nightmarish visions as her husband is menaced by the bloodsucking Orlock, who soon makes his way to their town via a cursed ship that becomes plagued with rats. Both the vermin and Orlock pose a dark threat to the town, with Hutter barely returning with his life as well, and it's up to Ellen herself to find a way to permanently stop the undead menace.

Thanks to both Murnau's wonderful visual 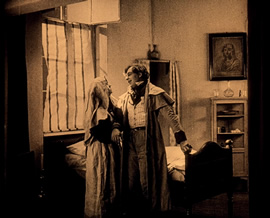 sense, the esoteric influence of producer Albin Grau, and the terrifying performance by Schreck, Nosferatu has managed to transcend its silent film categorization and, like The Phantom of the Opera, continues to appeal to all ages, especially around Halloween. The fast pacing and deft tweaks to the original novel are major assets as well, with the story veering into entirely original territory in the final third with an unforgettable climax far more sexualized than the more traditional confrontation 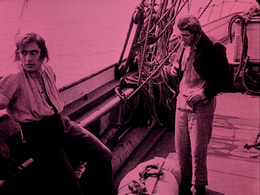 conceived by Stoker. The film also represents a high point of German Expressionism on film, adapting techniques pioneered by previous artists and filmmakers to a fairy tale template with appropriately physical, primal performances. On top of that the film turned out to be a major influence on future vampiric cinema, most significantly introducing a vampire's fatal exposure to sunlight that would become a familiar trope in later decades.

Three significant English-friendly Blu-rays of Nosferatu have been released in recent years, with two of them offering separate transfers and extras. November of 2013 saw nearly simultaneous editions in the UK from Eureka's Masters of Cinema line and in the US from Kino Lorber, both sourced from a sterling restoration by Friedrich-Wilhelm-Murnau-Stiftung. Some inherent damage will always remain inherent in this film, but this is the longest and cleanest edition available. The Eureka disc sports two audio commentaries, a new: one with film historian (and Mabuse expert) David Kalat and, ported over from their earlier DVD, one by historian R. Dixon Smith and critic Brad Stevens. Both are very dense and informative with a wealth of material about the film's production, legal issues, and aesthetic influences. Also included is the 53-minute "The Language of Shadows, a thorough featurette by Luciano Berriatúa about Murnau's career leading up to this film and his visual innovations, along with new video appraisals from author Kevin Jackson and director Abel Ferrara (who offered his own spin on vampirism with The Addiction) as well as a thick booklet with essays by Gilberto Perez, Albin Grau, Enno Patalas, and Craig Keller.

The Eureka disc features the original German restoration with optional English subtitles for the text intertitles, but the Kino Lorber release is spread out over two discs retaining both that same transfer and presentation along with an alternate version of the same transfer with English intertitles. "The Language of Shadows" is carried over here, but otherwise it's more modest in terms of extras with the rest of the material 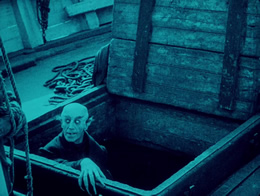 consisting of a promotional teaser, a modest gallery, and excerpts from other Murnau films (Journey into the Night, The Haunted Castle, Phantom, The Finances of the Grand Duke, The Last Laugh, Tartuffe, Faust, and Tabu). Both releases feature a modern performance of the original German score composed by Hans Erdmann in DTS-HD 5.1 and LPCM stereo. 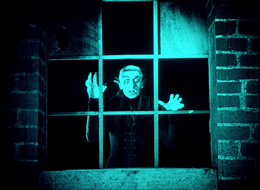 Two years later, the BFI offered its own UK Blu-ray release featured a completely different 2K scan of the film element held by Photoplay Productions, with different, less intense color tints, different damage (about the same amount), and deeper blacks (the source of the frame grabs in this review). As with its previous 2001 DVD, this version is especially valuable for horror fans as it contains a dramatic score written for the film by James Bernard, the composer of the majority of Hammer's Dracula cycle with Christopher Lee commencing with Horror of Dracula. It's a great, full-blooded score and a popular favorite with good reason, presented here in both DTS-HD 5.1 and LPCM stereo options. The 5.1 is more fun if you want to fill the room, but the stereo sounds a bit richer and fuller. Being from a different film source, it also runs shorter at 88 minutes due to a slightly accelerated speed and the usual vagaries of missing frames common to silent films.

In terms of extras, the only significant extra from the prior BFI DVD, a 24-minute chat with Christopher Frayling, is carried over here, and it's a good one as he runs through the film's historical significance and tackles some of the various theories over the years including some political readings and Stan Brakhage's assertion that it was a sort of gay camp statement from Murnau. Otherwise it's all new goodies here starting off with the crazy "Le Vampire," a 9-minute Jean Painlevé short from 1945 about nature's predators and how they influenced the concept of a human vampire and served as a potent symbol of fascism. Unrelated to vampirism but very welcome here is "The Mistletoe Bough," a Percy Stow supernatural short film from 1904 recently restored by the BFI. Cited as the earliest surviving Christmas ghost story on film, it's a little 8-minute wonder featuring a delicate new music box-style score by Pete Wiggs of the great British electronic dance group Saint Etienne. Also included are a two-minute gallery of Grau's production drawings and draft publicity materials, as well as an illustrated liner notes booklet with an essay by Kalat (about the famous legal wrangling with Mrs. Stoker and one-shot company Penta Film) and a fascinating essay by Brian J Robb focusing on the occult symbolism slipped into the film by Grau, who had an unusual agenda that should have an effect on how you watch the film. An essential part of any horror movie collection.