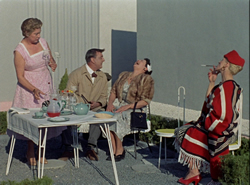 Arguably the most important comedic name in French cinema, Jacques Tati was one of the pivotal postwar figures in the growing popularity of his country's film 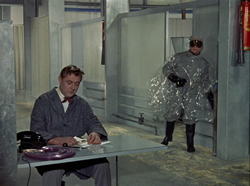 s around the world; in fact, though he only directed five feature films, he remains popular and influential today for both his technical prowess and his still-relevant view of humanity coping with a rising tidal wave of technology and modernism. Often cited by film fans as a particular favorite, Mon Oncle is a rare outright comedy to become a major international award winner and, though family friendly, is still surprisingly surreal and striking in both its visuals and gag constructions.

More a series of connected sketches than a cohesive narrative, Mon Oncle returns to the familiar figure of Mr. Hulot (played by Tati as usual), trying to adapt to the changing whims and fads of the second half of the twentieth century. In this case he's gone to stay with his relatives, the Arpels, who manage to keep up with the latest and greatest (including their pet dachshund). Here the gray area between suburban and city living is explored as characters live in the moment with houses, furniture, and even clothing designed more for its chic appeal than anything resembling common sense. Of course, it all still looks great, especially that upright fish fountain that only gets switched on for special occasions. Fans of Tim Burton in particular will recognize a major inspiration here with the angular buildings and colorful, quirky decor, not to mention the skewed depiction of "normal" domestic life; Hulot might not be an outsider as extreme by comparison, but he certainly shares some cinematic DNA with the many cinematic mis 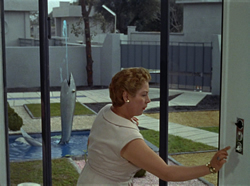 fits who followed in his wake. Almost perversely, this is also perhaps Tati's warmest film; the human connections here (especially at the end) manage to flourish no matter how imposing the challenges of day-to-day survival might be.

Fascinatingly, Tati shot most of this film twice, in both French and English. The latter version (which played some English-speaking venues and became a 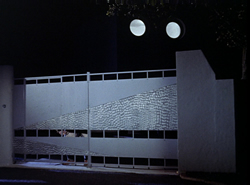 TV mainstay if not a home video one) doesn't take the easy way out of simply dubbing the dialogue; instead whole scenes, fashions, and signs are calibrated to give the film a more Anglo-friendly appearance, resulting in an odd alternate universe presentation that will disorient anyone familiar with this film only through its various DVD-era releases.

The various digital releases are probably best represented in standard def with the Criterion version, released in 2004, though none are particularly outstanding; all look pretty harsh, with artificial contrast boosting (of varying degrees) which also causes the grain become far more pronounced and artificial looking. The BFI Blu-Ray corrects these issues with a much more natural presentation in keeping with the color schemes and brightness levels you'd normally see in a 1950s film; the whites don't blow out anymore, and while it's never been the most razor sharp of films in cinematic terms, it looks quite nice here. As usual, the film is presented in its original 1.33:1 aspect ratio, which has been the case with every other edition. The PCM audio sounds very good, with the complex soundtrack (which plays with perceived depth through overlaid sound fields) sounding very good throughout. The French version is the default one with optional English subtitles (though the actual dialogue takes up a pretty small percentage of the film); however, the English My Uncle cut is also included. Since many scenes play out a bit differently, this one actually clocks in much shorter (107 minutes) and makes for an excellent example of how a film can be altered in incremental but eventually major ways when switching languages. The trailer is included only on the DVD version (both are included in this dual-format edition), and the liner notes booklet includes a brisk and informative essay by Philip Kemp as well as additional comments about the English version and a Tati bio.