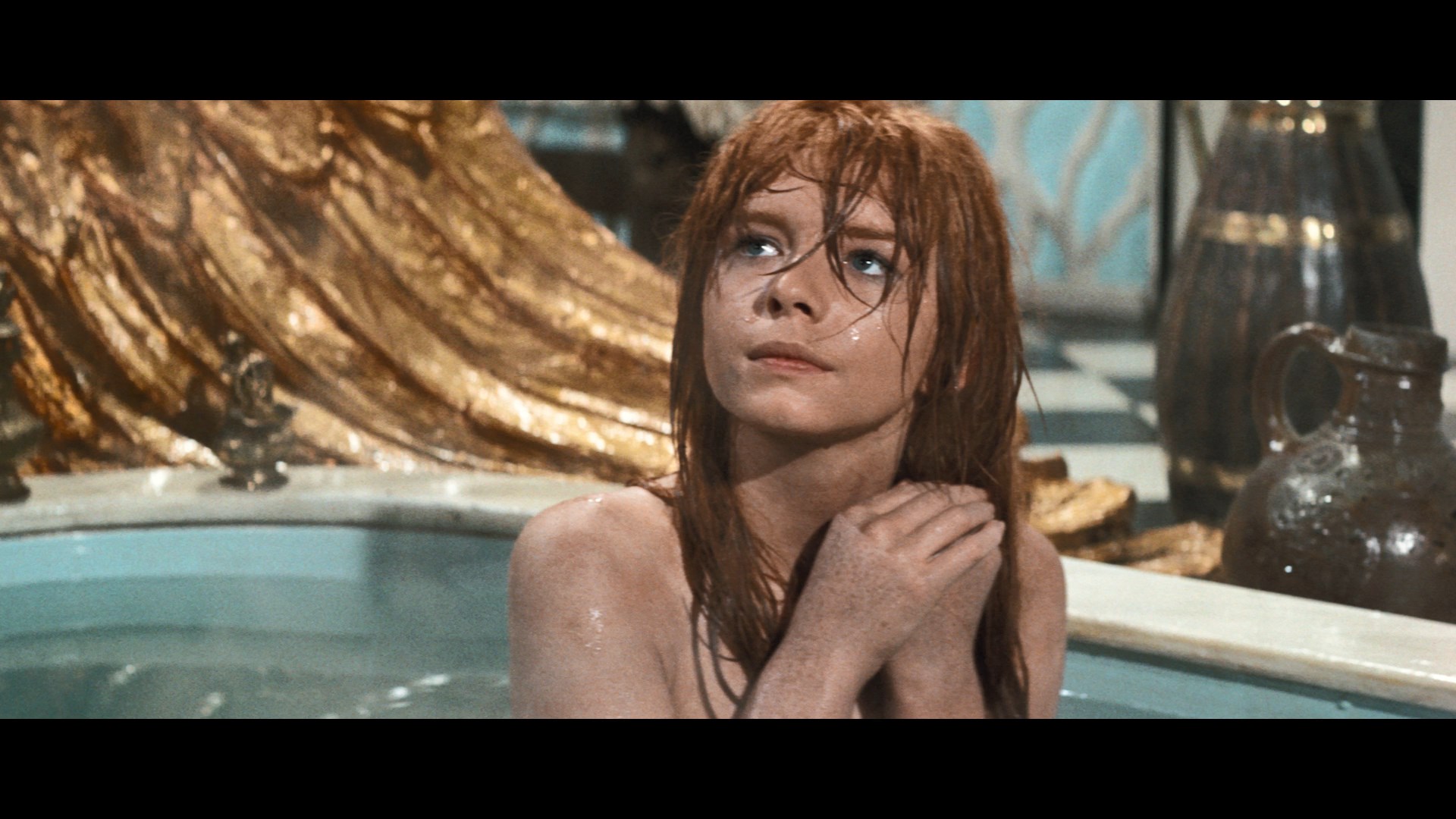 undeniable high point of the AIP cycle of Roger 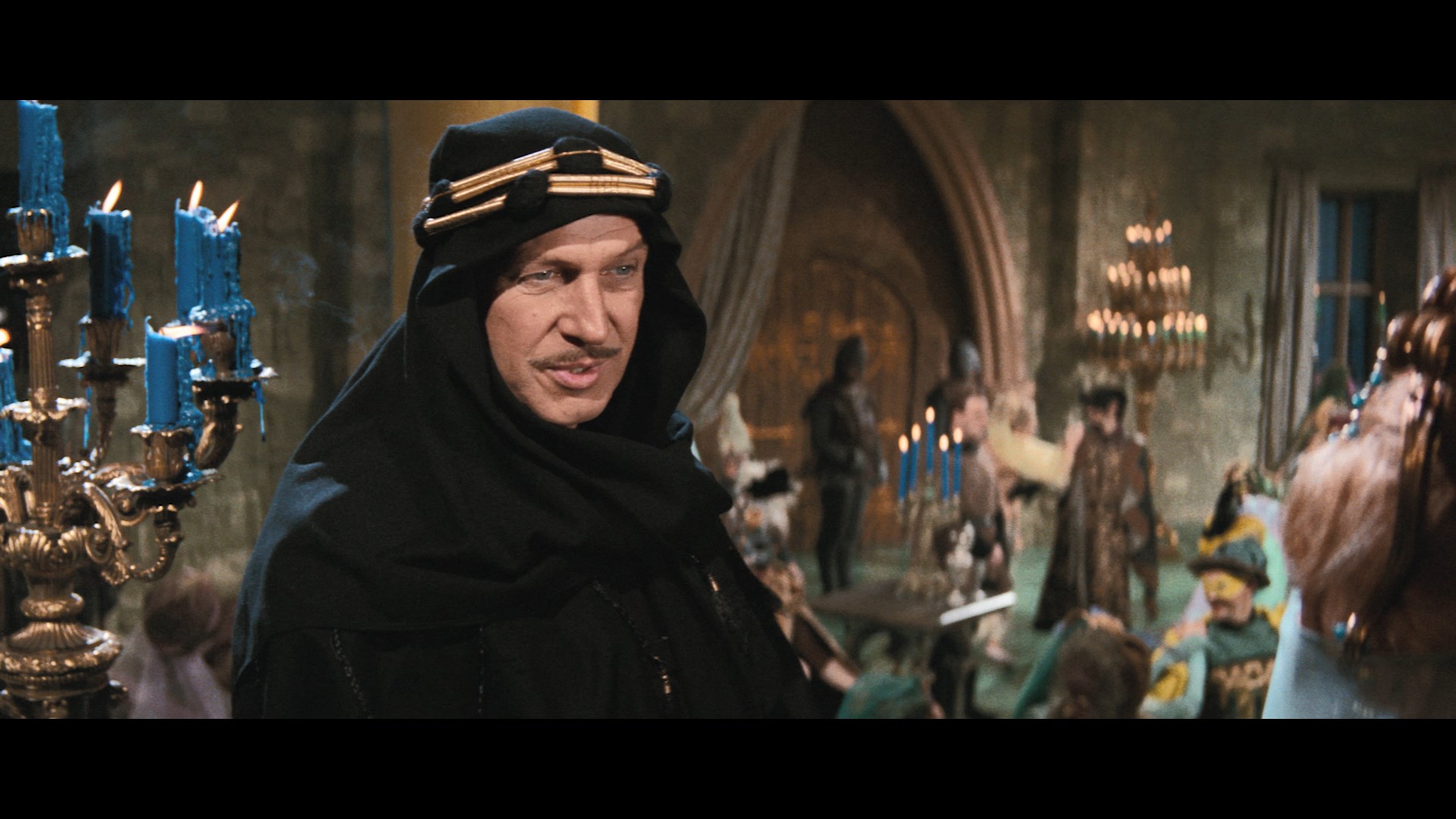 Corman-directed Edgar Allan Poe adaptations (and cited by many as the very best), The Masque of the Red Death was the penultimate film in the cycle and marked a significant change in approach thanks to the switch to shooting in the U.K. with a predominantly English crew. Also integrating elements of the another Poe story, "Hop-Frog," this is easily the most lavish and ambitious of the films, anchored by Vincent Price's darkest performance of the decade and vibrant cinematography by a young Nicolas Roeg. Maintaining the core theme of Poe's story about the hubris and selfishness of using money and class to oppress others during a plague, the film obviously resonates far beyond its era and now stands as one of Corman's finest films.

While a brutal plague known as the Red Death sweeps across medieval Italy at the behest of a mysterious red-cloaked figure, the devil-worshiping Prince Prospero (Price) keeps his boot on the necks of the local villagers but retreats to his castle when an old woman is afflicted with the blood-emitting disease. A nighttime altercation inspires him to bring along the young Francesca (Asher) with her father (Green) and lover (Weston) in a bid to place her in a moral dilemma that will corrupt her soul and turn her to the forces of darkness, a mission Prospero intends to accomplish much to the chagrin of his black mass-loving mistress, Juliana (Court). As the nobility hides from the plague in the castle, unrest simmers among the guest including the cruel Alfredo (Magee), who becomes fixated on a diminutive dancer who's in love with the court jester, 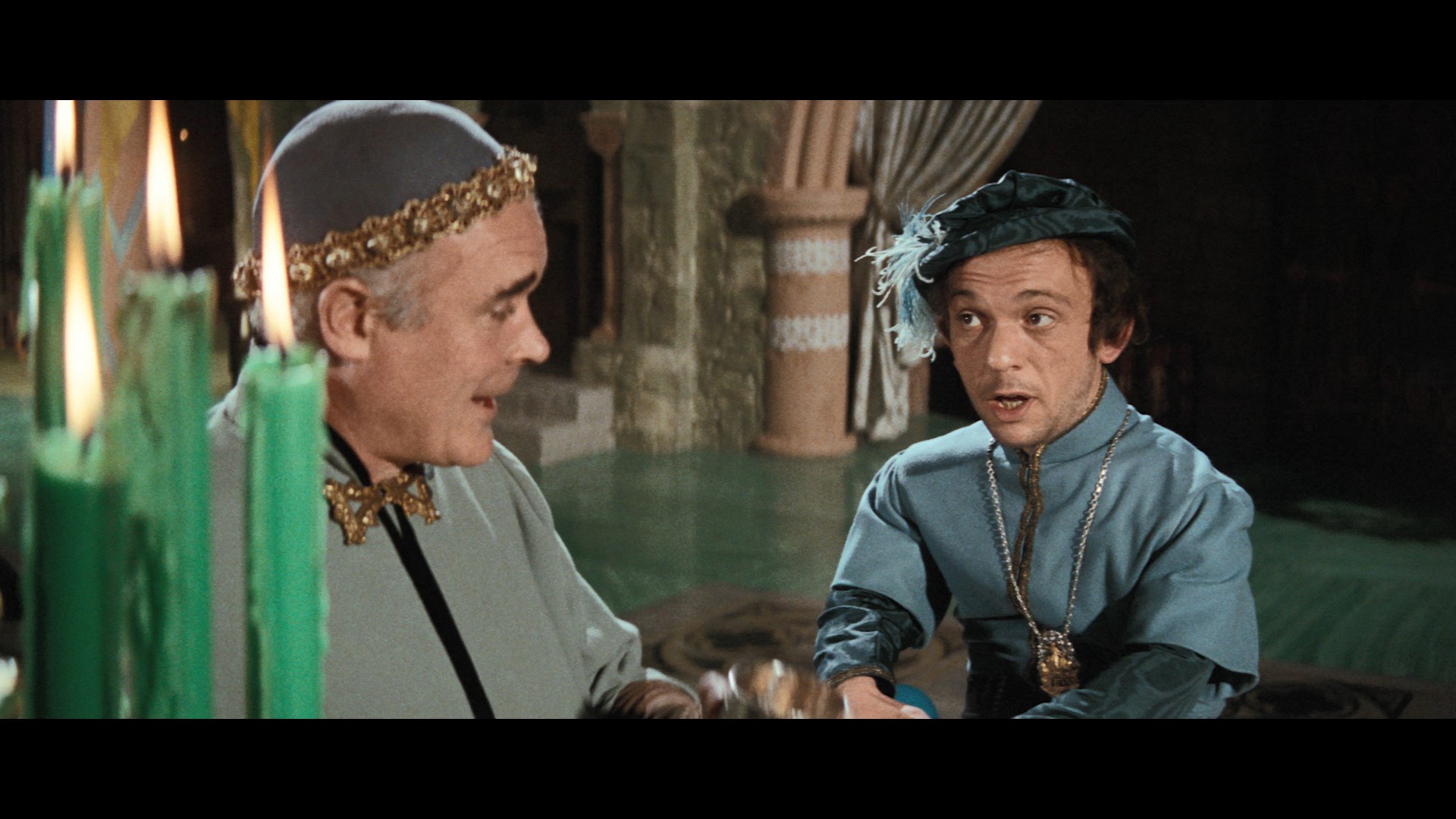 Hop-Toad (Martin). To bring the festivities to a climax, Prospero prepares a diabolical masked ball where no guest is allowed to wear red, a decree that summons one uninvited 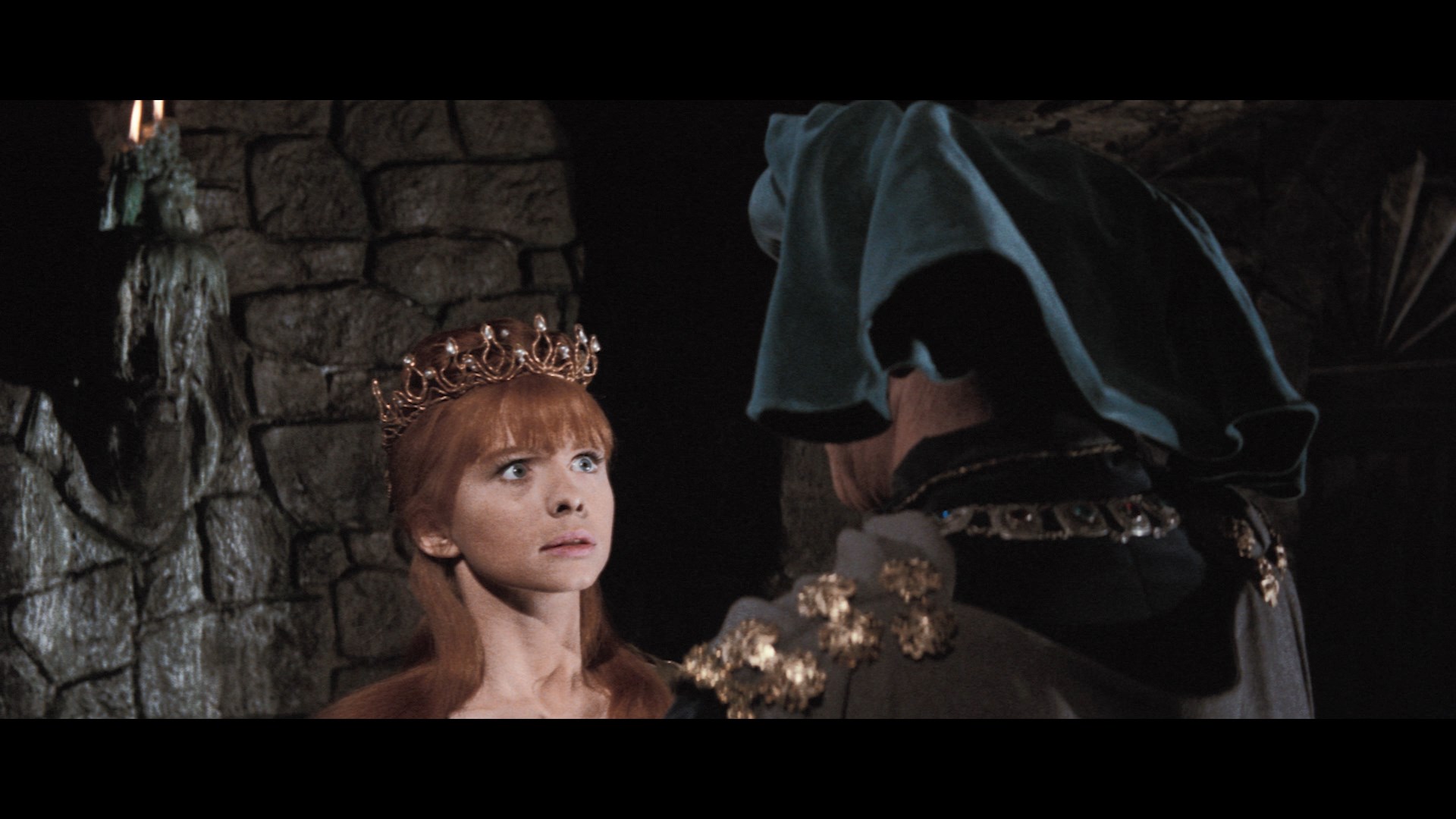 Though it carries over many of the Poe-AIP ingredients audiences had come to know and love such as Price, Technicolor-friendly candles, and a psychedelic dream sequence, Masque departs from its predecessors in a number of ways via its medieval setting and much stronger content than usual, some of which ended up being censored in the U.K. and other territories. Among these are the potent initiation ceremony performed by Court and her bloody final scene, as well as other brief acts of blasphemy and brutality befitting the subject matter. Corman also aims for a loftier art house including some obvious visual nods to Ingmar Bergman's The Seventh Seal, and the skilled cast is one of the best the director ever had with Magee (also in the Corman-produced Dementia 13) making a particularly great secondary villain. For these last two films (followed by Tomb of Ligeia), Corman also departed from usual composers Les Baxter and Ronald Stein, in this case getting an effective score by English jazz musician David Lee that offers its own take on that trademark AIP horror sound.

In addition to its convoluted censorship history, Masque has existed in a variety of other edits as well with some prints featuring extra bits including Price walking through the castle and an extension to the Hop-Toad subplot. The longest version available for years was the one issued by Image Entertainment on laserdisc, with shorter edits turning up on DVD from MGM and Blu-rays from Scream Factory and Cinema Cult. That first Scream Factory edition in 2013 was part of the label's first entry in The Vincent Price Collection box sets, featuring a Corman interview (18m52s) ported over from the DVD, a Steve Haberman 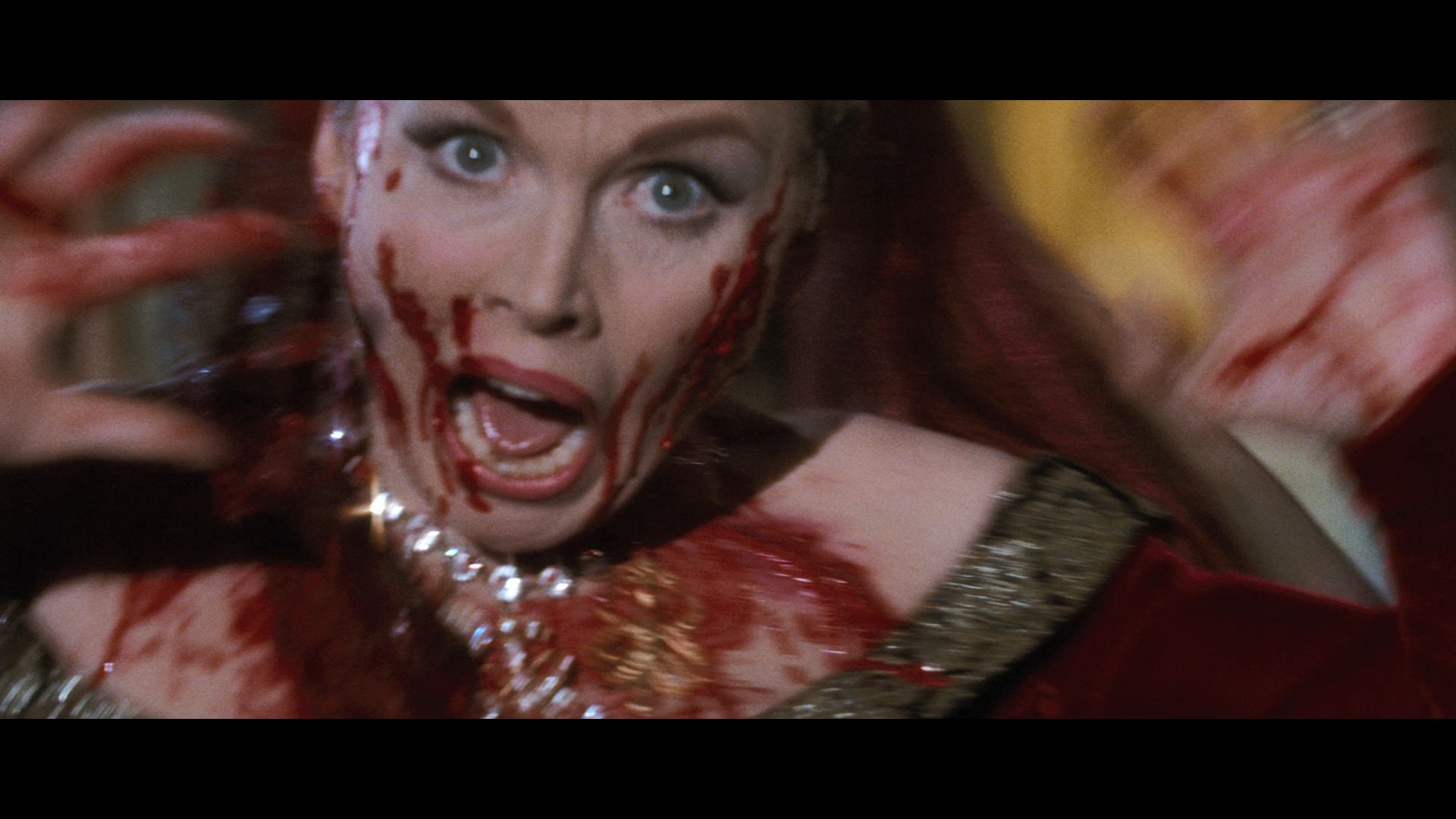 commentary, and a strangely textless trailer. Various legal complications led to that set going out of circulation very quickly, with the film's original U.K. ownership 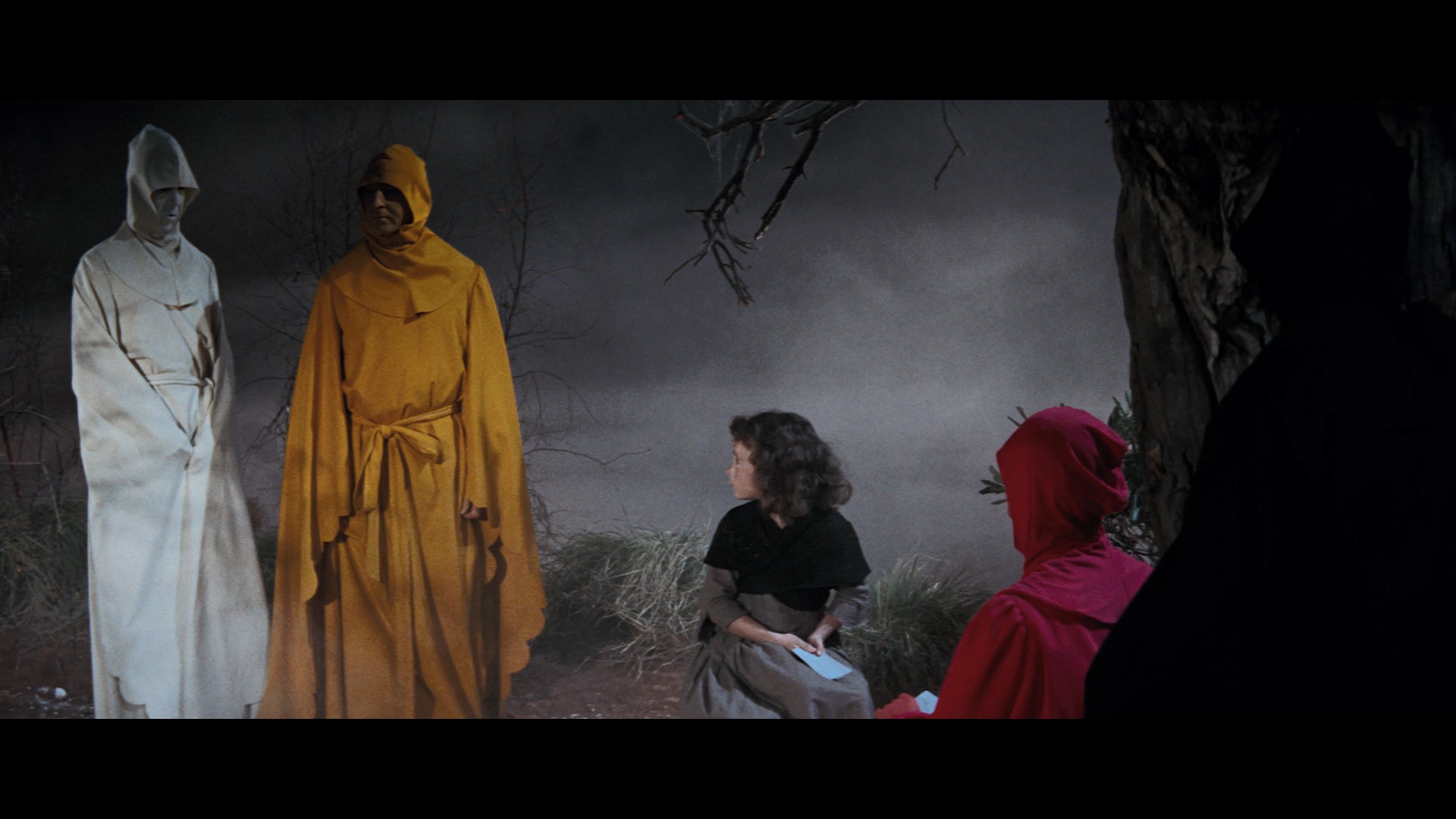 at the time by Anglo Amalgamated (rather than AIP, which passed on to Orion and then MGM in the U.S.) made things even more tricky with this film sitting out Arrow Video's box of Price-Poe titles. In 2018 the film underwent a significant restoration (via the Academy of Motion Picture Arts & Sciences Film Archive and The Film Foundation funded by the George Lucas Family Foundation) to put all of the footage back together for a truly complete version, and after a lengthy wait, that version finally debut in 2020 on Blu-ray from Scream Factory as a standalone title and in a reissued version of its Price box. All the previously censored bits are here including a fleeting bit of implied nudity, the full Hop-Toad subplot, a nasty shove against one character, and some stronger dialogue. The shorter, standard theatrical cut is included as well (though why anyone would opt to watch the censored version now is a mystery), and the new transfer is a real stunner with gorgeous colors throughout, better detail, and a cleaner overall appearance. The DTS-HD MA English 2.0 mono track is also in prime condition throughout and features optional English SDH subtitles. The solid Haberman track is carried over for the shorter cut, while the extended one comes with a new commentary featuring Kim Newman and Barry Forshaw analyzing all things Poe, Corman, and Gothic horror in the context of the film. A new video intro by film historian Stephen Jones (7m31s) charts out the essentials of the film as well as its place in both Corman's career and British horror. Also carried over is the archival Corman interview, plus the usual textless trailer and an upgraded photo gallery (4m27s).

In early 2021, StudioCanal bowed the film on U.K. Blu-ray from the same excellent restoration of the extended cut with picture quality that looks virtually identical to the U.S. release, which is good news. Audio- 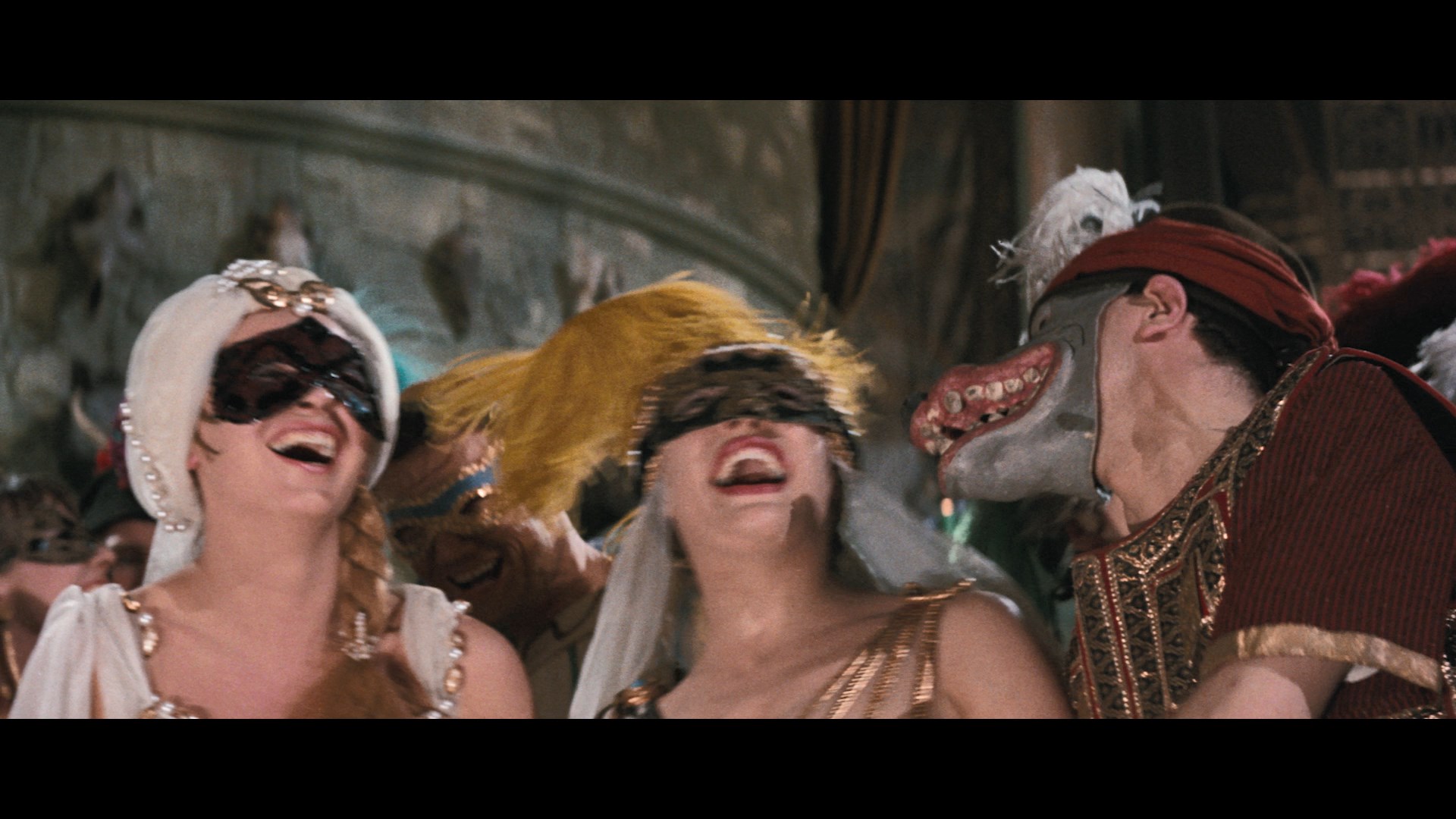 wise it's the same as well (LPCM instead of DTS but sounding the same to these ears), with optional English SDH subtitles provided. 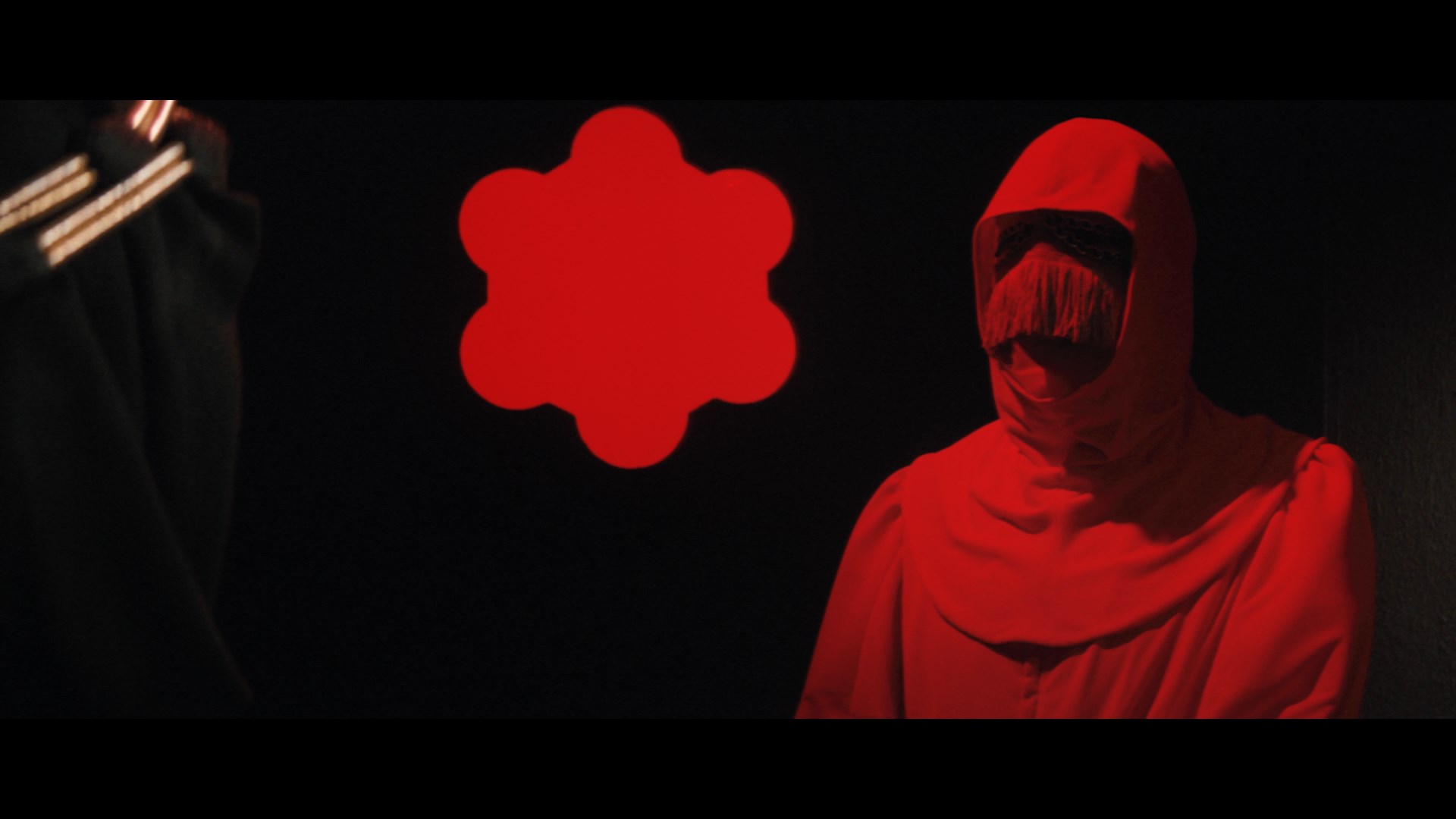 This time you get a new, different commentary with Newman, joined this time by Sean Hogan for a thorough and enjoyably lighthearted academic look at the film including the horror connections to Ingmar Bergman, the financial and logistical factors involved in shooting in the U.K., the crafty approach to expanding the very short original story, nods to other Poe works, the state of AIP, and more. The video extras kick off with the new featurette "Colour and Censorship in The Masque of The Red Death" (10m12s), which features Keith Johnston analyzing Roeg's cinematography, the role of color in the visual aesthetic of the film, and the bumpy road it took to reach U.K. moviegoers. Then you get an in-depth Corman conversation with Newman at The BFI (61m36s) from a 2015 celebration of Gothic filmmaking in TV and film, which focuses on the Poe cycle from his initial discovery of the author through his approach to key stories and how they wove in and out of his career in the 1960s. They also touch on some of his other horror work as well including A Bucket of Blood. Some of this anecdotes will seem very familiar if you've seen the other Poe-Corman releases, but there's also a lot of new material here that makes it worth a look for a very solid interview overall. Also included is the usual archival Corman interview, followed by a short but pretty great behind the scenes gallery (48s) including some fun shots of Asher playing around during production. The disc also comes with a booklet featuring liner notes by The Academy preservationist Tessa Idelwine and a selection of artcards. 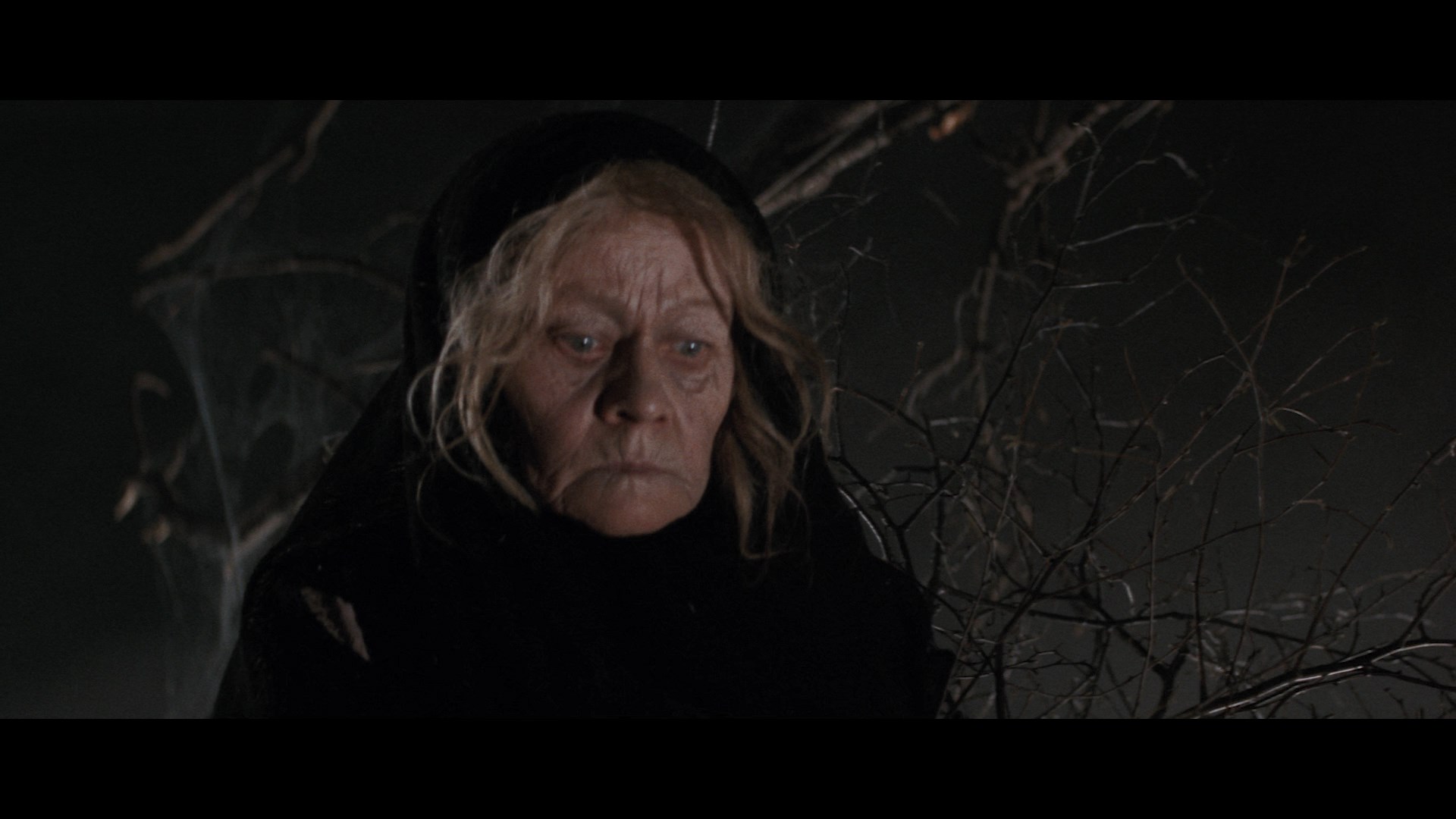 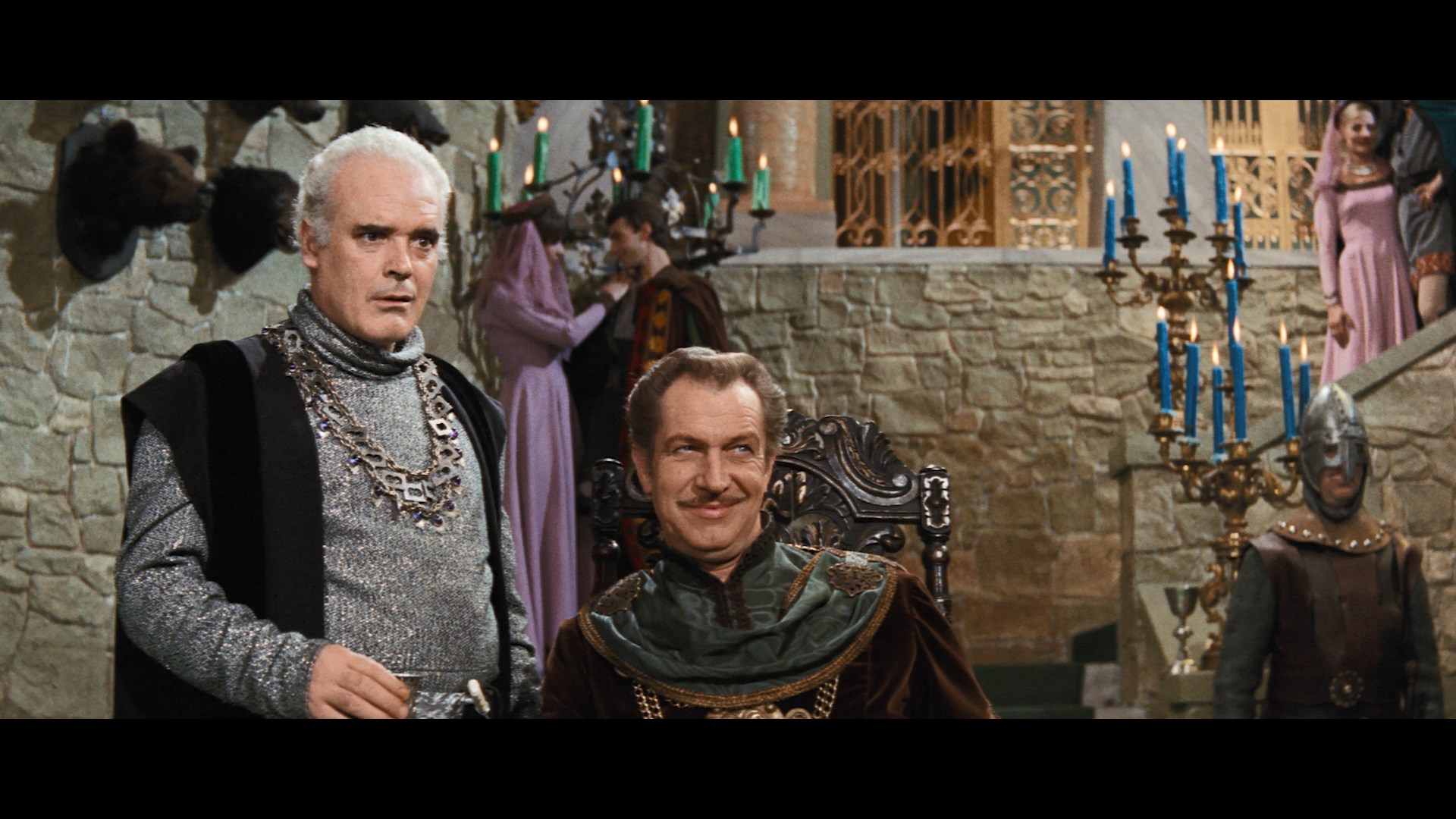 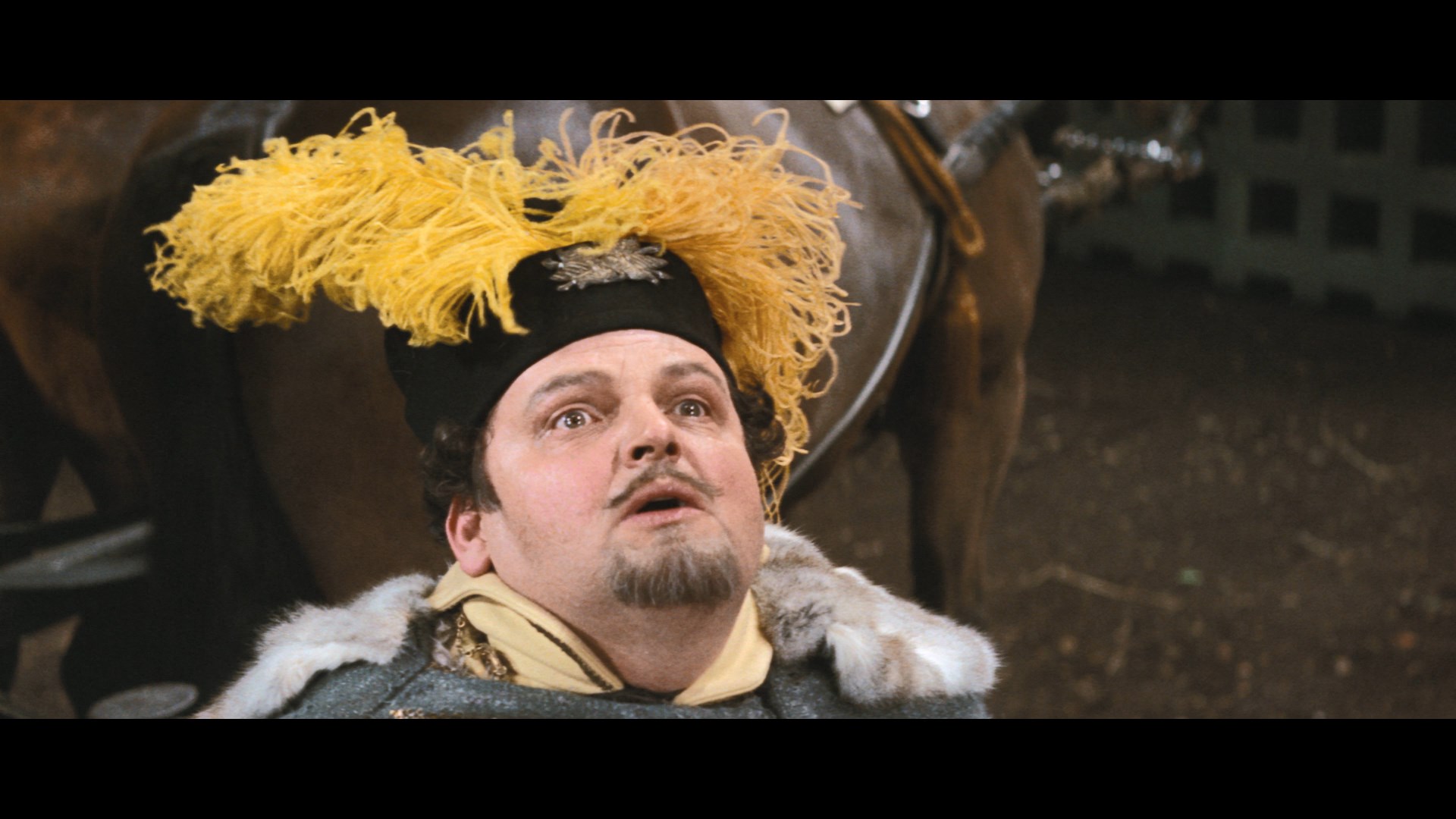 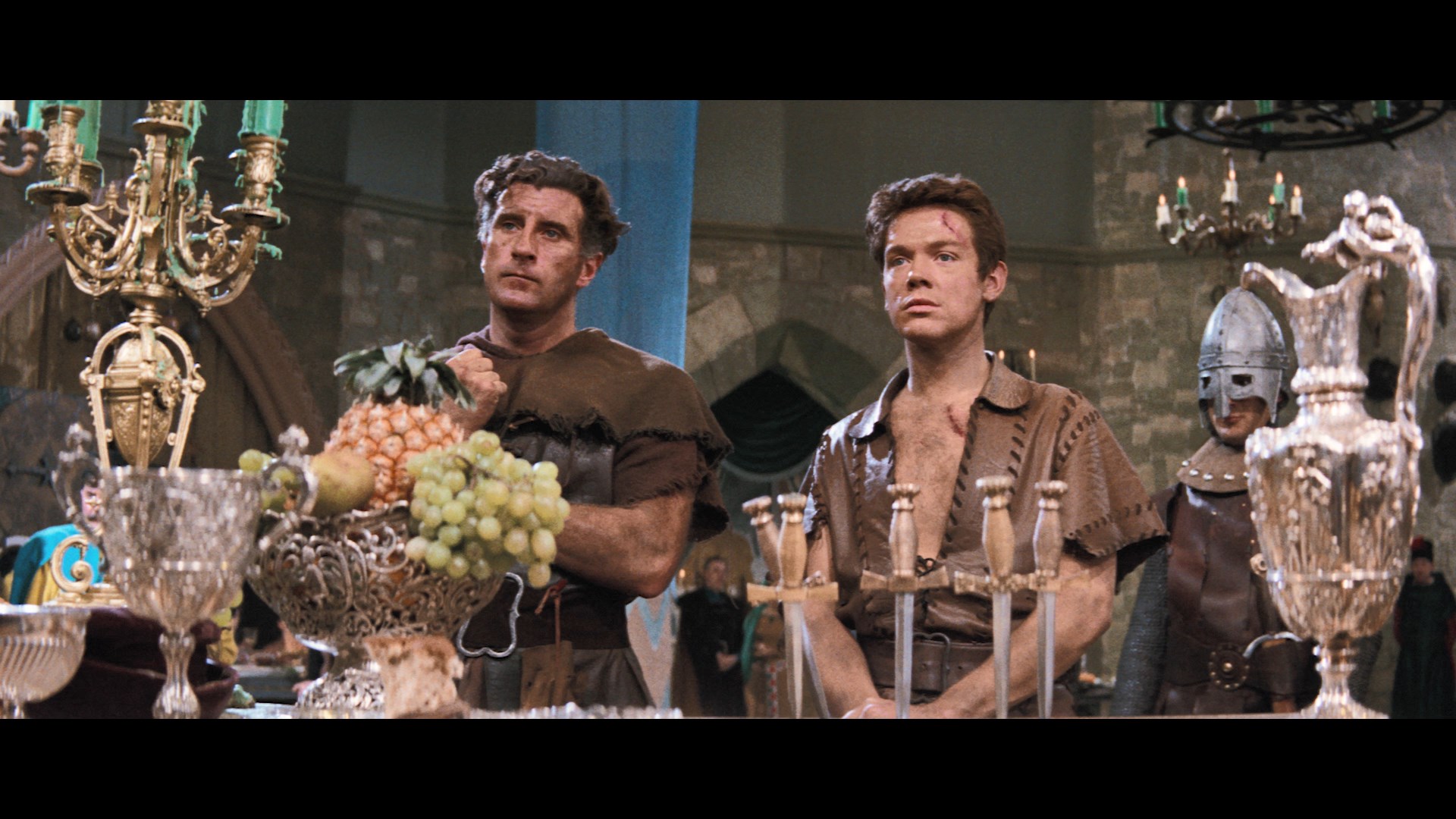 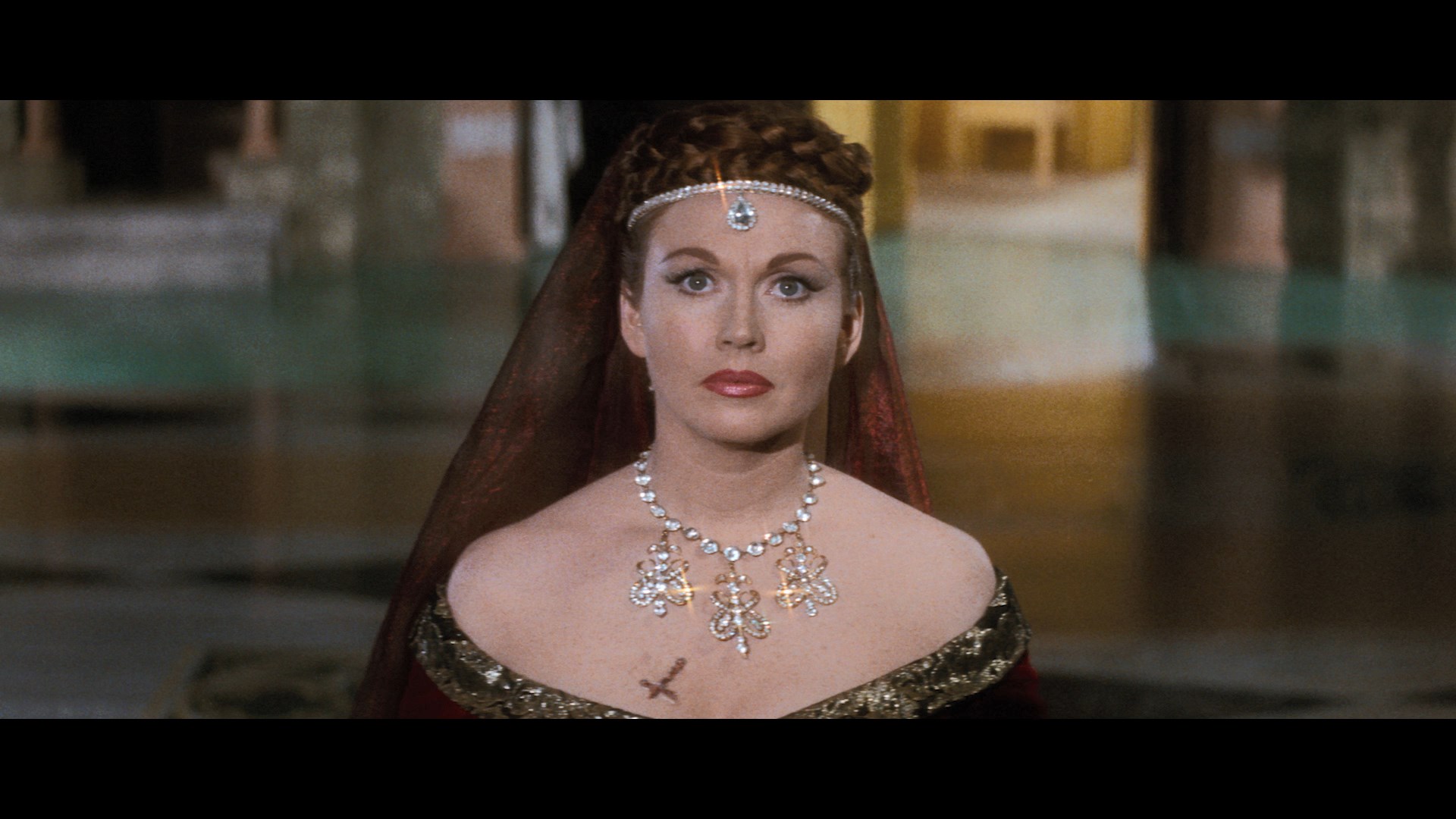 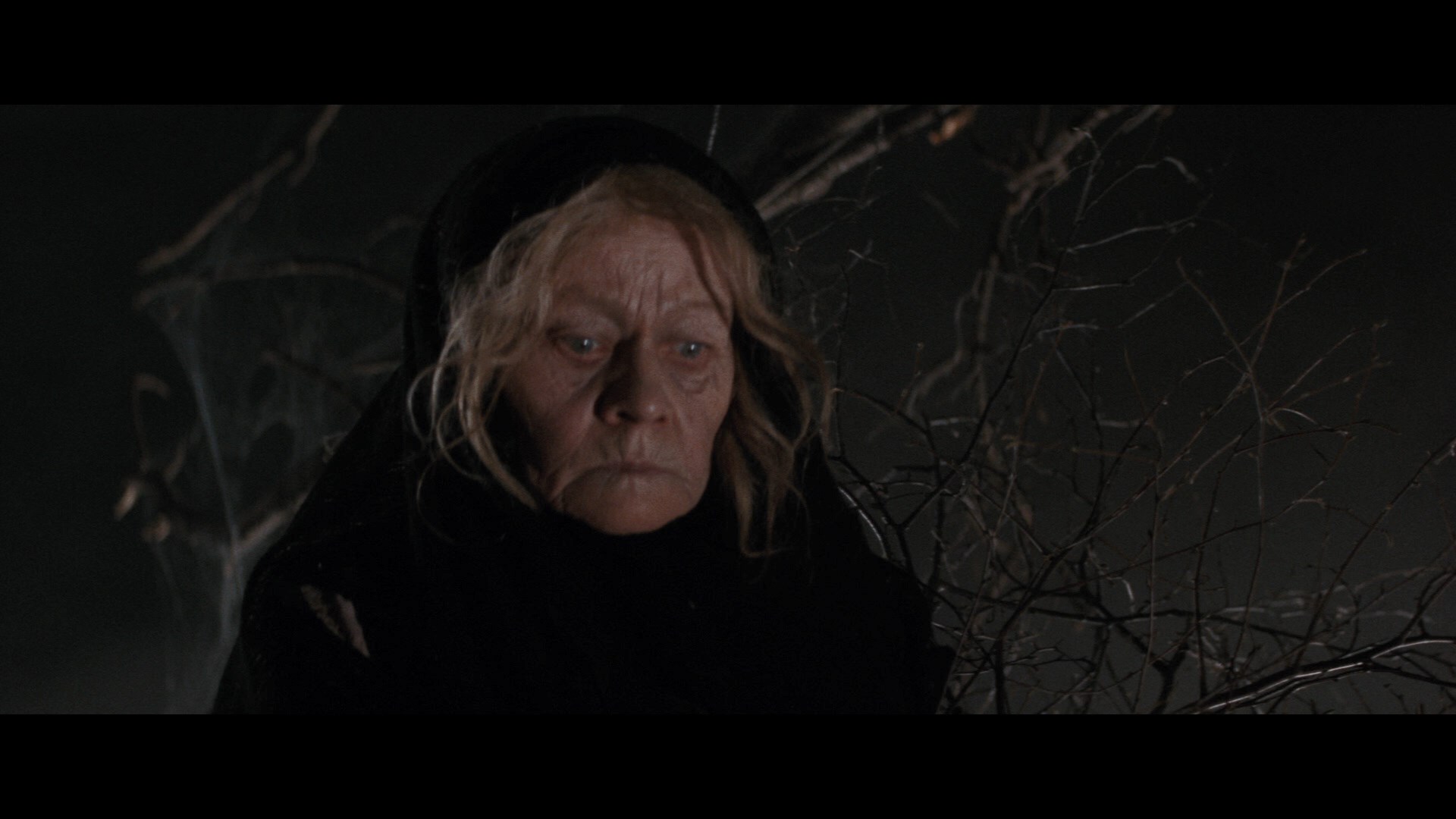 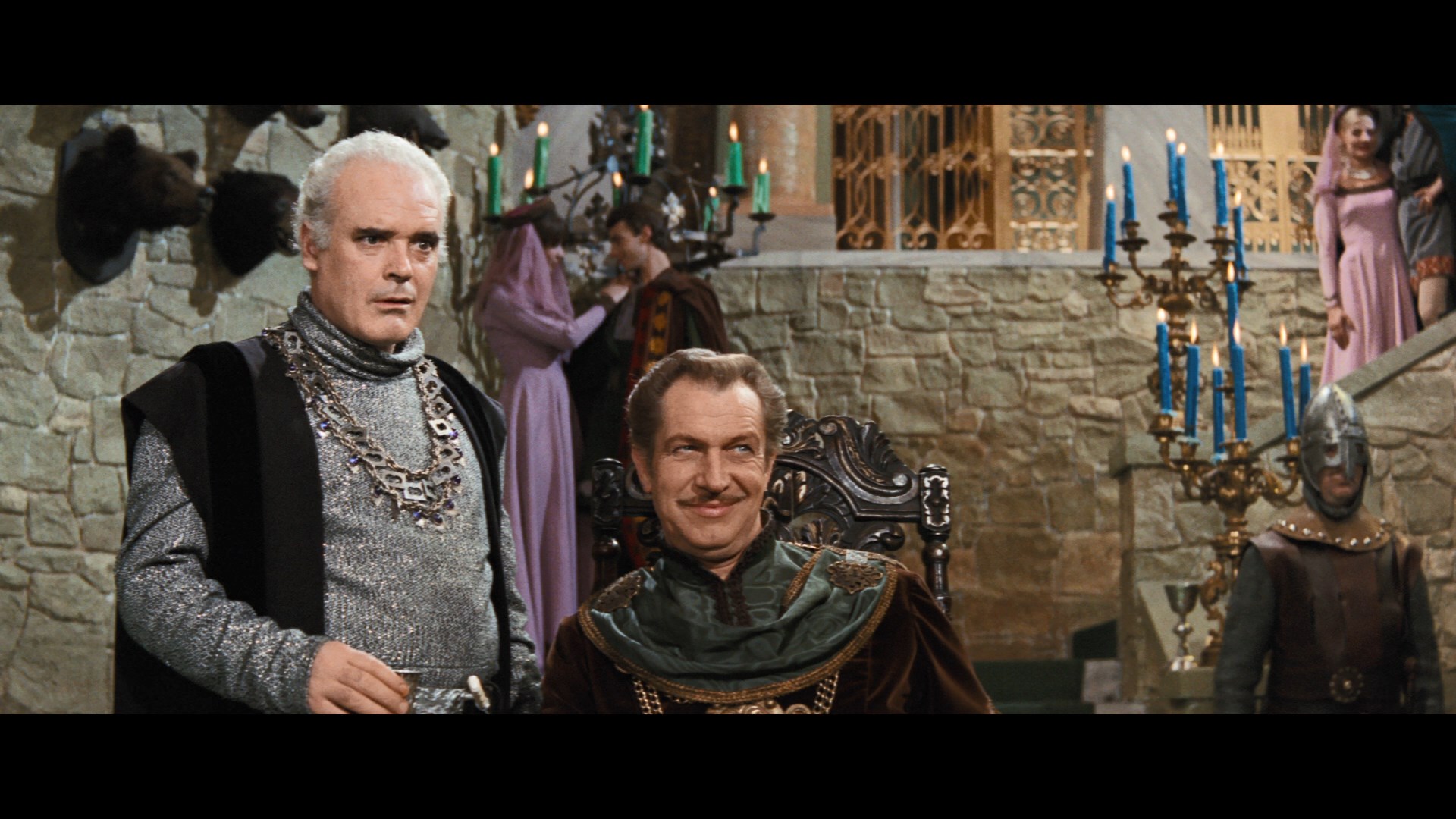 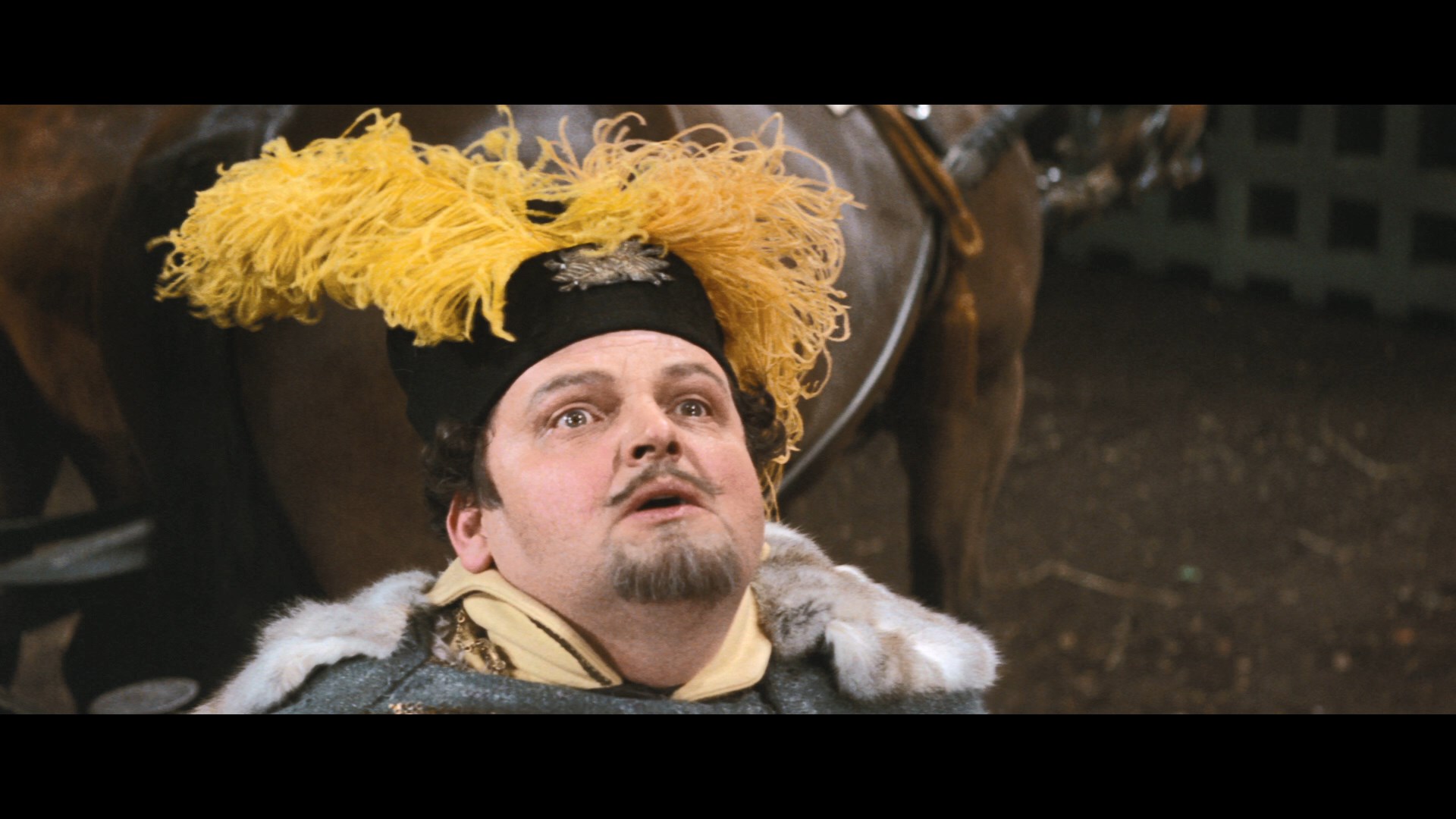 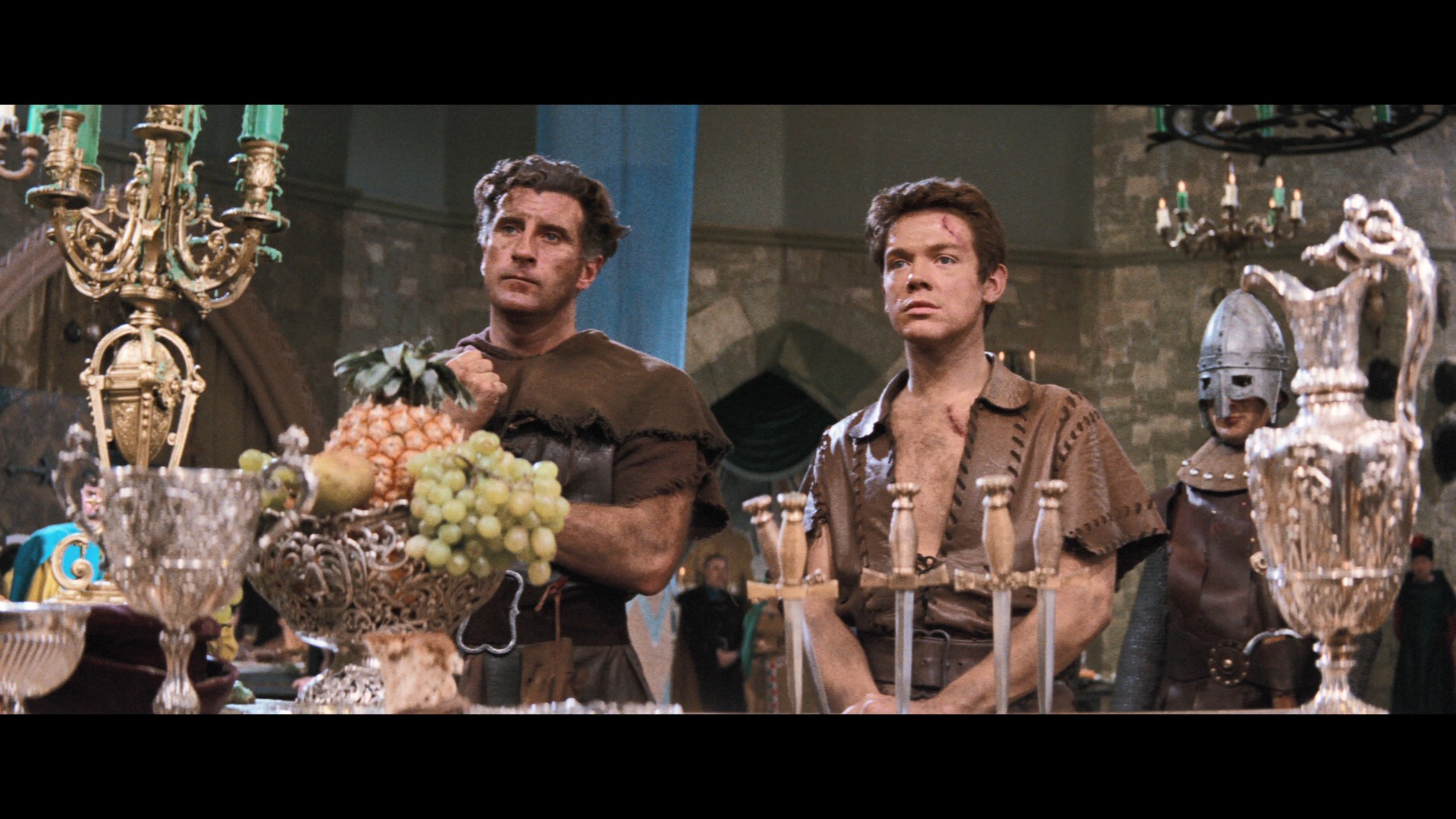 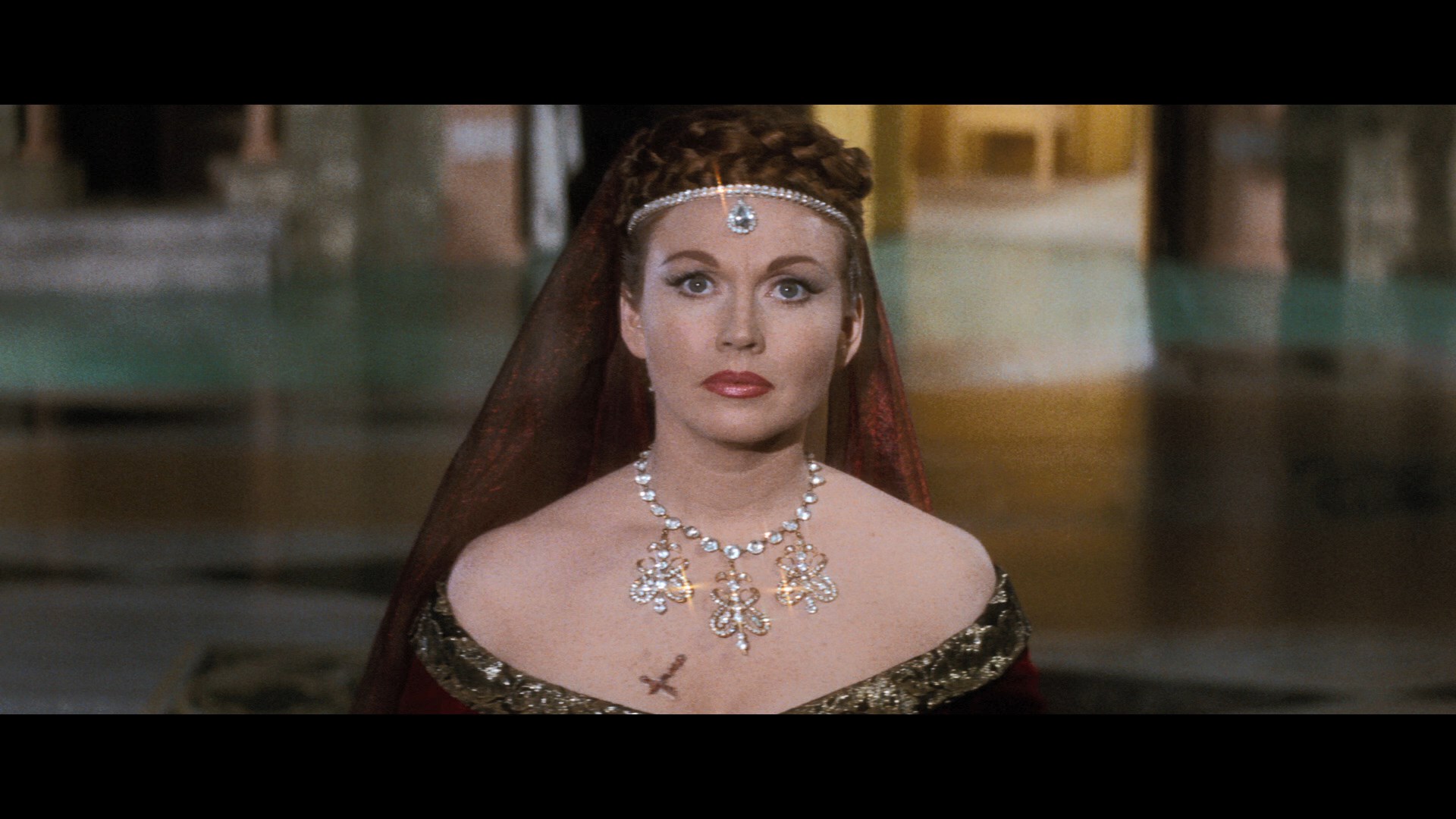