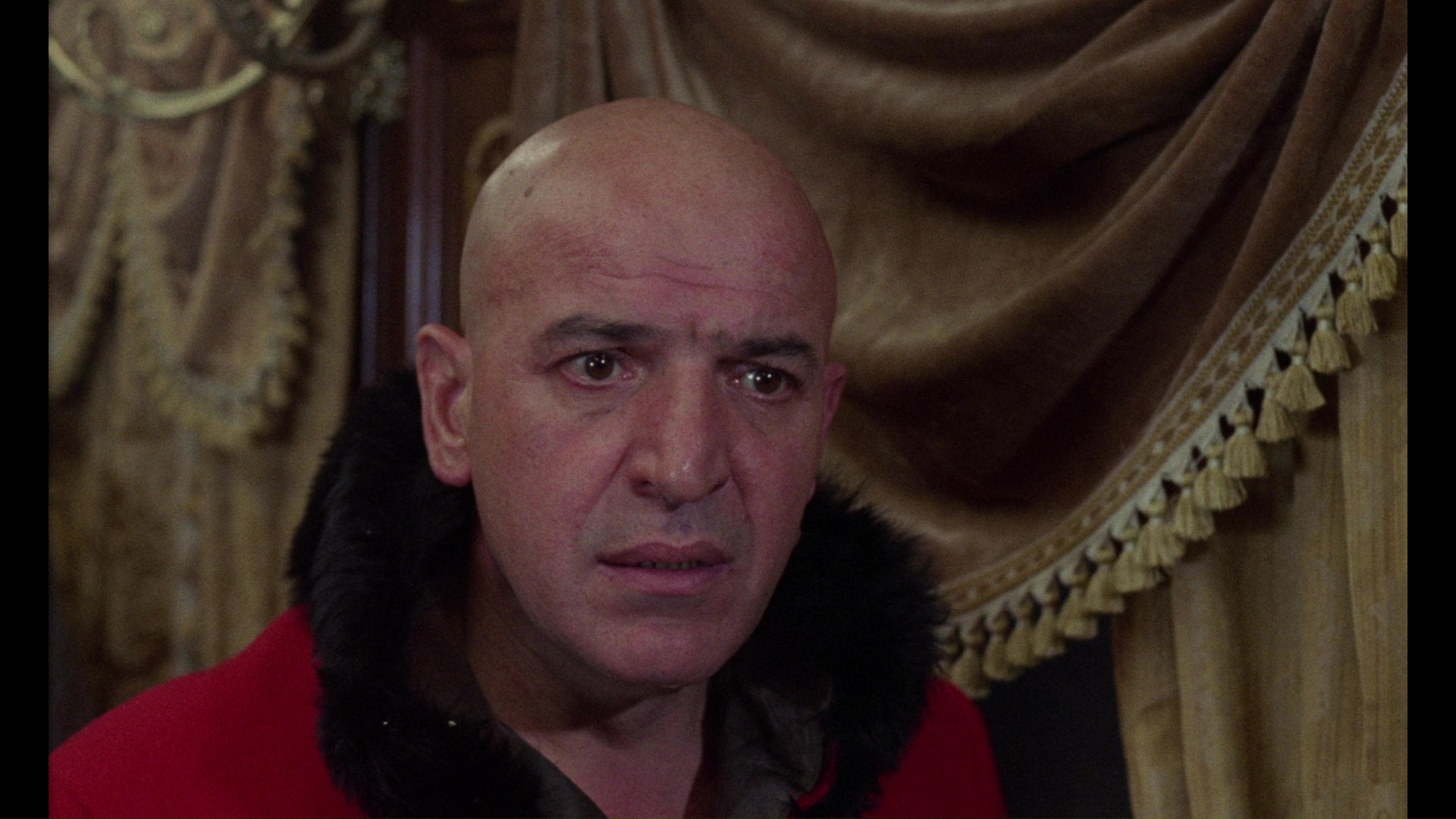 under the title of Panic on the Trans-Siberian Express, 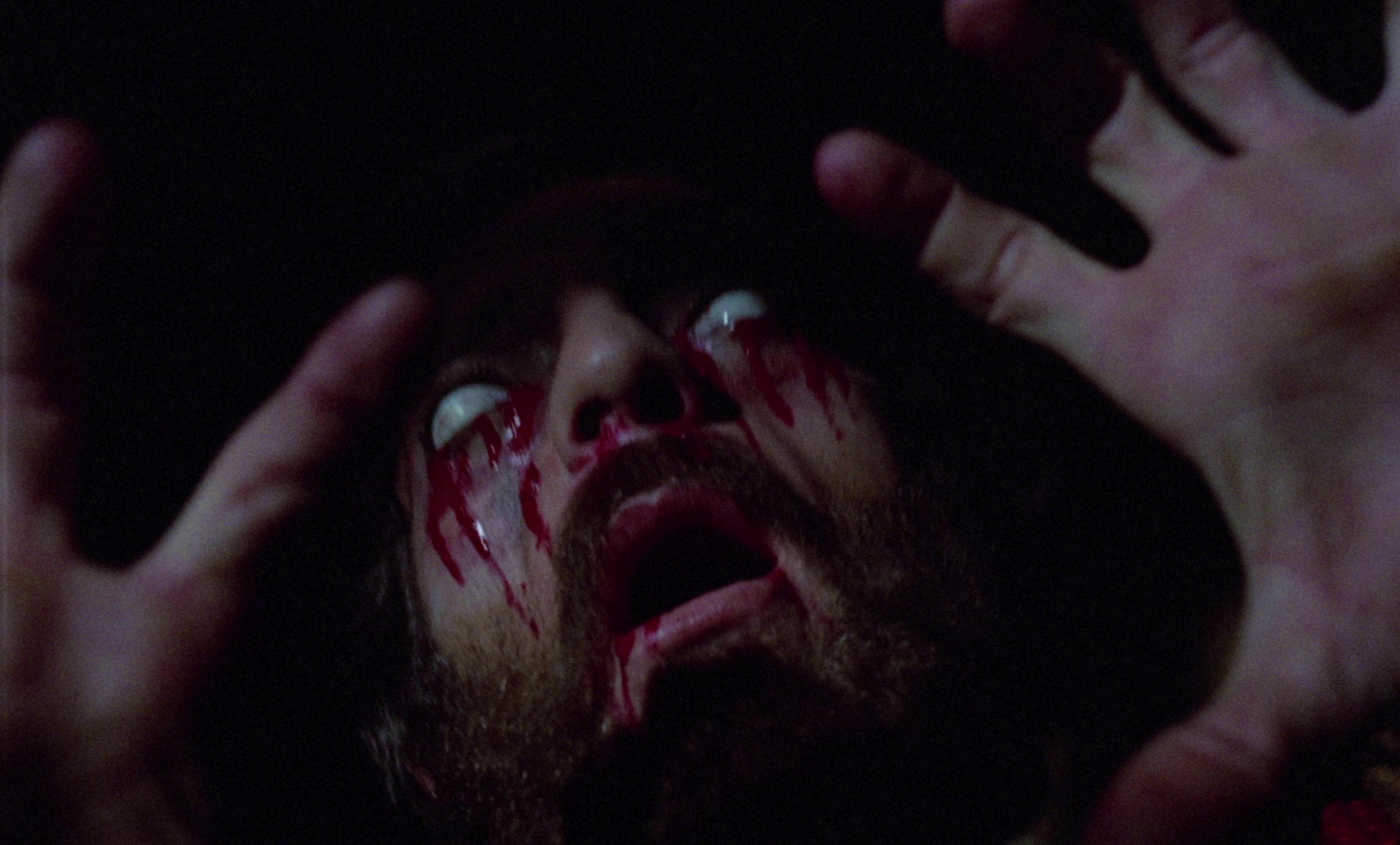 this marvelous Spanish/British co-production kicks off with a pompous English professor, Alexander Saxton (Lee), discovering a weird, hairy creature preserved in ice during an excavation in Manchuria. Believing this may be the missing link, Saxton stashes the icy fossil into a wooden crate and boards it onto his train ride back to Europe. On the same train is one of his academic rivals, Dr. Wells (Cushing), whose nosiness gets him into trouble when he bribes one of the coachmen to drill a whole into the box and see what's inside. A sinister, Rasputin-style monk notices that ordinary chalk cannot mark the creature's wooden prison and deduces that Saxton is harboring something evil aboard the train. Meanwhile, passengers begin turning up with their eyes turned completely white and their brains wiped smooth as a baby's bottom when their memories are drained. During one of his examinations, Wells comes upon a startling discovery... one which carries implications stretching beyond the boundaries of Earth.

A personal, secret favorite of late night TV fans and devoted videophiles, Horror Express is one of the most unusual and memorable outings for frequent screen pair Peter Cushing and Christopher Lee, whose friendly antagonism here makes for a memorable team indeed. The very definition of both a great popcorn movie and a "thinking man's" horror/sci-fi opus, this gem actually possesses the ability to cross over and appeal far beyond die hard fans of European horror. Directed with a skillful and stylish hand by Eugenio Martin (A Candle for the Devil), this 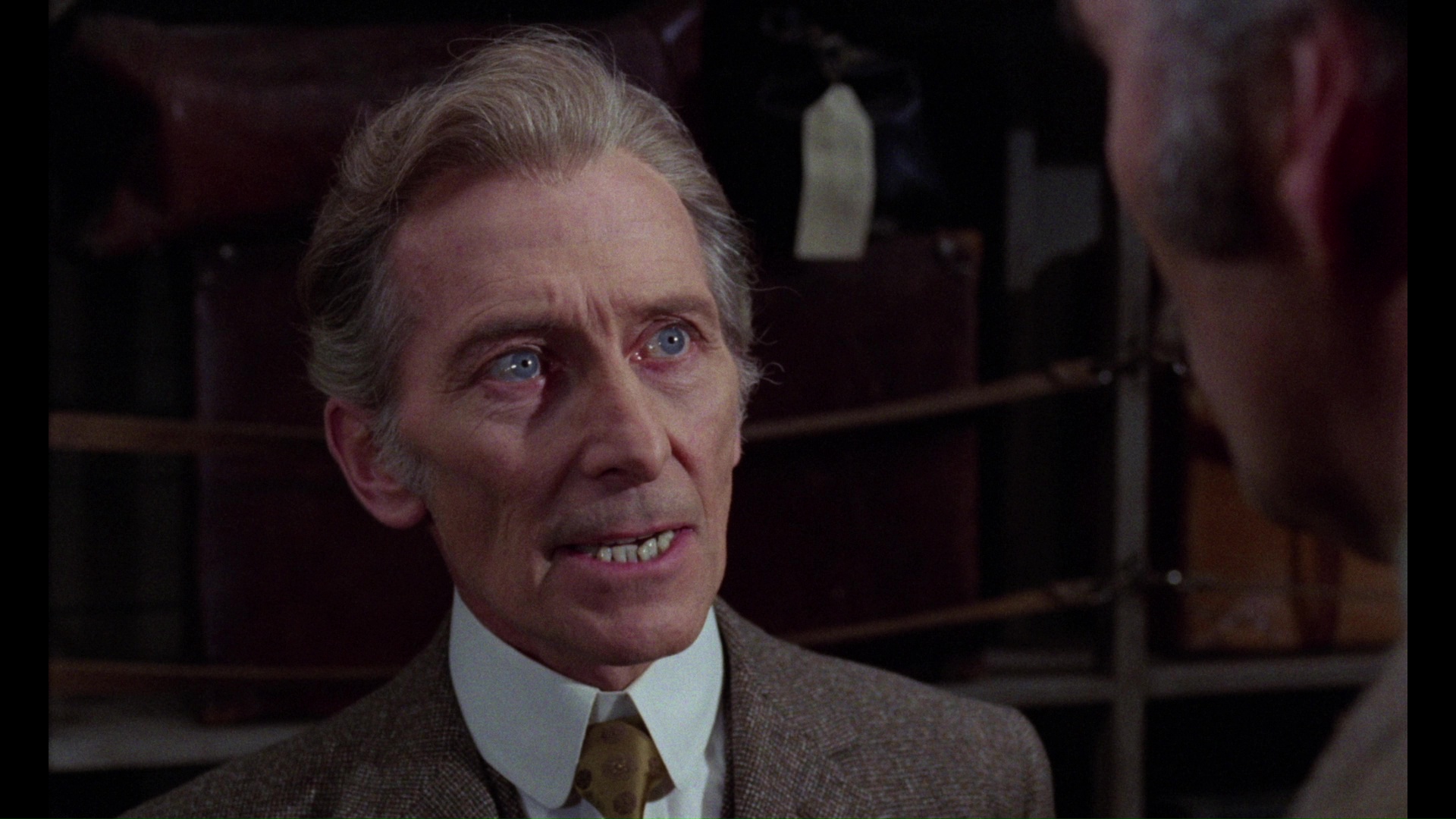 film is pure entertainment and paced as speedily as the titular vehicle crossing the icy Siberian. Apart from the two leads (both in top form), 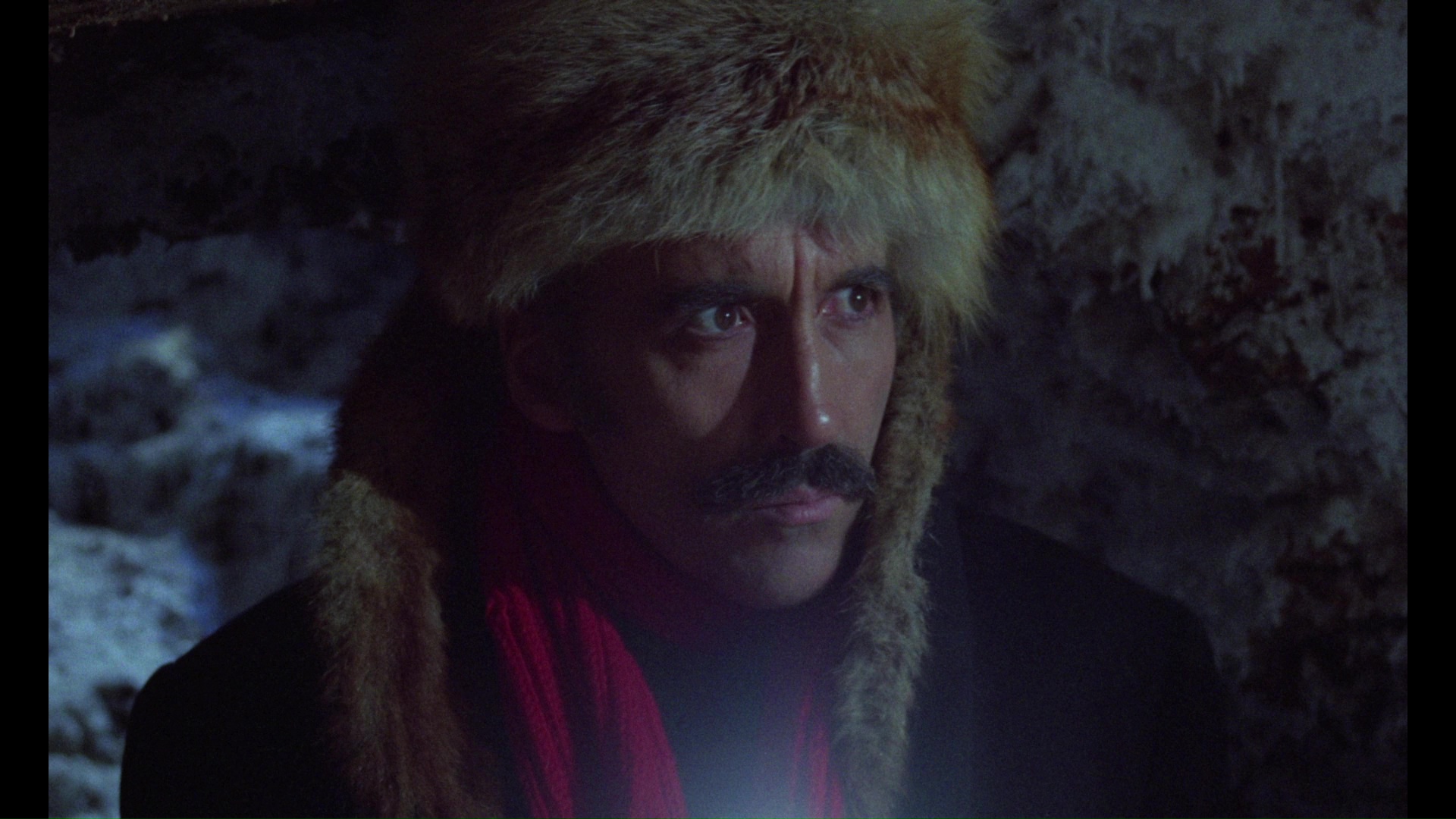 the cast includes a wonderfully game-changing third act appearance by Telly Savalas (as a Cossack!) and an all-too-brief role for beautiful Eurocult starlet Helga Liné (Black Candles). While some of the special effects are obviously dated now, it's to Martin's credit that the ferocious, scary climax still packs a wallop as the surviving passengers have to fight off both a horde of possessed zombies and a very precipitous cliff. Special mention must also be more of John Cacavas' haunting music score; once heard, that whistling theme is never forgotten.

Thanks to a legal snafu involving the American distributor, Horror Express fell into the public domain for decades and has been available from a number of different labels in shoddy, scratchy editions, often taken from censored TV prints. One of the worst of these offenders was Simitar's DVD edition, one of the first titles to hit the market and a complete disaster from start to finish. Image rectified the problem in 2000 with their drastically improved (for the time) non-anamorphic letterboxed DVD, which 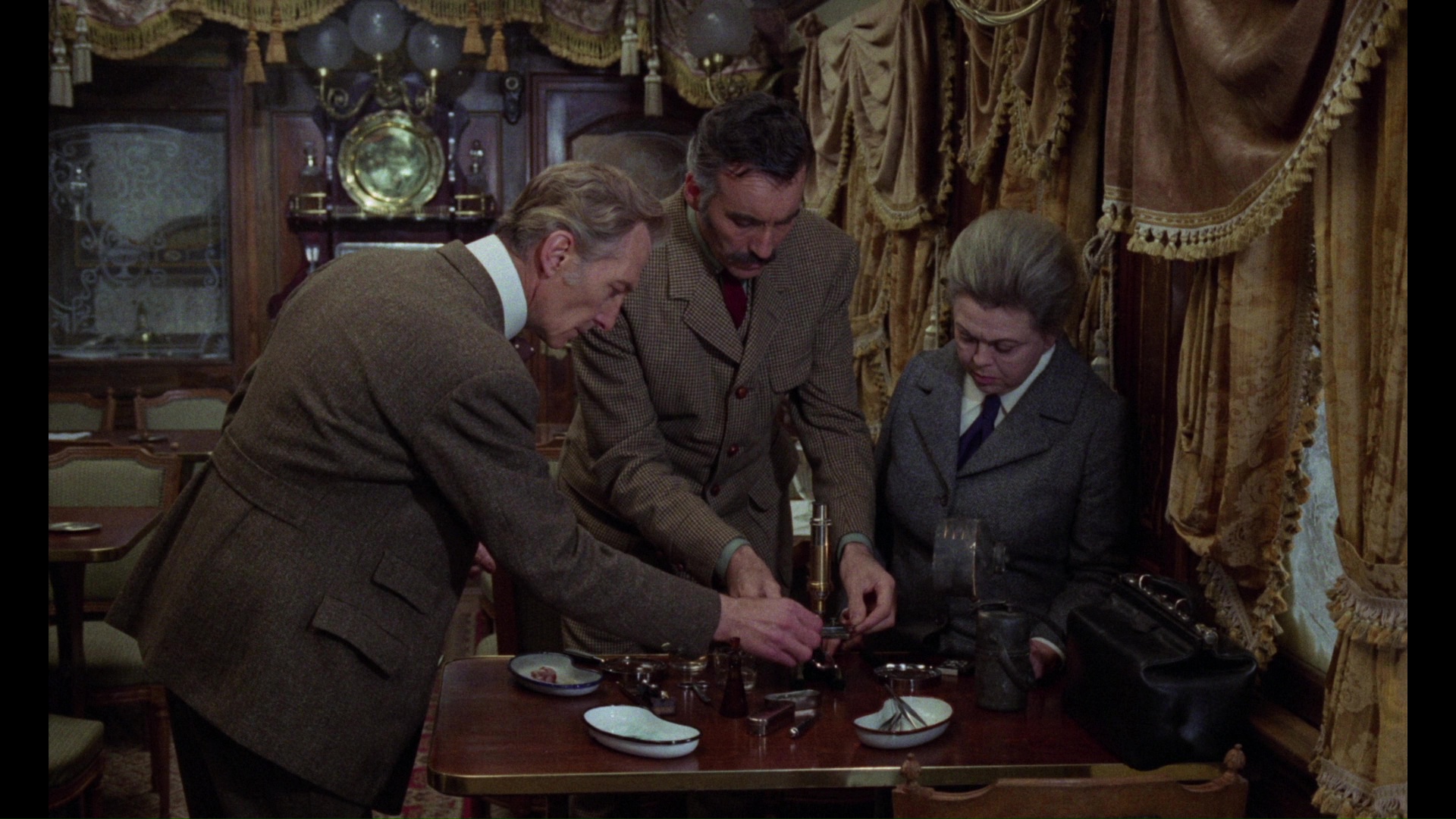 also offers a few other tidbits: an alternate Spanish language track (with some very different studio dubbing); a most welcome isolated music and effects track, all the better to savor the film's creepy sound design; and thorough, informative liner notes detailing the production's amusing history. Several subsequent cheapo editions came out after this one as well, all of them unsatisfying. 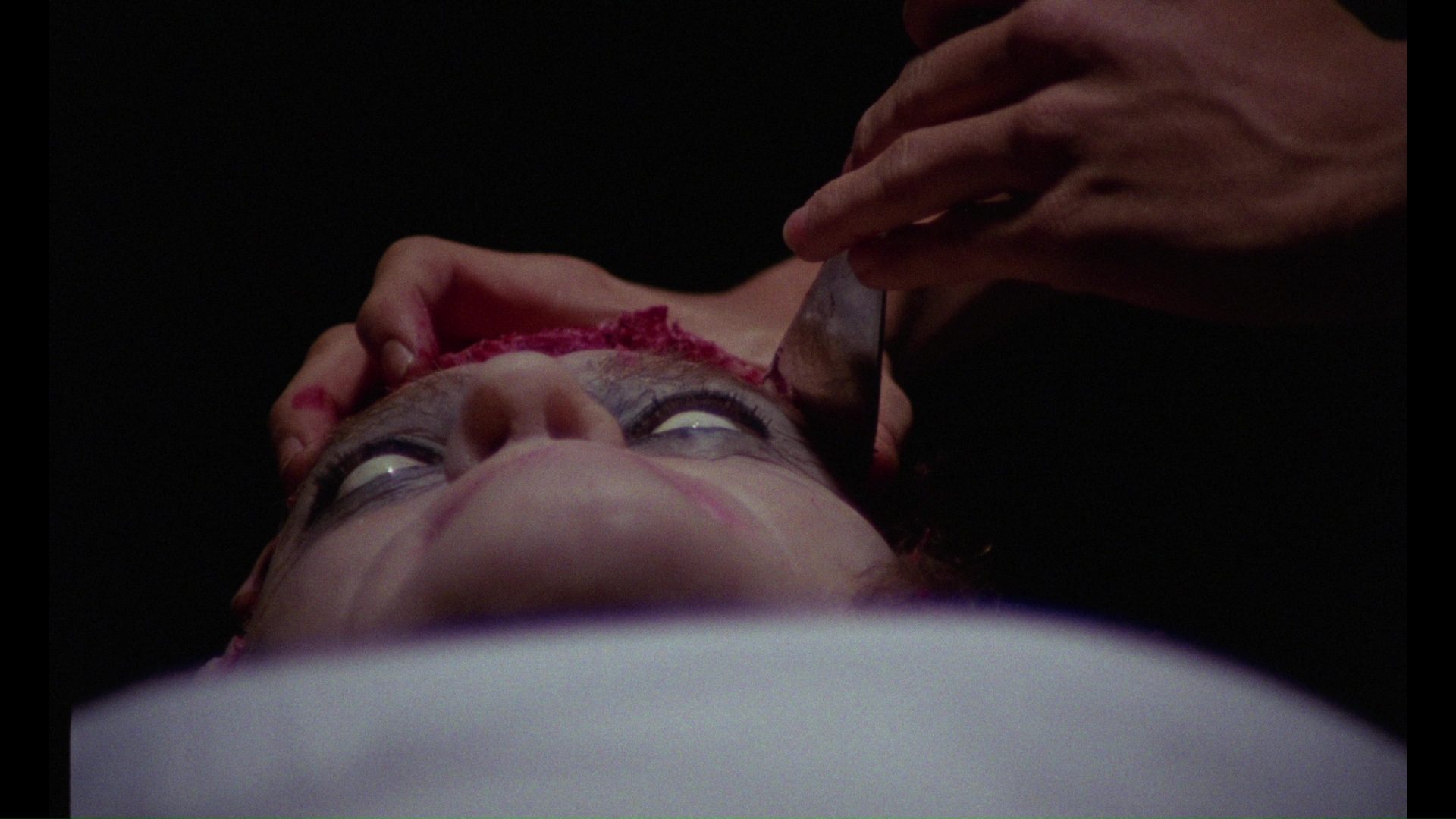 Severin's Blu-ray release in 2011 (also available on DVD in the same combo pack, but why not go for maximum clarity?). Transferred from the original Spanish negative, it doesn't appear to have undergone much processing or clean up; colors are vivid and even startling inside some of the velvety train interiors, and there's only a small amount of debris (mainly during the opening credits). The framing also looks accurate throughout. On the other hand, this was one of Severin's earlier Blu-ray efforts and suffers from some compression issues that give it a chunky, unnatural look when it comes to the grain and movement involving the actors. Interestingly, this version contains the original Spanish opening credits (not a surprise) but also contains an on-screen shot of the train before the opening credits begin, which played out in complete darkness in the American version. Even more obvious is the restoration of the original end credits, which scroll as originally intended rather than the abrupt cut to black and long musical play out from the more 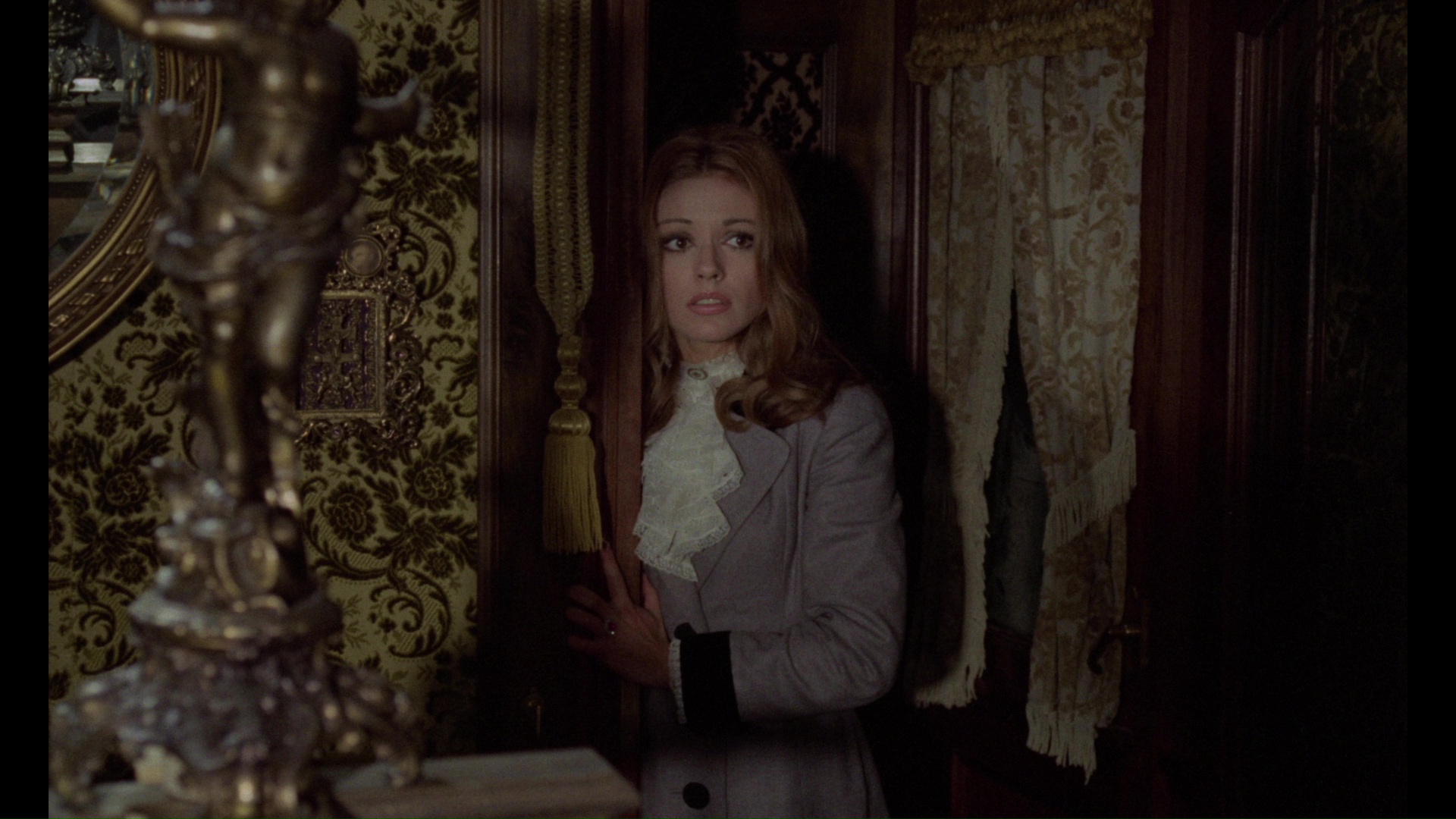 widely-seen US cut. All of the gore is intact here including all the cranial sawing and eyeball puncturing, a likely attempt to compete with the increasingly graphic Hammer films of the period. Audio options in lossy Dolby Digital include the English and Spanish tracks (the latter listed as stereo, but it sounds pretty mono until the end credits) as well as an 80-minute 1973 Peter Cushing interview with an audience in which he discusses his acting career in great detail. Topics include working with Terrence Fisher, his friendship with Christopher Lee, and an odd detour into the making of I, Monster. Video extras begin with a B&W video intro by Fangoria editor 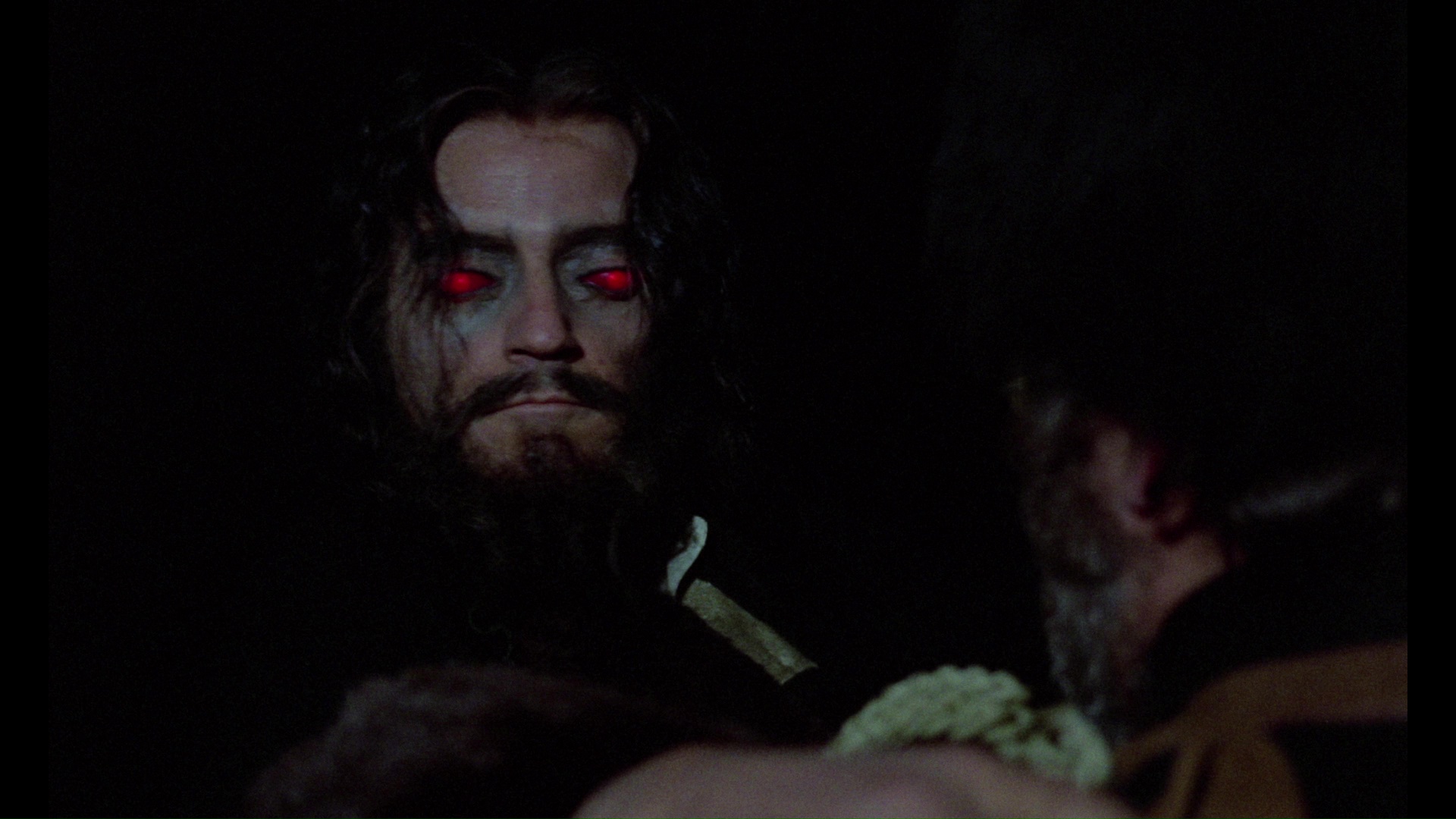 Chris Alexander (6m50s), followed by a new HD video interview with Martin, "Murder on the Trans-Siberian Express" (13m59s), in which he talks about the genesis of the idea for the film, his methods of creating a lush visual texture on a limited budget, and a correction to the oft-repeated story about how Cushing (whose wife had just died before filming) was enlisted to remain for the film by his friend Lee. His accent is pretty thick at times, so turn your volume up. The lengthy and very detailed next interview, "Notes from the Blacklist" (30m30s), features the late producer Bernard Gordon, who goes through the process of blacklisting in the '50s, the making of 55 Days at Peking (which he wrote), and much more. "Telly and Me" (8m4s) is a fun video interview with Cacavas, who got his big break as a film composer through Savalas, arranged two of his albums (including an inexplicably popular spoken version of "If"), and went on to become the regular composer for the TV series Kojak. He also speaks warmly of his score for this film and the positive reception it received from everyone involved. Cacavas passed away three years after this was recorded, so it's a poignant preservation of his thoughts on his career definitely worth seeing. The disc rounds out with the original English-language theatrical trailer and bonus trailers for Psychomania, The House that Dripped Blood, and Nightmare Castle. Subsequent 2017 Blu-rays from Japan (very pricey and difficult to obtain) and Germany worked off the same master with a more proficient compression job; the latter also features the German Super 8 version (15m32s), the German trailer, and a bonus trailer for Thirst. 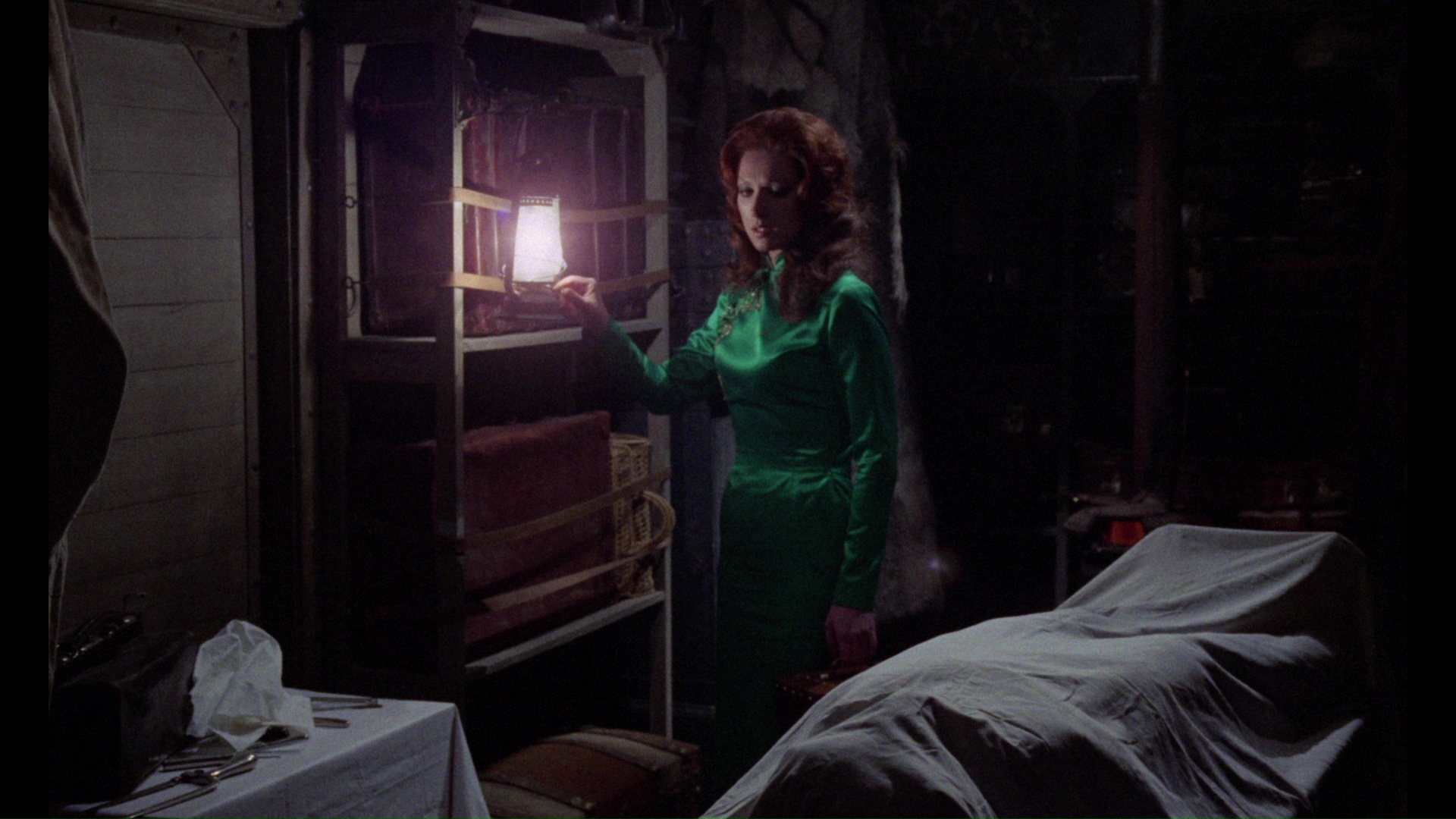 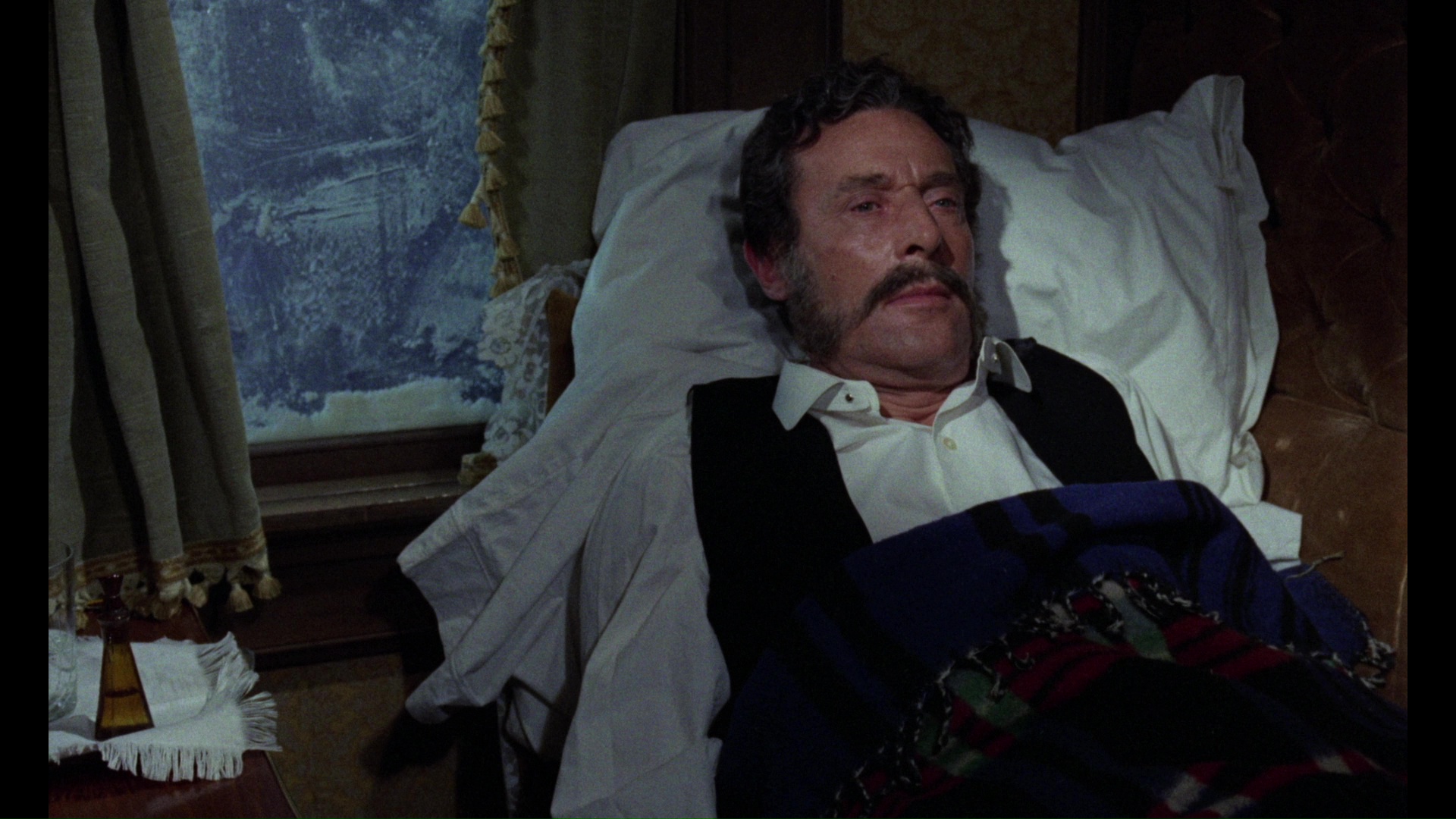 In 2019, Arrow Video offered the film with its first fresh scan in several years, and the difference is quite a significant improvement with much finer film grain, added detail, and a more natural color shift away from the orange cast on the earlier Blu-rays (closer to the cooler look on the Image DVD). The train interiors in particular look much richer with fabrics and glass patterns registering more strongly, and the dark scenes are more atmospheric by a fair margin. (Frame grabs in the body of this review are from the Arrow; comparison ones can be seen below.) The usual English LPCM track is included here, sounding quite nice, with optional English SDH subtitles. The master for this 2K-sourced presentation features the English opening credits and Spanish ones at the end. Ported over from the Severin disc are the "Murder on the Trans-Siberian Express," "Notes from the Blacklist," and "Telly and Me" featurettes, the Alexander intro (playable before the film), and the theatrical trailer, so hold on to the older one if you still want the Cushing audio interview. A new audio commentary with Stephen Jones and Kim Newman takes an appreciative tour through the making of this film including the people behind it, the status of Spanish horror cinema at the time, the differences in Lee and Cushing's acting approaches, and the ambitious, rich nature of the film somewhat camouflaged by its most familiar English title. "Ticket to Die" with screenwriter Steve Haberman (8m31s) examines the film in the context of '70s horror films in the wake of Hammer and as part of Martin's filmography, with some fun thoughts on the contrasting functions and styles of the three leading men as well as the clever use of only two train cars for the shoot. Then filmmaker Ted Newsom turns up for "Night Train to Nowhere" (15m8s) focusing on the role of Gordon, whom he knew, including his career up to this film, the challenges of keeping Cushing involved after the death of his wife, the challenge of booking indie films, and the narrative debt to "Who Goes There?" The package also comes with a reversible sleeve featuring a new design by Graham Humphreys and, in the first pressing only, an insert booklet with liner notes by Adam Scovell. 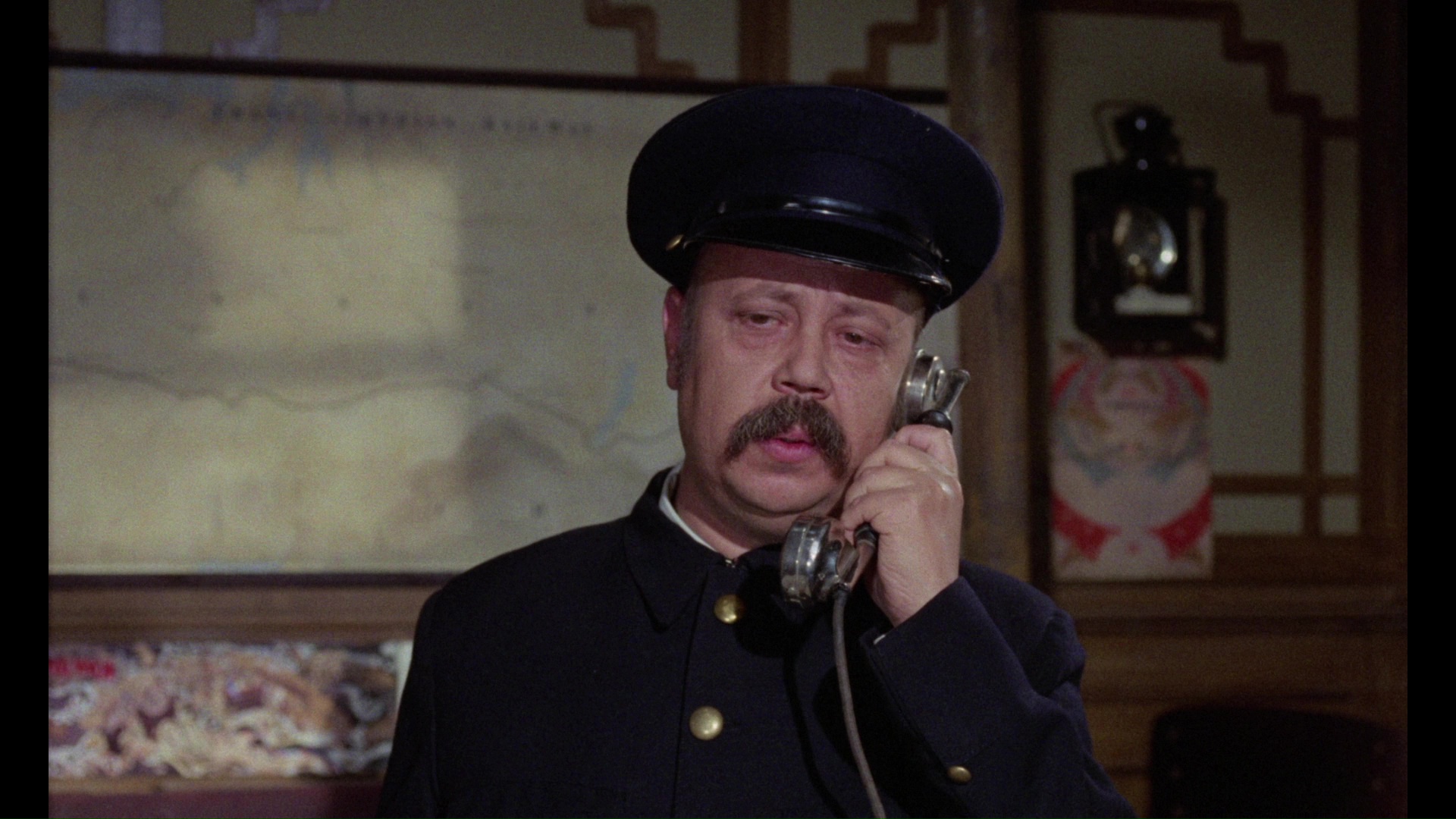 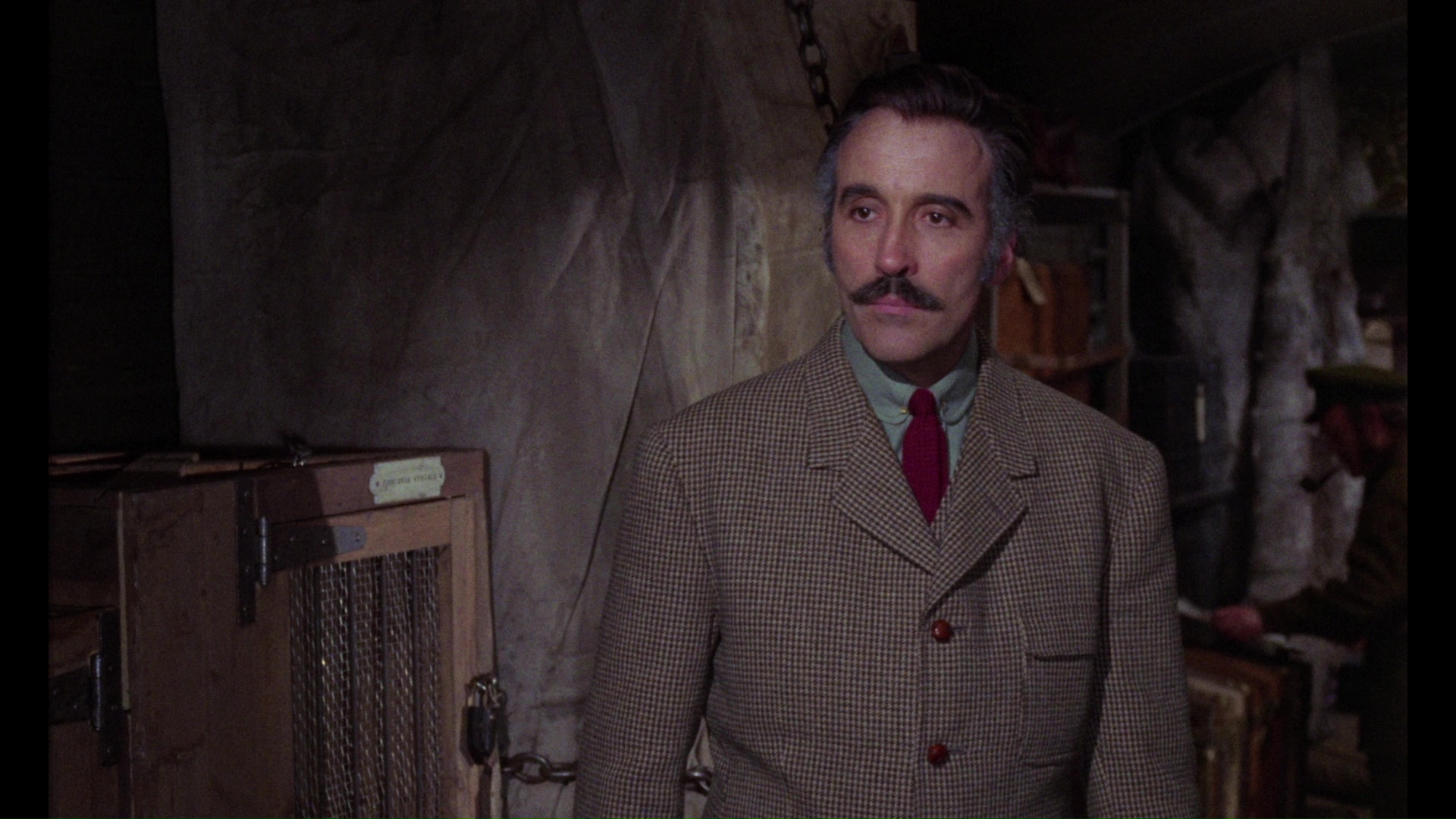 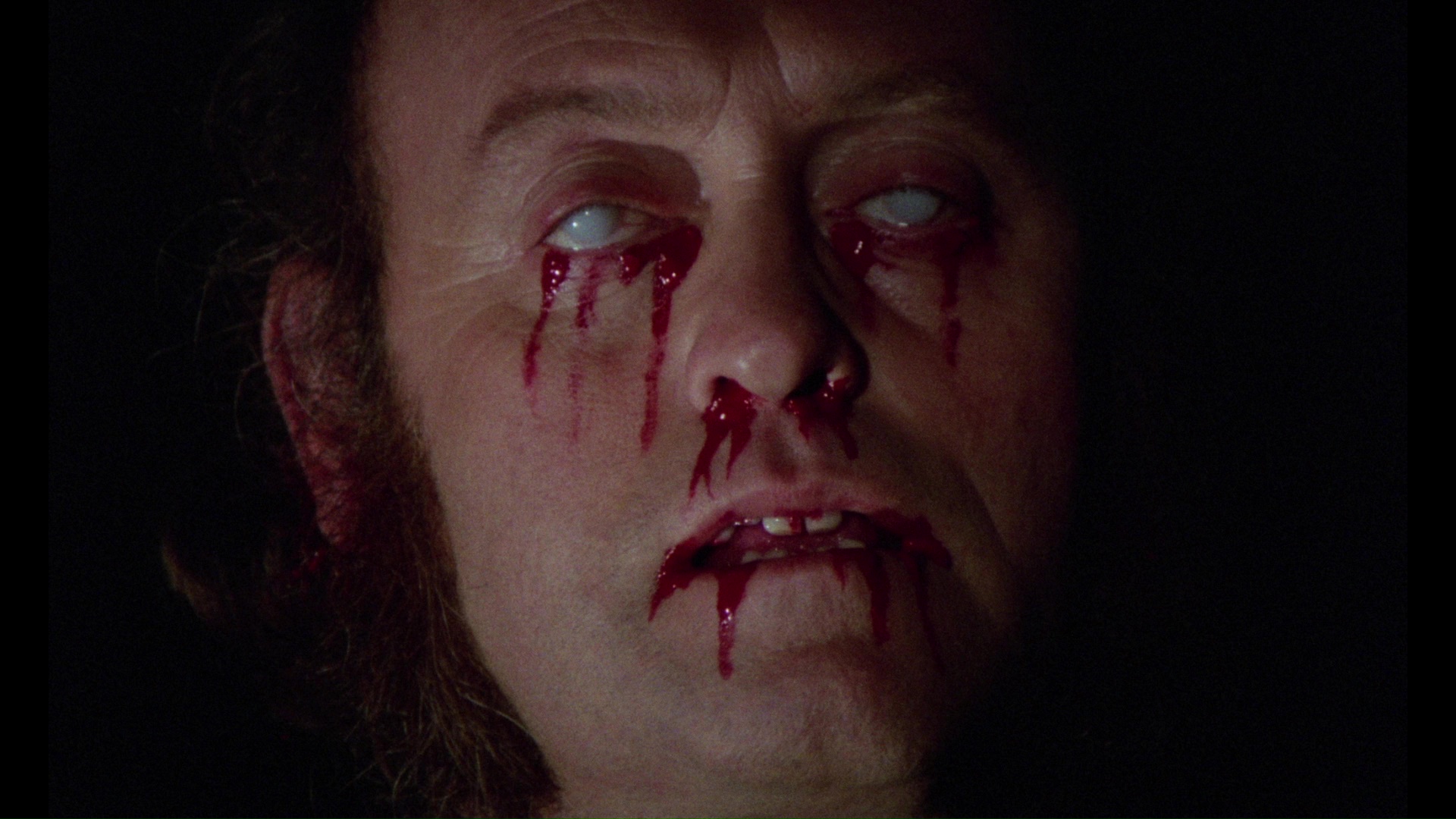 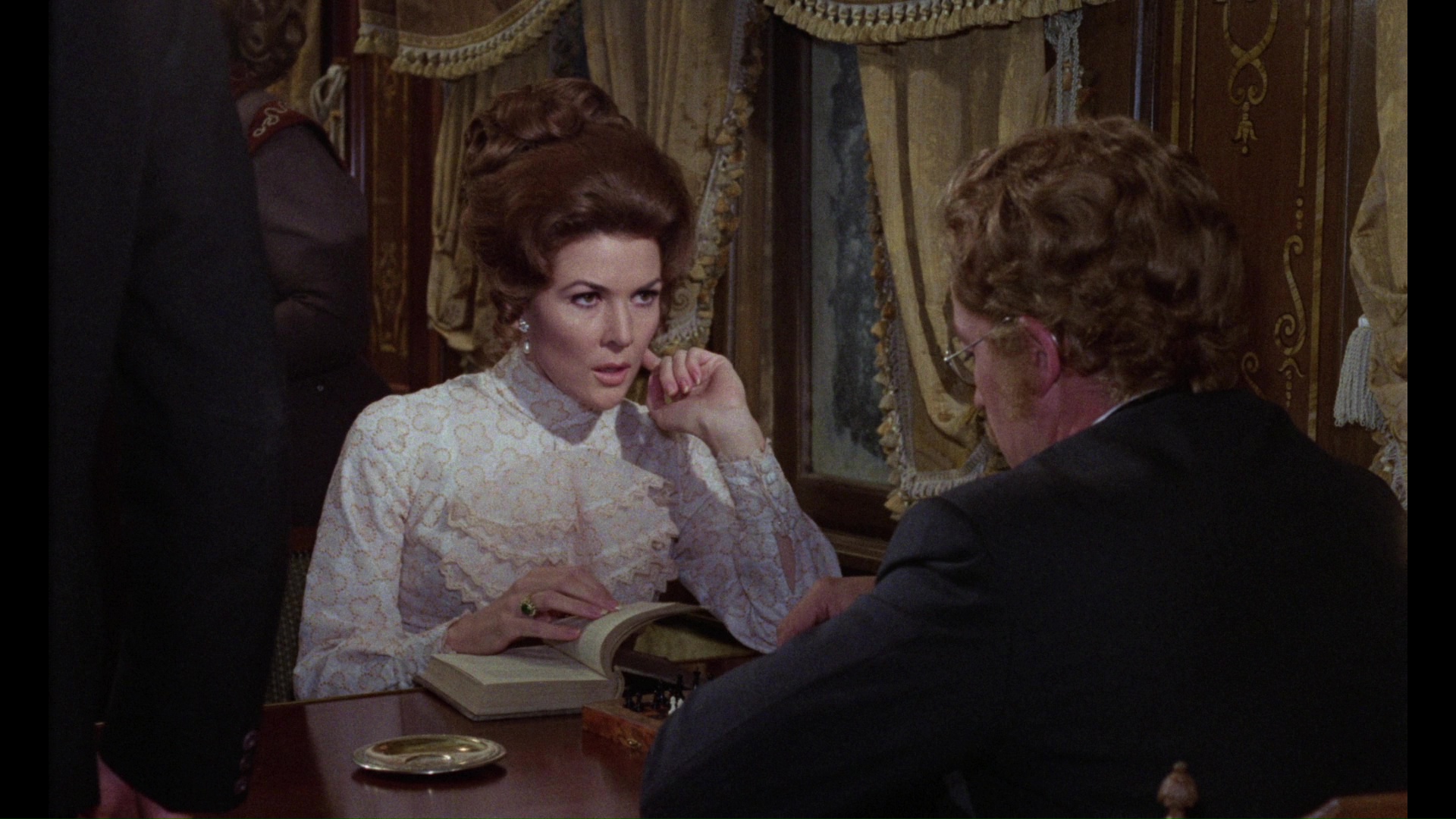 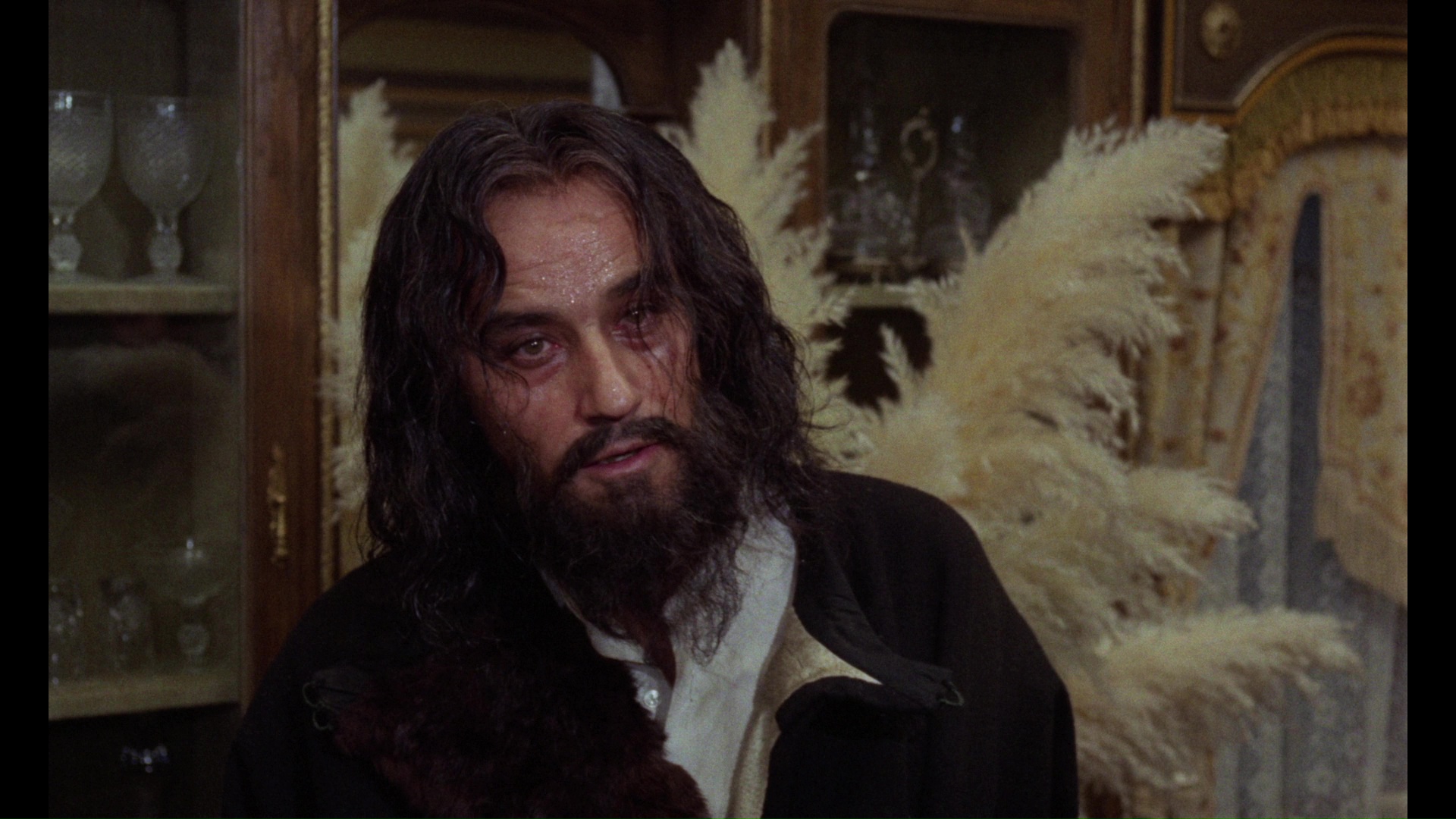 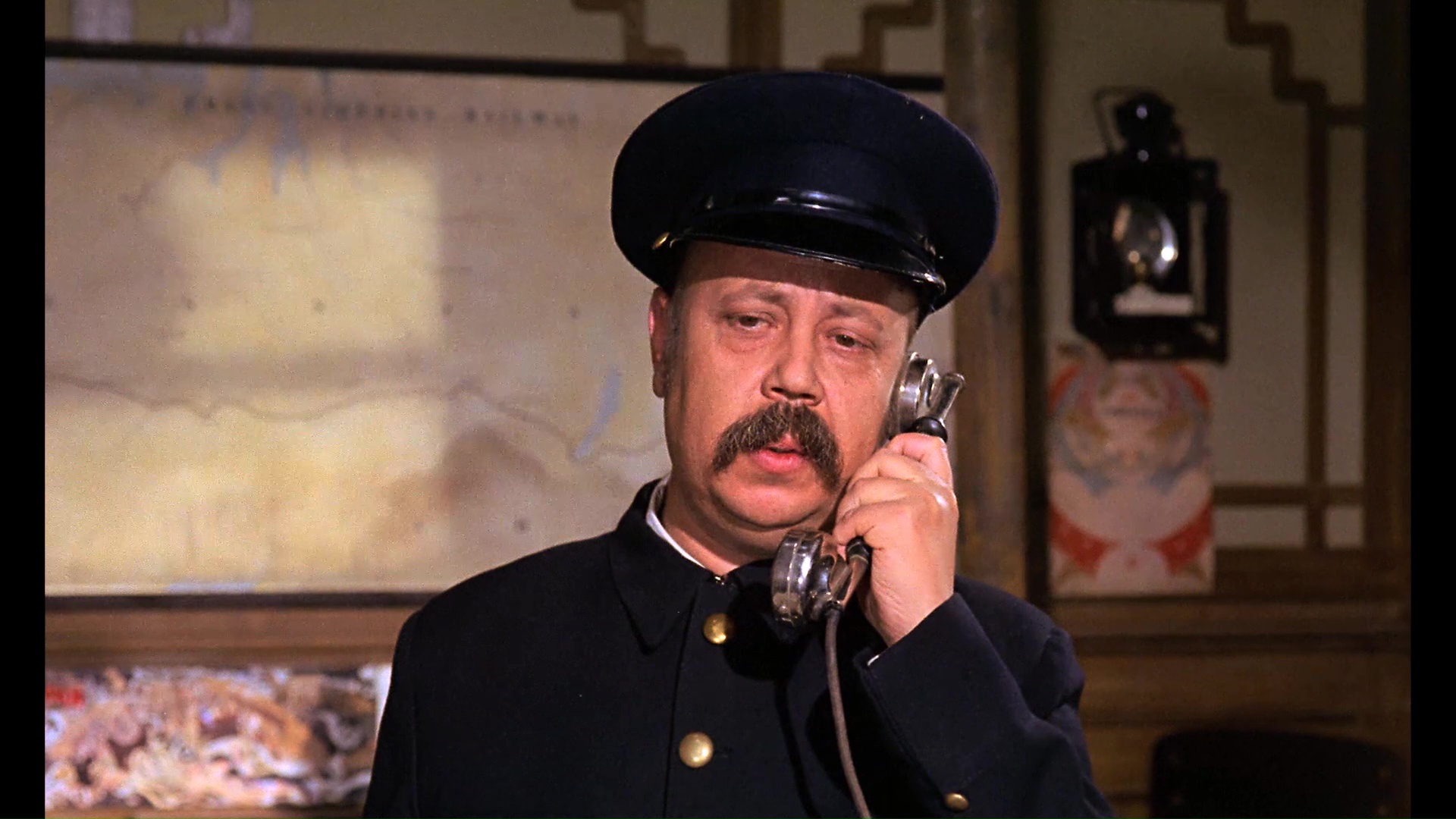 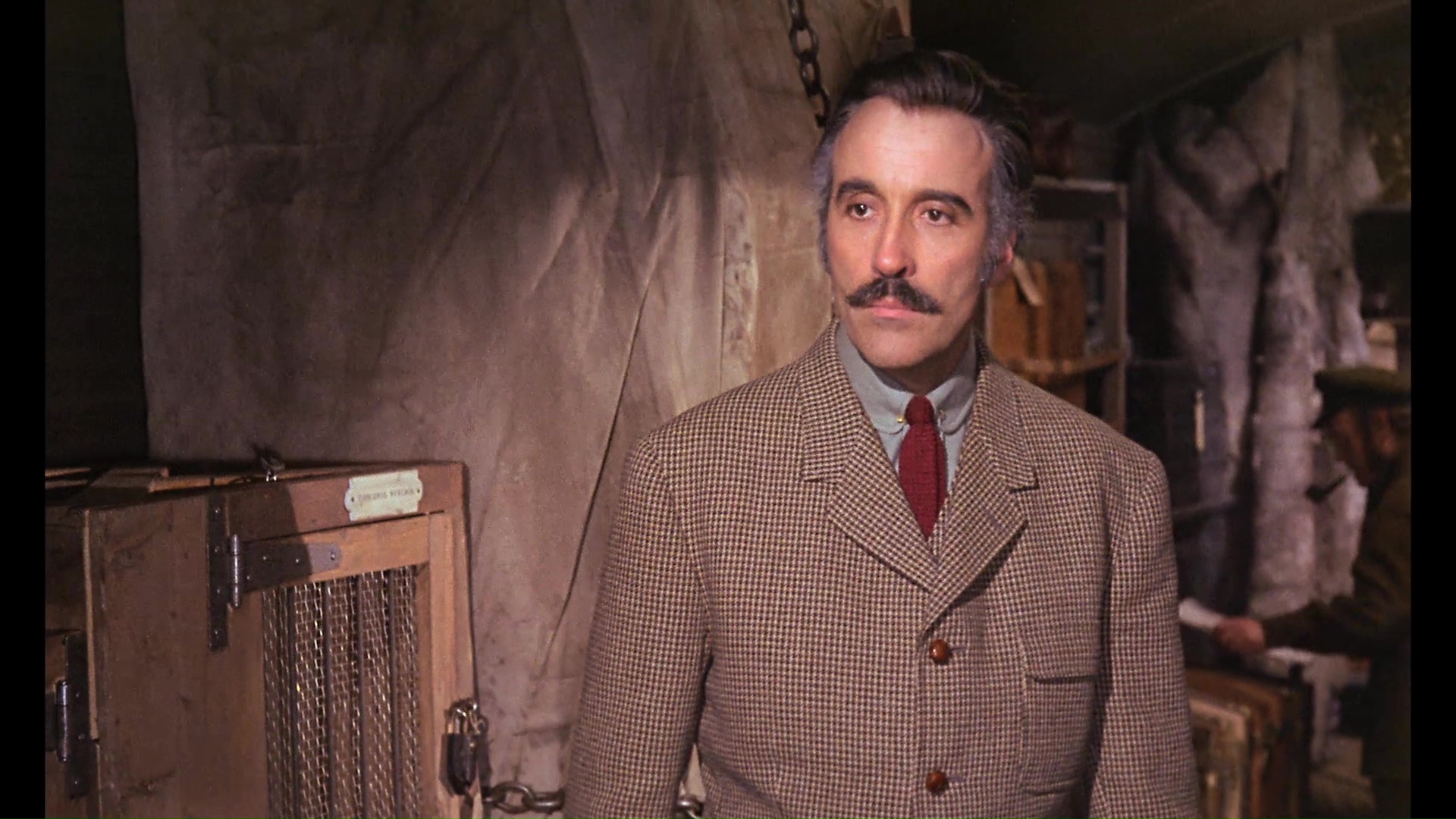 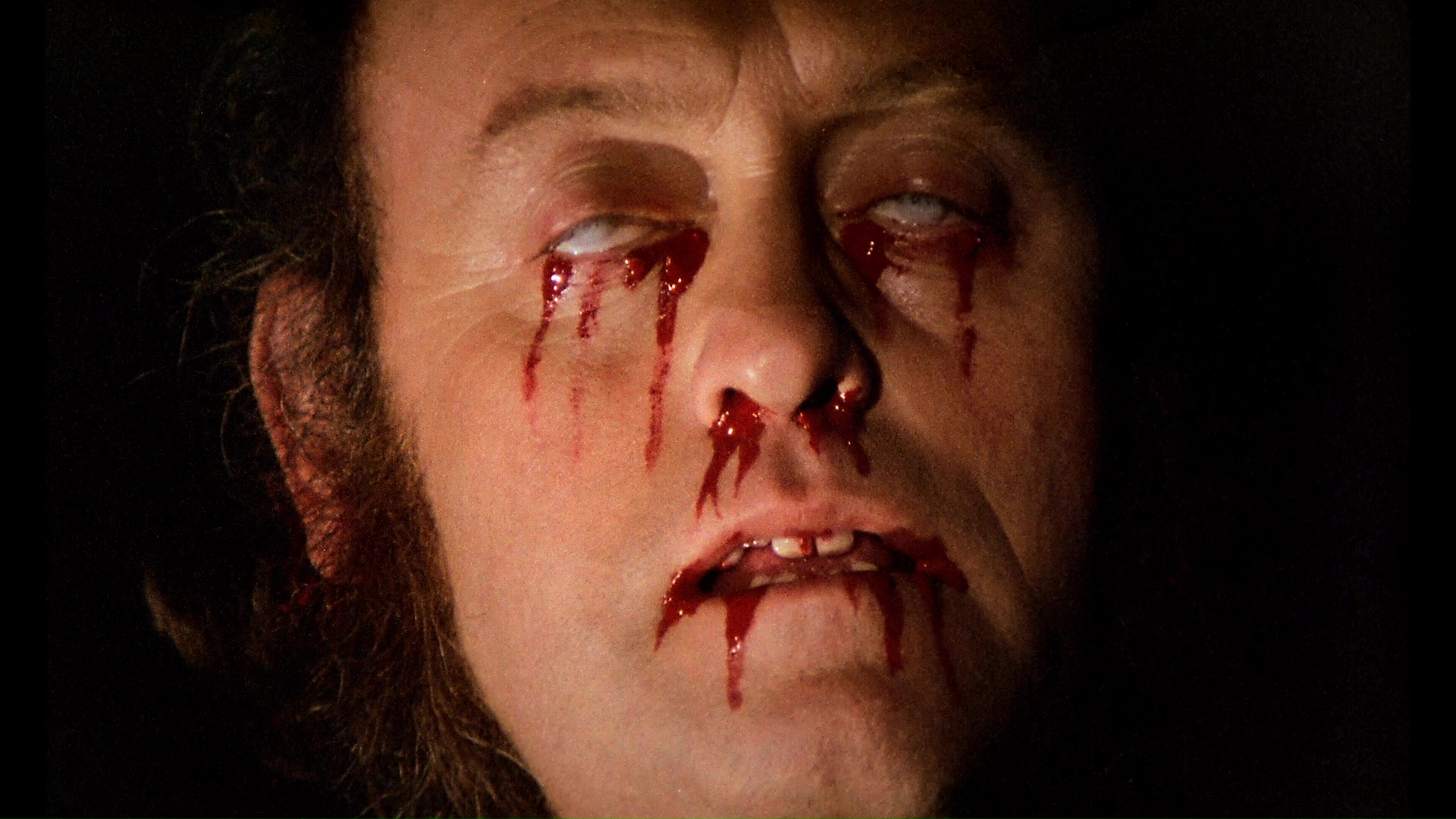 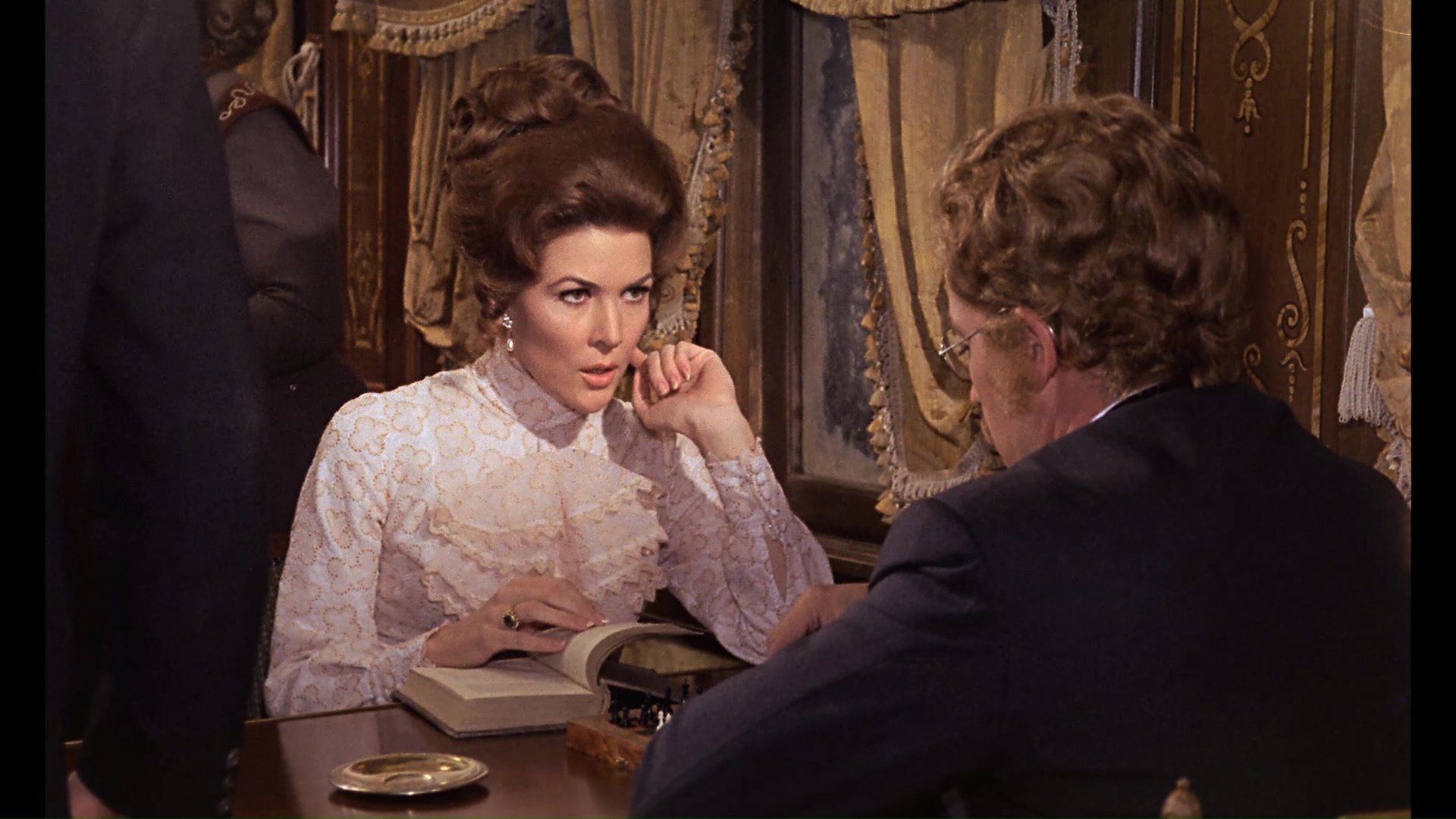 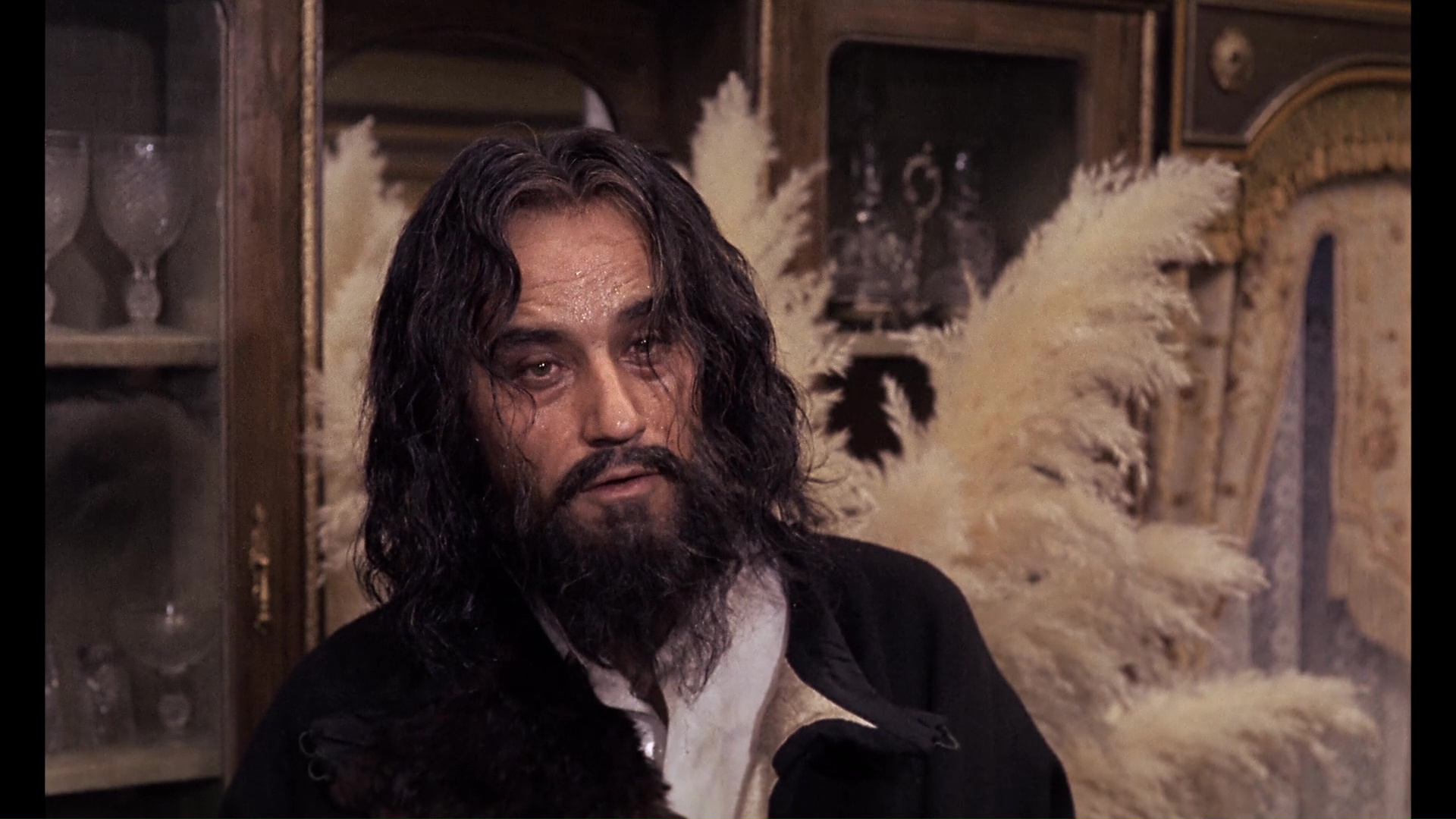 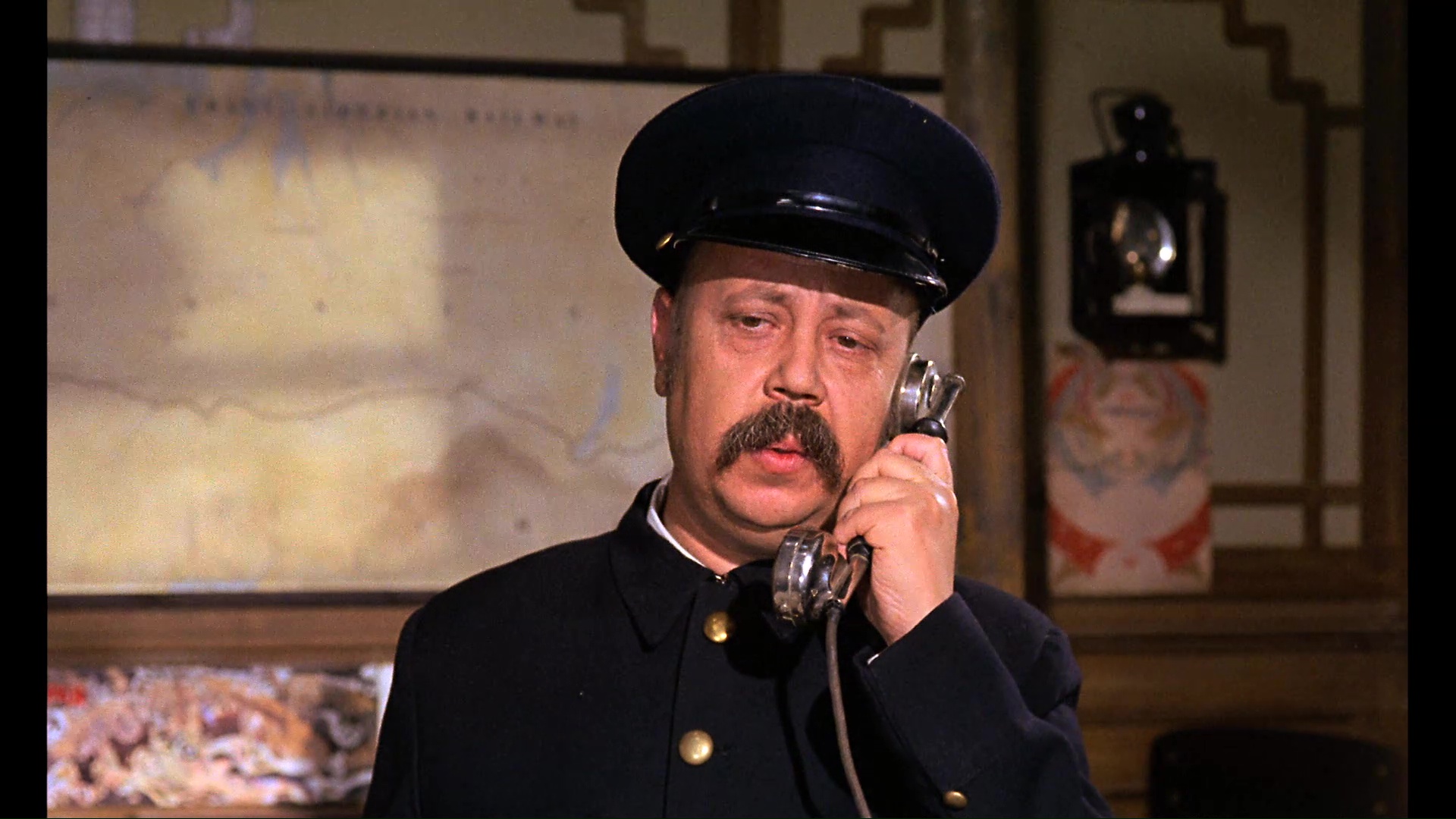 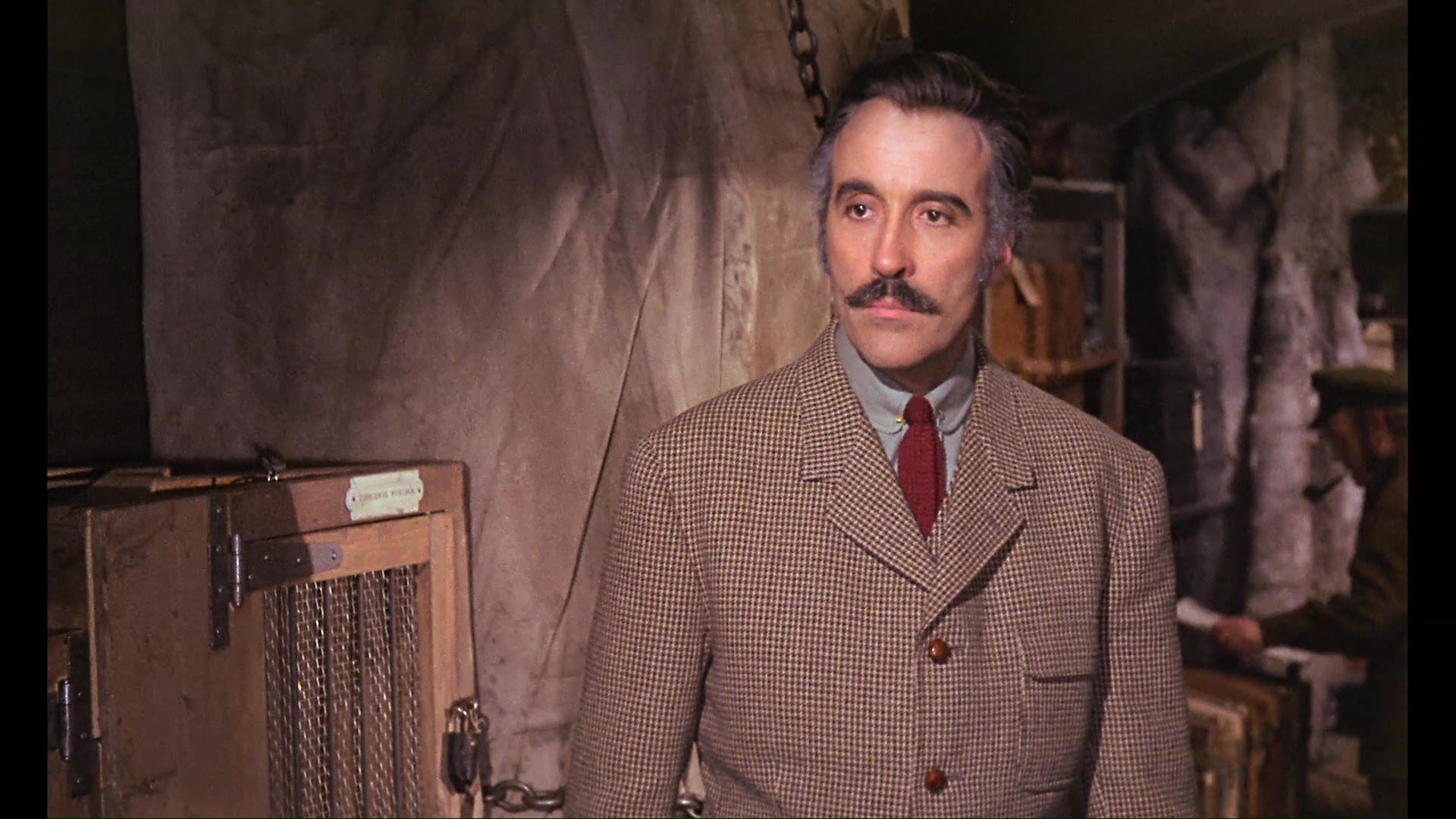 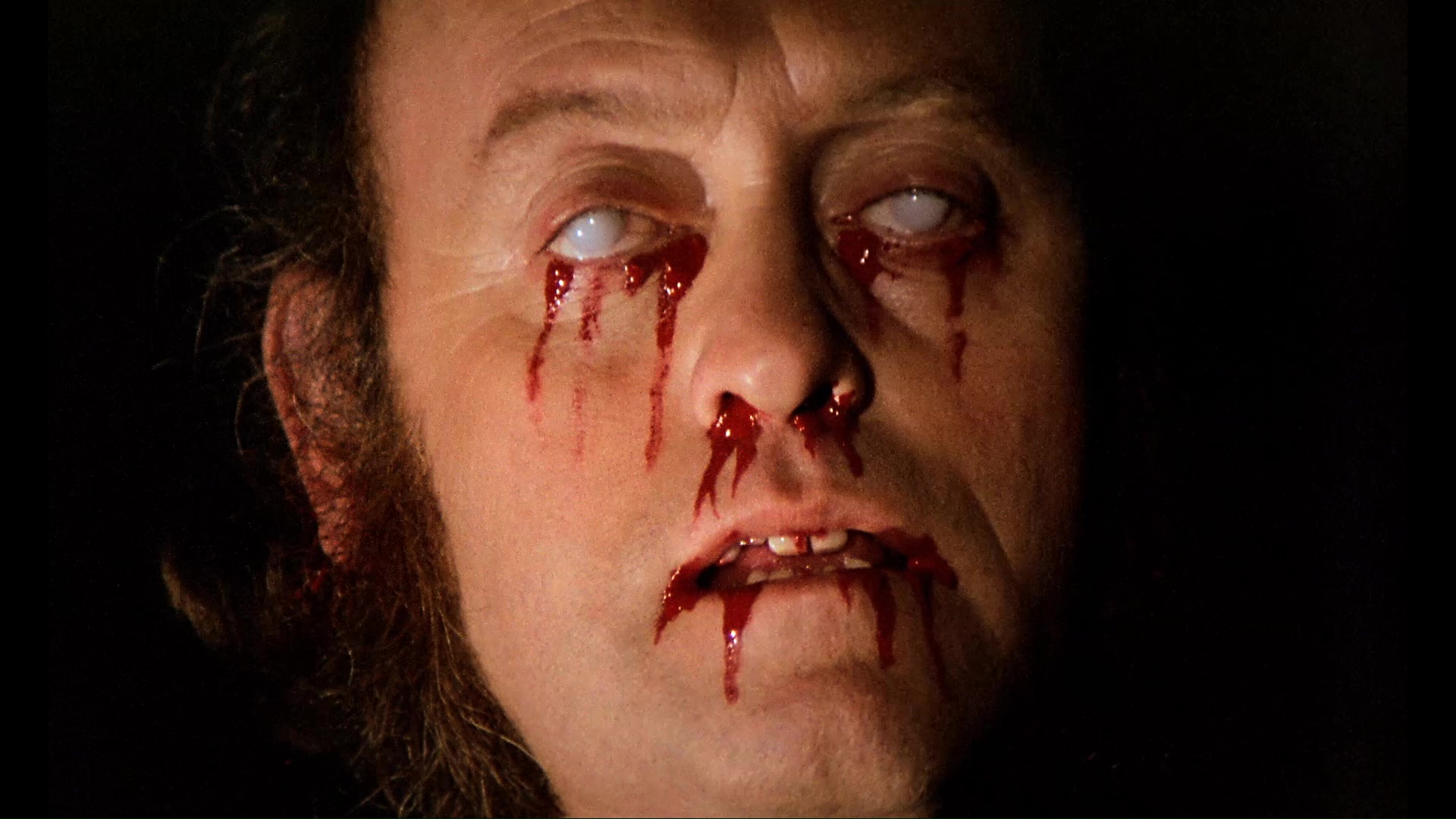 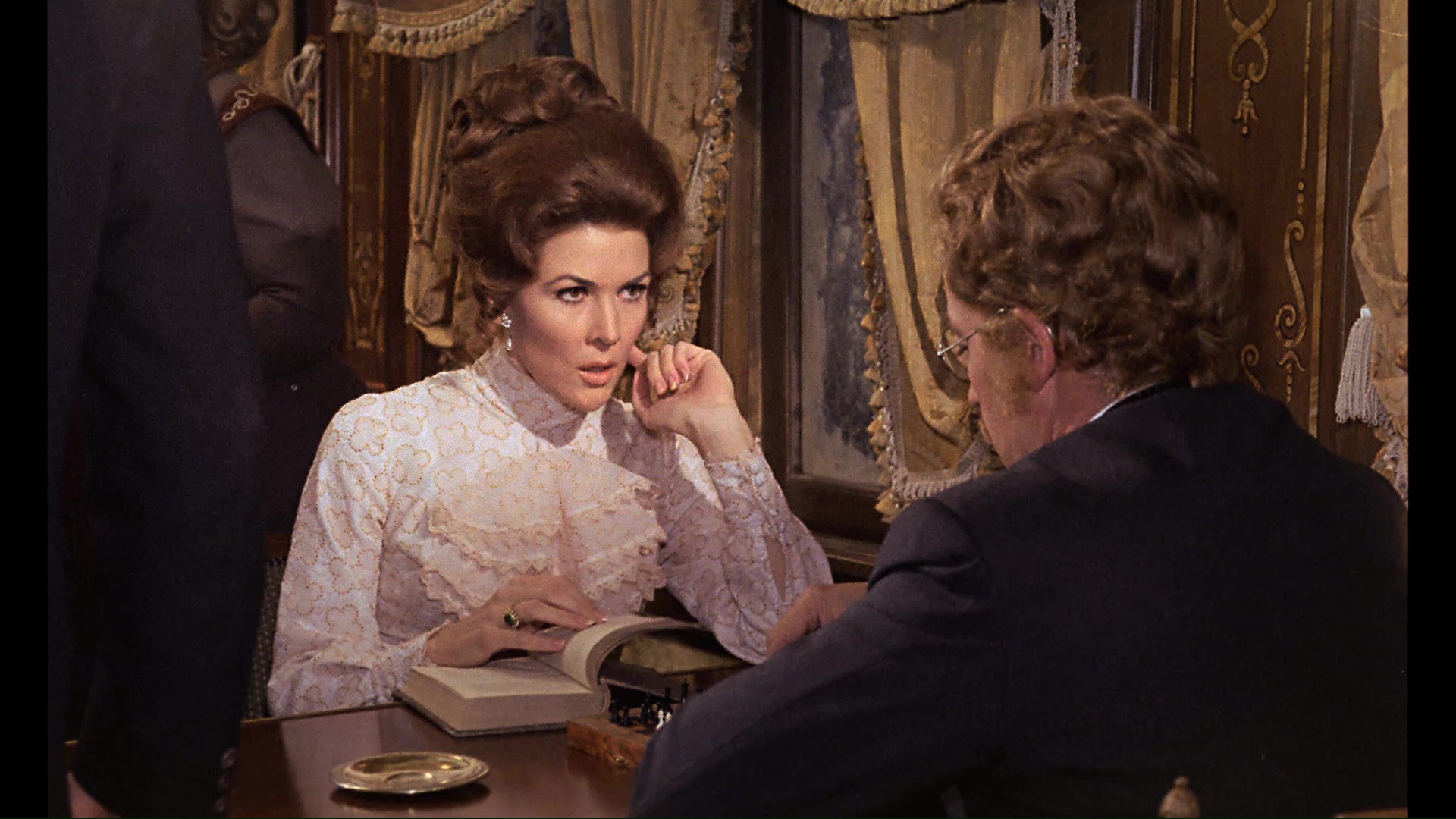 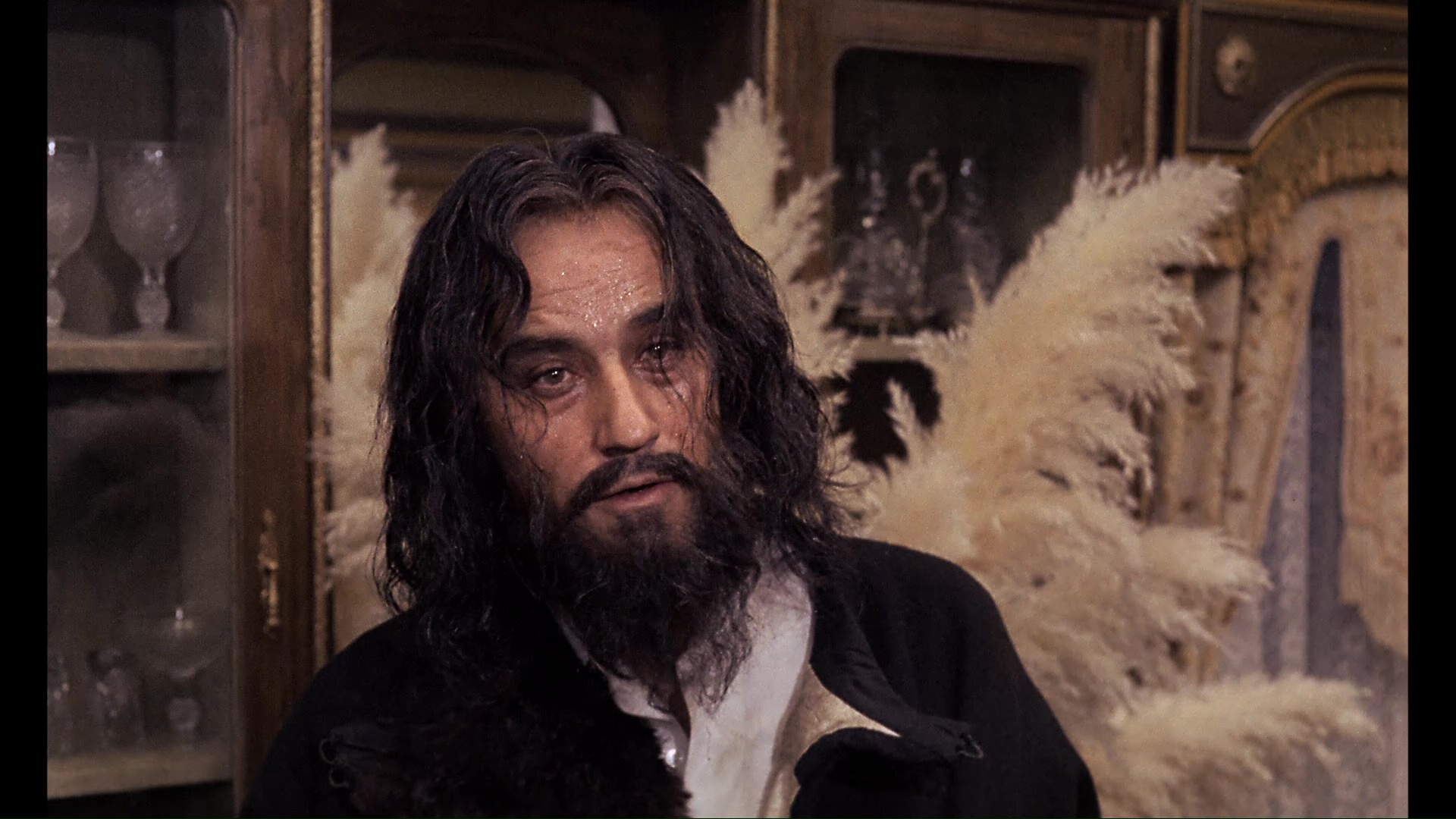 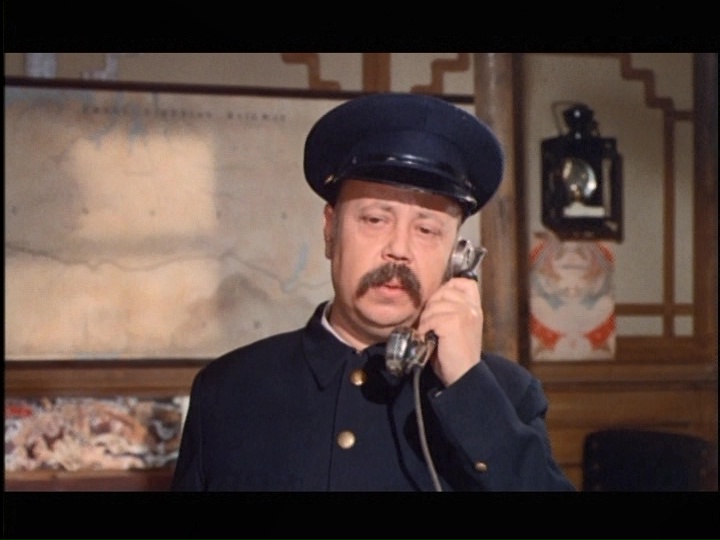 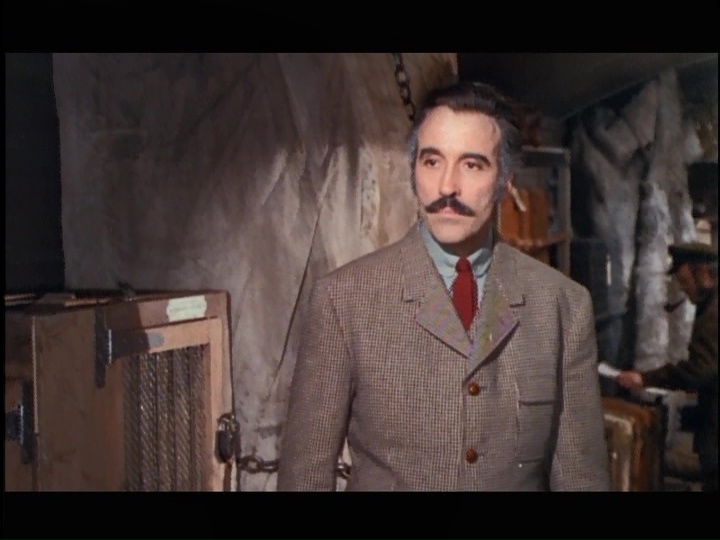 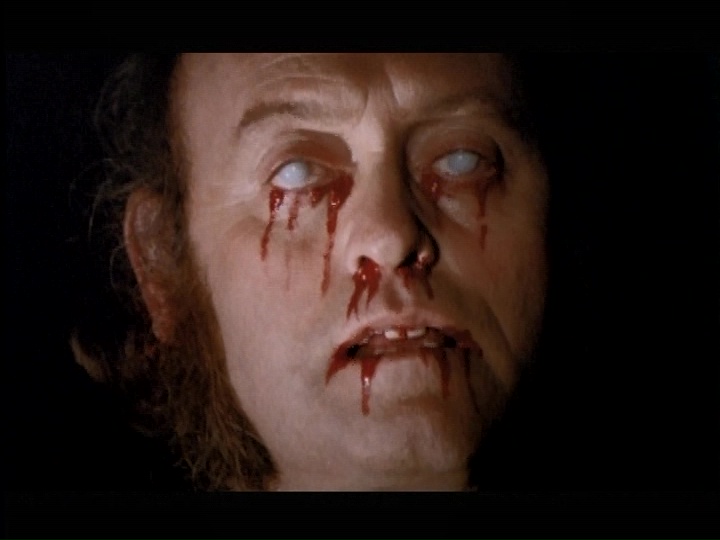 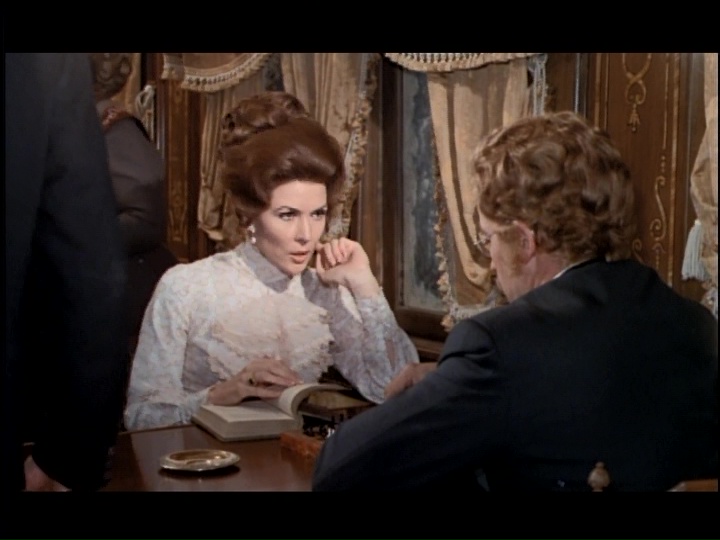 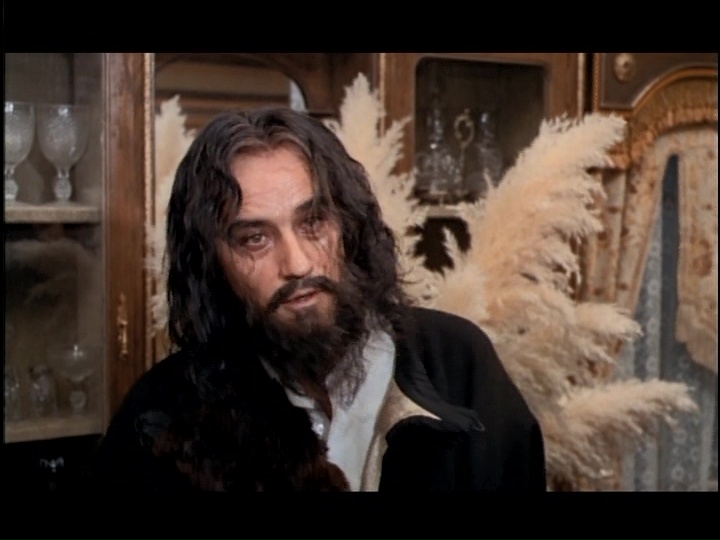