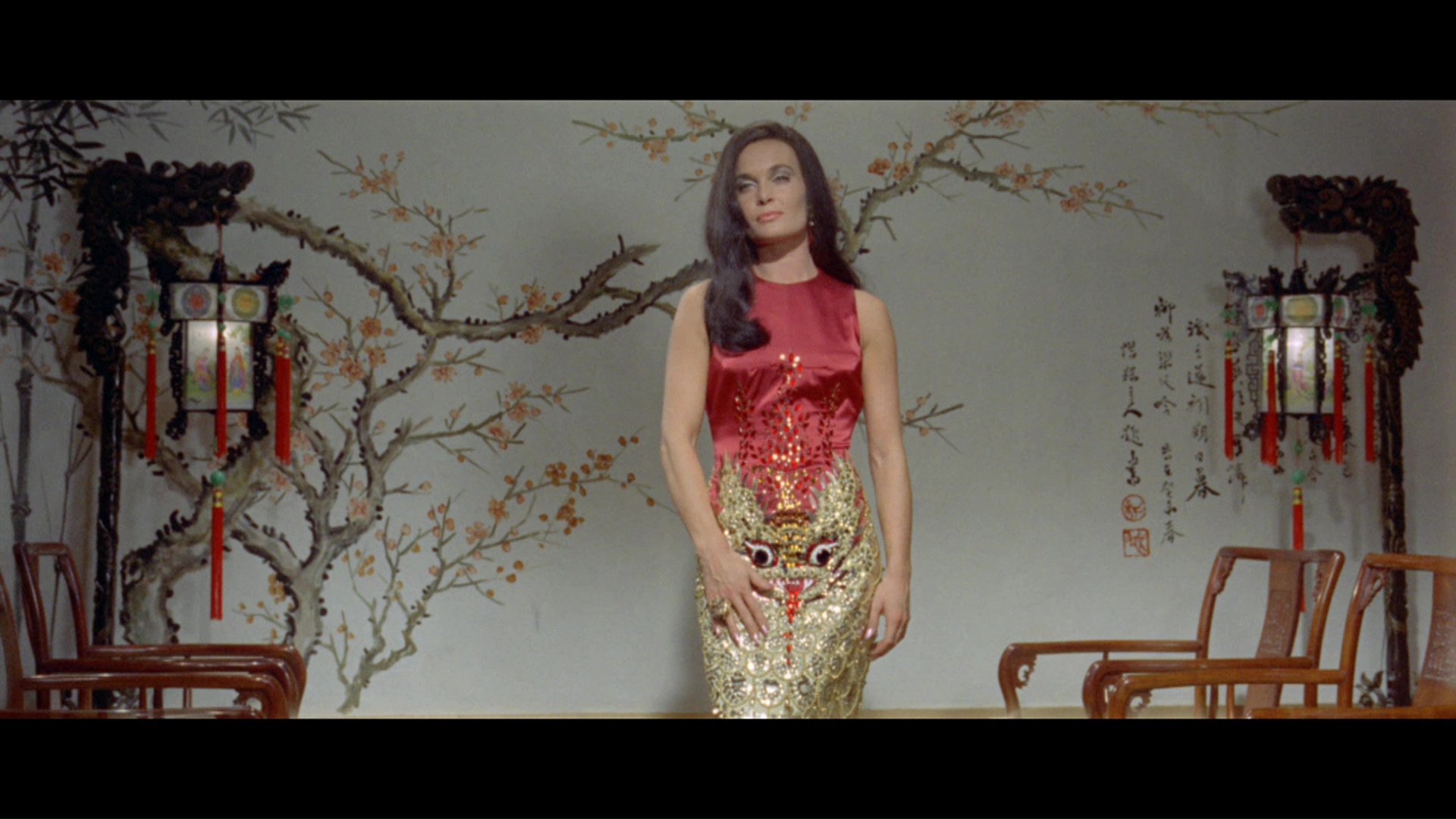 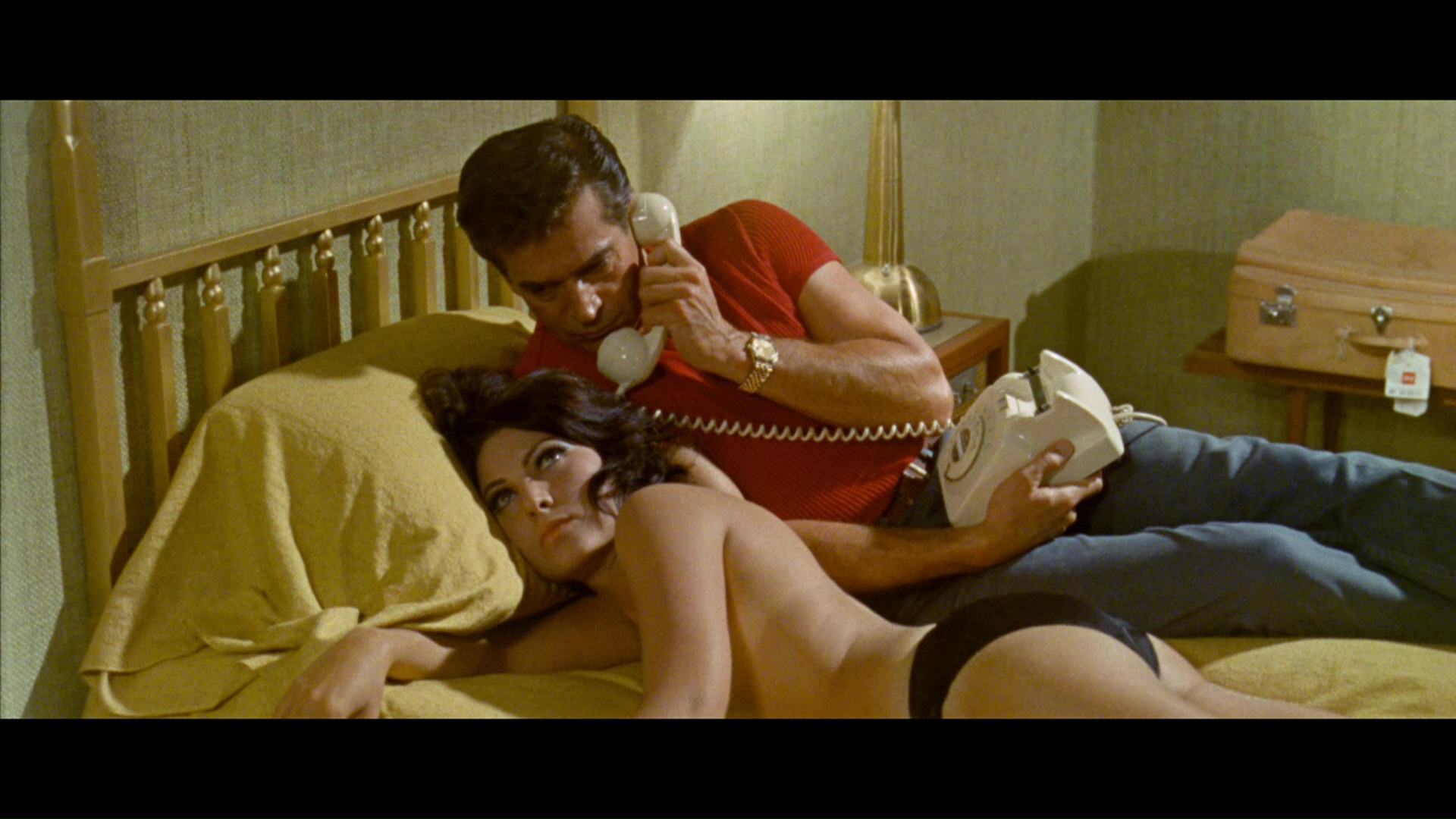 The busy and shameless British producer Harry Alan Towers was never one to miss a trend, and one he exploited all the way in the '60s was the James Bond craze sweeping the globe. His entry into feature films with spy yarns like Mozambique and Code 7, Victim 5 paved the way for a handful of Edgar Wallace and Sax Rohmer adaptations clearly inspired by the exotic thrills of the 007 films, with th latter author turning into a fine showcase for Christopher Lee as Fu Manchu in several titles. Towers also wrote several of these films (as Peter Welbeck), and that applies to another pair of Rohmer projects (with no attribution to the author) based around his jet-setting female supervillain, Sumuru, who started off as a radio serial essentially offering a less racist twist on the Fu Manchu character. Rohmer ultimately penned six novels with the character, though none of the storylines really informed the films. Both features were turned into star vehicles for Shirley Eaton, best known for being fatally painted gold in Goldfinger, who had also starred in Towers' solid '60s version of Agatha Christie's Ten Little Indians. Her career didn't last very long (she retired in 1969 to raise her children), but she certainly left an impression while she lasted.

First up we have the lesser of the two films (by a wide margin), 1967's The Million Eyes of Sumuru, which is mainly noteworthy as a rare English-language production for its time to be shot in Hong Kong at Shaw Brothers' studios. Director Lindsay Shonteff was the definition of a gun for 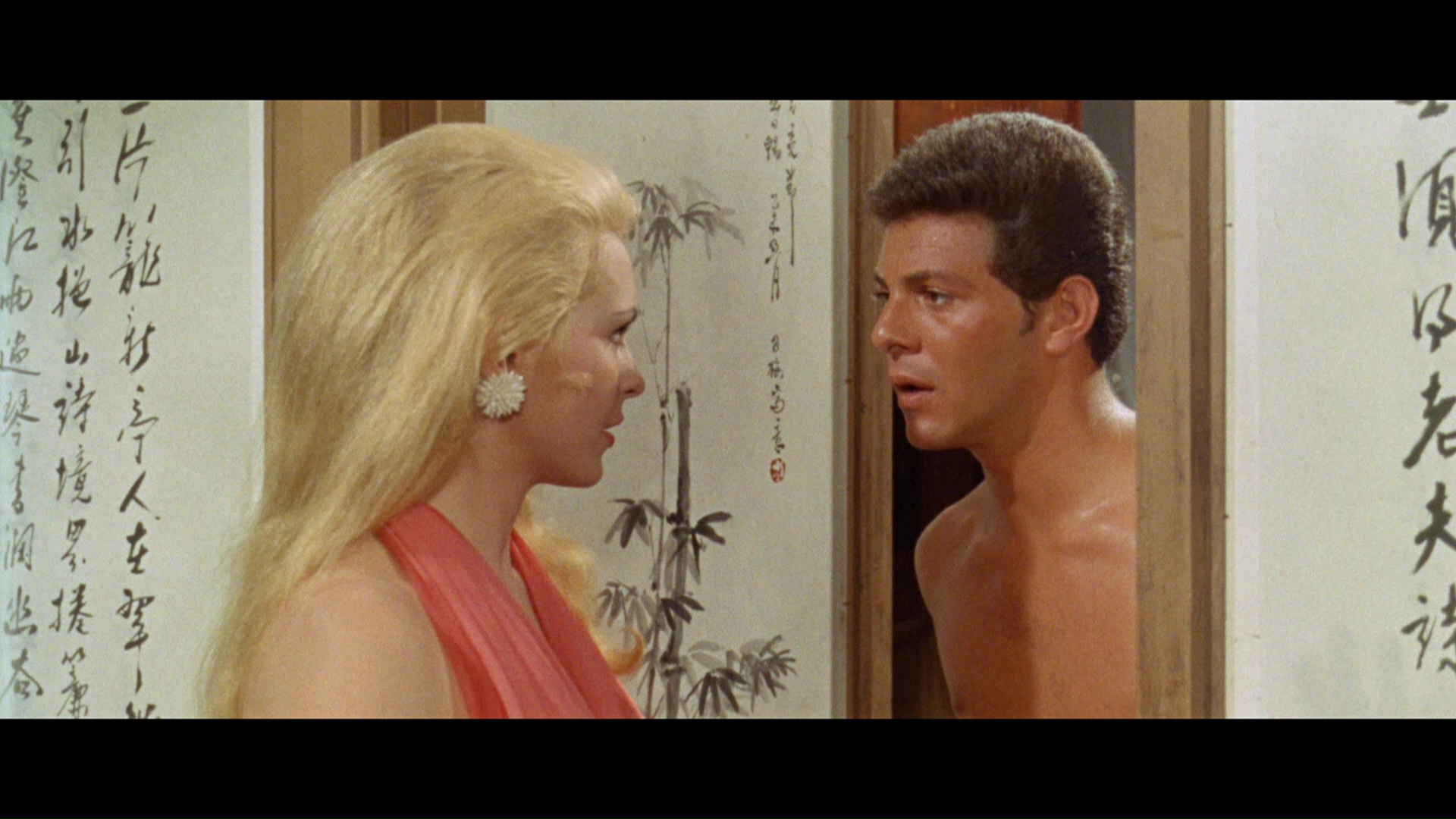 hire director, having done solid work on the horror cult favorite Devil Doll and a couple of middling spy films, and he brings competence if little else to this generic tale of two secret agents trying to take down the 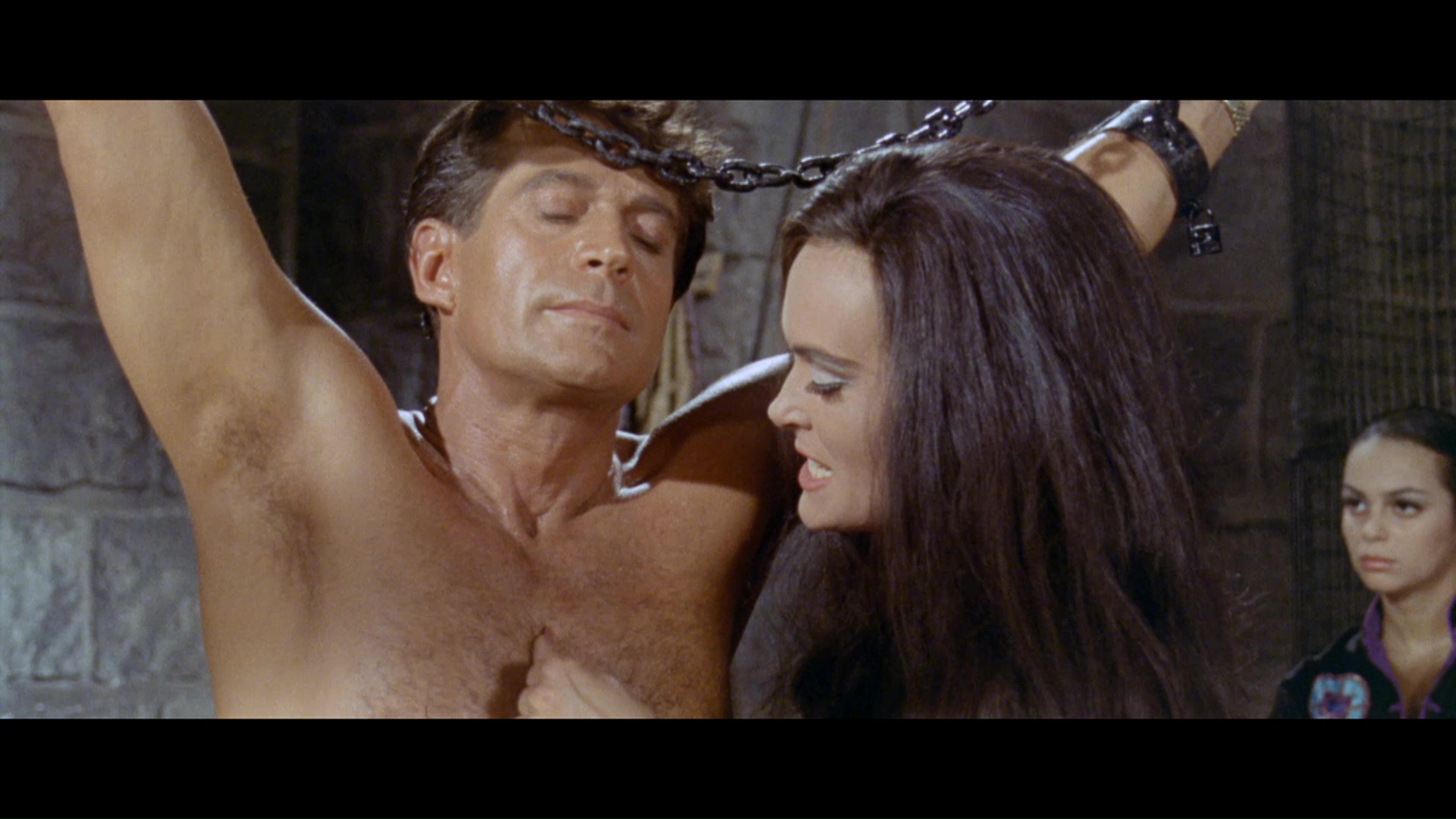 nefarious Sumuru. Her plot this time involves using her trained army of female accomplices to seduce and marry the eleven wealthiest men in the world before taking over their empires (by deadly means if necessary), and it's up to the governments of the West to stop her plan. The genial Colonel Baisbrook (Hyde-White) pushes together a pair of agents, Tommy Carter (Avalon) and Nick West (Nader), to undertake the mission, though they mainly run around and toss out lame wisecracks, even when they find a topless woman dead in their hotel room.

Better known to European audiences as Jerry Cotten, Nader looks pretty haggard here but seems to be having fun here; unfortunately the tone of the film veers all over the place. You get lots of scenic Hong Kong footage, goofy pratfalls, and occasional dashes of kinky torture and sex appeal thanks to the scantily-clad female baddies, but none of it really reaches its potential. Luckily Eaton is a strong enough presence to hold the basic concept together, but everyone else seems adrift including a misleading "introducing" appearance by Maria Rohm, Towers' girlfriend (who pops up in the second film in a different role). Fans of Klaus Kinski will enjoy his incredibly bizarre glorified cameo here as one of the targets, a prissy president, who keeps a look-alike bodyguard on hand and disguises himself in brownface! Also noteworthy is the bouncy, Eastern-flavored score by John Scott (credited here as Johnny), who became a library music fixture and would go on to such films as Greystoke, Shoot to Kill, King Kong Lives, and of course, Yor, the Hunter from the Future.

The 2016 Blue Underground edition marks the first U.S. home video edition of any form for this film, either solo on DVD or on Blu-ray as a double feature with its Jess Franco-directed sequel (of sorts), The Girl from Rio. Why this has remained so elusive for decades is a mystery, but it looks very solid here with a new HD transfer from the original negative. 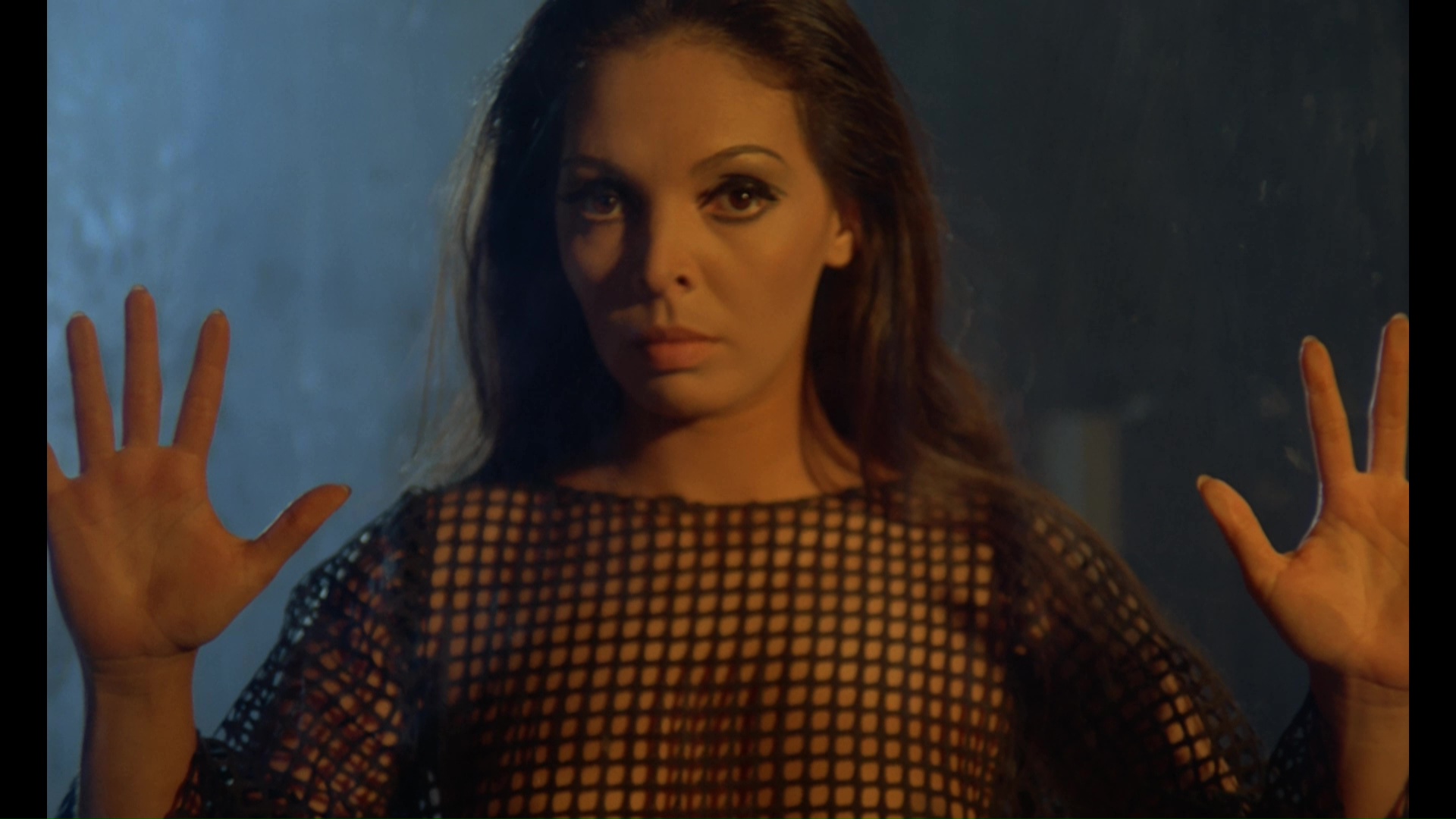 Colors look very bright and give the film a nice pop art feel, which helps out given the general lack of style in Shonteff's direction. The DTS-HD MA English audio track sounds fine, and optional English subtitles 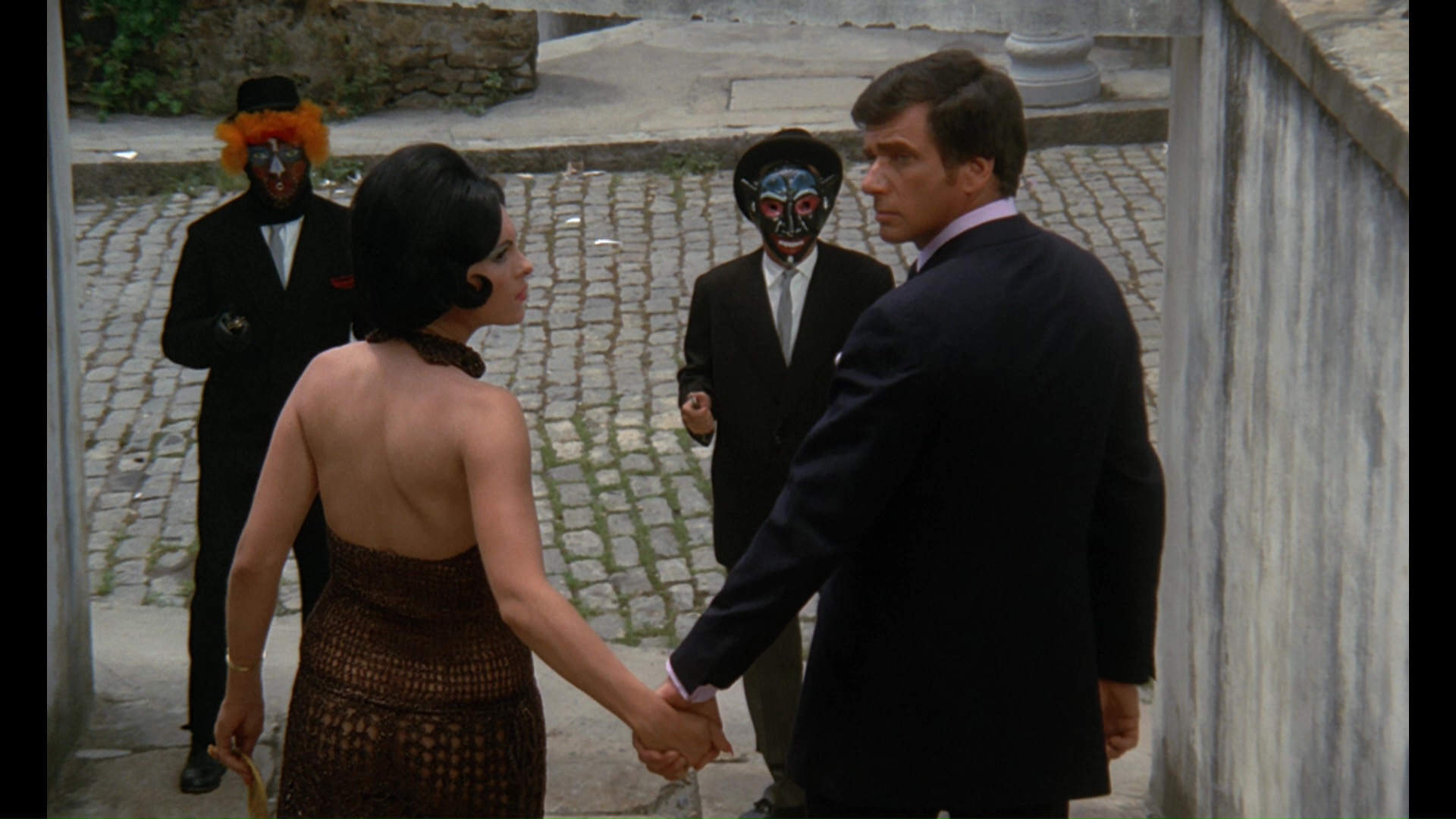 are provided along with the original theatrical trailer.

Next we jump to the far more outrageous and interesting second Eaton film, The Girl from Rio. This time our hero is an American guy named Jeff Sutton (Dick Smart 2007's Wyler), who shows up in Rio with a stolen stash of $10 million that immediately gets the attention of crime boss Masius (Sanders), who's too lazy to get up and answer a phone by himself. Jeff's presence also puts him on the radar of our gal Sumuru, now alternately calling herself Sununda, Sumitra or Sunanda for no apparent reason, who's up to her old tricks in the female enclave of Femina, scheming to defeat "all men's kingdoms" through feminine might and wiles. Jeff's too busy getting manicures and bedding women whose names he can't bother to learn to notice the suspicious behavior at first. While strolling around with his latest conquest, Lesley (Rohm again in one of her many Franco appearances), he's approached by a quartet of menacing men in masks who try to spirit him away to Masius, but Sununda's ladies step in and bundle him off on a plane instead. Soon he ends up in the villainess's futuristic lair where sexuality and sadism rule the day, and Masius will stop at nothing to track him down -- even if it means trying to drown Lesley to death in a swimming pool while giggling at Popeye comics. Sununda's no less wicked, keeping her enemies captive in giant glass cages with tape over their mouths and mowing down any imperfect girls in her army with machine guns when they disappoint her. Of course, Jeff turns out to have an ulterior motive as well that pits him in between the two 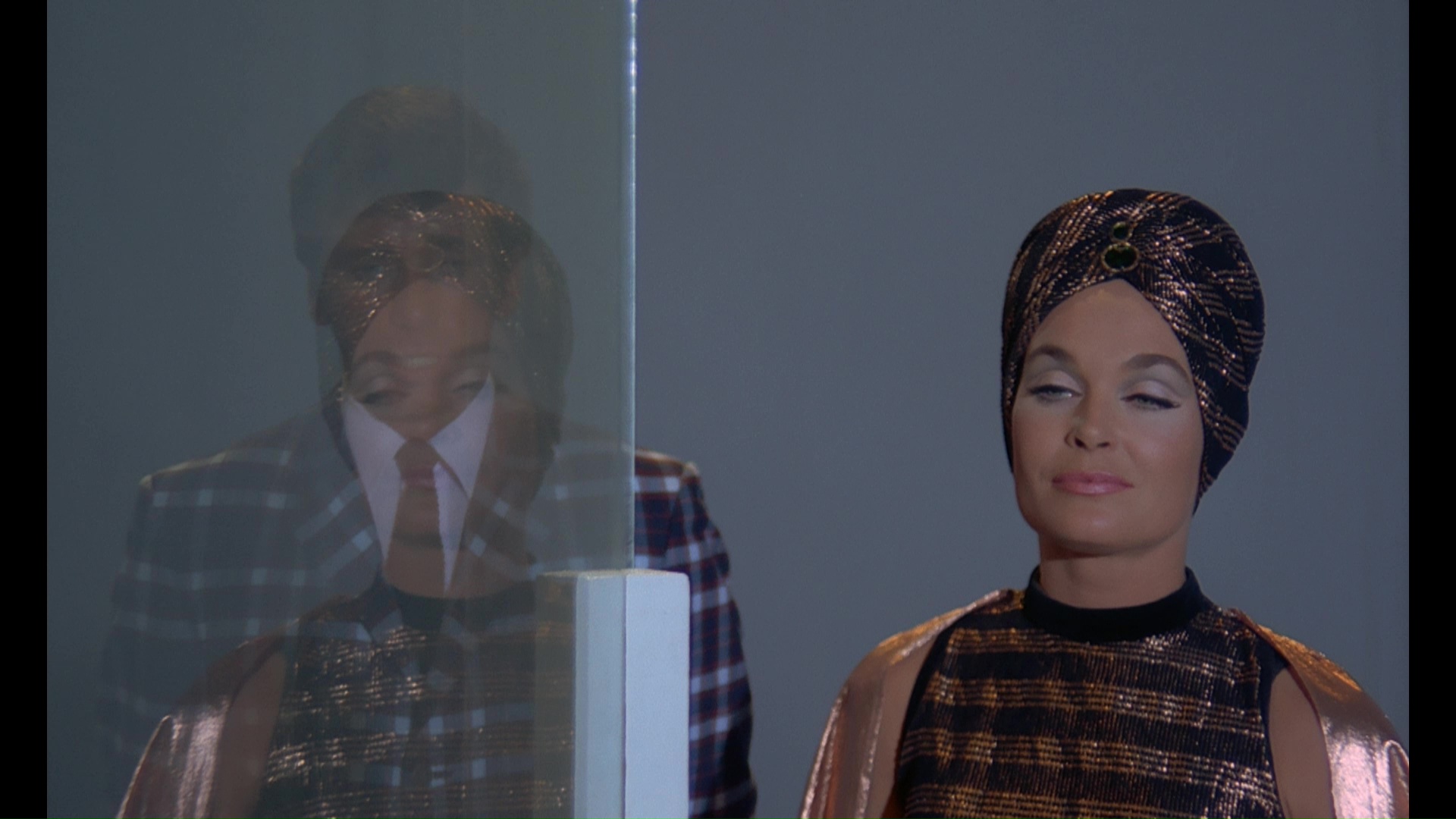 This kinky curio was made at the height of Franco's collaborations with Towers and sits snugly alongside their two Fu Manchu films, Blood of Fu Manchu and another 1969 film, The Castle of Fu Manchu. The twisted sex content is pretty far out for 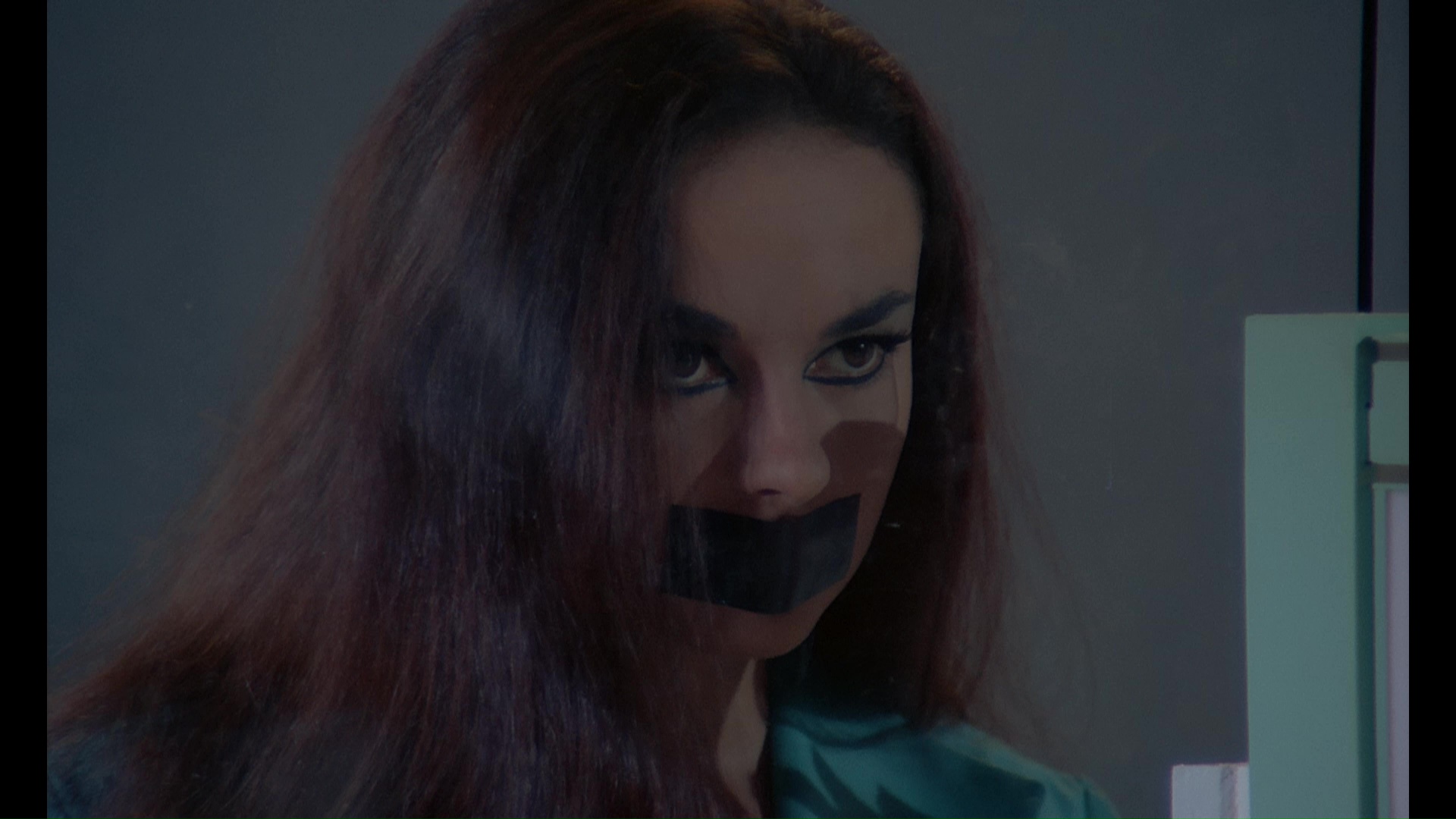 a supposedly mainstream Euro 007 imitation, with men frequently restrained on the floor and attacked by predatory women. You also get a fair amount of nudity in the uncut version, including some peek a boo shots of Rohm getting out of the shower and several female cast members wearing see-through mesh outfits. There's also a kicky score by frequent Franco composer Daniel White, who blesses us with a fantastic sub-Julie London theme song containing the following lyrics: "The girl from Rio, dangerous and cool as ice / She plays with men just like a cat plays with mice. / Sometimes a smooth operator comes along / But she soon changes his song. / The girl from Rio is every man's desire / One cold look sets a poor man's soul on fire / He longs to hold her in his arms for just a kiss or two / Dreaming is easy to do!" Apart from some carnival footage in the third act the Rio setting is mostly inconsequential, but it definitely makes for a catchy title.

The Girl from Rio bowed in some English-speaking territories in a brutally edited edition as Future Women, the source for some really lousy TV broadcast prints and gray market video copies, with every shred of sex and violence removed. Blue Underground first released The Girl from Rio on DVD in 2004 completely uncensored, including a fetishistic opening scene that paves the way for Franco's later Blue Rita, though the transfer exhibits some significant damage in several spots. 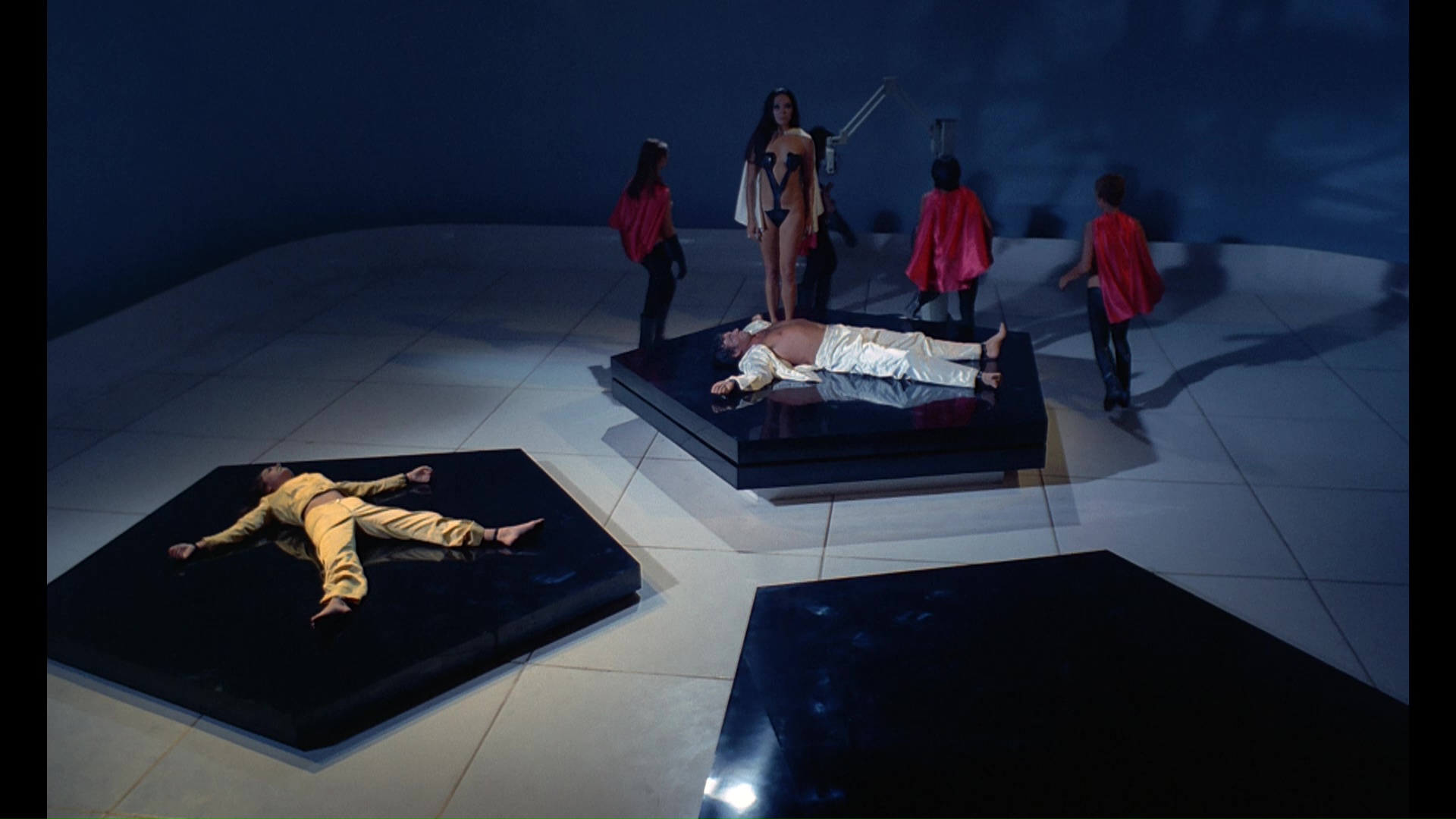 The film was shot in English with most of the actors providing their original voices, though it's obvious they're repeatedly saying the "Sumuru" with the two other random names dubbed in with little regard for lip synch. Extras on the DVD include a poster and still gallery, a "Facts about Sumuru" essay covering the character's literary history, and most substantially, "Rolling in Rio," a great 14-minute featurette with Franco, Towers and Eaton. Franco is effusive about Eaton and the comic strip nature of the film (which is sort of a cousin to his Lucky the Inscrutable as well), while Eaton is amusingly candid about her affection for the director and surprise about the naughtier side of his filmography. She also reveals her annoyance with a stand-in lesbian scene involving her character wedged in without her knowledge, and she also discusses her reasons for leaving the film industry for good after making this in Brazil. Towers has less to talk about, though he does go into the fast shooting schedule (which wrapped a week before they even got to film the carnival) and how this segued into the making of 99 Women. Don't miss Franco's Hitchcock anecdote at the end, too.

The 2016 Blu-ray version of The Girl from Rio sports a much cleaner transfer and improves across the board in every area, with even the already hypnotic colors looking even better. This isn't the most razor sharp production in the world, but it's a major step up and far more natural in appearance compared to the DVD, which also looks tremendously compressed in comparison. (Here's a sample DVD frame grab; compare to the one above.) The Blu-ray also runs 7 seconds longer, presumably due to less print damage. Again the DTS-HD MA mono audio sounds great (with optional English subtitles again), and the essential featurette is carried over along with a higher res poster and stills gallery.