An unusual fusion of film history, travelogue and emotional journey, Tigrero (subtitled "A Film that Was Never Made") offers a fascinating experience for film buffs. Forty years after a collapsed film project, director Samuel Fuller returned to his scouted locations along the Amazon

to the tribe of the Karajá Indians, living in the Mato Grosso in Brazil. Accompanying him was filmmaker Jim Jarmusch, and the cameraderie of the two directors from different generations serves as a counterpoint to the natives who see their relatives on film for the first time.

The film begins as a chronological diary of the trip, with Fuller and Jarmusch (sporting a Ramones T-shirt through most of the filming) boarding a small cargo plane and arriving among the Karajá. Fuller had shot approximately sixteen minutes of 16mm Cinemascope footage back in 1954, depicting the indigenous people and the landscapes who would become a vital part of a sprawling Fox action film starring John Wayne, Ava Gardner and Tyrone Power. Due to insurance issues, the production never came to fruition. The natives are shown the existing scenes (which later wound up visually squished as a surreal passage in FUller's Shock Corridor) and are moved by the images of themselves and their kin preserved on film. The subtle technological changes in the culture are the only

major marks of the passage of time, and the two directors ruminate on what could have been if the film had been produced and released.

Every bit as engaging as his reputation might suggest, the cigar-chomping Fuller makes an enjoyable guide as he simultaneously discusses the abandoned Tigrero project. (The title, "Tiger," refers to the hero of the film.) Most interesting is his opening monologue discussing his proposed opening for the film, in which a tracking shot along the Amazon would capture the predatory behavior of various animals. The pacing of the film is fairly langorous, soaking in the atmosphere as two like-minded Americans

bounce off each other as they learn more about a culture as far removed from the American filmmaking scene as possible.

To compensate for the brief running time, Fantoma has loaded this disc with a number of special features including a reflective audio commentary with Jarmusch and Finnish director Mika Kaurismäki. Both have to remind themselves that Fuller (who died three years after filming) isn't around anymore to call up on the phone, and their memories of him provide a good balance of humor and warmth. Jarmusch also provided his own selection of photos which comprise a gallery on the DVD, along with Fuller's unedited raw footage from 1954 (presented in anamoprhic widescreen, as is the feature itself). Twenty minutes of deleted scenes offer further conversation between Jarmusch and Fuller as they interact with the tribe; it's understandable why the material was cut but nice to have nonetheless.

Before plunging into baroque, stylized social statements like The Naked Kiss, Samuel Fuller was one of America's finest B-movie craftsmen, toiling in the trenches making everything from lean war pictures to taut noir parables like the beauty under discussion here. 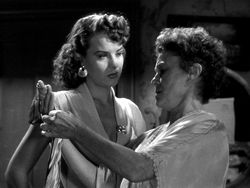 Made at the height of Red Scare paranoia, Pickup on South Street begins with one of Fuller's most memorable sequences as thrice-convicted pickpocket Skip McCoy (Widmark) cozies up to call girl Candy (Peters) on the subway, only to swipe her wallet as the doors close. Unfortunately he ends up not with a wad of cash but a mysterious microfilm the clueless Candy was transporting for her shady boyfriend, "lawyer" Joey (Richard Kiley), who's actually a Communist spy. Thanks to an enraged Joey, Candy frantically approaches Skip for the microfilm but winds up falling for him instead, while a pair of feds close in around Joey - whose Red accomplices are laying on the pressure as well. All of the parties in one form or another link to streetwise Moe (tough-talking Thelma Ritter), whose no-nonsense moral stance triggers a violent chain of events.

Already a hard-boiled pro thanks to 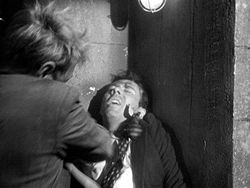 his villainous slimeball in Kiss of Death and his memorable huckster in Night and the City, Widmark was the obvious choice to play Skip and holds the film together as an unlikely leading man, socking out the heroine and verbally fencing with the cops and Commies without batting an eye. Kiley and Peters are fine in their roles, but they're completely upstaged by Ritter (who was nominated for an Academy Award here, believe it or not), normally the comic sidekick in films like Rear Window and Pillow Talk but here allowed to chew on a genuinely meaty role. Fuller's clean, razor-sharp compositions and pacing ensure that the film never flags at a tight 80 minutes, and the political content hasn't dated much when one considers how closely it parallels modern American attitudes encouraged by the government (a subject covered thoroughly elsewhere, so draw your own conclusions on that one).

A home video and cable stape, Pickup has always looked respectable on the small screen but gets its nicest makeover yet from Criterion. The detail and contrast levels look dead on, with some nice grainy texture visible where appropriate to give it 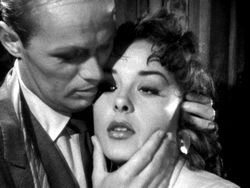 that rough urban feel. The mono audio sounds robust, with the spare but effective "crime movie" score coming through loud and clear. Once again, kudos for the optional "subtitles for the deaf and hard of hearing," which come in handy during some of the zippier dialogue exchanges.

Far more lavish than Criterion's earlier Fuller discs (The Naked Kiss, Shock Corridor), this title comes with excerpts from a great Samuel Fuller video interview with Time's Richard Shickel, an illustrated step-by-step Fuller bio (with photos) by Jeb Brody, TV snippets of Fuller discussing the film on the program Cinéma Cinémas, a gallery of promotional material including some stunning advertising paintings, a Widmark text interview in which he discusses the film (which he hadn't seen since its release), and a bounty of Fuller trailers including Fixed Bayonets, Pickup on South Street, House of Bamboo, China Gate, Forty Guns, a trailer and standard teaser for Hell and High Water ("in Cinescope, the modern miracle you see without special glasses!"), Shock Corridor, and The Naked Kiss. Thankfully, all of the scope trailers are presented 16:9 as well. The disc is packaged with a booklet containing passages from Fuller's autobiography, A Third Face, as well as an essay by writer Luc Sante.

After the disastrous studio mishandling of White Dog, cult auteur Samuel Fuller turned his directorial eye towards European-financed projects like the odd Thieves After Dark and the ever stranger Street of No Return, a hallucinatory blend of film noir and '80s kitsch based on a novel by David Goodis (Shoot the Piano Player). Shot entirely in Portugal with a truly peculiar international cast, this was Fuller's last feature film (not including some European television work) and offers an unusually hopeful and optimistic resolution to one of the cinema's most unorthodox careers.

In the violent opening sequence, a street riot spreading through a nearby prison results in a shocking blow to Michael (Keith Carradine), a shaggy-haired bum who staggers off into the streets. The amnesiac's memories flood back as, in flashback, we learn he was once a successful pop star. While on tour he enters the dangerous life of Celia (The Name of the Rose's perpetually naked Valentina Vargas), a nightclub dancer with whom he ignites a passionate affair. Unfortunately her mobster boyfriend and sponsor, Eddie (Marc de Jonge), doesn't take too kindly to the idea and lures Michael onto a boat, where he leaves the crooner for dead with a slashed throat...

array of supporting characters including Bill Duke (cast as a cop, as usual) and the always enjoyable Andréa Ferréol (A Zed and Two Noughts), Fuller's film was never released in the United States and has remained something of an odd footnote in his career, rarely seen apart from hazy bootleg tapes. Carradine offers a solid, intriguing performance while typically providing his own singing; his songs have dated rather poorly, but otherwise the film holds him rather well. He and Vargas also go at their love scenes with a sweaty ferocity typical of more continental fare, and the revenge aspect is handled with more romantic aplomb than the following year's strikingly similar goofball Kevin Costner vehicle, Revenge (based on another neo-noir novel by Jim Harrison). The low budget's limitations are often evident, but Fuller still conjures up some striking set pieces. In particular, the opening riot and the hallucinatory image of a topless Vargas in showgirl gear astride her horse, trotting through the middle of a deserted city street with Carradine in tow, are among Fuller's strongest visual achievements.

Fantoma's disc offers a razor sharp presentation of a film rarely seen in optimum condition. The elements are in beautiful condition, and the Dolby Digital 5.1 remix tweaks the original stereo tracks with some effective split channel effects. The warbling electronic score is spread nicely to the front speakers, while thunderclaps and gunshots split off to the rears with crisp clarity. The biggest extra is a running commentary track with Carradine, who offers numerous recollections of working with Fuller and offers some well-observed insights into his directorial method. He also humorously notes the pointed irony of having his bum appearance consist of long, shaggy hair while his rock star look consists of a short, cropped coiff. Other extras include a disjointed theatrical trailer, a half hour documentary compiled from behind the scenes footage shot during filming, in which we see the various Portuguese settings being handled under the cigar-chomping Fuller's supervision along with extensive interviews with Fuller and Carradine. A text interview with Fuller (excerpted from Henri Veyrier's Samuel Fuller - Sans Espoir de Retour) is also included, while the extensive liner notes by author Lee Server offer a thumbnail overview of Fuller's career and the film's place in his output.