This departure of sorts for New Zealand's greatest current cinematic export, Peter Jackson (The Lord of the Rings), allows 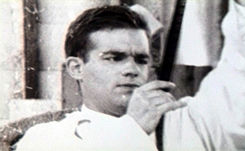 him to apply his gusto and visual wizardry to a film more gentle and heartfelt than all of his other work put together. While Heavenly Creatures displayed a more humane and character-driven side than one might guess from the splattery likes of Dead Alive, the unorthodox structure of Forgotten Silver, along with the added factor of a co-director in the form of Costa Botes, produces something entirely new and magical.

It's impossible to discuss Forgotten Silver without giving away some crucial elements of both the story itself and the factors behind its creation, so if you're simply curious, just know that this is a terrific film and can be shown to virtually any member of the family. Furthermore, fans of experimental cinema, silent classics, and cinematic virtuosity will be especially gratified by what everyone involved has achieved here. Okay... now you've been warned. Shall we proceed? 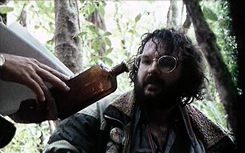 The one hour pseudo-documentary begins with Jackson and Botes being invited to the relative of Colin McKenzie, an obscure New Zealand filmmaker from the early days of celluloid who has been relegated to footnote status in most reference books. Leonard Maltin, Miramax's Harvey Weinstein, and actor Sam Neill all appear throughout to offer their own observations on McKenzie and the ramifications of the directors' discovery of McKenzie's legacy, a massive amount of films and historical documents capable of changing the entirety of film history itself. The ambitious McKenzie had movies in his blood from an early age, when he used a steam engine to power a projector, ran his camera with a bicycle, invented the tracking shot, and got into trouble for stealing an unholy amount of eggs. Before anyone else he developed color film, talking pictures, the close up, and the massive biblical epic. Unfortunately the bizarre quirks of world history and financial unpredictability conspired against McKenzie, who found the love of his life thwarted (at least temporarily), his dream project nearly sabotaged by shaky backers, and his career compromised by his creative involvement with a slapstick comedian. 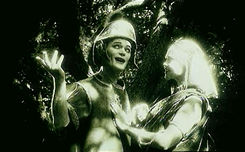 As Jackson unabashedly admits on this DVD, Forgotten Silver is essentially "a great big lie," a delicious hoax which perfectly imitates the advances of cinema for the past one hundred years. The clips of McKenzie's films are dead on, with enough humor to provoke a chuckle but never going overboard to call into question the story's authenticity. In fact, while McKenzie and his cohorts never existed, it's astonishing how much pathos is evoked during the final few minutes; the powerhouse of a punchline ends the film on a perfect, bittersweet grace note. Not to be overlooked is the magnificent imitation of a silent epic, with McKenzie's Salome brilliantly encapsulated during its long delayed premiere which contains some striking visuals not too far removed from some of the genuine pioneers of silent cinema.

First Run's DVD of Forgotten Silver looks essentially the same as their VHS version, which was sharp enough already. This still looks like a television program, no better or worse, and makes for a fine presentation. The real treat here is the extra material, including several bits of deleted footage (interviews with Maltin, Jackson and Botes hiking through the New Zealand jungle some more, and so on), a running audio commentary with Botes (vaguely identified as "director's commentary" on the packaging), and a 22 minute behind the scenes documentary entitled "Behind the Bull," containing a wealth of information about the production of the film. Some of the treats here include undoctored McKenzie footage before the lab work, interviews with Jackson and Botes, FX designs, and much more.

Peter Jackson's wacko blend of off the wall comedy and rollercoaster horror sank rapidly at the U.S. box office, thanks mainly to lukewarm studio promotion and bad word of mouth from moviegoers unfamiliar with his pre-Heavenly Creatures genre hybrids like Bad Taste and Meet the Feebles. While this film is undeniably milder in tone, thanks most likely the participation of executive producer Robert Zemeckis, The Frighteners has amassed a steadily growing cult following since its release and has now been finally issued by Universal in what could very well be, for the time being, the most exhaustive special edition ever released to the public.

In what could best be described as a collision of The Ghost and Mr. Chicken with Silence of the Lambs by way of Terry Gillian, psychic exterminator Michael J. Fox arranges for his three ghost pals (including an impressively prosthetic-drenched John Astin) to stage hauntings and allow Fox to reap the financial rewards of ridding them from suburbanites' homes. Meanwhile, a series of strange deaths by heart failure plague the same town, and Fox finds himself entangeld with a beautiful, young, and recently widowed doctor (Trini Alvarado). As if that weren't enough, Dee Wallace Stone (a lot closer here to The Howling than E.T.), recently released from confinement in a mental institution after accompanying her lover on a murder spree at the age of 15, is tormented by a ghost burrowing under walls and floorboards.

While the image quality may not be quite as dazzling as the anamorphic transfer of Universal's recent immaculate DVD edition of The Frighteners, the extra footage (over 12 minutes) and bonus materials are enough to make any genre fan thankful for hanging on to their laserdisc player. Furthermore, the welcome price tag of $49.95 is a substanital improvement over previous and inferior "special editions" which often fetch over $120 when they hit the street. The extra scenes in the film don't really enhance the plot, but they do help the pacing a great deal and include some fascinating character quirks (most notably a jaw-dropping monologue by FBI agent Jeffrey Combs about his undercover cult work). Two restored sequences with Stone and Jake Busey rank up there with Jackson at his most perverse (one of them involves a queasy morgue make-out session), and Astin gets a good deal more screen time as well. Of course, this is just the beginning-- the rest of the box set consists of a four and a half hour documentary directed by Jackson himself, The Making of The Frighteners, which remains surprisingly interesting and brisk throughout its running time. Interviews with all of the principals and exhaustive explorations of the special effects work are enhanced with additional deleted scenes (including one entire character missing from the final print), bloopers, and an interview with composer Danny Elfman about his quirky, Dementia-13-inspired music score. Other bonus include running commentary during the feature with Jackson (which doesn't overlap noticeably with the material in the documentary) and the original trailer. Since the total running time is prohibitive for a DVD release anytime in the near future, run, don't walk, to pick this one up.

"Your mother ate my dog!" If you haven't seen New Zealand cult director Peter Jackson's splatter-soaked zombiefest, get thee to your nearest video store immediately. Originally known as Brain Dead overseas but retitled here due to a Bill Pullman movie of the same name, this was essentially the conclusion of Jackson's gross-out trilogy (after Bad Taste and Meet the Feebles). Hard to believe he's now doing Lord of the Rings, but we shall see... In the film, mama's boy Lionel (Timothy Balme) must contend with a number of insane zombie onslaughts after his tyrannical mum is bitten at the zoo by the dreaded Sumatran Rat Monkey and turns into a contagion-spreading beastie. With the help of his tarot-following girlfriend, Pequita (Diana Penalver), he uses everything at his disposal, including a very memorable lawnmower, to dispatch the flesh-eating pests. Dead Alive was originally released in a claustrophic, pan and scan version (it was shot hard-matted at 1:1.85) on video and laserdisc by Vidmark a few years ago. Aside from being overly soft, the print featured colors so digitally punched up that it practically glowed with pink and shades of lime during the gore scenes; kind of interesting to look at, but that isn't how it appeared in the theater. (They also issued an abortive R-rated version for Blockbuster, which is almost as amusing in its incoherence as the 92-minute R-rated cut of The Cook, the Thief, His Wife & Her Lover). Meanwhile, the Japanese released it under its original title on laser; luckily, this 106-minute version included a few odd but insignificant snippets of footage missing from the unrated American edition. (No entire scenes were cut; the longest deletion is a repeat of Uncle Liz hitting on Pequita during the funeral scene.) The shorter version is much tighter, actually, and is only missing one fleeting second of gore during the finale, in which a zombie is wishboned in half. The Japanese version was also pan and scanned, as well as virtually colorless. So how does the DVD measure up? Well, it looks right; the colors are rich but not overbearing, and the punchy stereo soundtrack sounds better than ever. Best of all, it's finally letterboxed (and 16x9 enhanced), which provides a much more visually pleasing presentation than any other version. (It was only previously letterboxed on a fuzzy-looking video from Holland.) It's still the 97-minute unrated cut, which may or may not be a good thing, depending on your point of view. It's hard to quibble, really, when it looks this good, and it includes the U.S. trailer as well. Just be sure to wear a raincoat when you watch this, 'cuz you'll feel pretty drenched by the time it's over...