Poor Jerry Warren. While Ed Wood is now regarded as the king of lovable Z-grade schlock, the equally stupefying output of Warren is marginalized by those who fail to see the cracked entertainment value in such drive-in gems as Man Beast, Teenage Zombies, and The Wild World of Batwoman. Fortunately DVD has rescued a few of his gems from home video oblivion, and one of the benficiaries is his final cinematic opus, Frankenstein Island, released after Warren spent a whopping fifteen years away from the cameras. 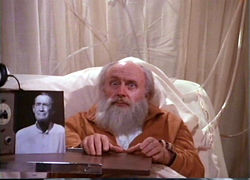 Thanks to a hot air balloon snafu that leaves them stranded on a remote island, a doctor (Robert Clarke) and his band of cohorts (including "Melvin the dog") wind up sharing company with a tribe of amazonian she-babes (who obviously discovered the wonders of modern cosmetics instead of fire). Unfortunately there's also a nearby castle, while a babbling prisoner (Cameron Mitchell) warns them of the unspeakable evils being conducted on the premises. As it turns out, the guilty party is platinum-haired Sheila Frankenstein (Warren regular Katherine Victor), who's carrying on the family tradition by churning out mutants, keeping her father's decrepit assistant alive with blood experiments, and fiddling with electrical gadgets. Oh yeah, and John Carrdine shows up as a rambling superimposition for some reason, and a bolt-necked monster does finally appear in the final few minutes to shamble through the lab set. 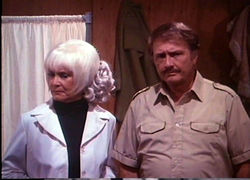 As surreal as they come, Frankenstein's Island firmly belongs in the company of such other rambling non-movies as The Beast of Yucca Flats and Glen or Glenda?, though its relatively late vintage of 1981 makes this one the arguable swan song of old Z-grade school exploitation. The precious minutes of Mitchell and Carradine footage weren't much of a selling point by the time this was unleashed on drive-in audiences, but it is an oddly nostalgic reminder of those days when a quick appearance from the likes of Boris Karloff or Peter Lorre would be enough to land any cut-rate quickie on the silver screen. Then there's that priceless Warren dialogue, which meanders around every single point and uses ten sentences to convey what normal people would express in three words. 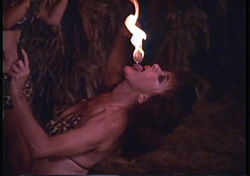 Ventura's Frankenstein Island DVD is tough to evaluate, given that the film was apparently shot for about five dollars on cheapo film stock. The appearance isn't much above what you'd expect from a standard one-inch video master, with soft colors and detail, but God only knows how pristine this could ever look. A long reel in the middle suffers from a slight horizontal jitter, but otherwise print damage is kept to a minimum. Color saturation looks fine, but the black levels tend to be flat and washed out - again, perhaps a flaw with the original film processing. The DVD (which top-bills Carradine on the cover) features a still gallery and a five-minute interview with Victor, who paints Warren as an affable con man who didn't always treat his actors with the utmost respect. A shame, as even here those pros gave him more than his directorial abilities really deserved.