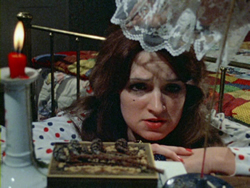 The often mysterious parade of directors 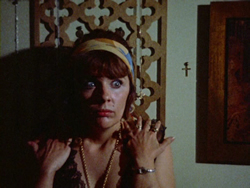 Davis' most widely available film on home video for decades now is Evil Come Evil Go, a softcore slasher film inspired by the horror classic The Night of the Hunter (right down to the opening Bible quote and use of the hymn "Leaning on the Everlasting Arms"). Shot by by the prolific Manuel Conde (Deep Jaws) and produced by cheerful porn auteur Bob Chinn (who made a killing with the Johnny Wadd films), this is the story of Sister Sarah Jane (O'Hara), an extreme religious fanatic determined to rid the world of unclean men. After knocking off and disemboweling a deadbeat truck driver (Davis himself), she makes her way to Hollywood (with a long-haired troubadour occasionally in tow to sing her theme song!) where her insane southern-fried sermons attract a new follower, troubled lesbian Penny (Henderson). Together they turn an apartment building into a slaughterhouse by luring men to their doom, or at least popping up to scare off a randy couple who have the nerve to get naked in public.

Definitely not your average skin flick, Evil Come Evil Go was theatrically released by Conde's own distribution company but didn't really earn a major reputation until it surfaced in the late '90s on VHS from Something Weird and caught the attention of more than a few horror fans. The actual gore content is fairly tame (featuring splatter effects by none other than porn legend John Holmes!), but one sex scene with Rick Cassidy lodged right in the middle of the film veers the film into surprisingly explicit territory for a few minutes. Of course, the real reason to watch this is 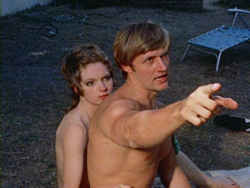 O'Hara, an actual southerner who chews the scenery with abandon and makes for one of the screen's most unusual female Bible-thumping psychos before Piper Laurie took the concept mainstream with Carrie. She didn't have much of a career away from Davis, but she certainly shone bright for a couple of years.

Thanks to that aforementioned VHS from Something Weird, Evil Come Evil Go quickly became one of the label's most-requested titles for a potential DVD release, eventually appearing on the format in 2005 as a triple feature with Terror at Orgy Castle and The Hand of Pleasure. That edition was discontinued five years later (with all of Davis' films dropping out of the SWV catalog, incidentally), replaced with a 2014 version from Vinegar Syndrome designed as a very different triple feature devoted solely to Davis himself. The new Vinegar Syndrome transfer is cleaner and more colorful than the previous transfer (which was already quite good to being with), a 2K scan from the original negative according to the packaging. 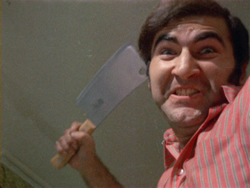 (It also runs 11 seconds longer, presumably due to far less print damage.) This is still an ultra-cheap 16mm production, so don't expect visual fireworks; that said, it's hard to imagine how this could look better, and it's great to have this sick puppy back in circulation.

Sharing space with it on the first disc is a much stronger Davis film and still one of the most shocking films of its era, Widow Blue, a completely insane hardcore gore film shot the same year as the much more famous XXX narrative breakthrough, Mona the Virgin Nymph. It's difficult to imagine who the target audience for this film was supposed to be considering this was bound to be banned in almost every territory imaginable. The film never received an actual theatrical release and was barely shown to the public at all, essentially surfacing for the first time as a Something Weird VHS in 1995 as one of Frank Henenlotter's "Sexy Shockers from the Vault" under the title Sex Psycho. Word spread like wildfire that this was one seriously sick puppy of a film and had to be seen to be believed, and the hype turned out to be completely true. In fact, the film was still way too rough 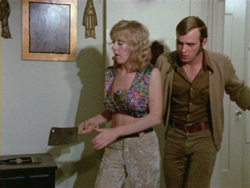 for some states to handle at the time, and it was pulled fairly quickly from circulation along with another truly twisted gore/porn combination, Hold Your Piece. Eventually they discreetly shuffled it back out onto DVD-R and VHS under the title The Demon in Miss Jones, which has nothing to do with the film but did make for catchy ad copy.

For the uninitiated, the story of Widow Blue revolves around a pair of highly dysfunctional marriages. Nick (Elliot) is a foul-tempered jerk prone to complaining about the lousy breakfast served by his wife, Elise (Dempsey), who takes off to roll in the sheets with her secret lover (Cassidy) in the film's sole softcore scene. Meanwhile Nick decides to go out and spend some quality time in his car with a meat cleaver, which he decides to bring over to the house of his girlfriend on the side, Eva Blue (Wescott). However, Eva's husband, Jerry (Davis himself), is busy rutting with his brother-in-law, Marshall (Fires Down Below's Lish), who have secretly had the hots for each other for two years. Their session is cut short mid-coupling when Nick pops in to plant the cleaver in Jerry's neck, spraying blood all over Marshall and a clearly turned-on Eva who then has sex with both men while they halfheartedly 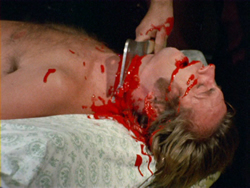 try to dispose of the body. With a giant coffin now taking up space in the living room, their plans to take off for Rio are further foiled by the arrival of a pair of swingers (including Holmes, who for once barely makes any impression at all) and eventually Elise herself, who provides a show-stopping, bloody finale no viewer has ever forgotten. 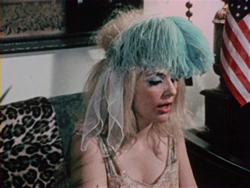 playing by the rules, and once the blood starts splashing all over the screen, the only possible response is to shake your head in disbelief. It's also notable as a rare leading role for Elliot, who turned up in a handful of other hardcore efforts but was more familiar for drive-in staples like Brain of Blood, The Notorious Cleopatra, and The Danish Connection. Of course, it's also always fun to see Dempsey in anything; though she doesn't have a lot of screen time outside of the bookends, she makes the most of her goofy character and, of course, meets an indelible fate unlike anything else in her filmography (or anyone else's). It's nothing close to a "good" film in any traditional sense at all, but anyone who wants to jump way in the deep end of crazed '70s cinema will really meet their match here. The new Vinegar Syndrome transfer (uncut and finally with the original opening credits fully intact, Mancini music and all) looks the best of the three films, probably because the negative hasn't been touched in decades and the lighting is easily the brightest of the three. How this film could look this good is a question that will continue to haunt mankind through the ages.

The second disc features the last Davis film in the set, Oh! You Beautiful Doll, which used to be 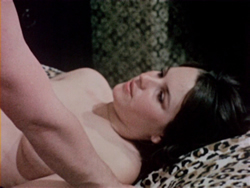 available from Something Weird in a very washed out transfer and had the misfortune of turning up under the title Star in After Hours' Grindhouse Trash Collection Part 3: How to Make a Dirty Movie, which censored virtually all of the (considerable) frontal nudity. The Vinegar Syndrome transfer of this very cheap-looking softcore film is easily the best to date (relatively speaking) and completely uncensored, with Keith Erickson acting like a ham bone in more ways than one. Cleo O'Hara makes a welcome return here and takes center stage as an over-the-hill Hollywood actress who now offers acting lessons from her home, with her latest applicant (Lane) receiving special instructions from her on the couch after his girlfriend gets kicked out. Also on hand is her flamboyant director, Rodney Lecoq (Erickson), who gets a couple of auditioning girls to go all out in front his camera at her house. What seems like an excuse for a quartet of 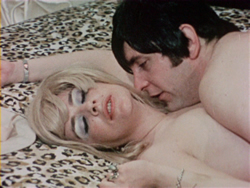 minor sex scenes is actually a really fun attempt by Davis to capture the strange, snappy attitude of the Paul Morrissey / Andy Warhol films of the time, especially Heat; as usual, O'Hara gets top honors here and makes the most her grotesque make up and wigs as a fallen starlet on the skids. Weirdly, the exact same cast also appeared in the ridiculous hardcore film Twin Brothers, which was never credited to Davis but feels an awful lot like his handiwork.

Also included on disc two are the special features including trailers for Evil Come Evil Go and Oh! You Beautiful Doll (which contains some pretty graphic alternate shots) and a four-minute reel of bloody outtakes from Widow Blue (mostly from Jerry's murder scene). The most substantial extra is a fascinating 22-minute interview with Bob Chinn, who talks about working with both Walt Davis and Manuel Conde including the latter's creation of a Johnny Wadd film using trimmed footage from another film, the inspiration for Evil Come Evil Go, John Holmes rounding up smelly animal guts for one death scene, and a hilariously raunchy anecdote about O'Hara's anatomy. Another direct hit from Vinegar Syndrome, this is strong stuff of course but a wild trip worth taking with a name often completely overlooked in the history of vintage sexploitation.