In 1967, monster movie fanatics and FX devotees Dennis Muren and David Allen joined forces and pulled out all the stops for a wild, surprisingly influential creature feature entitled The Equinox... A Journey into the Supernatural. Equipped with an amateur cast, future effects maestro Jim Danforth, a small role for beloved horror/sci-fi writer Fritz Leiber (Conjure Wife), plenty of imagination, 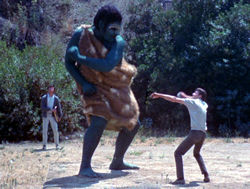 and absolutely no budget whatsoever, they beat the odds and completed their engaging tale of an asylum inmate, David Fielding (Connell), who has lived in a state of panic for one year after venturing into the woods with three friends to visit a venerable college professor, Dr. Waterman (Leiber). What they encounter instead is an eerie, desolate area with no cabin or professor to be found, but a mysterious book soon unlocks a series of colorful monstrosities and transdimensional passages which threaten the youths' lives and the fate of the entire world.

An unabashed homage to classic monster films ranging from King Kong to Ray Harryhausen's fantasies, Equinox in turn went on to become a favorite of fledgling filmmakers and provided the obvious model for Sam Raimi's Evil Dead series. The version released to theaters, simply entitled Equinox, is something of a patchwork effort by producer Jack H. Harris (The Blob), who tweaked the story by replacing the title sequences, recruiting the actors again for additional and alternate scenes, 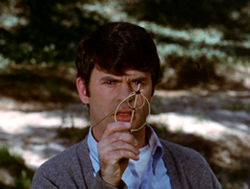 adding a sinister role for new co-director Jack Woods, and tinkering with the entire sound mix while adding in a few extra trippy optical effects. Though the essential story is the same in both versions, their numerous variations make for a fascinating case study in the differences between a polished commercial release and a rough-hewn labor of love. The film in either incarnation is still obviously flawed (mainly the performances and some budget-starved effects shortcuts), but the pluses definitely outweigh the minuses with lots of fun effects work unleashed for the audience's amusement. In particular, Danforth (still a few years before Flesh Gordon) acquits himself nicely with some startling visuals that outdo the efforts of many Hollywood technicians from the same era.

In the works for years, Criterion's lavish two-disc edition of Equinox is an enthusiastic tribute to this horror buff's delight and a testament to their ability to do justice even to low budget horror titles when they feel so inclined. The released version gets an entertaining commentary track with Harris and Woods, who talk about their professional experiences during the period and offer a thorough breakdown on the various surgical methods undertaken to produce the Equinox we know and love today. Then the original 1967 version features a track editing together comments by Muren, McGee and Danforth, who obviously go into much more detail about the project's origins, the FX wizardry used for the impressive menagerie of creatures (including a great flying demon and a memorable caveman), and various anecdotes about the location shooting. The first disc also contains an introduction by Famous Monsters of Filmland's legendary Forrest J. Ackerman (heard in a brief cameo in the film itself), 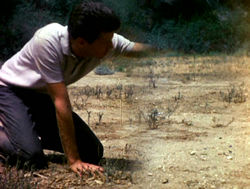 who talks about the film's surprising origins related to his beloved magazine.

Disc two packs in plenty of additional material, starting with a hefty video-oriented look at the film's creation: a silent, seven-minute reel of outtakes from the production, some very entertaining test footage of the ape beast (called the Taurus by its creators), a seven-minute Muren interview in which he (somewhat redundantly) covers his memories of monster movies and the creation of Equinox, and a nine-minute featurette of cast interviews (featuring Hewitt, Duron, and future WKRP in Cincinnati actor Bonner). An earlier silent student film by Kevin Fernan, "zorgon: The H-Bomb Beast from Hell," is an amusing bit of monster goofiness featuring all three of the main behind-the-scenes men from Equinox as well as early work by Rick Baker. A "Dave Allen Appreciation" nook within the disc contains an animated fantasy entitled "The Magic Treasure" (plus an essay about the film by James Duron), Allen's wild '70s Volkswagen commercial with King Kong (plus silent test footage), and a Chris Endicott essay about Allen's animation career entitled "Kong at Cascade." The exhaustive "Equiphemera" area, which is broken into several sub-categories, features a huge amount of visual and written material about the film, including plenty of essays, stills, production shots, and much, much more; prepare to feel your remote finger going numb after this one! Finally you get the original theatrical trailer (which is quite good) and two fun radio spots, plus a booklet featuring remarks by George Lucas and Ray Harryhausen plus notes by Brock DeShane.

As for the image quality of the feature itself, the Jack Harris version looks as pristine as it possibly could; colors and detail look just about perfect, and any visual deficiencies are inherent in the original film elements and only add to the charm. The 1967 version obviously looks rougher and even resorts to dupey-looking VHS inserts for a handful of quick shots, but overall it's quite watchable and a very welcome inclusion. Anyone interested in the film's Evil Dead connection will note that the unreleased version bears even more of a resemblance to Raimi's first film, right from its moody opening titles of a ticking grandfather clock ticking away in blackness.