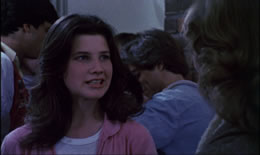 A no-budget oddity that popped up in theaters around the world under the titles The Dorm that Dripped Blood and Pranks, this 1982 slasher film (basically a feature-length UCLA student project) marked the debut of the three-film team of Stephen Carpenter and Jeffrey Obrow, who went on to make the special effects-laden The Power and The Kindred before each went solo for such films as Servants of Twilight and Soul Survivors. However, this film remains their most famous among horror fans, both for its catchy title and its wonderfully unexpected final act, a nifty bit of fancy narrative footwork that obviously inspired the much later and significantly gorier Intruder.

The plot iself is basically yet another riff on Black Christmas as a small band of five college students is left to hang around an old dorm building scheduled for demolition. Plenty of suspicious characters are hanging around (though no one plays any pranks at all, oddly enough), and soon young Debbie (a young Daphne Zuniga in her first film, way before Spaceballs and The Sure Thing) gets offed along with both of her parents when she decides to take off. The fact that this sequence manages to integrated a spiked baseball bat, a tire head crushing, and strangulation in less than five minutes deserves some sort of award. The student in charge of the clean-up, Joanne (Lapinski), has "final girl" written all over her, and it's down to a decreasing number of male suspects (including a fried-hair freak played by the oddly-named "Woody Roll") thanks to implements like a power drill and a huge deep cooker before the big reveal and climactic showdown. 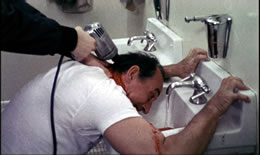 Like a lot of its slasher ilk, The Dorm that Dripped Blood is often wildly illogical and features a magical teleporting killer who wouldn't be outdone until the much later Scream 2; however, it's also a lot of fun if you're in the right mood thanks to some extremely bloody and even shocking kill scenes and the aforementioned final payoff, which alone is worth the protracted scenes of people wandering around in the dark. The film is also significant as the first film score by Christopher Young, an underrated (and extremely nice) talent who went on to Hellraiser, Species, Urban Legend, The Grudge, and Drag Me to Hell. Oddly enough, the soundtrack has been easier to find for years than the actual film.

Originally shot in 16mm under the title Death Dorm, the film was trimmed significantly to get an R rating (particularly the cranial drill murder in the bathroom) and eventually shuffled around under its more famous release titles. A sorry-looking Region 2 version (as Pranks) was further cut, omitting the drill murder completely and suffering from such a muddy transfer it was often impossible to tell what was going on; rather than at least going to the R-rated cut released on VHS from Media in the '80s, a certain notorious bootleg outfit in the US ripped that disc for their own version, which is now thankfully out of circulation. 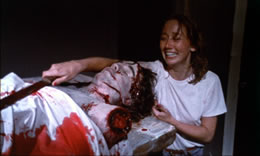 Against the odds, Synapse somehow managed to dig up a surviving 35mm answer print for the original uncut version entitled Death Dorm, unseen by audiences at all before now. Their dual-format release includes a DVD and a Blu-Ray, with the latter definitely the version of choice if you can play both. Considering we're talking about a 16mm film blown up to 35mm in the early '80s, don't expect anything slick and super pretty; however, this is by far the best this film has ever looked (and no, it didn't look great in the theater either). Interestingly, this is also the bluest transfer to come along since William Friedkin's Cruising, which actually suits the grim mood of the film just fine. There's nothing to fault in the level of detail here, and you lots of that chunky '80s grain without the havoc caused by compressing it down to standard def that would have turned into digital noise. The DTS-HD audio does what it can with the fairly thin original sound mix; Young's score sounds just fine, and the dialogue is clear enough.

You want extras? You got 'em. Obrow and Carpenter chime in with an interesting audio commentary for the main feature in which they talk about its origins and how they rounded up talent on campus, why they chose to start off with a horror film while everyone else was doing experimental art films, and how the film went through different permutations on its way to an official release. You also get the isolated score if you don't have the CD already, two theatrical trailers under both of the release titles, as well as two featurettes. "My First Score" features Young at a mixing deck talking about how he lobbied to get his first scoring gig on this film and the "stinger" techniques he still employs today; he doesn't really mention any of his later horror scores that came out of this one, but it's a good, short chat and worth watching. "My First Slasher" features make-up effects creator Matthew Mungle talking about creating gory, practical death scenes with very limited resources, as well as his disappointment when much of his work wound up on the cutting room floor upon its release. There's some really funky green screen work here that makes the back of his skull look like it's being nibbled on by the black background, but otherwise it's a nice (and atmospherically shot) featurette as well. Like the original My Bloody Valentine, this is definitely a long-awaited and essential title for any '80s gore fans who always wanted to see how brutal this film was before the heavy blow of censorship struck it down.