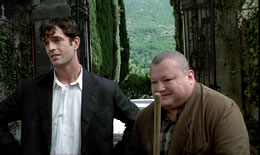 A sheltered cemetery keeper, Francesco Dellamorte (Everett), guards the gothic resting place for the dead in the small town of Buffalora. Accompanied only by his monosyllabic, mentally deficient helper, Gnaghi (the amazing Hadji-Lazaro), our hero must deal with the living dead, who rise from their graves within seven days after being buried, by shooting them in the head or braining them with a spade. A beautiful and mysterious young widow (Falchi) comes to visit one day, and afterwards Francesco's life is never the same as events go from peculiar to nightmarish...

The last genuine classic of Italian horror cinema, Dellamorte Dellamore features a twisty narrative lifted from a novel by Dylan Dog's Tiziano Sclavi and is that rarest of beasts, a '90s Italian horror film that actually received a (belated) theatrical release in America. (In fact, only a couple of Dario Argento films enjoyed the same fate, and that was years later.) Dellamorte Dellamore (literally "Of Love, Of Death") had all the makings of a major cult item but instead has quietly startled viewers through word of mouth and random TV airings, often under the clumsy title of Cemetery Man. The real star here is director Michele Soavi, who cut his teeth acting in '80s horror films and learned his trade directing previous films under wings of Joe D'Amato (Stage Fright) and Dario Argento (The Church, The Sect), along with AD work for Terry Gilliam on The Adventures of Baron Munchausen. His baroque and often witty visual sense reaches its pinnacle with this film, which combines sets and visual compositions worthy of Mario Bava with quirky gags reminiscent of Brazil. The first twenty minutes alone is a masterpiece of visual storytelling, and the jarring, haunting final scene cannot be easily forgotten. Composer Manuel De Sica (The Garden of the Finzi-Continis) contributes an atypical electronic score reminiscent of Tangerine Dream which integrates perfectly within the film's bizarre, dreamlike texture. As philosophically rich and sensually aware as it is filled with zombie-blasting mayhem, Dellamorte Dellamore is truly unlike any other film in European cinema. Everett delivers one of his best, non-campy performances; his morose, sarcastic, yet oddly romantic hero is truly a representative figure of our "jaded" modern times, while the stunning Falchi deservedly earned a cult following for her memorable three(!) roles and showstopping nude scenes. Not a film for all tastes, to be sure, but it's easily the most significant Italian horror title of the past decade. 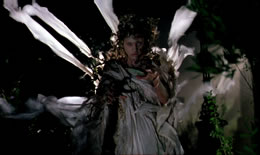 The first time many Americans saw Cemetery Man was via a US videotape and laserdisc transfer released by Fox, a nearly unwatchable mess badly cropped on all sides of the screen and annoyingly fuzzy to boot. The previous Japanese laserdisc was letterboxed more accurately and sported a nice surround track but suffered from pasty, washed out flesh tones. Both of these were mildly supplanted by Laser Paradise's "Red Edition," which comes closer to the framing of the European release, and the flesh tones are much richer and more dimensional. The audio is about the same, with the music in particular often overpowering the rear and front speakers. The disc also includes an amusing German trailer as well as an assortment of trailers and clips for titles like Stage Fright, Brain Dead, and Army of Darkness. The best standard def option by far is the Italian DVD from Medusa, which features dead-on framing, is anamorphic, and sports the best picture quality of the bunch; as an added bonus, it features both the English and Italian audio with optional English subtitles. It's a bit of a toss-up between the two versions; Everett's melancholy real voice is definitely a major plus, but the rest of the actors are dubbed which is handled a bit better on the Italian version. It's really your call. Extras here include a

17-minute making of featurette (in Italian), a Soavi and Gianni Romoli (also Italian only), a trailer, cast and crew bios, and liner notes. Much later and less satisfying is the much-delayed and now discontinued American DVD from Anchor Bay, licensed from Fox, which features a vastly inferior anamorphic transfer with a gray, drab veneer and far duller colors, not to mention much more print damage; on the other hand, you do get (apart from the carried-over Italian trailer) a making-of featurette (with Everett, Falchi, Romoli, and FX maestro Sergio Stivaletti), and liner notes by Mike Felsher.

However, obliterating all of these versions in picture quality alone is the Italian Blu-Ray from Cecchi Gori, which features far more detail and depth than standard def could possibly capture. It also blows aware the mediocre American theatrical prints, too, and features the same fantastic color schemes found in the previous Italian DVD release. Once again the 1.66:1 framing looks perfect here, and the jump in clarity reveals plenty of nifty details in the production design including some hilariously nationalistic Italian flags stuck here and there. It's a marvelous presentation and definitely essential for anyone who can play Region B-encoded titles (so if you don't have a target="new">region-free Blu-Ray player, now might be the time to pony up). The PCM audio is presented in both English and Italian, with optional Italian subtitles which can be switched off when playing the English version. (No English subs here, however, so anyone with the Medusa disc may want to hang on to it anyway.) The same Italian extras are ported over (featurette, commentary), though once again these are not English friendly; on top of that you also get two newer video interviews with Soavi and Romoli ("Conversando Dellamore" and "Conversando Dellamorte"), "Tiziano Sclavi raccontato da Luca Crovi," a video look at the popularity of Dylan Dog ("Quel fenomeno di Dylan Dog"), a retrospective video montage of a Dylan Dog horror fest and onstage recreation, and a photo gallery, not to mention bonus trailers for Wild Beasts, Satanik, Killing Birds, and the great, underrated Queens of Evil. No matter how you see it, though, this is a must for anyone with even a passing interest in the best Italian horror has to offer.