Though it doesn't get called out too often, this glossy giallo was a turning point of sorts for the subgenre as it used international star power and the backing of a major studio release in an attempt to appeal to the masses. Often veering closer to a soapy woman-in-peril yarn than a traditional murder mystery, it's mostly entertaining as a cavalcade of late '60s pop art tropes and beautiful scenery with a little inconvenient attempted murder and blackmail thrown in now and then.

American actress Carroll Baker had been a short-lived sensation in her native country with the scandalous Baby Doll and the slick, super trashy The Carpetbaggers, so it makes sense that she would hop over to Italy to star in a string of opulent sexy thrillers. This was the first one out of the gate and found her appropriately matched with Belle de Jour heartthrob Jean Sorel, with whom she reunited two years later for one of Umberto Lenzi's more low-key gialli, A Quiet Place to Kill. Baker was arguably the queen of the giallo for a while (at least until Edwige Fenech took over), racking up a solid roster of titles including the box office hit Paranoia for Lenzi, with whom she also appeared for

Knife of Ice and So Sweet... So Perverse.

we find Baker in pre-Lenzi territory as Deborah, an American jet setter whose apparently sweet body has just been married off to a French-Swiss fellow named Marcel (Sorel). Now they're off for a honeymoon at his old Swiss stomping grounds in Geneva, where they spend their time making love in the shower (and occasionally in a bed) interspersed with trips to the local discotheque. Things get fishy when an old pal of Marcel's, Philip (Bay of Blood's Pistilli), turns up in a foul mood because Marcel's ex, Suzanne (Stewart), killed herself after he dumped her to run off to the United States. An investigation into Suzanne's final whereabouts turns even more sinister when Deborah is plagued by menacing phone calls saying she's next on the death list, kicking off a chain of double and triple crosses that only the Italians could accomplish.

Much of the credit for this film's appeal has to go to screenwriter Ernesto Gastaldi, an incredibly prolific writer who later incorporated elements of this plot into his scripts for Forbidden Photos of a Lady above Suspicion, The Strange Vice of Mrs. Wardh, and especially So Sweet... So Perverse.

despite the threats to her happiness. And look at that cast! In addition to the ones listed above you also get a small but pivotal turn by George Hilton, who would go on to star in a string of major '70s gialli including some of the best Sergio Martinos (or would that be Martini?). Composer and noted vocalist Nora Orlandi also provides an entertaining lounge soundtrack, too, complete with some fun club dancer numbers; it's no wonder she was brought back to do Double Face and Mrs. Wardh. This also marked the giallo debut for director Romolo Guerrieri, who was mainly known for spaghetti westerns but did a decent enough job here to come back for more crime thrillers and gialli, most notably the excellent and tragically underseen The Double (also starring Sorel).

Despite a splashy theatrical release by Warner Bros./Seven Arts in 1969, this film has essentially vanished from view in English-speaking countries with only a tiny handful of home video releases during its entire history. The film made its DVD bow from Sweden courtesy of Fin De Siècle, which is mainly worth

having for the original English-language track with Baker and Sorel's original vocal performances (which were entirely shot in English). Unfortunately it's a disaster on the visual front with far too much contrast and way, way, way too much zooming on all four sides, obliterating important information and turning the compositions into an awkward mess full of cropped hairlines and missing noses. A substantial amount of nudity gets lost in the process, too, which just adds more insult to injury. The sole extra there is a stills gallery.

Much more satisfying is the 2015 German Blu-ray/DVD Mediabook release from X-Rated Eurokult, which boasts an entirely different and far superior HD transfer with all the colors and contrast levels back where they should be. It also features the most image information on every side to date, looking nice and spacious throughout. A glance at the two sample grabs below from the DVD should give you an idea of how substantial the upgrade is. The opening titles have a somewhat odd video-processed look to them for some reason, but after that it's smooth sailing all around. The one debit is that the English track is MIA here, with English subtitles provided instead for the Italian and German audio tracks. It's not a huge deal, but watching the film without the leading actors' familiar voices feels a little peculiar. Limited to 444 units, the release also comes with an 8-minute video appraisal (German only) by Dr. Marcus Stiglegger, the fun Italian theatrical trailer (the U.S. trailer finally turned up on Grindhouse Trailer Classics 4), the German opening and closing credits (versus the Italian ones in the main feature), separate galleries of German and French lobby cards and posters, and one very cool unrelated bonus, a striking German trailer for The Perfume of the Lady in Black that hasn't popped up anywhere else.

Frame Grabs from the Swedish DVD 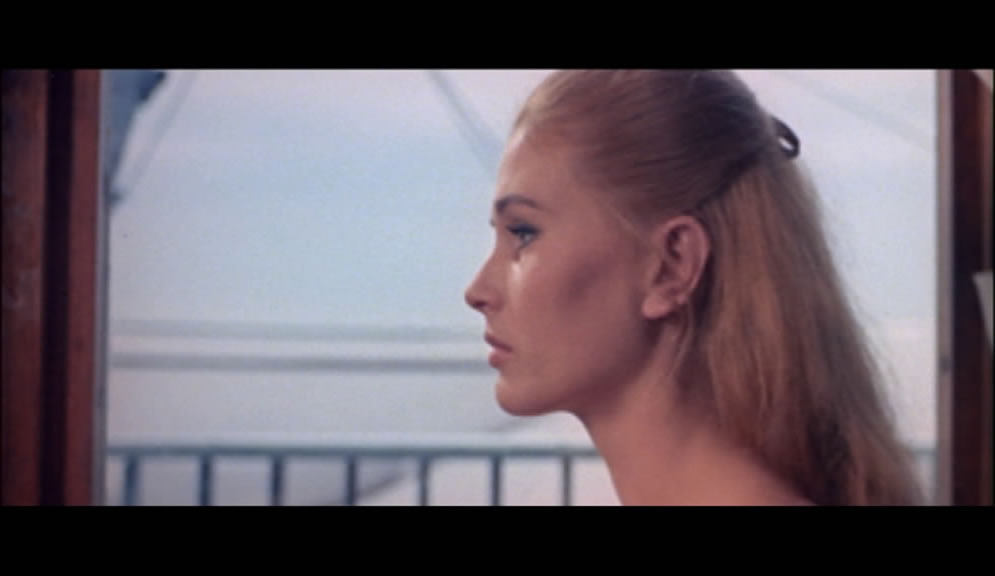 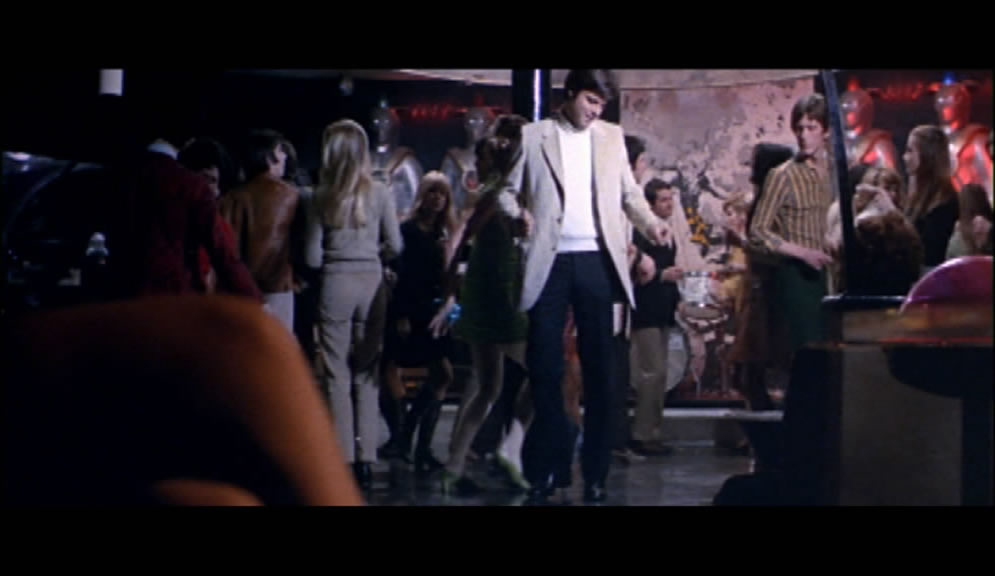