TARKAN VERSUS THE VIKINGS

Thanks to the dilligent efforts of the forces behind Mondo Macabro, not to mention a few enthusiastic members of the bootleg video community, Turkish cinema has become an increasingly popular brand name for "great party movies." Like the berserk genre hybrids pouring out of other countries 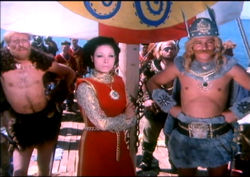 like India and Thailand, Turkish films often take their inspiration from Western box office hits while adding their own unique spin; thus, carbon copies of Star Wars and The Wizard of Oz become delirious exercises in mind-melting lunacy. Probably to avoid possible litigation, Mondo Macabro chose two quite original "Turkish pop cinema" classics to indoctrinate Western audiences rather than the more famous and obvious remakes, though there's still no shortage of jaw-dropping activity on display here.

First up is The Deathless Devil, a budget-impaired but creatively bountiful superhero yarn that feels like part of an ongoing serial with most of the plot left by the wayside. Basically each escapade involves an ongoing battle between the wonderfully named Dr. Satan (Mutlu), a heavily-mustached villain with designs on controlling mankind with the aid of clunky robots, and Copperhead (Tulgar), the latest in a line of noble superheros who's just discovered his true identify from his "normal" adopted dad. When not distracted by shapely ladies or the presence of Bitik (a wildly overacted comic sidekick with a Sherlock Holmes fetish), Copperhead leaps on and off of planes and gets into countless fisticuffs to stop the evil doctor from carrying out his plan, which 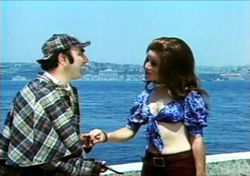 seems to involve tying people up in his warehouse and sneering a lot.

Now going back a few centuries, witness the daring exploits of Hun barbarian good-guy Tarkan (Tibet), who roams the land with his dog companion, Kurt. When a Viking raid leaves many of his compatriots dead or kidnapped, Tarkan embarks on a quest for justice against the Vikings, who plan to sacrifice the Hun king's daughter to a giant rubber octopus that lives in the ocean beside their castle. Throw in some slinky Chinese spies and plenty of action derring-do, and you've got one truly crazed period piece not soon forgotten. Based on a comic book, this is apparently the fourth in a continuing series of Tarkan adventures; hopefully we won't be deprived of the mighty Hun's further exploits somewhere down the road.

Proving that low budget doesn't mean boring, both films make the most of their limited costume and set resources to craft fast-paced, riotous experiences with some of the most deliciously hammy villains this side of Snidely Whiplash. Most of the music is either pilfered from handy libraries or even familiar composers (John Barry and Henry Mancini seem to be the popular favorites), and the pop culture references 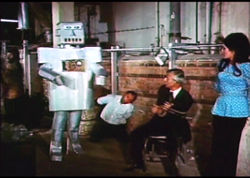 fly fast and furious (with the aforementioned Sherlock Holmes freak and Santo-inspired superhero masks standing out as the most ridiculous). Don't expect much in the way of high art, as the filmmakers rarely venture beyond simple nail-it-down-and-shoot aesthetics; this is pure guilty fun all the way, best viewed with lots of popcorn and beer at hand.

Mondo Macabro's DVD offers plentiful disclaimers about the video quality for both features, which had to be culled from video masters since the Turkish film industry apparently isn't too big on preserving its film elements. That said, both open matte transfers are quite watchable if obviously dated and a tad soft in appearance. Tarkan fares slightly better overall, and at least they're both significantly better than the usual Turkish bootlegs one sees floating around. Optional English subtitles move at a nice, readable clip, and the mono audio does what it can with the thinly recorded music tracks.

Not surprisingly, the prime extra here is an episode on Turkish cinema from the great Mondo Macabro UK television program, featuring interviews with many of the principals interspersed with mind-boggling footage of gems rarely seen by English-speaking viewers. MM's Pete Tombs also provides a couple of handy, informative essays providing some much-needed context, polished off with the company's usual promo reel of other titles. You really, really need this one, folks.