The American South has a strange history with horror movies. North Carolina had its day in the sun with all those Dino De Laurentiis/Stephen King projects (not to mention Hellraiser III), while Georgia had Squirm and Kiss of the Tarantula. And let's not even get into Florida, which spawned the H.G. 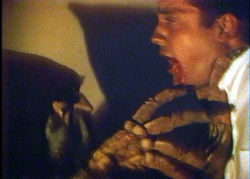 Lewis gore trilogy, and Texas with its chainsaw massacres and S.F. Brownrigg. But what about South Carolina? Yes, they got their turn as well with Campfire Tales, a direct-to-video horror anthology featuring Gunnar "Leatherface" Hansen as a bearded coot telling scary stories to a handful of kids around a fire. The first yarn is another retelling of that popular urban legend, "The Hook," except this time the couple (Lora Podell and Johnny Tamblyn) winds up getting gutted in juicy detail instead of driving off. The second, "Overtoke," is a silly tale about a couple of stoners who pick up some really good weed... that turns them into a gory mess. Things pick up considerably with "The Fright Before Christmas," a Tales from the Crypt-style holiday yarn about young Steve (Paul Kaufmann) who offs his mother (Barbara Jackson) by tossing her down the stairs, only to be confronted with Santa-err, Satan Claus, an axe-wielding ghoul with his own gruesome form of Yuletide cheer. Finally we close with the most elaborate story of the bunch, "Skull and Crossbones," a pirate romp that starts off like a retelling of Edgar Allan Poe's "The Gold Bug" but 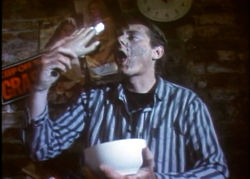 Despite the immediate presence of Hansen, Campfire Tales may be a bit difficult for jaded horror fans to warm up to; the first half hour or so is standard zero-budget fare with only an unusual amount of gore to distinguish it. Stick with it, though, and you'll be well rewarded; the last two stories really pay off with a fine mix of storytelling, grue, and sick laughs; coupled with some atmospheric camerawork and nifty monster effects. Directors Cooke and Talbot show a definite flair for pulling chills from a threadbare budget, and their affinity for horror anthologies continued in 1995 with the less satisfying but interesting Freakshow, reuniting them with Hansen. Here's hoping they step behind the camera again, as these guys could easily become the Amicus of our digital video generation. 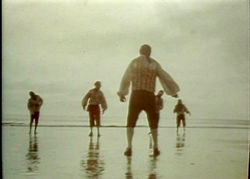 In visual terms, Sub Rosa's DVD is barely an improvement over those old VHS tapes found in mom and pop video shops; probably culled from the same master, the picture looks very soft with indistinct color and pasty black levels. It's watchable in a throwback sort of way but nothing to get excited about; considering the film was shot cheaply and shuffled straight to video anyway, it's difficult to assess whether it could possibly look any better. Audio is also coherent but very limited. However, fans and casual interested parties will still prefer the DVD for the audio commentary by journalist Mike Watt, who discusses the creation of the special effects, the stories behind the various non-professional actors (some recruited from local theater), and various anecdotes about the shooting. Also included is an unrelated black and white short, "Tenants," sort of a gothic character piece with optional commentary from its directors as well.