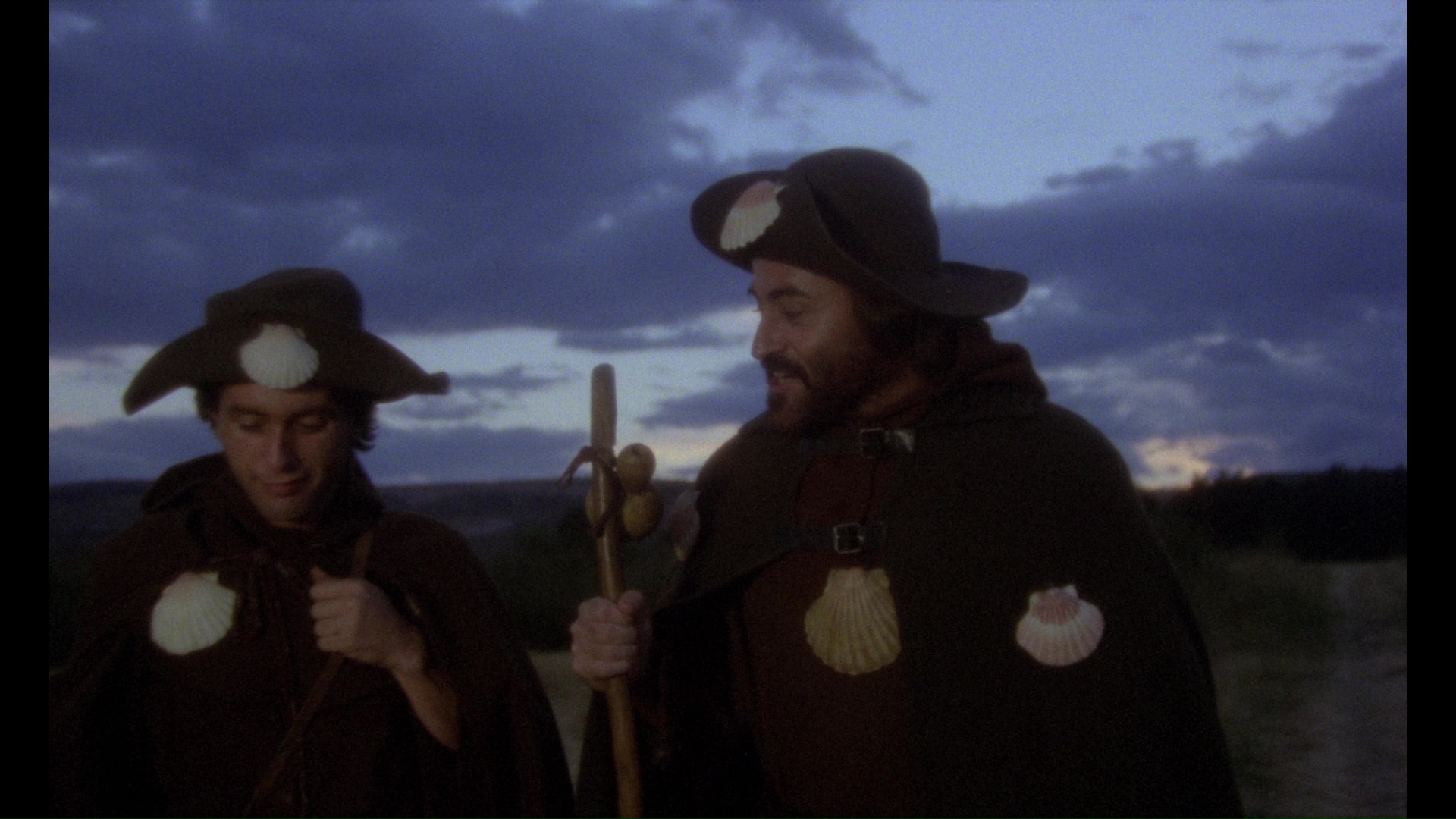 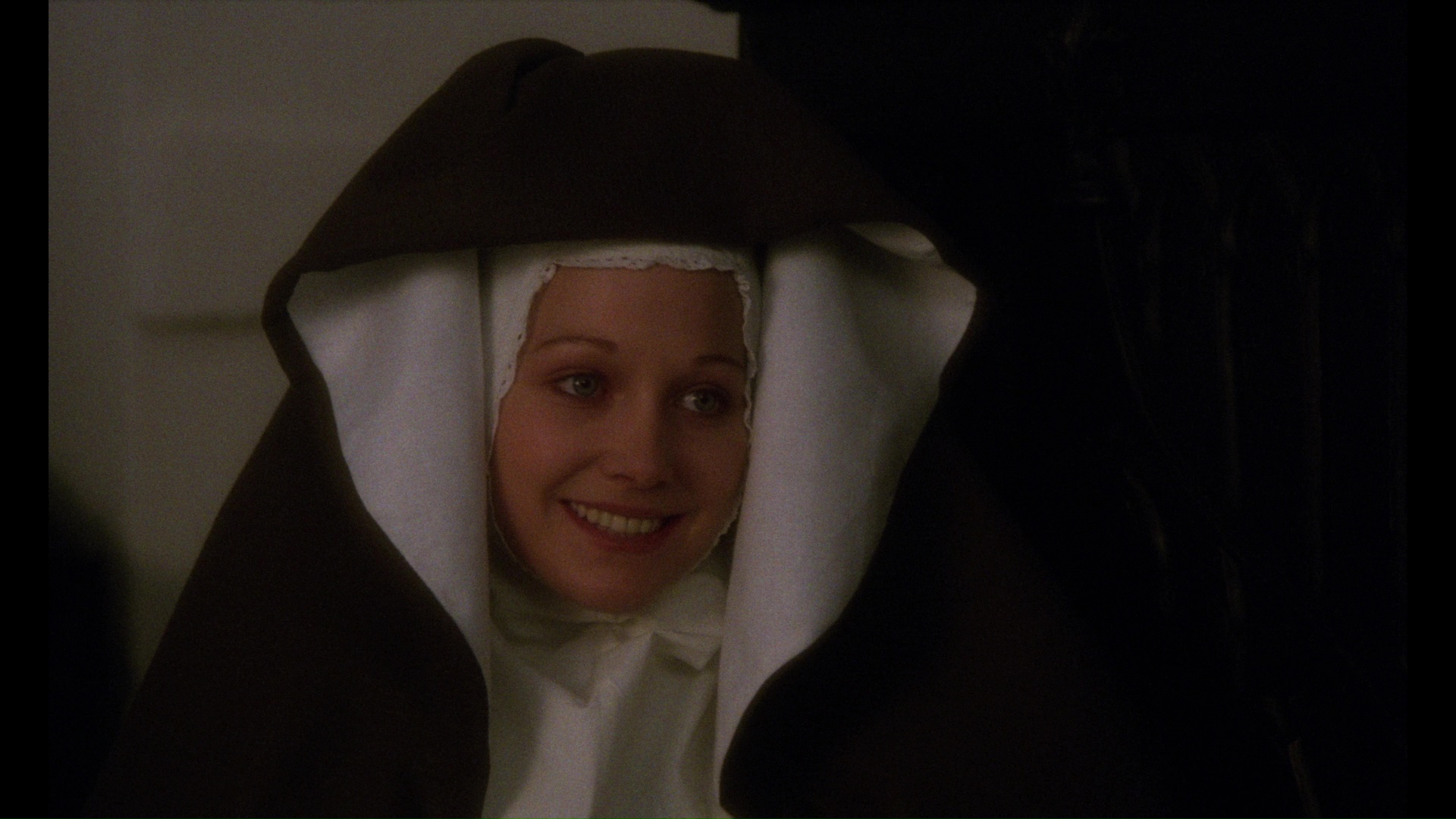 often lumped in with the many other Spanish horror films starring and/or directed by the great Paul Naschy (if it's even recognized at all), El Caminante -- or The Devil Incarnate, as it's been titled for its American home video debut -- is one of the country's great cinematic gems still awaiting worldwide rediscovery. Naschy himself often referred to the film as a key entry in his body of work and perhaps his best, and while it may have some obstacles to overcome from those expecting a more traditional supernatural outing, it is indeed a tale full of imagination and wit complete with a misanthropic but gripping view of the world then and now.

Appearing one afternoon in the countryside, bearded wanderer Leonardo (Naschy) casually murders the first person he encounters and swipes his gold after a personal verbal slight. He then decides to take young, innocent Tomás (Rocha) under his wing for a picaresque string of encounters in the region that illustrate Leonardo's personal views about the easy corruptibility and inherent soul-selling nature of mankind. Leonardo has a particular affinity for taking sexual advantage of the women they encounter, be in a married, crippled farm wife (Aguilar) who ends up getting robbed and having an inverted cross carved on her bare behind (inspiration for the film's most familiar poster art) or making a vicious deal with the widowed Aurora (Lezana) to heal her sick daughter in exchange for carnal favors. Everyone comes out worse after crossing paths with the pair, with even Leonardo himself learning the cost of being human even when his true nature is revealed. 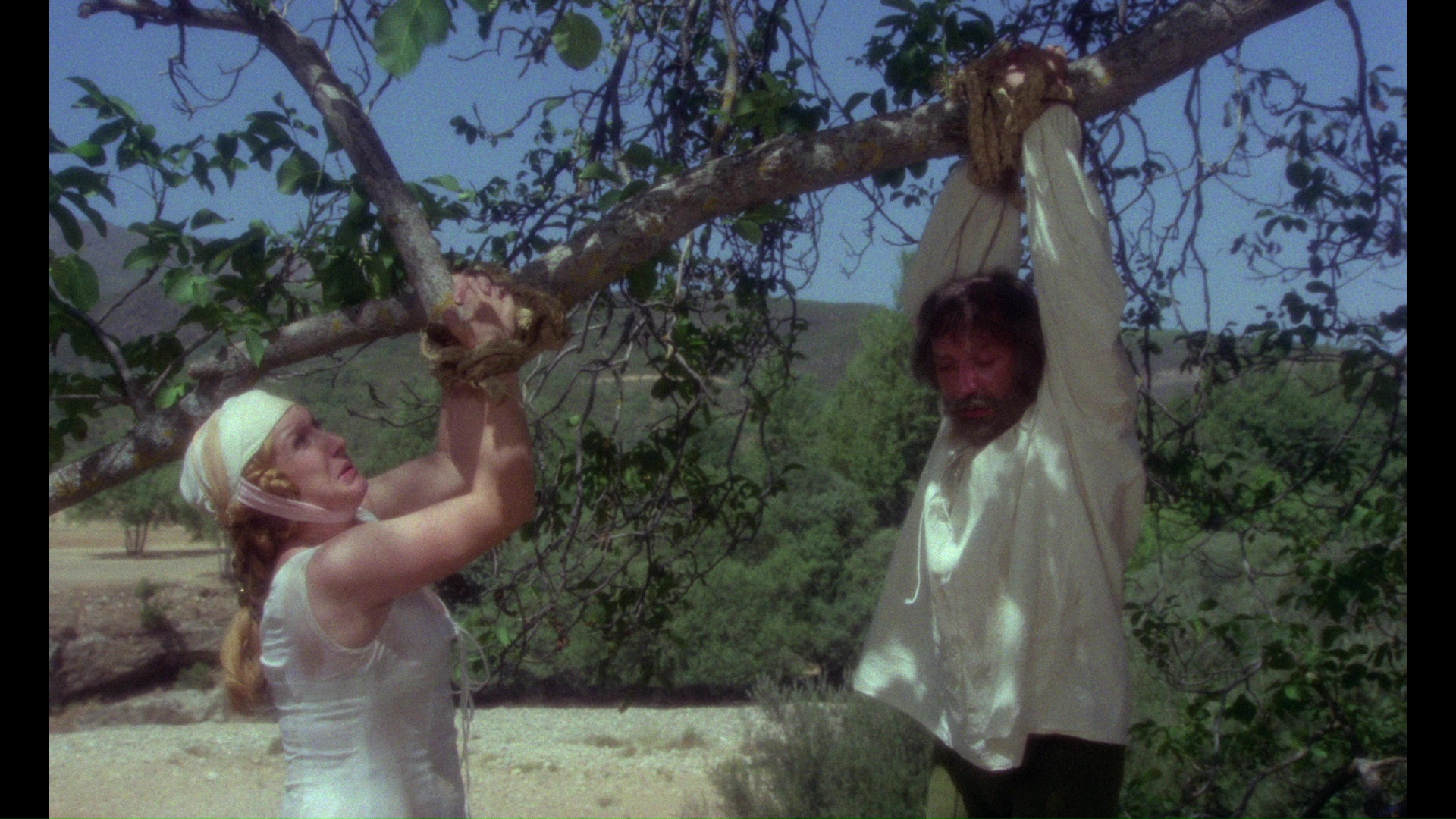 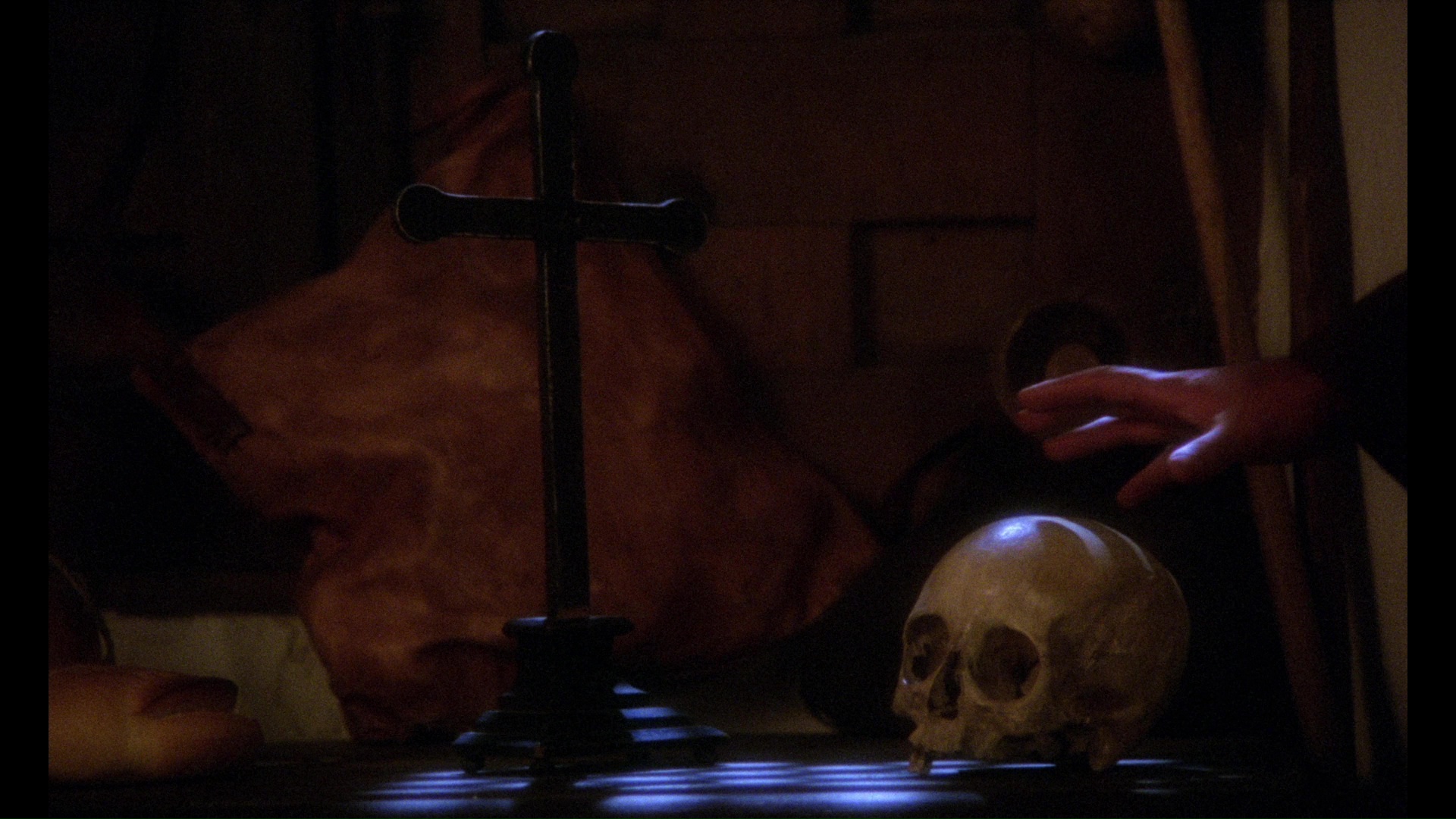 a dark spiritual force at work in this story isn't a major shock when it's revealed at the end, with blatant clues dropped along the way and Naschy making inventive use of blazing, rose-colored light when Leonardo's up to his nastiest shenanigans. It's really the decision to tell this story with such a heavy vein of sardonic humor that comes as the biggest surprise, with the frequent sex scenes justified by the plot as well as a way of celebrating the freedom of storytelling in the recent collapse of heavy Spanish censorship. It's also a beautifully mounted film with a fine eye for color, costumes, and decor, accentuated by a fine score by Angel Arteaga. Interestingly, this could have easily been a religious scare film with just a couple of artistic tweaks, but in Naschy's hands it's more complex and challenging than anything so simple. Some of his flourishes bite off a bit more than they can chew (a sped-up comical sex romp and some freeze framing feel out of place), but others are audacious enough to work against the odds like a chilling intrusion of newsreel footage as a vision of the future.

Never released theatrically outside of Spain, The Devil Incarnate was a mystery title on Naschy's filmography for most English-speaking fans for a very long time until fan-subtitled copies started popping up from fuzzy VHS copies and later off of a very brief Spanish DVD release. The Mondo Macabro Blu-ray, culled from a new 4K scan of the original negative should prove to be a real eye opener for many viewers as it features a sterling presentation of a film that's proven very tricky for standard definition to handle in the past. The stylizing lighting, occasional heavy filters, and elegant pastoral landscapes really 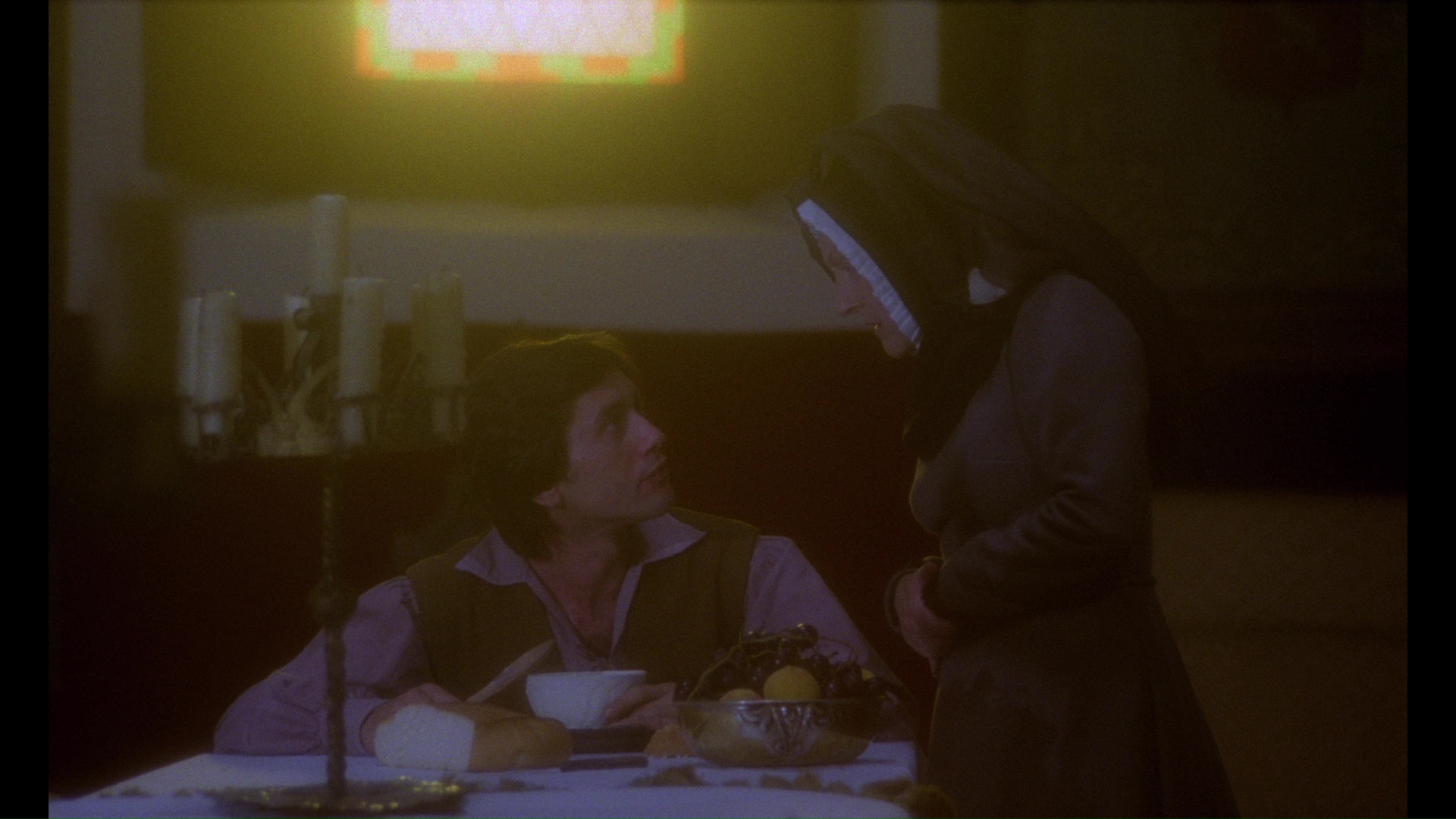 need all the resolution they can get for the full effect, and this is the first version that really seems to capture the feel of what Naschy was going for. The LPCM Spanish mono audio also sounds excellent, and the optional English subtitles are generally good but contain more typos than usual ("You a fever" being one puzzling example). 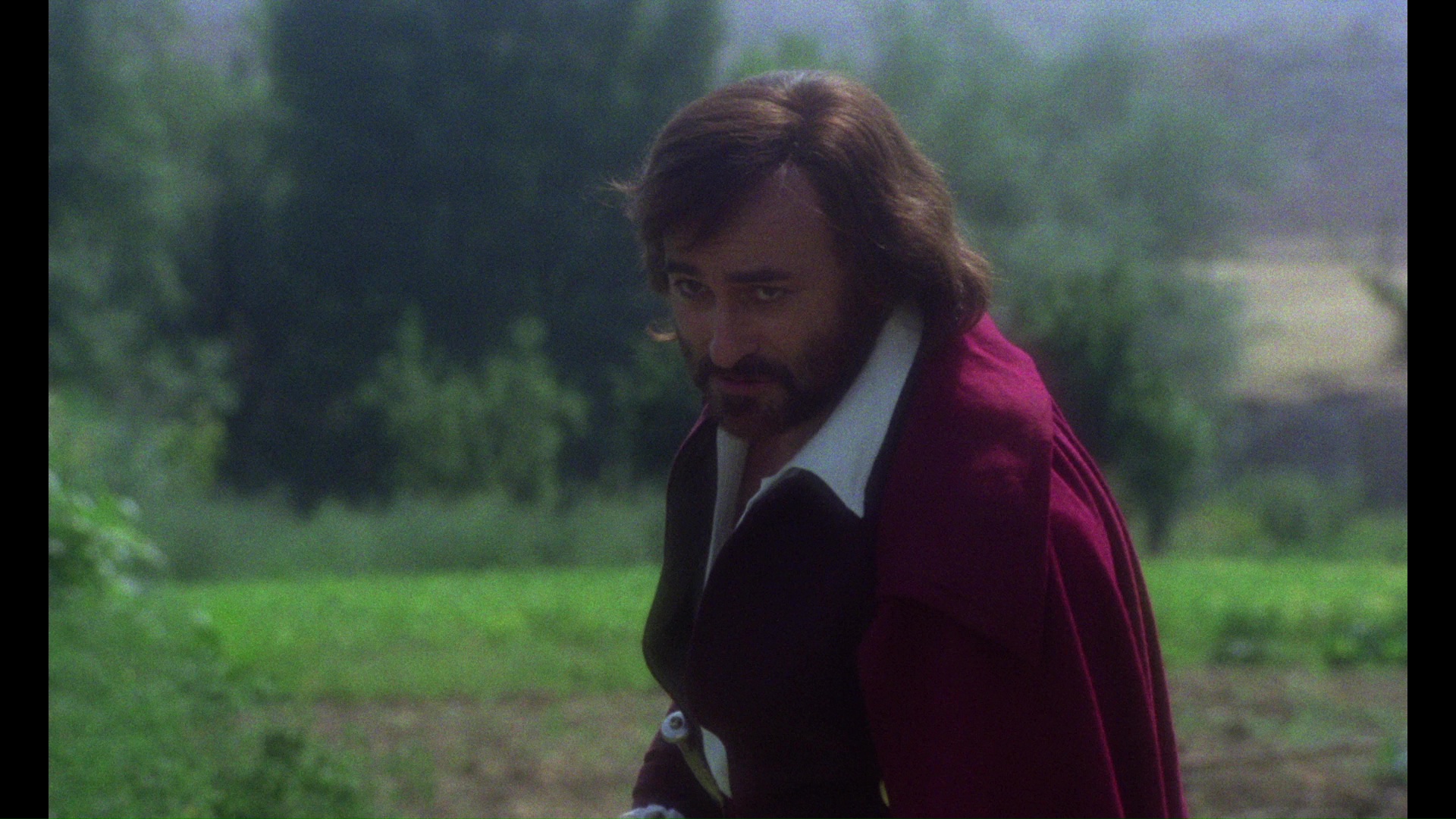 An audio commentary by Troy Howarth (author of the upcoming Human Beasts: The Films of Paul Naschy) takes a in-depth look at the film as a demonstration of Naschy's often undervalued breadth of talent in front of and behind the camera, a pessimistic reflection of his recent unpleasant experiences in the film industry, and a complex meditation on issues that aren't necessarily comfortable by today's standards. He's also full of facts about the various actors and cheerfully unabashed about his admiration for some of their physical appearances. A video intro with the late Naschy (10m30s) emphasizes his pride in the final product as a reflection of his own personal views, with the devil still turning up in guises from politicians to military leaders. Rocha appears for a warm video interview (15m14s) about his long friendship with Naschy (which began before the werewolf films), the directorial advice he received, and the personal suffering Naschy channeled into the characters in this film. Naschy's son, Sergio Molina, appears next for a video tour (9m40s) through the family scrapbooks with lots of anecdotes about his dad's heyday in Spanish cinema, which amounts to a fascinating, casual conversation with one of the people who knew him best. Finally Naschy's son Bruno Molina presents a guided tour (5m30s) through his father's office including a few art and literary surprises as well as, of course, some weightlifting trophies. 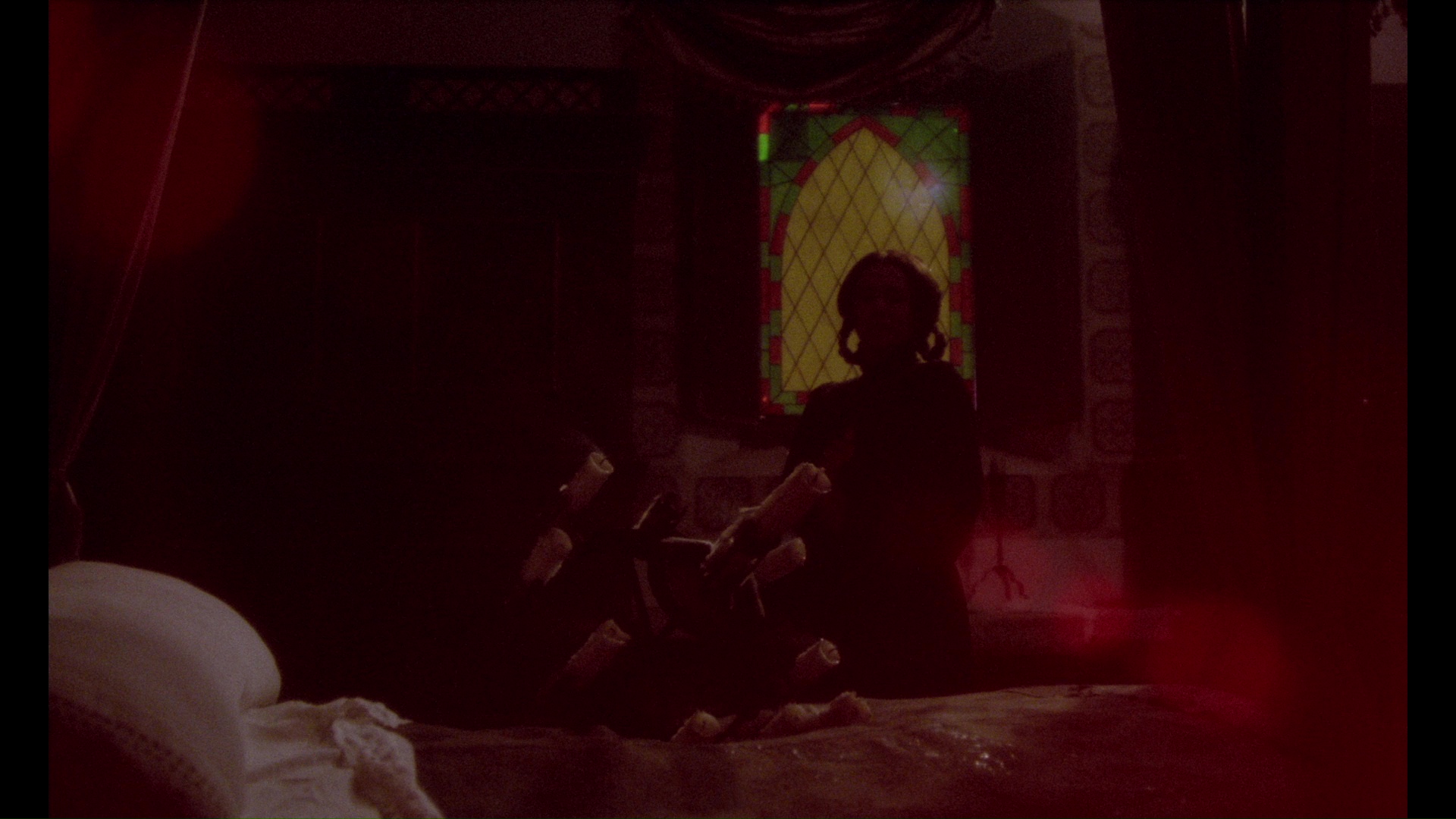 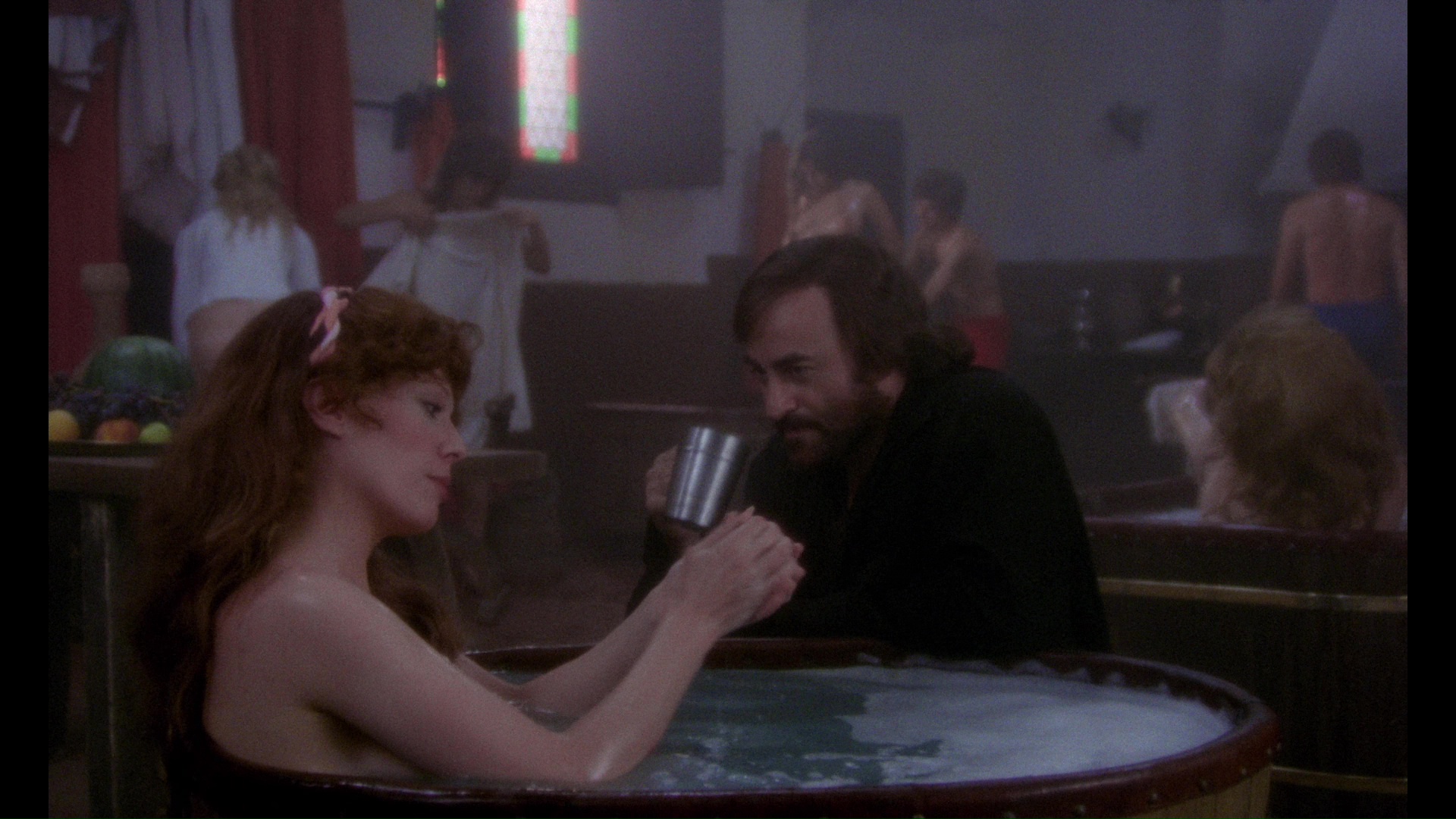 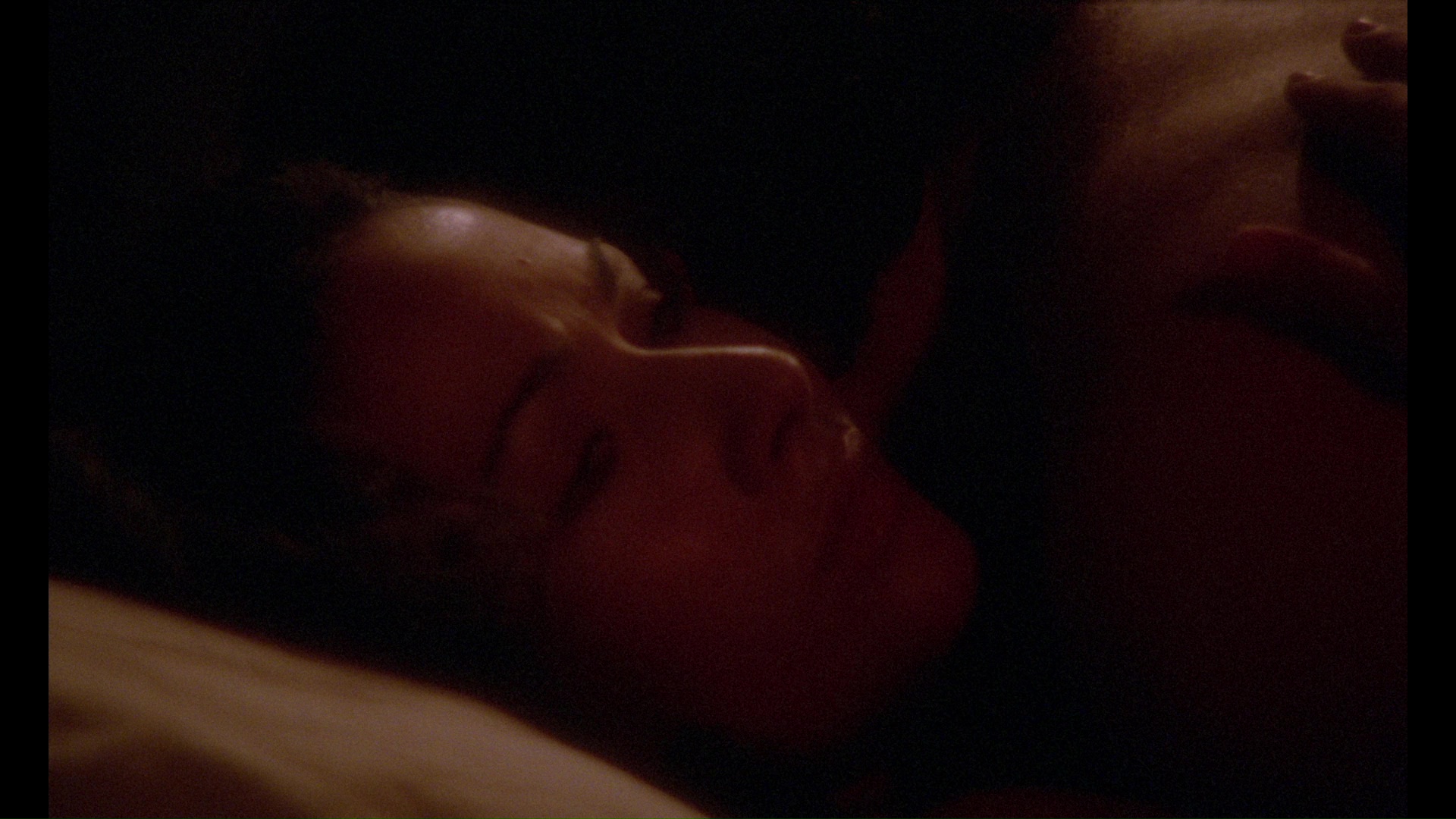 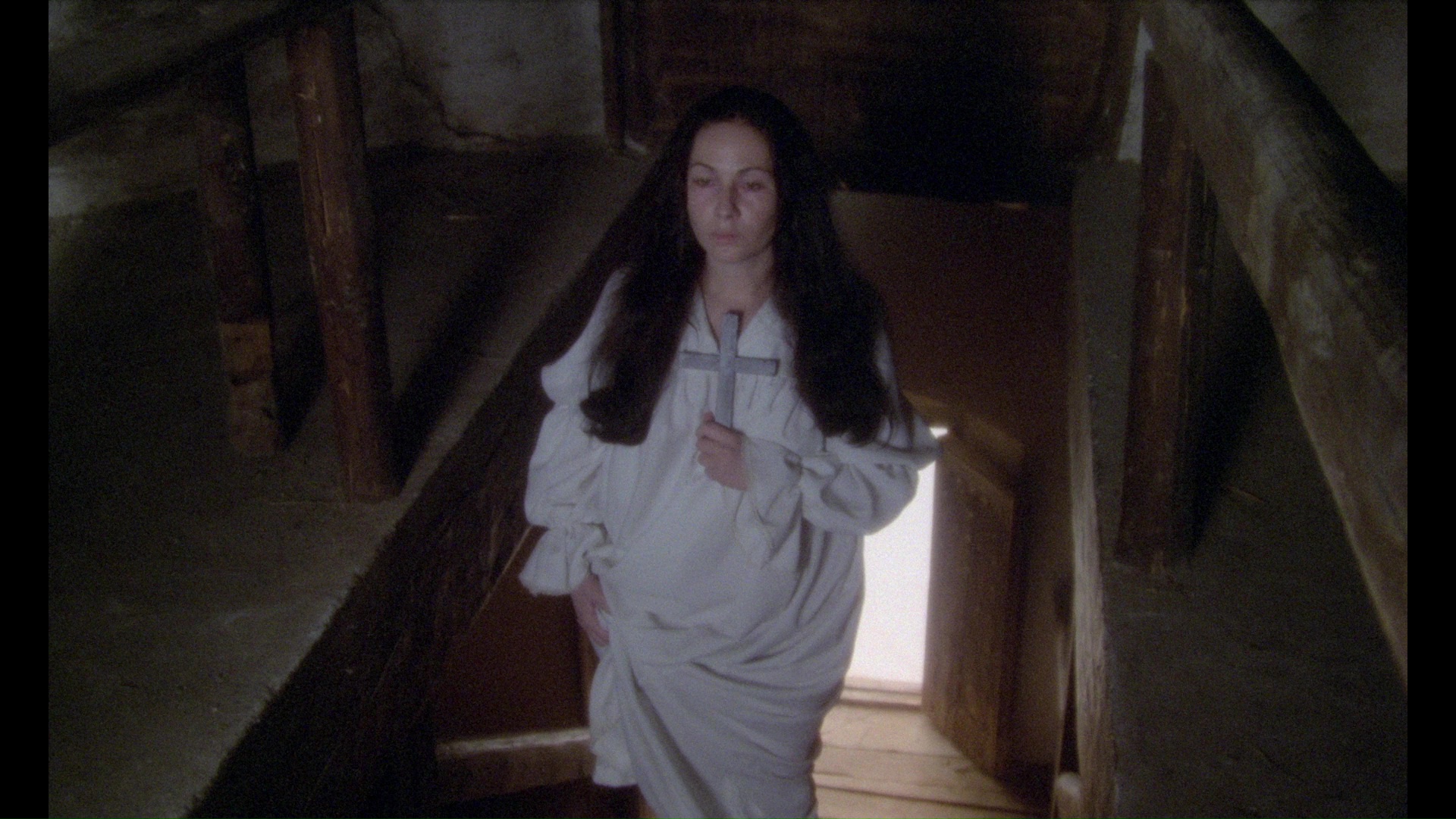 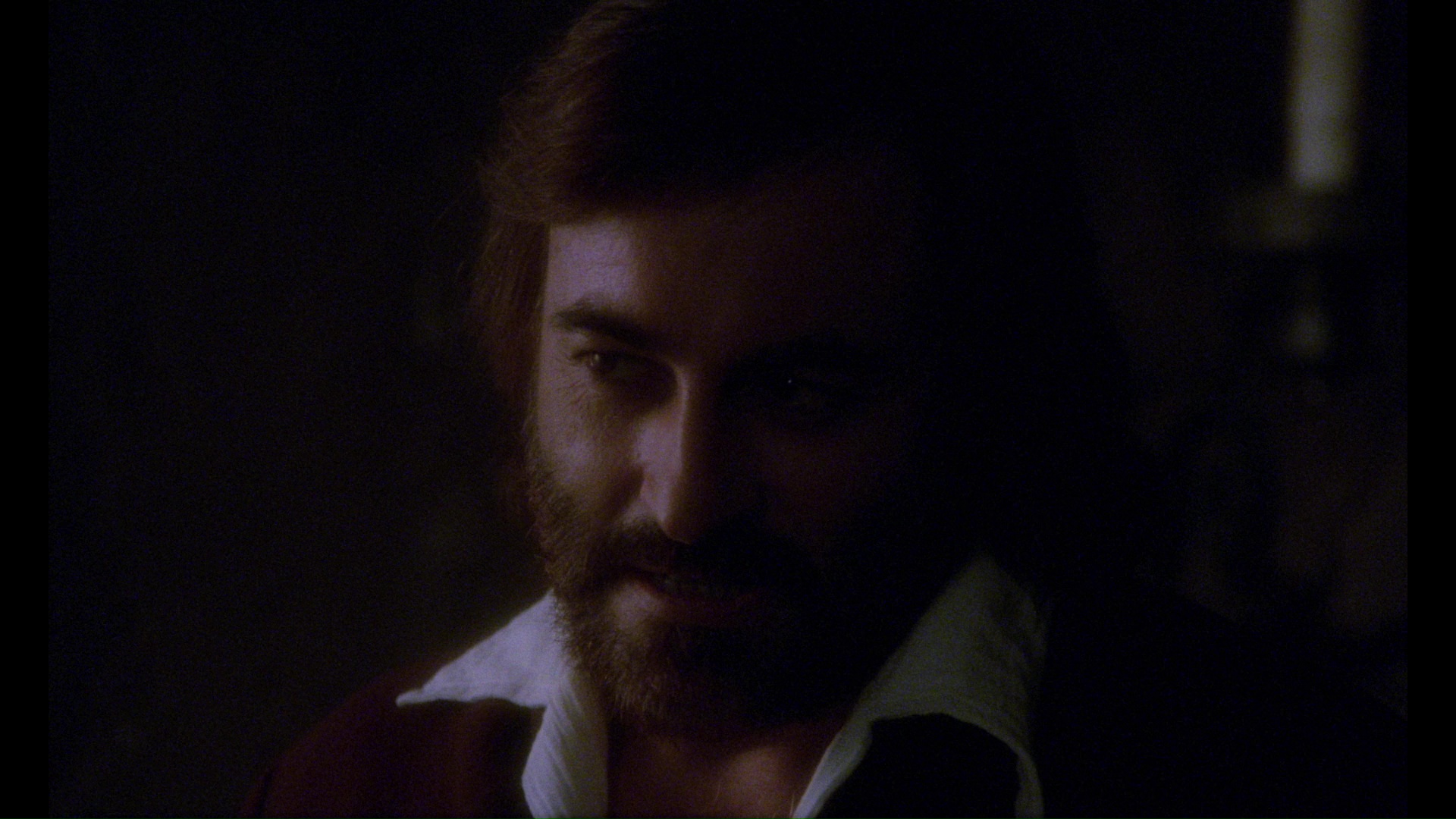