"You're so beautiful I could kill you!" "Kill me! Kill me!" Such purple prose positively percolates in this florid melodrama, a hyperventilating Douglas Sirk style yarn about a love rectangle gone horribly wrong.

Our story begins when married, middle class Sonoko Kakiuci (Woman in the Dunes' Kyôko Kishida) develops a fixation on beautiful Mitsuko (Floating Weeds' Ayako Wakao), a fellow student in her art class. Rumors erupt that the two women are involved, and soon gossip turns to fact when Sonoko frantically pushes herself onto Mitsuko - who proves to be more than willing. Sonoko is more than forthcoming with her husband, Kotaro (Blind Beast's Eiji Funakoshi), but becomes distraught upon learning that Mitsuko is engaged to the shifty Eijiro (Yusuke Kawazu). Even more strangely, Eijiro knows of the women's involvement and insists they continue their relationship through Mitsuko's marriage. A literal blood oath, double crosses, infidelities galore, and two group suicide pacts ensue before the appropriately morose conclusion.

Based upon a novel of the same name by Junichirô Tanizaki (who also wrote Kagi, the source for Tinto Brass' The Key), Manji speeds along so quickly one can only wonder how it will possibly manage to keep up its pace for a feature length running time. Somehow director Yasuzo Masumura pulls it off, from the haunting opening credits through the story itself (told in flashback by Sonoko to a police inspector - thus ensuring the proper tragic air). All of the actors operate at a fever pitch, but the gorgeous Ayako Wakao takes top honors as the central love object, a manipulative, pouting, tender, and perplexing woman whose motives may seem different from one viewer to the next. Italian director Liliana

Cavani (The Night Porter) adapted the same novel in 1985 as The Berlin Affair, transposing the tangled story to Nazi Germany with supremely eccentric results. Interestingly, Pino Donaggio's string-laden score for that version strongly recalls Manji's eerie quasi-classical chamber music, which wafts in and out of the story at just the right moments.

As with their other Masumura titles, Fantoma has done a thorough job of presenting a rarely seen gem to international audiences. The transfer appears once again to originate from a Japanese production house, as the brightness levels are a bit higher than usual and conform more closely to Japanese standards. Adjust your TV set or DVD player accordingly, but the image quality is top notch in terms of color and detail. The mono soundtrack is also stronger than usual, with even the most ear-splitting dialogue free of distortion. The disc comes with a panting theatrical trailer, the usual filmographies and promotional stills, and extremely useful liner notes by Earl Jackson, Jr. which, among many other things, explain the odd, reversed swastika symbol - "manji" - whose presence on the cover and during the main credits may cause viewers to erroneously expect some sort of oddball statement on lesbian chic fascism. 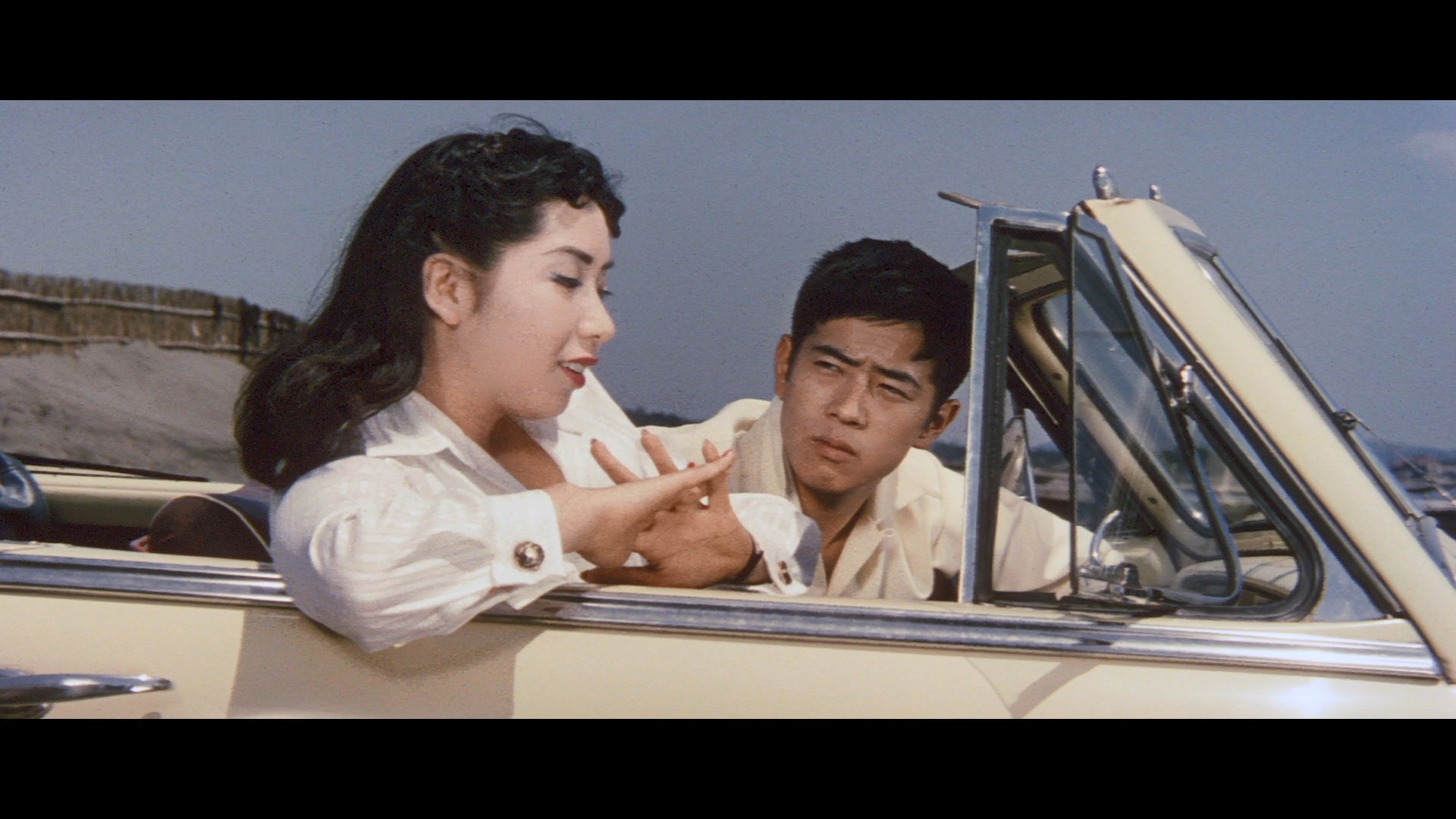 them all as caramels," remarks one executive about the crowds swarming at the bottom of his skykscraper during an early scene in the

corporate satire Giants and Toys, the third film by the delirious Yasuzo Masumura which plays like a frothy dry run for the fever pitch tone of his more mature works during the 1960s. Though the subject of competitive advertising during the international business boom of the '50s might not sound like prime material for cinematic entertainment, Masumura somehow keeps all of the story's elements bouncing in the air thanks to some kind of fiendish juggling act, resulting in a striking entertainment impossible to fully absorb in one viewing.

Distraught by the growing dominance of American candymakers in the international marketplace, three Japanese companies have stepped up their cutthroat promotional practices. At the offices of World Caramels, Nishi (Hiroshi Kawaguchi) keeps an eye on his competitors - Giant and Apollo - thanks to close friends planted inside the companies (including his girlfriend). However, the balance of World Caramels is upset by their newest spokesperson, Kyoko (Hitomi Nozoe), a dentally challenged ingenue who develops a crush on Nishi, who is less captivated by her charms than his boss, Goda (Hideo Takamatsu). Armed with plastic ray guns and a plastic astronaut helmet, Kyoko becomes a pop culture hit and proves to be more capable then Nishi could have imagined, as his entire world goes spinning out of control. 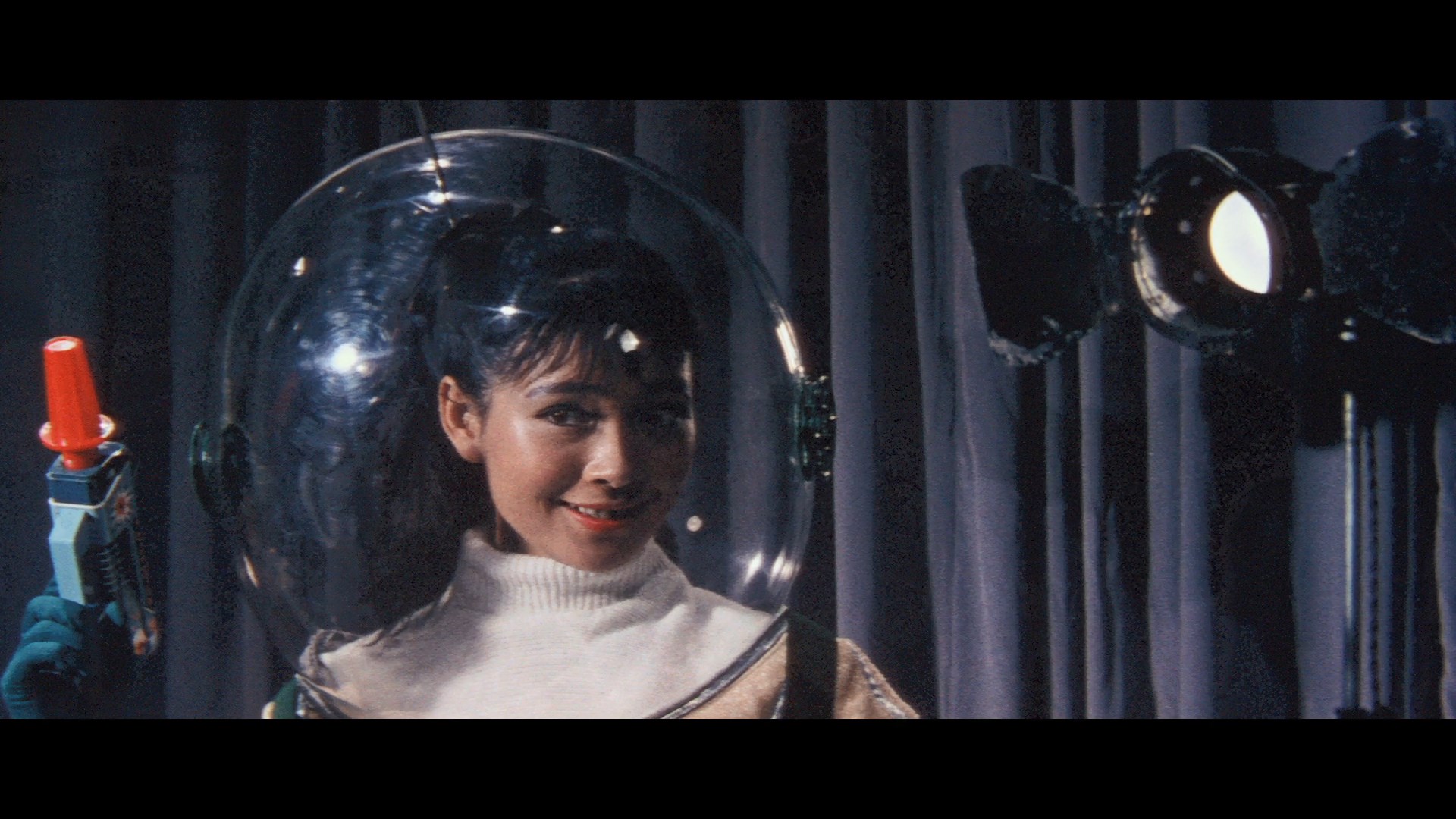 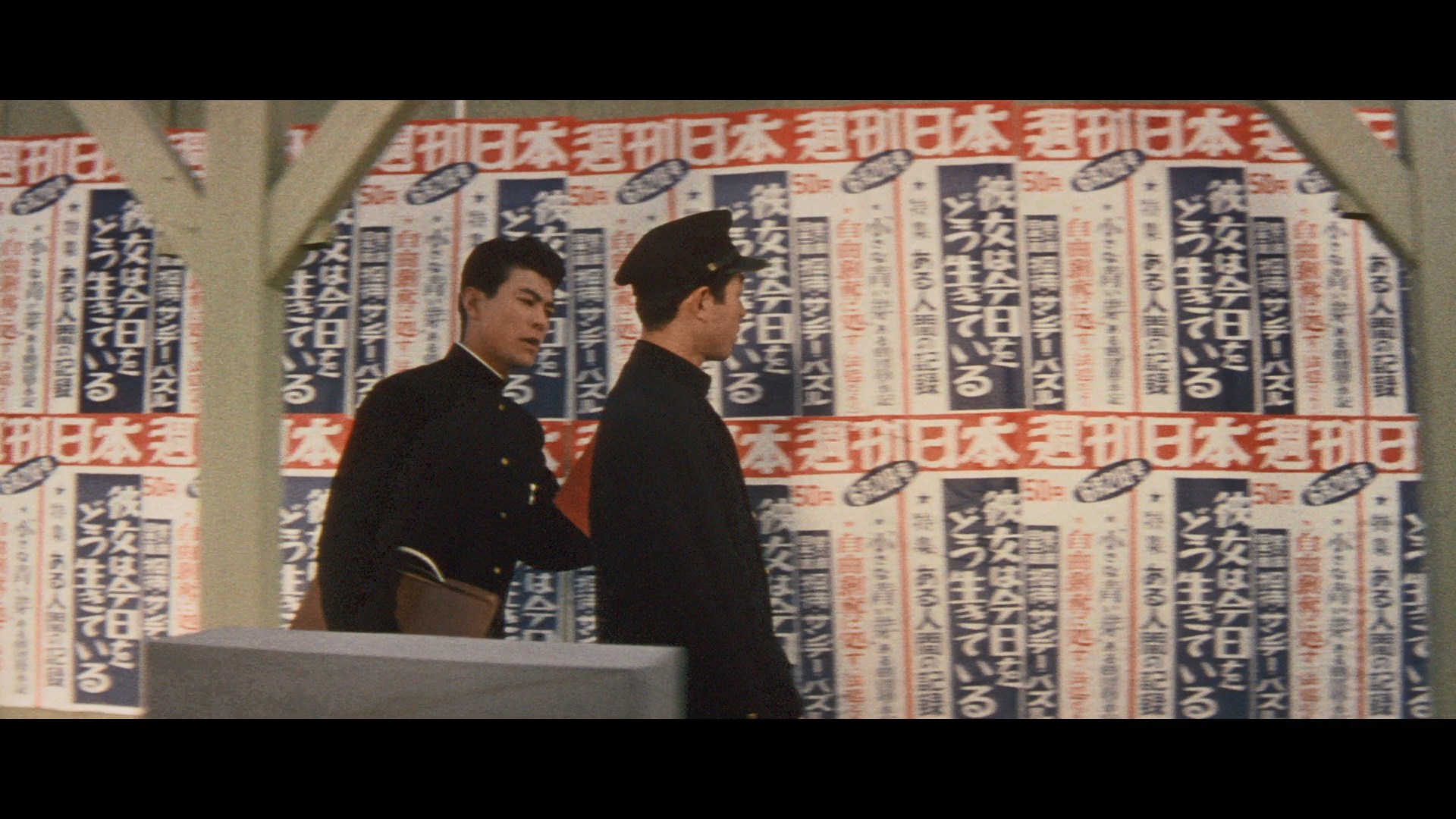 Like most Japanese filmmakers, Masumura displays an astonishing command of the scope frame quite unlike Western directors. The punchy opening credits, the head spinning montages, and the hilarious ad campaigns provide plenty of opportunities for snappy camerawork and editing, but never at the expense of the absurdist but strangely familiar characters. Though lensed in 1958, this already feels like a prime '60s Japanese title, perfectly in line with the aesthetic excess of that decade.

As with its release of Moju, Fantoma has done its part to bring Masumura's cockeyed vision to a wider audience. The anamorphic widescreen framing looks perfect, and the punchy colors look quite good and make this a gaudier viewing experience than the comparatively subdued Moju. The removeable English subtitles appear to be literate and well paced, while the mono audio sounds fine. The bouncy theatrical trailer is included along with a Masumura biography and filmography. Incidentally, the cover art on the actual box is different from the triptych design used for the disc's announcement and press material, so look carefully for this one on the shelf. 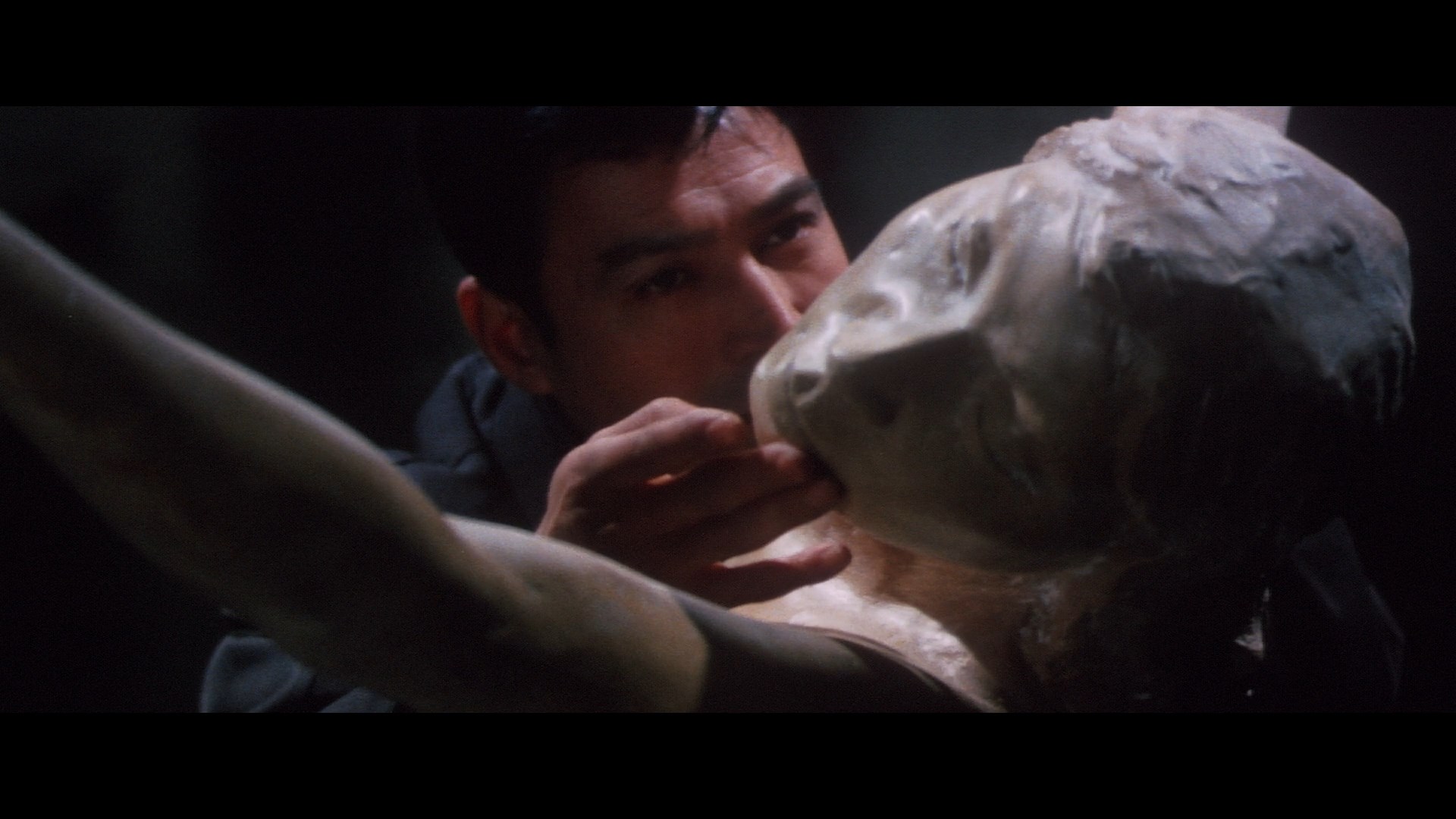 something of a hotly desired title among horror fans after a tantalizing write up in Phil Hardy's Encyclopedia of the Horror Film, followed by the appropriation of its shocking conclusion into a certain widely detested art film in the late '90s. Eventually a new, subtitled edition became available to repertory houses, followed by its quite welcome DVD release. So, how does the film stack up to its reputation?

Accompanied by the strains of mournful chamber music we meet lovely bondage model Aki (Mako Midori), who observes a blind man, Michio (Eiji Funakoshi), obsessively caressing a statue in a museum. Later he shows up as her replacement masseuse and, with the aid of his mother (Noriko Sengoku), abducts the poor girl. She awakens in a darkened warehouse, where the walls and floor are covered with 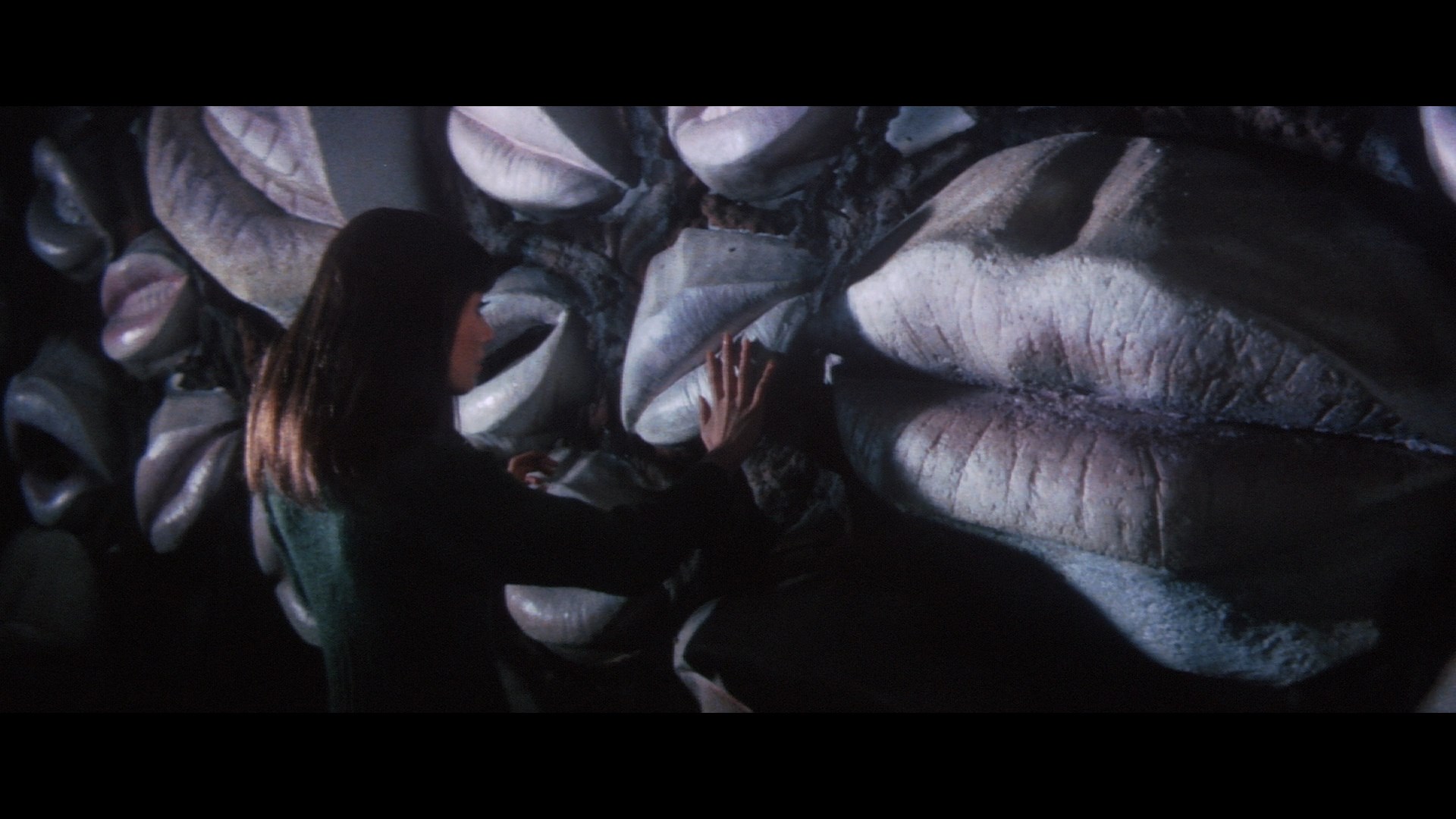 sculpted replicas of eyeballs, breasts, legs... with two giant nude figures as the centerpiece. At first Aki resists her captors, but eventually she and Michio - a sculptor determined to capture her physical and spiritual essence in his craft - commence a mutually destructive relationship based on sex, pain, and obsession, leading to an inevitable, grotesque finale.

Despite the dark and perverse nature of its subject matter, Moju contains far more psychological violence than physical. The undeniably effective ending is rendered in an unusual manner of cinematic apostrophe, while the general suffering is delivered more by the actors' primal performances than any brutality directly unleashed on their bodies. This is a long way from the gutpunch gore of earlier Japanese horror like Jigoku; instead, Blind Beast prefers to burrow into the viewer's psyche by uncovering the potential damage latent in the tension between 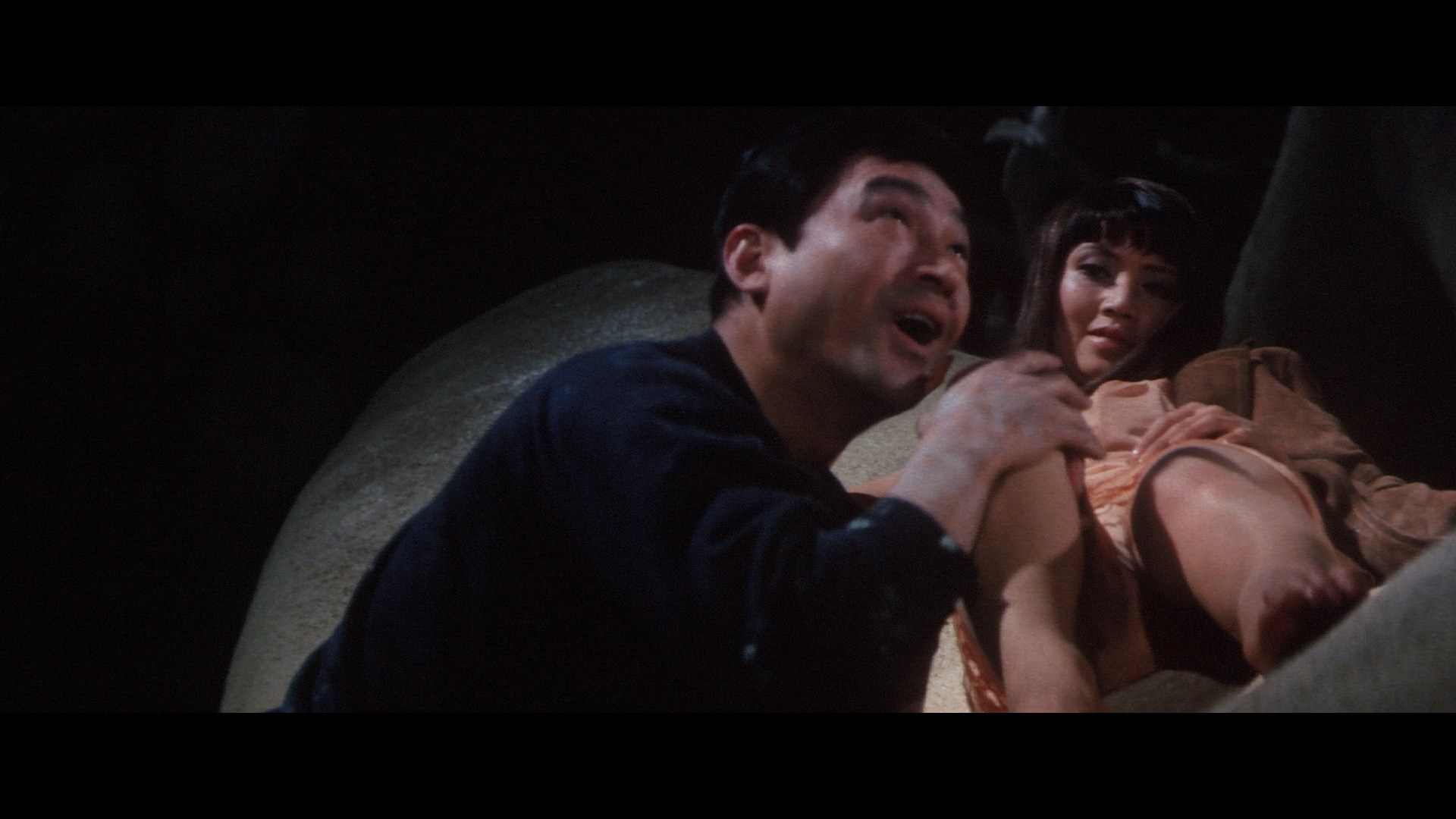 man and woman. Even the nudity, a longtime staple of "pink" cinema, is depicted in a strange, non-exploitative fashion, particularly as the narrative advances in the third act. Fortunately the experience is leavened by Masumura's astonishing visual approach, which turns each scope composition into a saturated canvas of deep shadows and rich colors. For an interesting double bill, try pairing this one up with the amazing S&M Italian captivity favorite, The Frightened Woman, which makes similar use of the same premise and giant sculpted bodies.

Though it has few home video precedents, Fantoma's Blind Beast looks about as good as possible for this film. The film elements are clean and in exceptionally good condition, and while that familiar grungy veneer of '60s Japanese cinema rears its head from time to time, colors and detail are solid where it counts. As with most other comparable titles of its vintage, the mono soundtrack is serviceable but limited; front channel amplification exhibits a little upper end harshness sometimes evident in the original recording. The original Japanese trailer (in scope) is also included.