After revolutionizing sexuality on film with saucy films like And God Created Woman, screen siren Brigitte Bardot branched out into the pop music business in the early '60s with a number of frothy, chart-friendly tunes that proved she was more than a pretty face. However, her singing career entered a whole new realm later that decade when she teamed up with genre-bending singer/songwriter Serge Gainsbourg for a slew of smash hits that allowed her to combine role-playing and sexuality in a capacity far beyond her 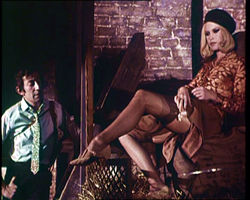 standard sex kitten image. Offering an assortment of Bardot's pop highlights, Universal's Divine B.B. compilation unites two complete television specials, a behind-the-scenes documentary, and a clutch of other notable appearances to create a solid overview of the impact Bardot had on pop culture at large.

The first portion of the disc offers four black and white numbers from early in her career: "On the Sunny Side of the Street," "Noir et blanc," "Stanislas," and "Les amis de la musique" (two never seen before, at least according to the packaging). They're all pretty standard affairs from the time, filmed with static shots on stagebound sets as Bardot happily glides around singing to the orchestra members. Jumping forward two years to 1963 (when Contempt was released), Bardot appears for an entire half-hour B&W special in which she performs in a series of numbers combining jazz, pop, mambo, and pretty much every other trendy music style of the period. For the record, the songs are "Invitango," "Tiens! C'est toi" (with Jean-Max Riviere), "Je me donne a qui me plait," "El cuchipe," "L'appareil a sous," the charming "Lecon de guitar" (with Olivier Despax), "Pas davantage," "La belle et le blues," "Faite pour dormir," and "C'est rigolo." 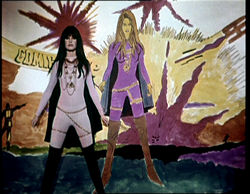 However, the best reason to grab the disc is for the complete, unedited presentation of "Bardot Special," a landmark 1967 show focused on her work with Gainsbourg. The style is similar to those wild, hyper-edited, pop art-friendly variety shows designed for Raquel Welch and Ann-Margret, and this is easily one of the best of its kind. "Marseillaise generique" kicks things off with an amazing montage of Bardot in a number of outfits (some topless but discreetly obscured) before a nice segue into her classic "Harley Davidson," which finds her stradding the title vehicle while whipping her blonde mane back and forth. The marvelous "Comic Strip" finds Bardot in a skintight superhero outfit performing with Serge, surrounded by comic strip drawings and colorful balloons as she repeatedly exclaims "Pop! Whizz!" Then she tries to switch languages with mixed results in "The Devil Is English," a creepy gothic number in which a caped Bardot wanders through London while attempting to pronounce "Carnaby Street." After that the conceptual pieces get fairly standard for a while, with songs including "Bubblegum," "Ce n'est pas vrai, " La belle vie" (with Sacha Distel), "La Madrague," "Soiree flamenco chez B.B.," and "Mister Sun." The proceedings get weird again with "La bise aux hippies," in which Bardot in bizarre hippie gear performs a trippy, acid-friendly number while Serge wanders around looking at plants in the background. "Port Grimaud," Je reviendrai toujours vers toi," "Paris," and "Un jour comme un autre" are nice, standard production numbers, but they're nothing compared to the surreal "Contact" which finds Bardot encased in glittering material with dramatic sci-fi lighting. Of course, the most famous number is easily her smash hit "Bonnie and Clyde," which she performs in period dress with Serge accompanying her as the famous robber. Fans tend to cite this number as a strong visual influence on Arthur Penn's film of the same name (indeed, Bardot and Faye Dunaway look almost identical) though the fact that both were released the same year casts some doubt on that theory. In any case, it's still one of the best video mood pieces ever made and, along with the aforementioned "Comic Strip," justifies the expense of this 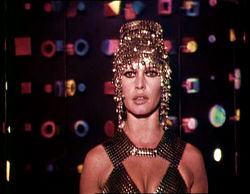 disc by itself. Finally we close out with a '20s flapper piece ("Everybody Loves My Baby") and a "Marseillaise" reprise.

Following the special is a nifty half-hour documentary, "Faces of Paris," in which we see Bardot at work on the set. Most of the running time is devoted to "Comic Strip," which took two days to film; judging by the footage on display, Bardot basically co-directed the number as well. Finally, the disc jumps forward to 1973 for Bardot's last legit pop single, "Le soleil de ma vie," performed with Sacha Distel on a French variety TV show.

Universal's DVD relies on the quality of the surviving material, which features some obvious film-related flaws. The 1967 special was shot on 16mm and edited roughly in a few spots, so the problems really couldn't be corrected without altering the entire texture of the piece. Colors look milder than they probably should, but the presentation still far outclasses any other out there. The audio can be played in two-channel stereo, Dolby Digital 5.1 (which sounds about the same), and DTS, by far the best and most robust of the bunch. The DVD indicates subtitles in French, English, German, and Spanish, but these are present only for the "Faces of Paris" special (which is mostly in English anyway). The slim DVD booklet contains liner notes by Jean-Eric Perrin. Though not as comprehensive as Universal's two-disc Serge Gainsbourg retrospective set, this is obviously a must for European pop fans and anyone with an affinity for '60s music and filmmaking trends.