About as weird as an Italian mystery can possibly get, Autopsy gained notoriety upon its original theatrical release when the U.S. distributor encouraged rumors that real autopsies were conducted and filmed during production. Of course, this is about as believable as the final "real" murder in Snuff, but the movie became a 42nd Street and drive-in favorite anyway. What viewers really got was a twisted, unconventional giallo packed with creepy set pieces and a truly novel setting.

While a stifling heat wave strikes Rome and sends many of the denizens fleeing into the countryside, a wave of suicides provoked by sunspots(!) causes more activity than usual in the local morgues. Sensitive pathologist Simona (Mimsy Farmer) is working on a thesis examining real versus staged suicides, and her work begins to get to her. Simona's disturbing hallucinations feature the fresh, mutilated corpses rising from their slabs, mugging for the camera, and even having sex on the morgue floor!

Simona's piggish boyfriend, Ed (Ray Lovelock, the memorable bearded Scot from Let Sleeping Corpses Lie), is peeved when her visions interfere with their sex life. One day a gunshot suicide victim found on the beach is wheeled in, and Simona recognizes the victim as a beautiful woman she had seen earlier. The brother of the deceased, a slightly sinister priest (Barry Primus), believes the woman's death was actually murder, and Simona's research indicates he may be correct.

The second trip into the macabre from director Crispino (The Etruscan Kills Again), this film was originally released as Macchie Solari and, according to the apparently erroneous press materials, was listed with an inflated running time of 125 minutes! Joseph Brenner picked the film up for the U.S. and re-edited the opening sequence to omit the opening titles, instead cutting new credits with an unforgettable funky beat into the harrowing suicide 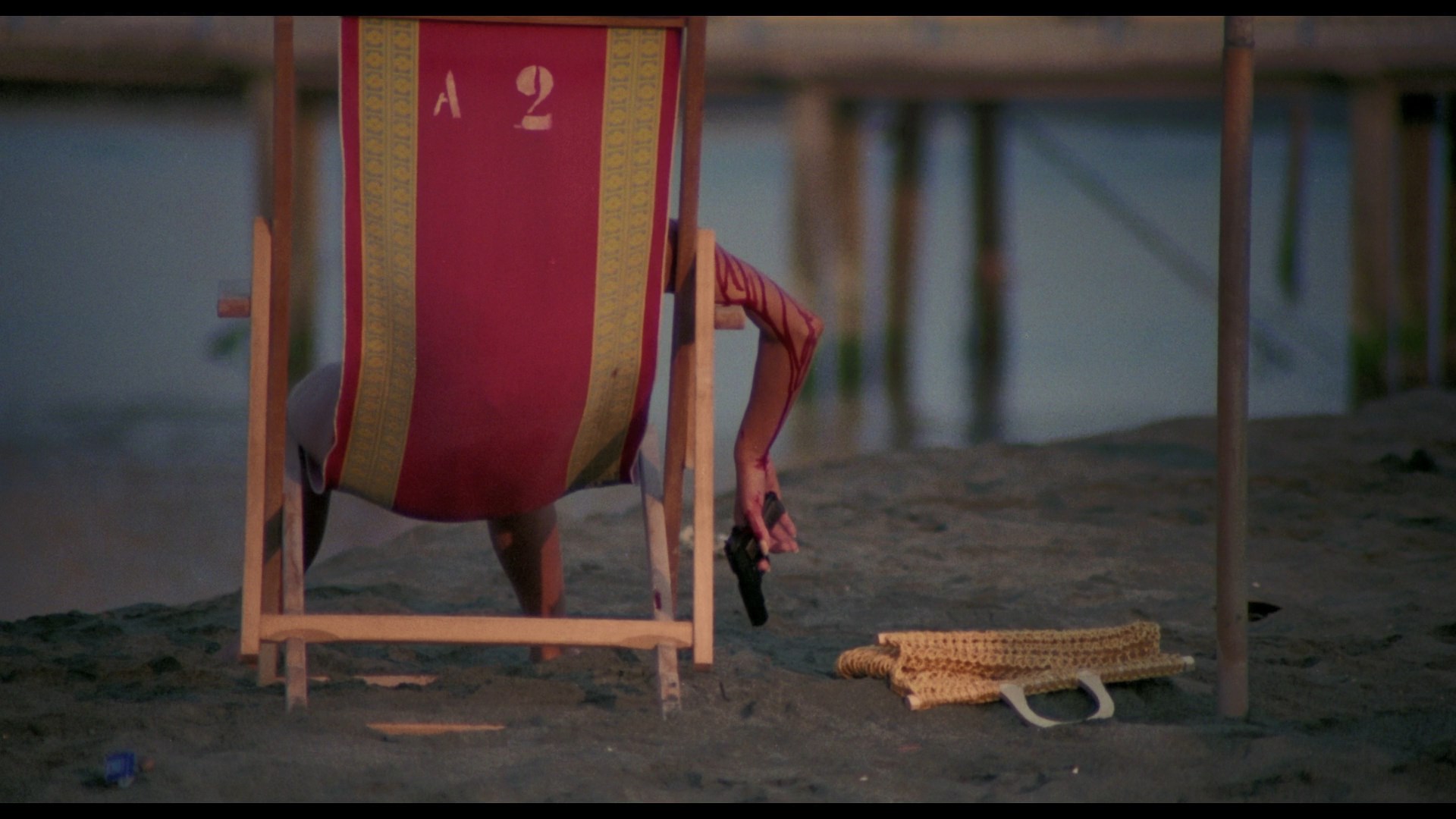 montage which kicks off the film. A few dialogue trims were made, and the entire end credits wound up on the floor as well. The result was not a substantially different film, and all of its strengths remained intact. Farmer's jittery, shrill performance was apparently intended, while one can only wonder what she sees in the shifty Primus, one of the screen's most unlikely men of the cloth. Lovelock easily takes the acting honors, as usual, with his misogynist pig getting all of the most memorable lines. The film is astoundingly graphic at times, particularly during some very revelaing sex scenes and a chilling, suspenseful peek inside a crime museum that isn't easily forgotten. Some of the film rambles on a little more slowly than it should, but that's '70s Italian mysteries for ya. Ennio Morricone also contributes a lovely, haunting main theme, which was stupidly left off the soundtrack album and most memorably accompanies the film's final poetic scene.

By far the most impressive release of this film in any edition, Anchor Bay's DVD of Autopsy is completely uncut and looks fantastic. The weird, often subdued color schemes don't offer many opportunities for an eye-popping video transfer, but the materials used are absolutely pristine and vividly realized. An uncut letterboxed edition was previously available on Japanese VHS, but that version was marred by optical censoring of all frontal nudity (which is a lot in this film). However, the Japanese version also contained an effective two channel stereo soundtrack, while the Anchor Bay disc is mono; the loss isn't tremendous, but it's odd they didn't include that version as an option. The disc also includes an alternate Italian language track-- pretty much useless without any subtitles-- as well as the U.S. trailer (which blows the entire ending) and a European trailer as The Victim.