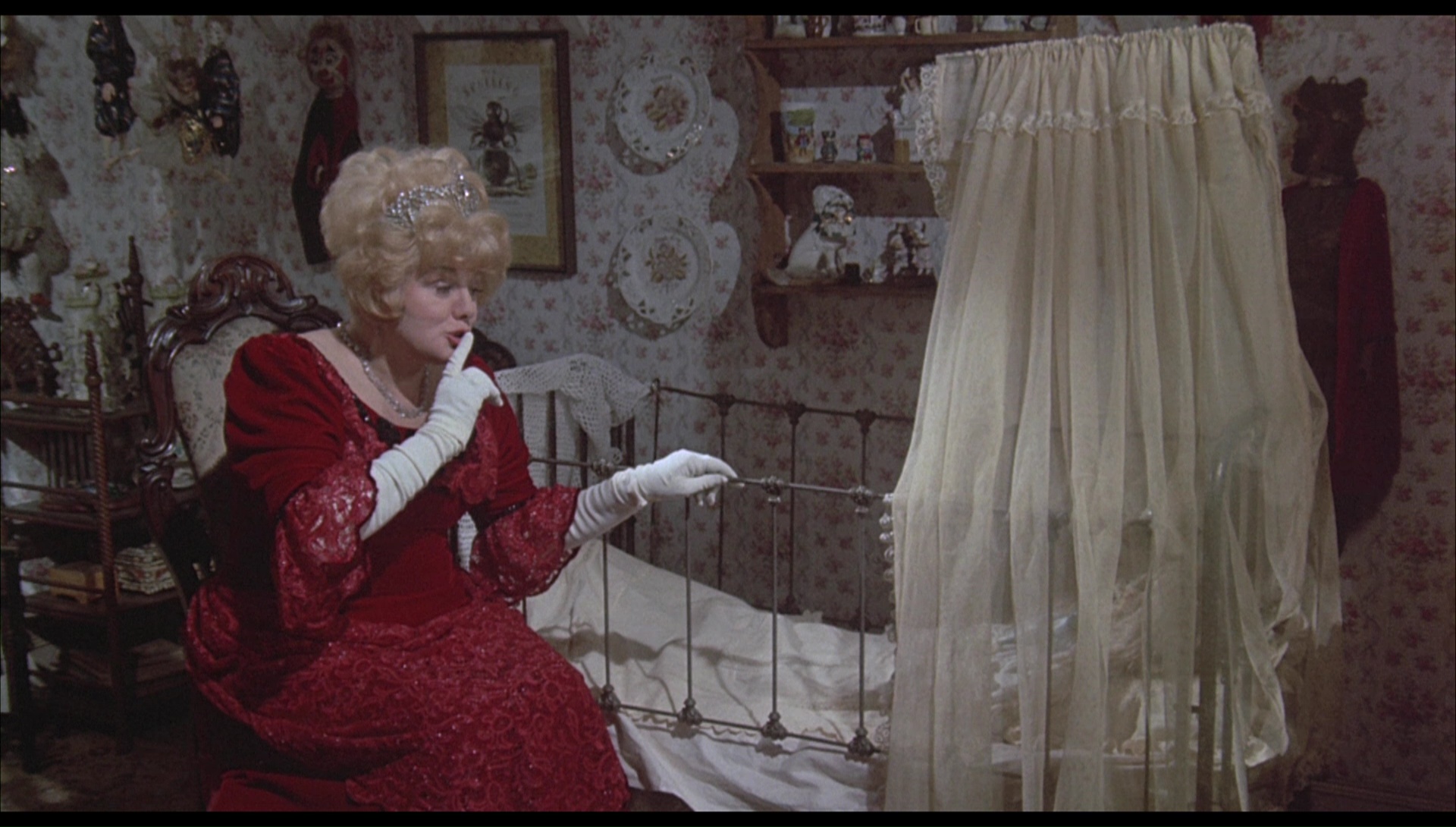 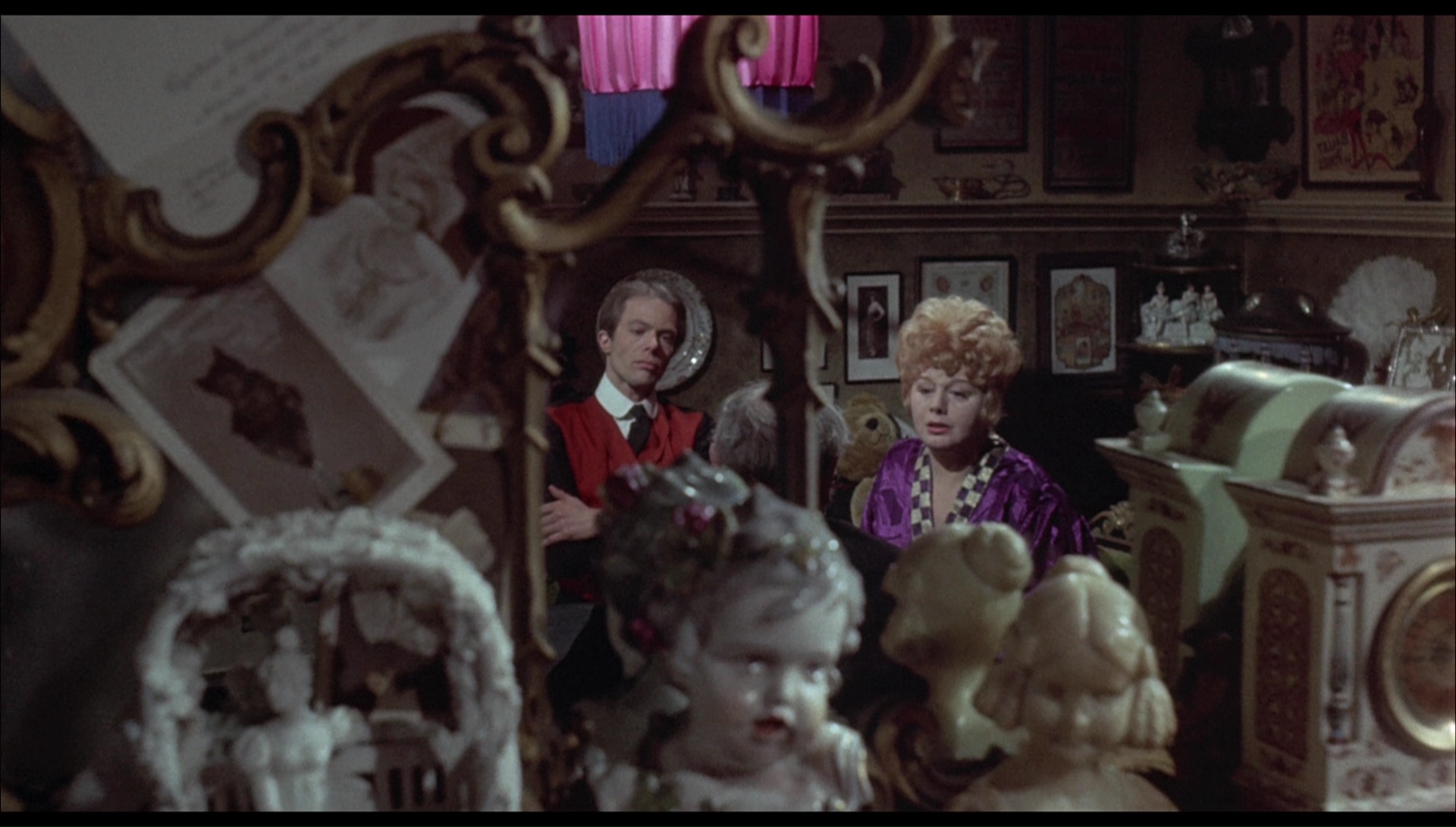 The "horror hag" trend of giving older Hollywood actresses juicy roles in horror movies had been going strong for a decade when Shelley Winters starred in her third contribution to the cycle, Whoever Slew Auntie Roo? Audiences originally saw this one under the shortened title of Who Slew Auntie Roo?, a renaming by American International Pictures opposed by the director, Curtis Harrington, a veteran of many experimental films as well as Night Tide and Queen of Blood. A reliable AIP star thanks to Bloody Mama and Wild in the Streets, Winters was no stranger to the female-oriented horror formula thanks to recent turns in What's the Matter with Helen? (also directed by Harrington) and the flawed but fascinating The Mad Room, so it made sense to cast her in the leading role here, which was originally intended for Bette Davis.

We first meet our title character, Rosie (Winters, and yes, she gets slain) aka "Auntie Roo," dressed up in fancy garb next to a crib in a bedroom. The young girl she's attending turns out to be a rotting corpse, which tips us off right away that she's far from mentally unstable. However, the rest of the 1920s English town in which she lives fails to recognize her incipient madness and allows her to throw elaborate Christmas parties for the local children, where she spies orphaned siblings Christopher (Oliver!'s Lester) and Katy (Franks, an Amicus vet from Tales from the Crypt and The House that Dripped Blood). Katy's resemblance to Roo's dead daughter, Katharine, inspires the unstable Roo to keep the girl 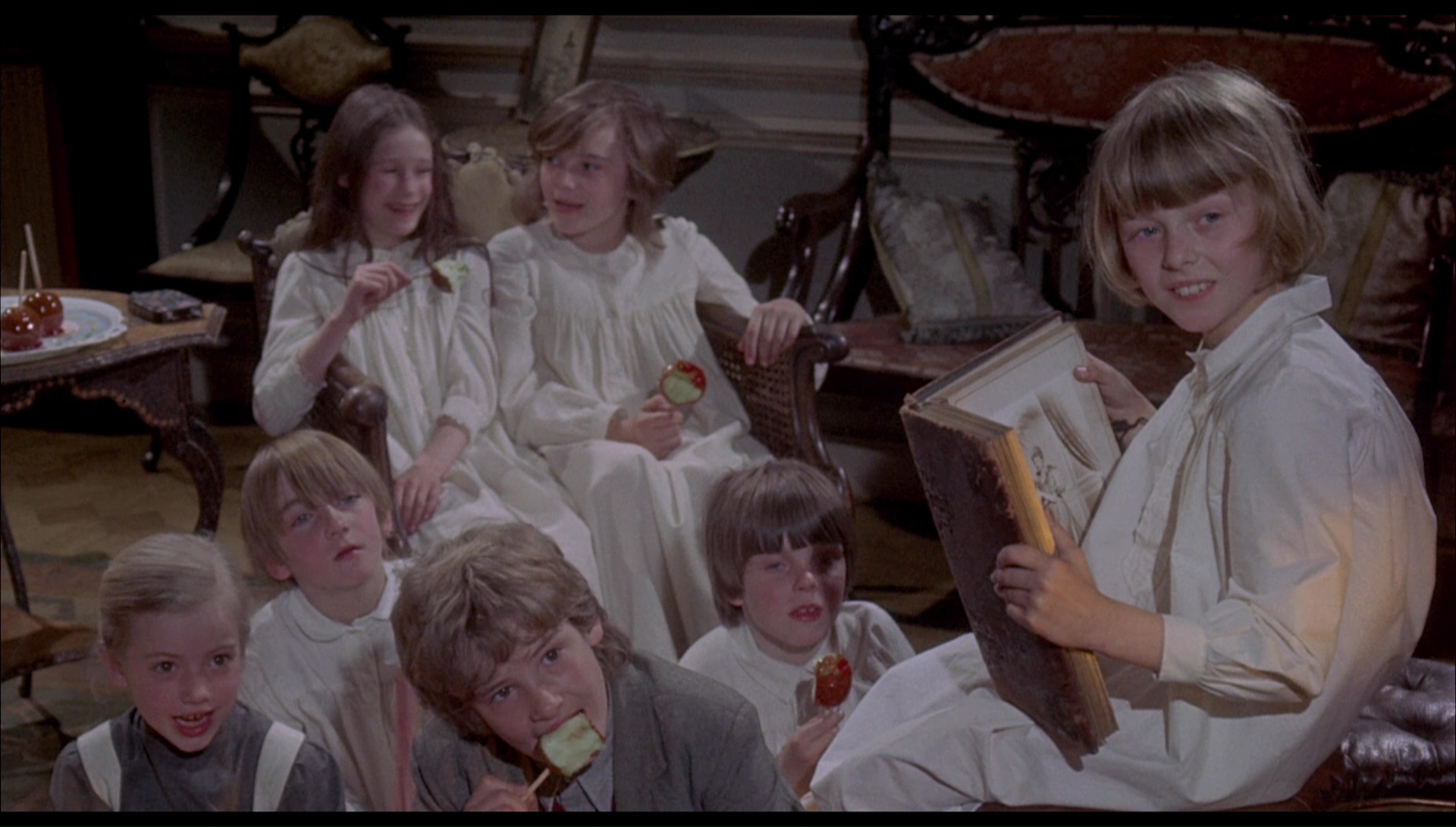 locked in the nursery and largely ignore Christopher, who becomes convinced that Roo is a modern-day witch straight out of "Hansel and Gretel." Meanwhile the woman's sanity keeps sliding downhill, with the children forced into increasingly perilous circumstances. 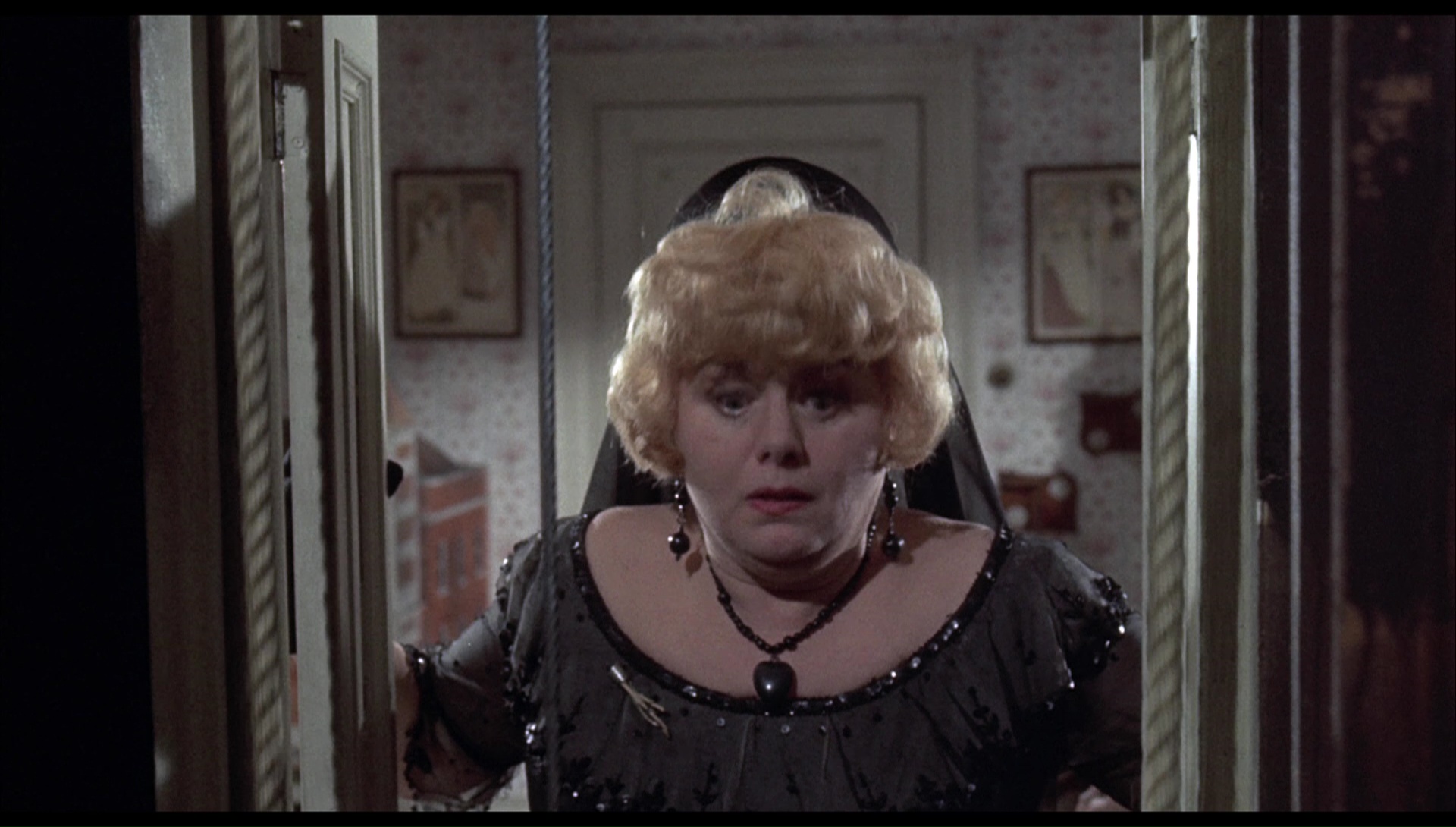 One of the earlier attempts to modernize a fairy tale for horror audiences, this film is another example of a Harrington film that's high on concept and period visual flourishes (not to mention intentional camp) but low on narrative efficiency. Winters gives it her all, but the overloaded cast of characters doesn't really gel; the great Ralph Richardson has a glorified cameo as a phony spiritualist and Lionel Jeffries and Hugh Griffith get a couple of throwaway scenes, while a young Michael Gothard (The Devils, Scream and Scream Again) has a dead end role as a duplicitous butler. The kids are also probably more unsympathetic than originally intended thanks to the performances of Lester (who was still kind of a big thing at the time) and Franks, who come off as wildly unhinged and future serial killers rather than endangered tykes. The film is more on Roo's side for much of the running time anyway, and Winters' sympathetic, riveting performance goes a long way to keep you rooting for her even when she's running around in a veil with a cleaver!

AIP was still on something of a British kick when it made this film in Norfolk and at Shepperton Studios, 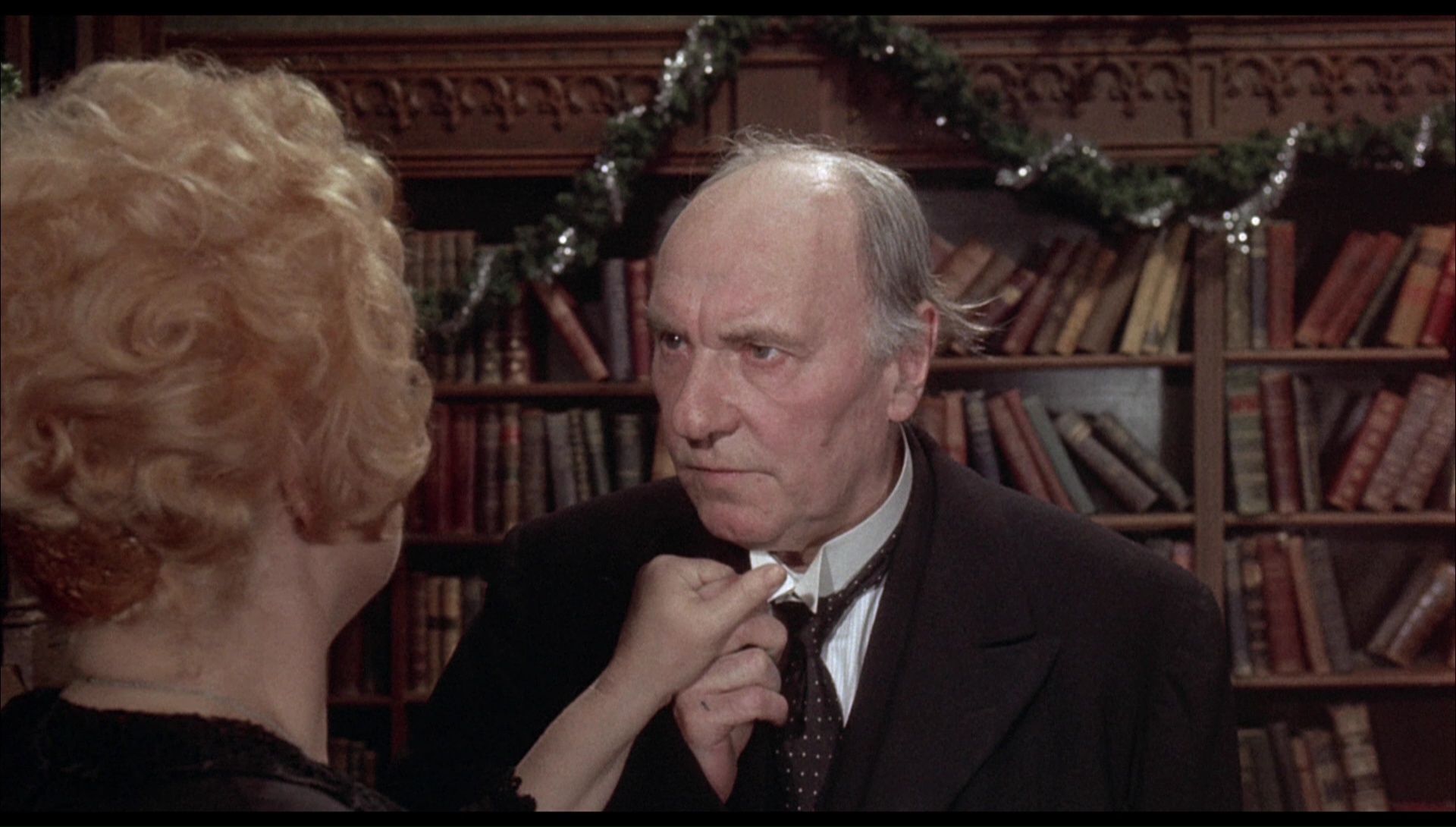 even bringing back British composer Kenneth V. Jones for another subdued but effective score after his work on their UK-lensed Tomb of Ligeia. Harrington makes the most of the more economic but lavish assets at his disposal, with quaint decor and vintage clothing giving the film a lot of extra class and production value from start to finish. It's more cozy and weird than terrifying, but that should 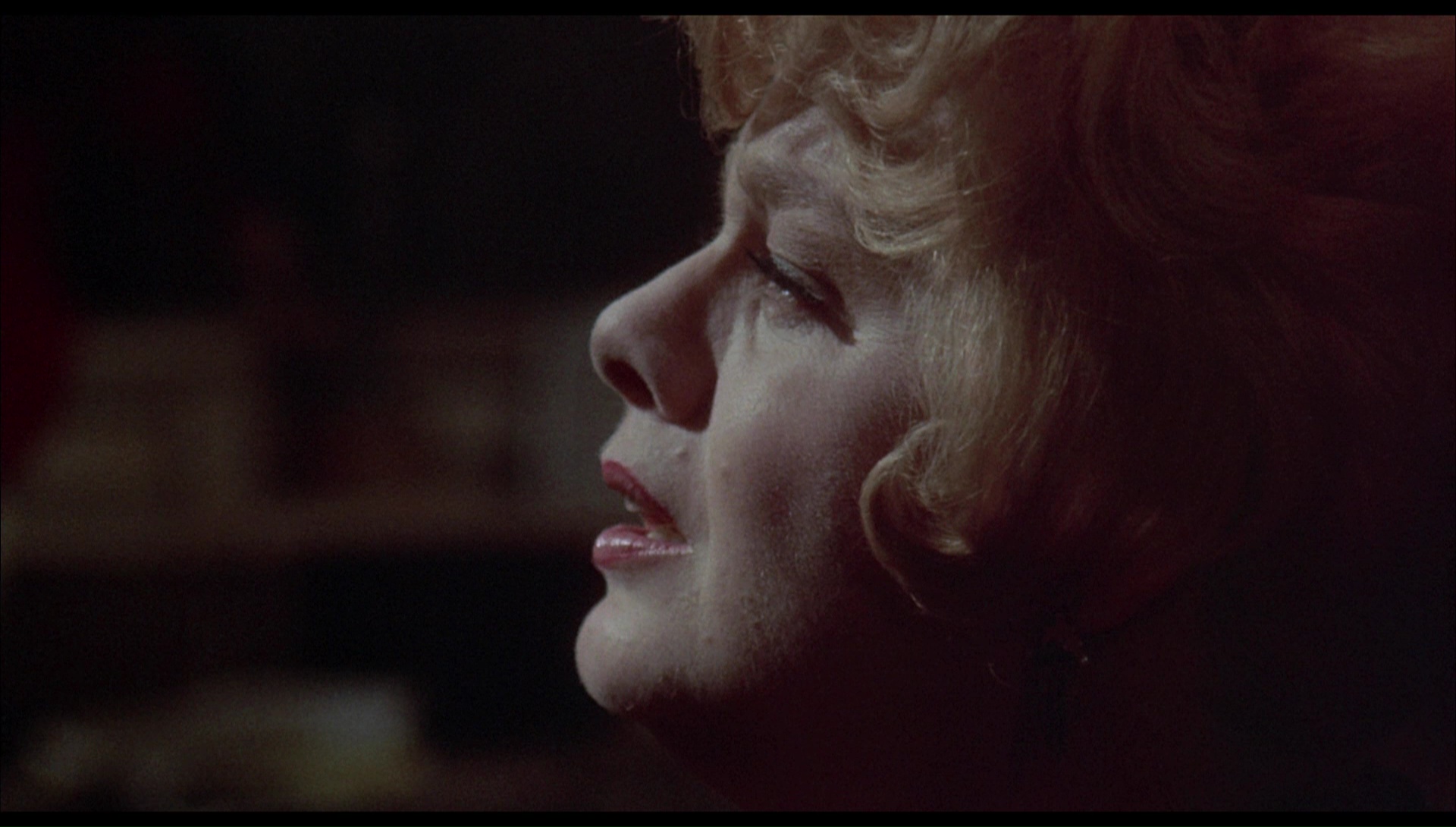 be the right combination if you're in the correct frame of mind. The film earned an early GP rating from the MPAA in 1972, before the designation was turned into the somewhat softer PG; for its DVD release in 2006 (paired up with What's the Matter with Helen?), it was shifted over to a PG-13 (which still seems a little harsh). The transfer was solid at the time and a step up from the Vestron tape that proved to be somewhat elusive for many fans back in the '80s. However, you'll definitely be best served by the 2016 reissue from Kino Lorber as either a Blu-ray or standalone DVD, both sporting a fresh HD scan that's up there with some of the strongest AIP '70s transfers. Depth, color, and detail all improve significantly, with every strand in Winters' wig and sparkle in her clothing now popping out clearer than ever. The DTS-HD MA 2.0 mono soundtrack sounds very strong as well. The major extra here is a new audio commentary with David Del Valle and Nathaniel Bell, which mainly focuses on Harrington and Winters and their roles in the film's place in AIP history with Harrington intended to do their version of Wuthering Heights before swapping out here for Robert Fuest. They also go into the film's Dickensian and Christmas elements as well as the imposition of Gothard on Harrington, who wanted Oliver Tobias instead, as well as the director's much-noted infatuation with the films of Josef von Sternberg. The theatrical trailer is included along with bonus ones for Madhouse, Deranged, Jennifer, and The Crimson Cult.