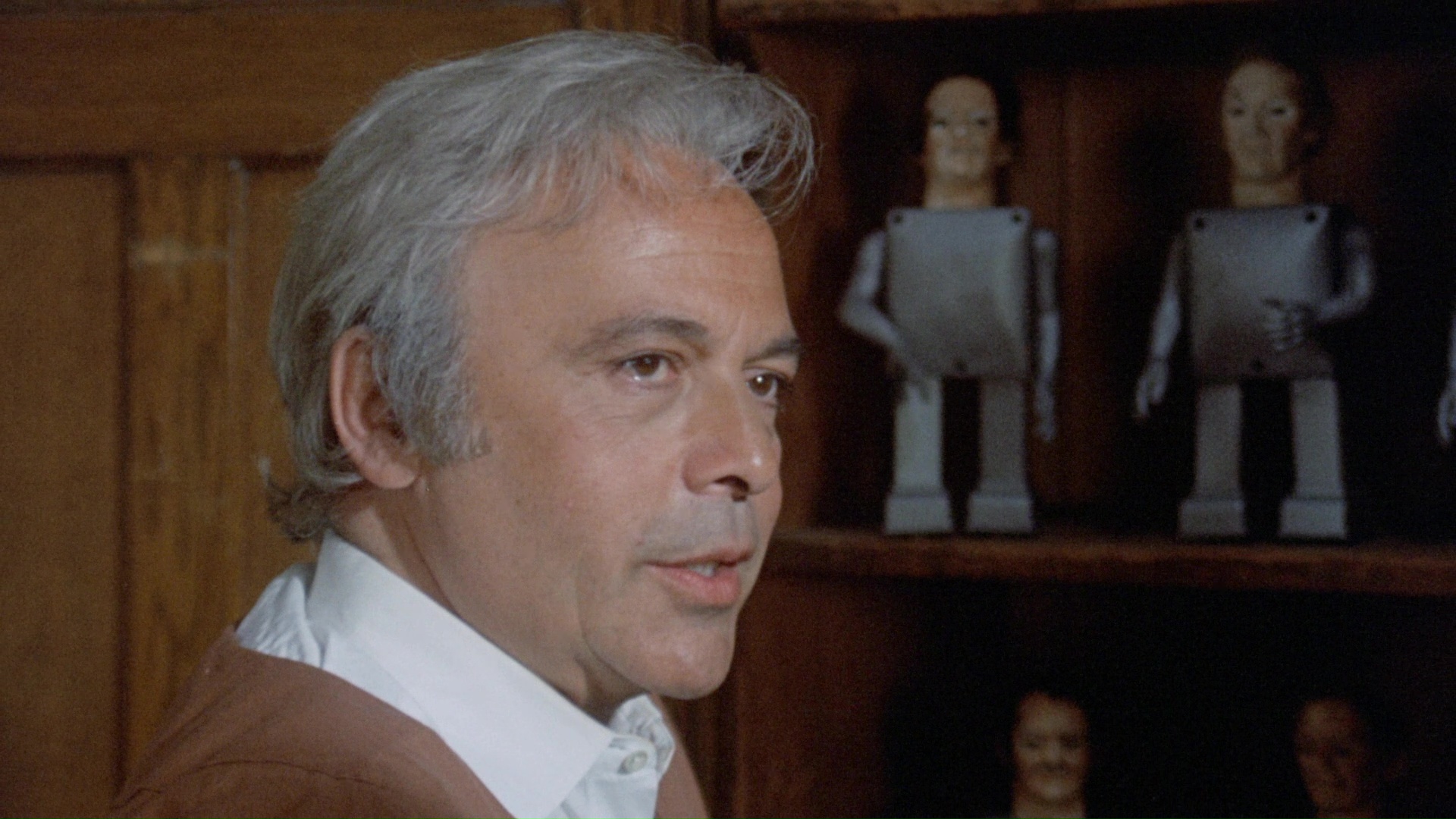 the heyday of British 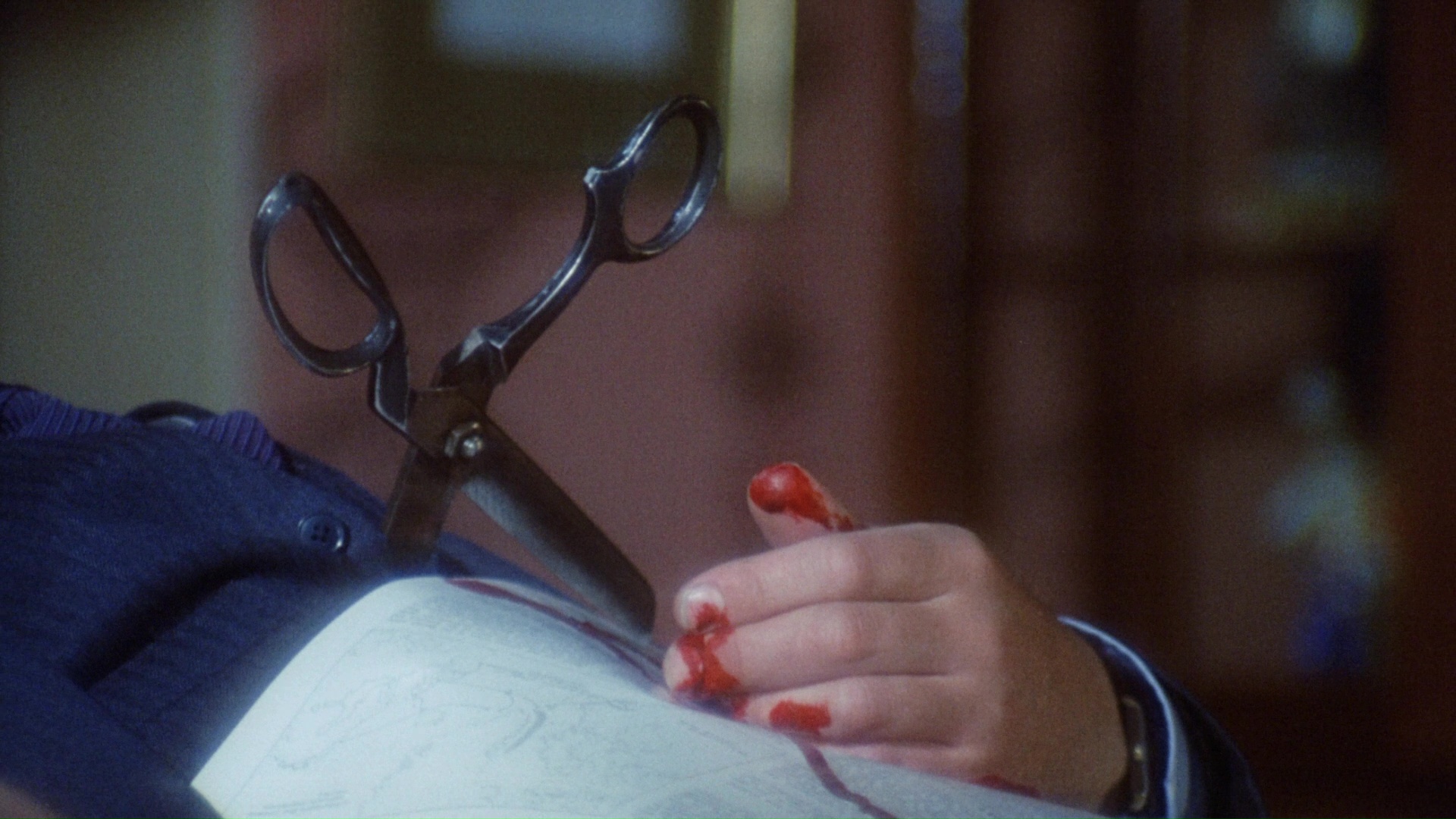 horror films in the '60s and '70s, a number of studios attempted to compete with Hammer for the international terror market. The best of these, Amicus, specialized in anthology films, with chilling stories linked together by a clever framing device. Tucked among such other '70s gems as their blood-freezing version of Tales from the Crypt, Vault of Horror, and From Beyond the Grave is this ingenious compendium of tales by Robert Bloch (Psycho) boosted by an astonishing international cast.

The presumptuous young Dr. Martin (Mahler's Powell) arrives at a sprawling mental institution in the English countryside to apply for a position as head of the facility. The orderly informs him that the previous director, Dr. Starr, went completely mad and now resides within the asylum walls. In order to win the job, Dr. Martin must guess which of the inmates is actually the former Dr. Starr by listening to the case histories directly from the patients themselves. In the first, a young woman named Bonnie (The Mephisto Waltz's Parkins) relates how her married lover (Todd) chopped up his wife and stored her carefully wrapped body parts in his basement freezer. Unfortunately, revenge has a nasty habit of striking from beyond the grave. Next, a kindly tailor named Bruno (Morse) is hired by an eccentric customer (Cushing) to design a most unusual, occult suit for his son. Then the beautiful Barbara (Rampling) explains how her return home 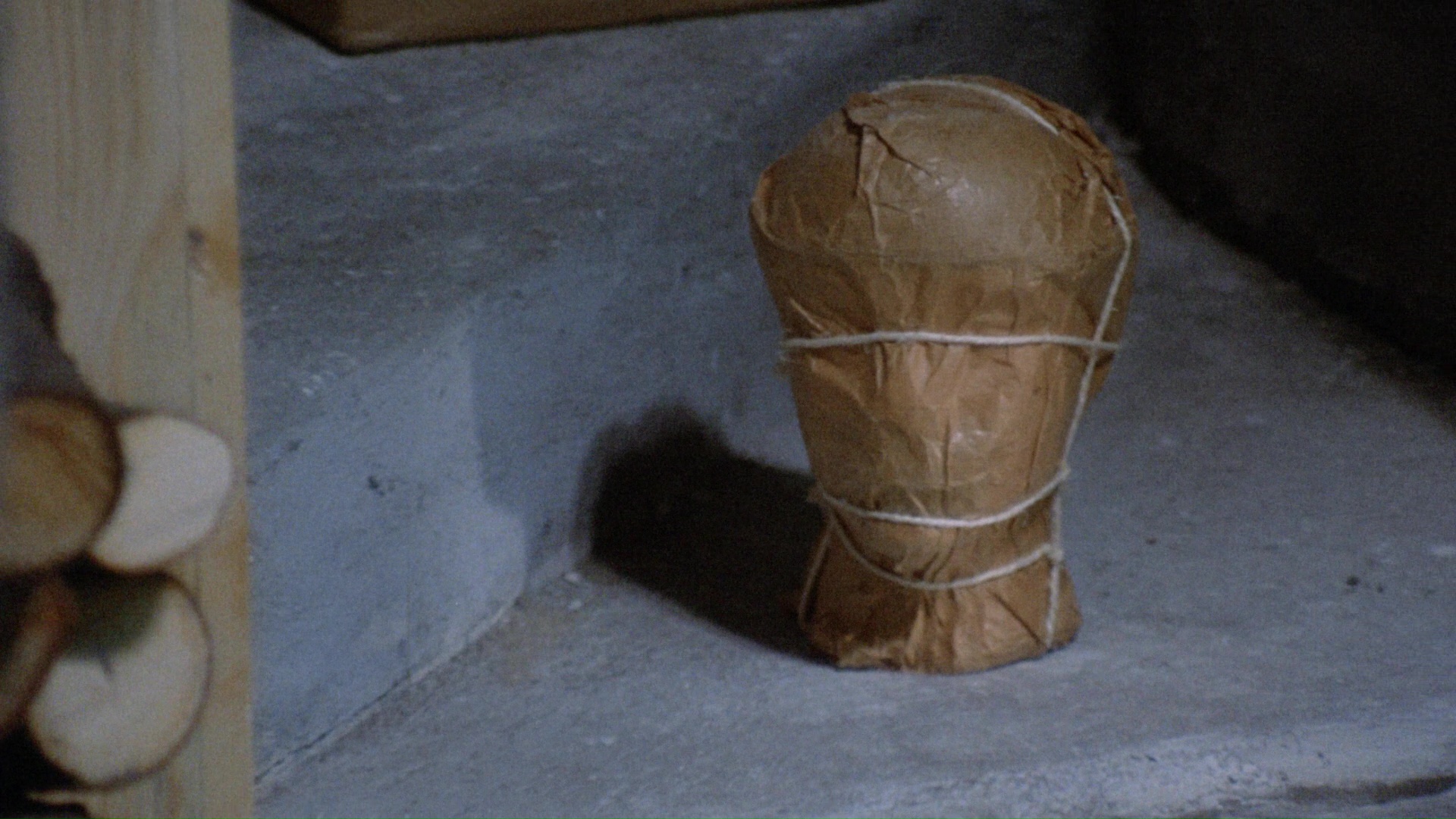 after a period of mental treatment was upset by the arrival of Lucy (Ekland), 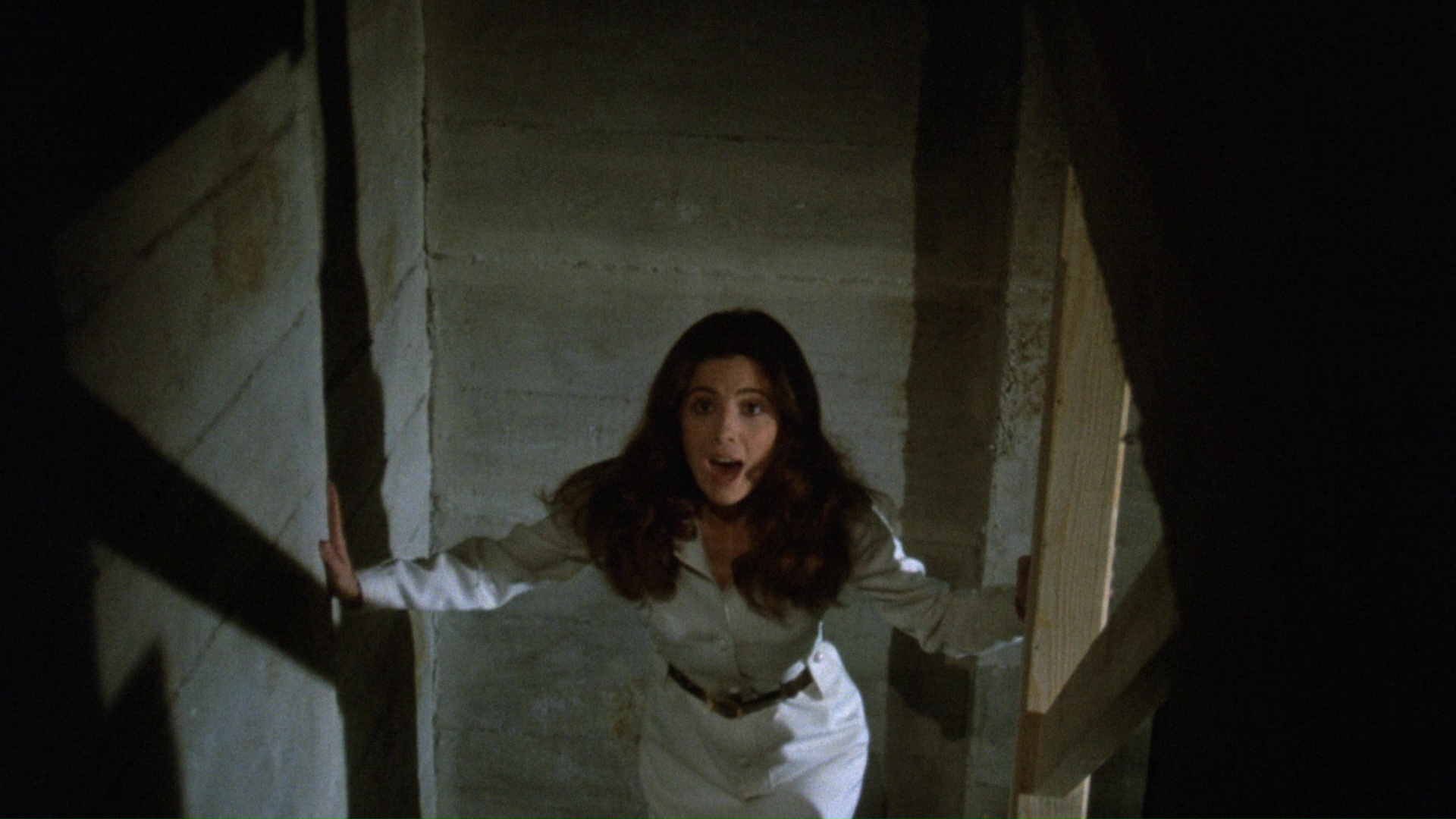 an impish prankster who ultimately turns to murder. Finally, the gruff Byron (Lom) shows off a series of miniature, anatomically correct robot-dolls which follow the bidding of their creator's will. So does Dr. Martin guess correctly? Watch the film and find out...

Thanks to its fast pacing, clever use of classical music, nasty black humor, and assured direction by Roy Ward Baker (Quatermass and the Pit), this film (which was reissued as House of Crazies in the United States) consists of many high points, with even the most predictable moments still pulled off with admirable panache. The third episode is the comparative weak point as its Blochian twist will be painfully obvious right from the beginning, but it's still enjoyable to watch the contrasting acting styles of Rampling and Ekland mixing together. The second tale, "The Weird Tailor," had previously been filmed as an episode of the classic horror series Thriller, but this remake doesn't suffer in comparison apart from a significantly less frightening ending. Powell does well with a difficult role, while Lom steals every moment near the end of the film. The final twist is a delicious surprise and will not be discussed any further here.

A longtime staple of public domain video lines, Asylum received its first video treatment on DVD from Image in 2000 using an old transfer from the Prism Video days, complete with an awkward, computer-generated title card to remove 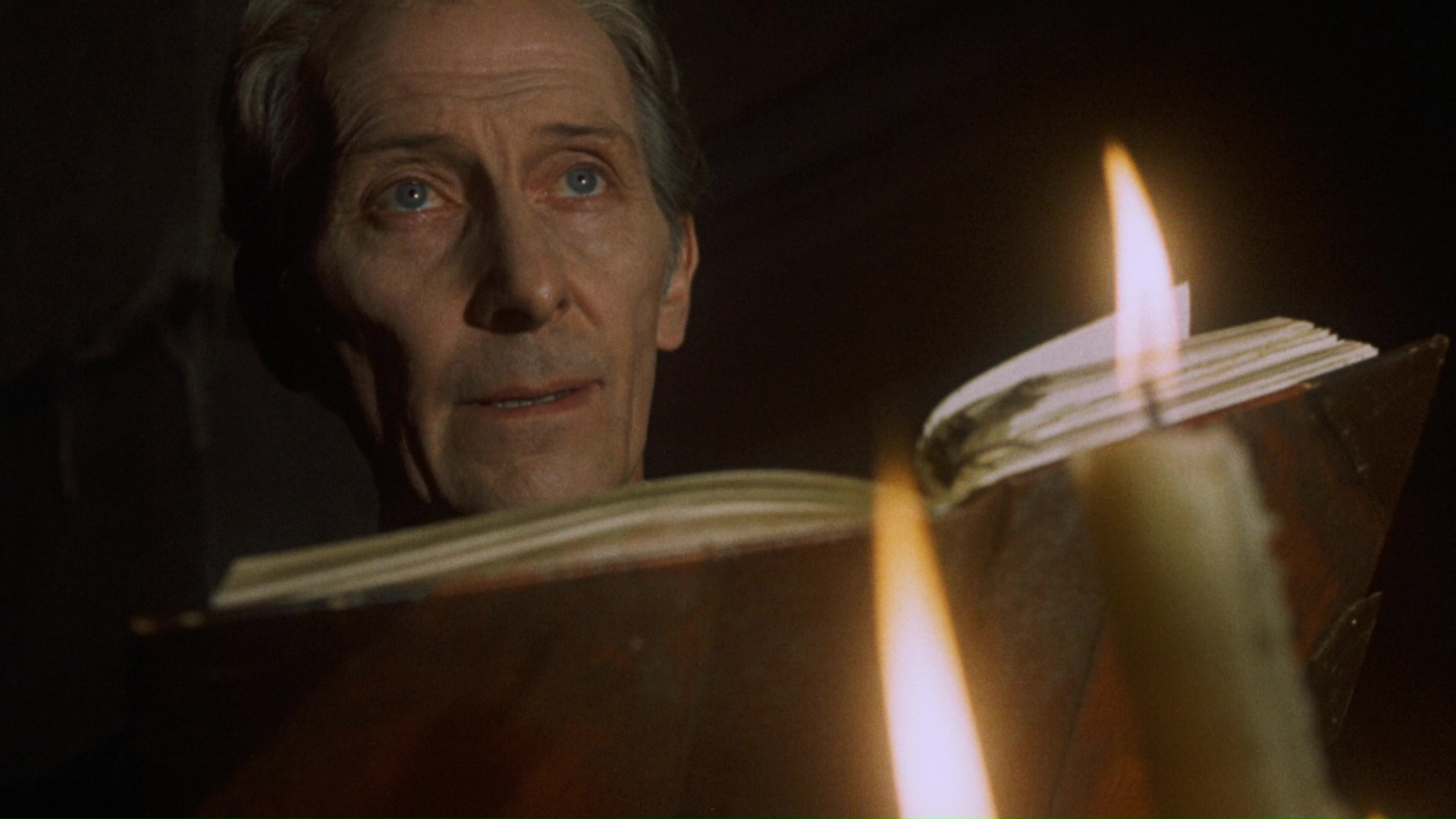 the old copyright information. The image is presented open matte, with plenty of extraneous headroom visible throughout the film. A sharper-looking 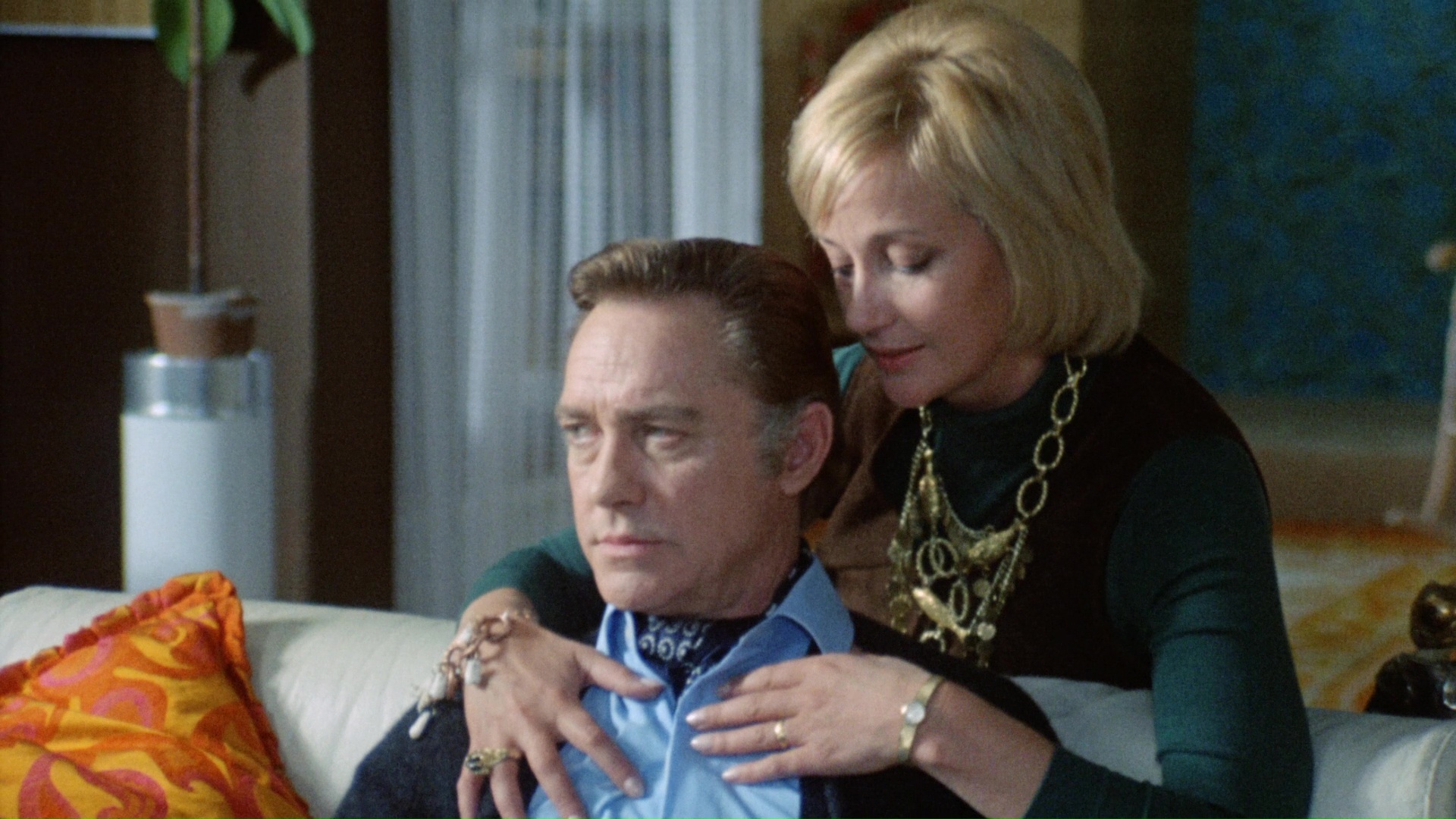 transfer with the original title card finally appeared in 2003 in the UK courtesy of Anchor Bay UK, who packed the film in their Amicus coffin-set. Unfortunately, while the requisite phony 5.1 and DTS mixes are less distracting than usual, the transfer is sabotaged by erroneous progressive flagging which causes jittery motion problems and other nasty video glitches when viewed in either interlaced or progressive modes; it's a real mess. Finally Dark Sky managed to get it right in 2006 with its American incarnation, a beautiful transfer from the original negative that blows away any competitors. The opening exterior shots still look a bit grainy and drab (presumably on purpose), but otherwise it's a fine viewing experience all the way. The Dark Sky disc features the original mono track only, which is just as well. Both the Dark Sky and Anchor Bay releases contain a solid featurette, "Inside the Fear Factory" (20m38s) in which Amicus' Max J. Rosenberg, Baker, and Freddie Francis sketch out the company's interesting history in solid fashion for beginners, as well as an enjoyable commentary track with Baker and cinematographer Neil Binney, covering most of the film's technical aspects and doling out a few nifty stories about the production. The Dark Sky disc finally unearths the original theatrical trailer, an enjoyable bit of showmanship that rattles through the entire cast, along with promos for The Beast Must Die and And Now the Screaming Starts. The Dark Sky disc also includes a good still and poster gallery, cast bios, and liner notes by Peter Cushing scribe

After that the film lay dormant for over a decade until Severin Films gave it another shot in 2017 with separate Blu-ray and DVD editions. The HD transfer looks a bit different compared to the prior releases, including quite a bit of visible info on the left side and some more on the other edges to varying degrees throughout the film. The use of moderate diffusion in 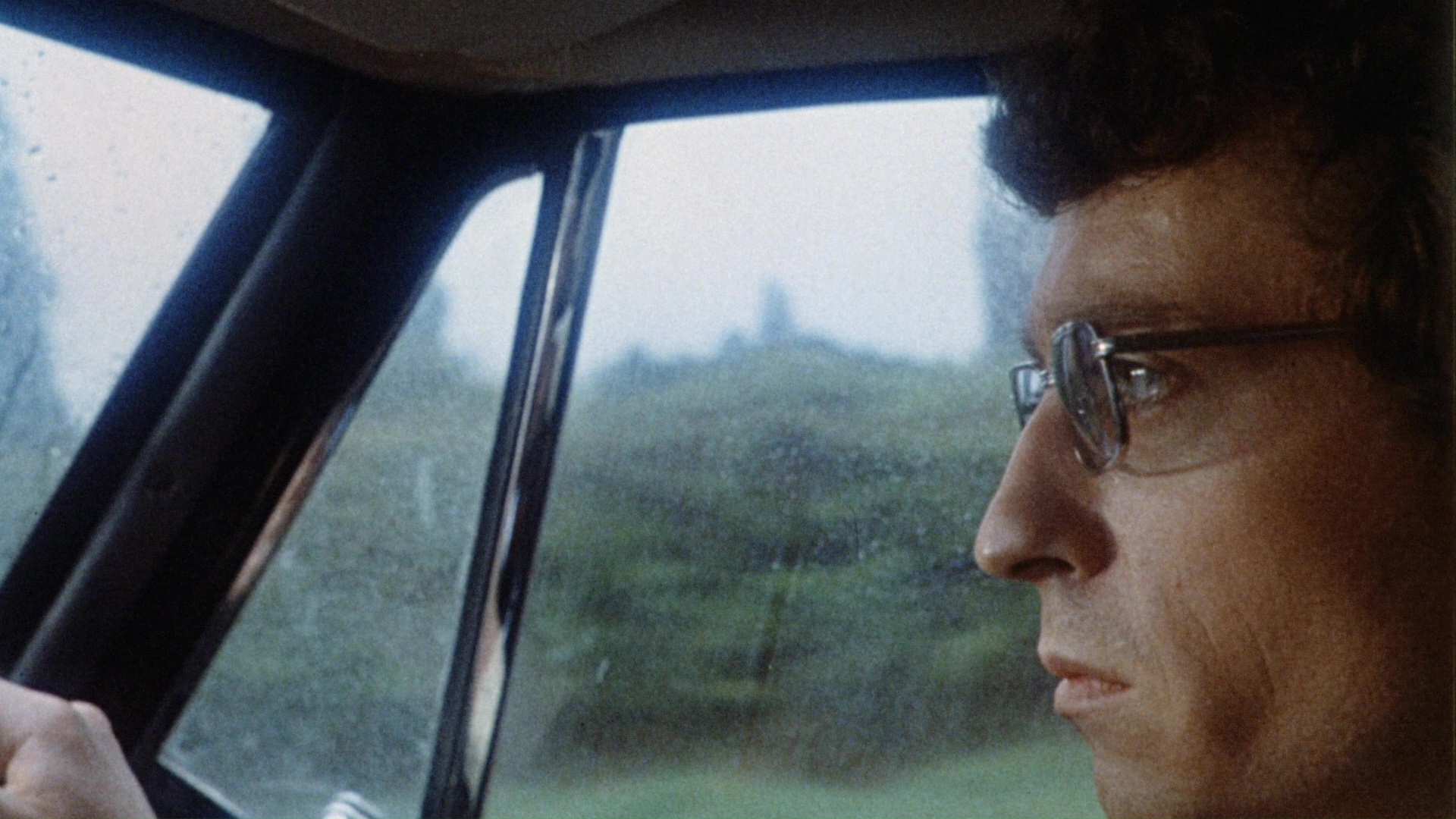 several scenes will always give the film an unmistakable look, and the disc seems to handle it well an appearance that can't really be called restored but does look as healthy as the film has ever been on home video. The DTS-HD MA English mono audio sounds as good as could be expected given the undemanding original sound mix, which doesn't exactly try to give the score a major sonic workout. A Spanish dub track is also included, along with optional English subtitles.

Ported over from the Dark Sky disc are the Baker commentary, "Inside the Fear Factory," and the theatrical trailer. New to this release is "Two's A Company" (18m18s), a BBC report from the set aired to coincide with the theatrical release with Baker, Rampling, James Villiers, Megs Jenkins, producer Milton Subotsky, art director Tony Curtis, and production manager Teresa Bolland seen in interviews and making-of footage from the third segment. It also offers a useful quick sketch of the history of Amicus ranging from its horror films to artier projects like The Birthday Party and even It's Trad Dad! A video interview with Fiona Subotsky (9m38s) features recollections of her late husband, explaining how his love of fantastic cinema led to his Amicus partnership with Rosenberg and a lifelong passion for making films with a 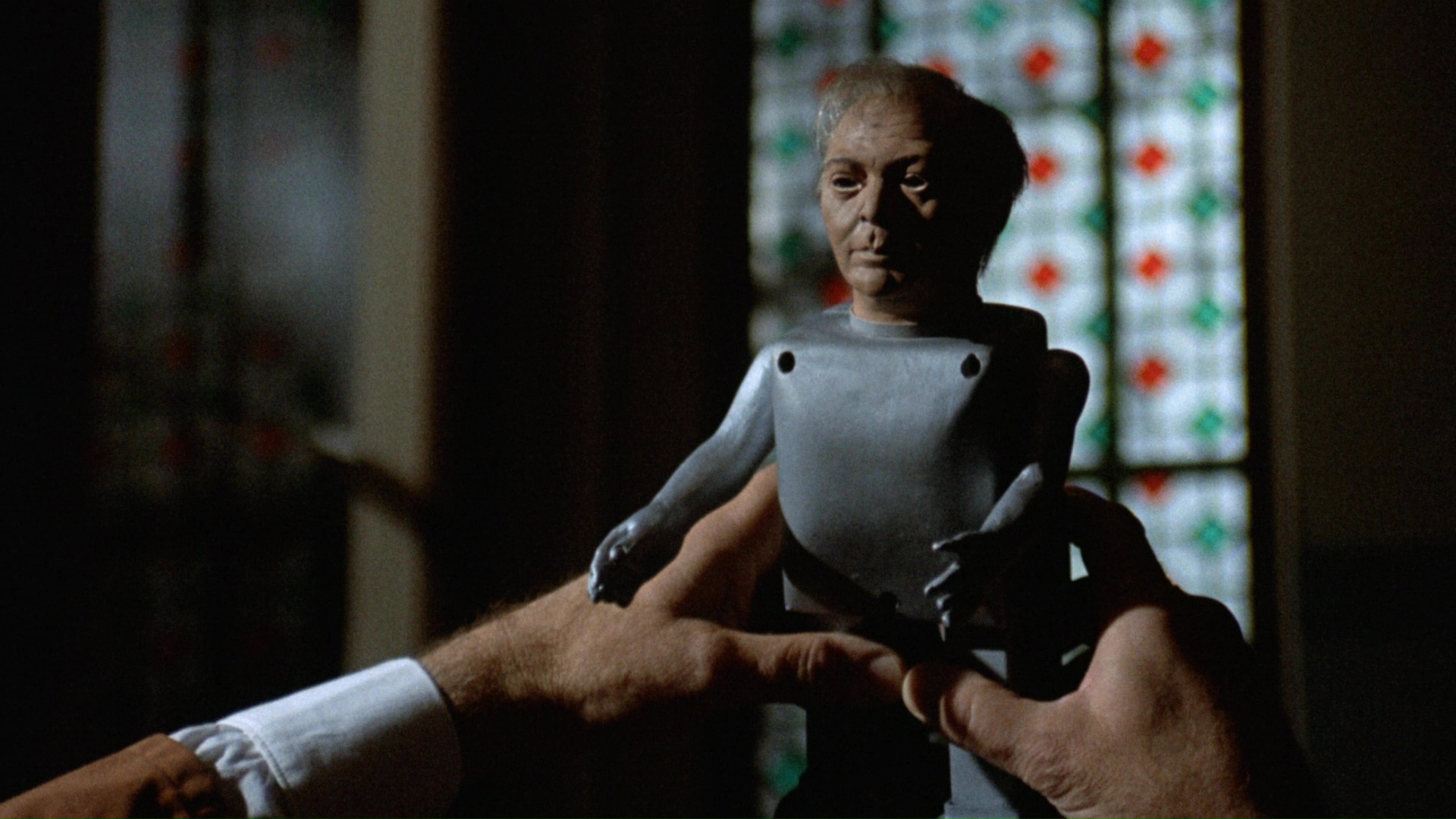 particularly keen interest in the writing process and even songwriting. Finally, David J. Schow offers an analysis of Bloch (20m55s) from his early days writing pulp fiction through his glory days as the author of Psycho and a "secret weapon" in the Amicus arsenal, not to mention a lucrative career writing for television. Also 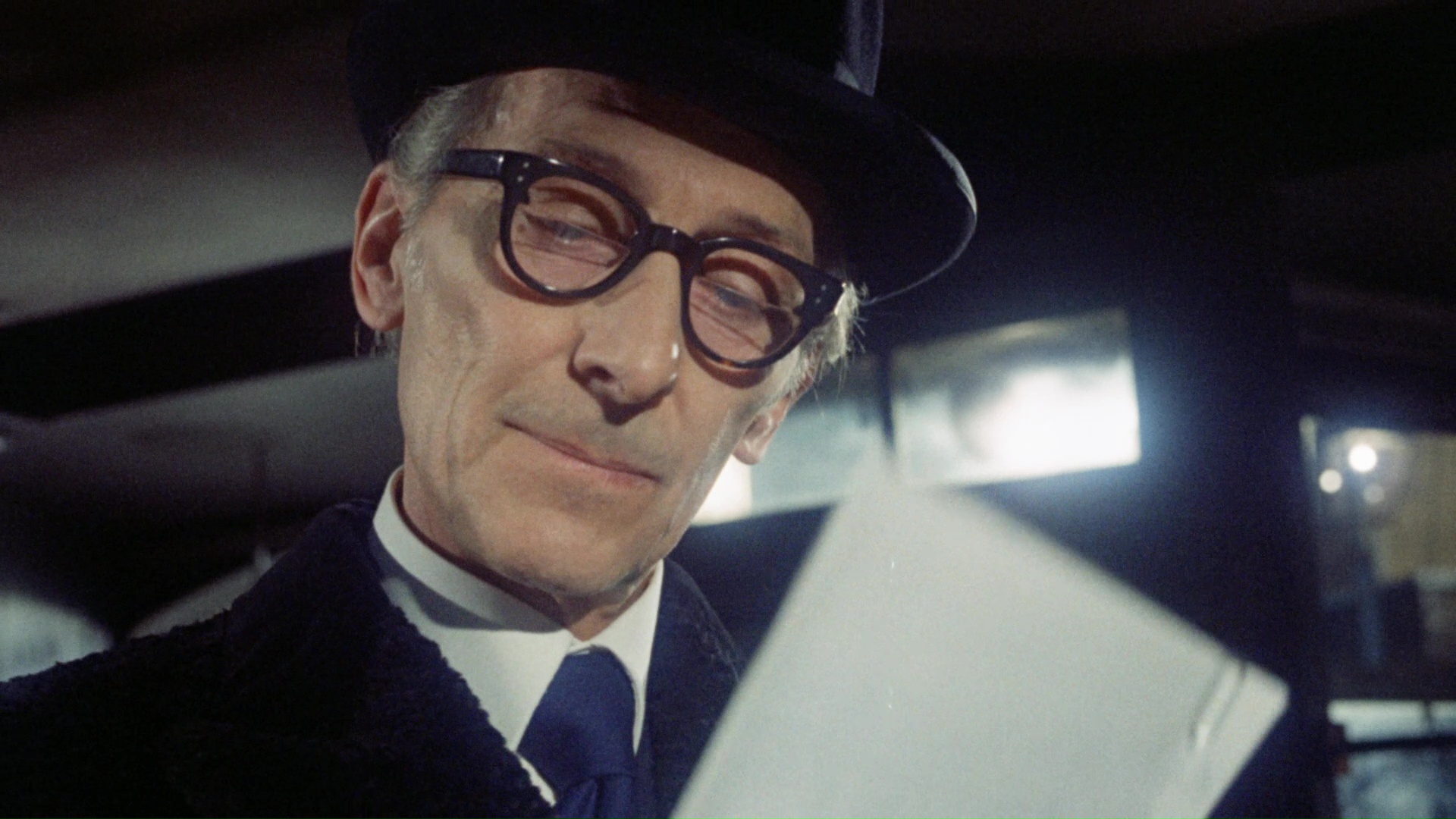 tucked away if you do some hunting is an alternate full frame trailer that in some ways plays much creepier than the more familiar one.

The Blu-ray is also available as part of a four-disc boxed set, The Amicus Collection, along with And Now the Screaming Starts, The Beast Must Die, and a bonus disc of Amicus goodies highlighted by a trailer reel, "Dr. Terror's House of Trailers" (64m16s). What's in there? City of the Dead, Ring-a-Ding Rhythm, Dr. Terror's House of Horrors, Dr. Who and the Daleks, The Skull, Daleks' Invasion Earth 2150 A.D., The Psychopath, The Deadly Bees (a major trailer rarity!), Torture Garden, Danger Route, They Came from Beyond Space, The Terrornauts, The Birthday Party, A Touch of Love (as Thank You All Very Much), The Mind of Mr. Soames, Scream and Scream Again, The House That Dripped Blood, I, Monster, What Became of Jack and Jill?, Asylum, Tales from the Crypt, The Vault of Horror, And Now the Screaming Starts, From Beyond the Grave, Madhouse, The Beast Must Die, The Land That Time Forgot, At the Earth's Core, The People That Time Forgot, The Uncanny, and The Monster Club. Also slipped in separately is a bonus reel (5m27s) with alternate trailers and TV spots for From Beyond the Grave (as The Creatures), Torture Garden, The Vault of Horror, The Skull, and Tales from the Crypt. A mammoth audio interview with Subotsky (181m16s) by Philip Nutman pretty much covers everything about his life and career you could possibly imagine, while Rosenberg is represented with a separate audio interview (47m26s) with Jonathan Sothcott, also detailed the creation and heyday of Amicus as well as his various side projects. The set is also available directly from Severin, including an option with an Amicus book or various related collectible items. 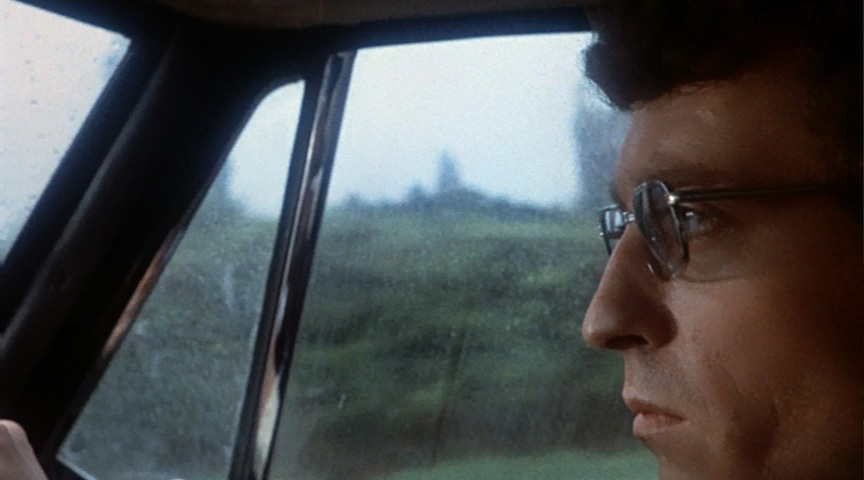 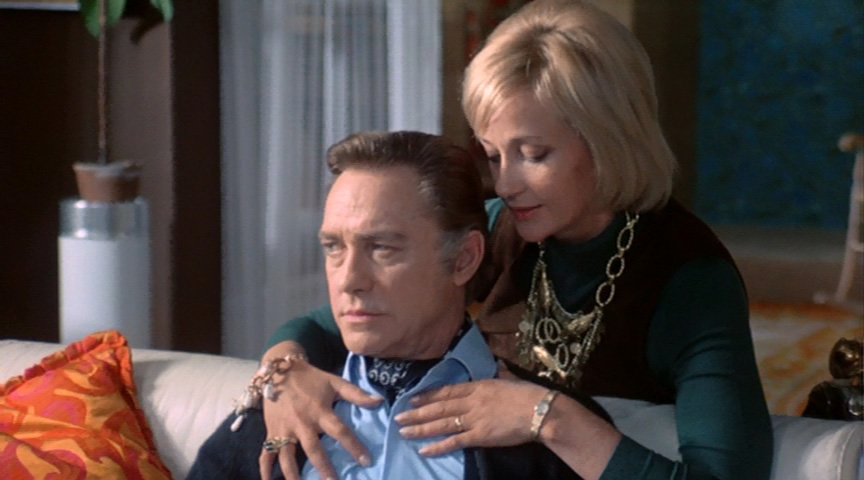 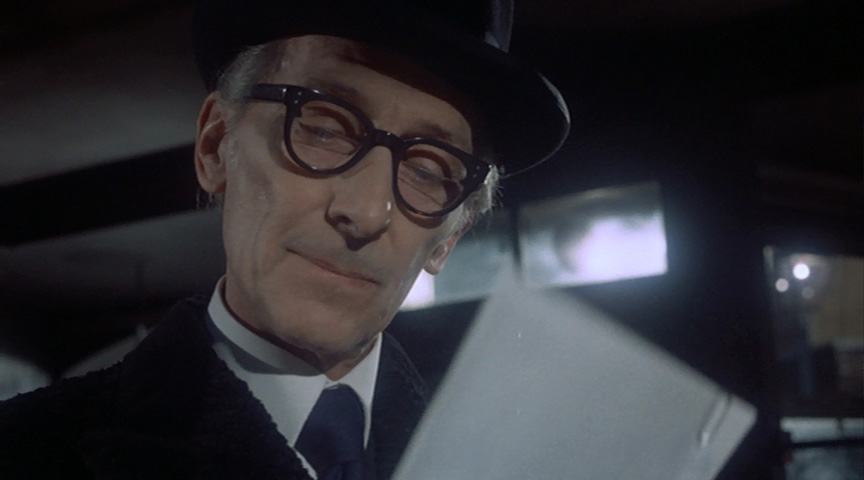 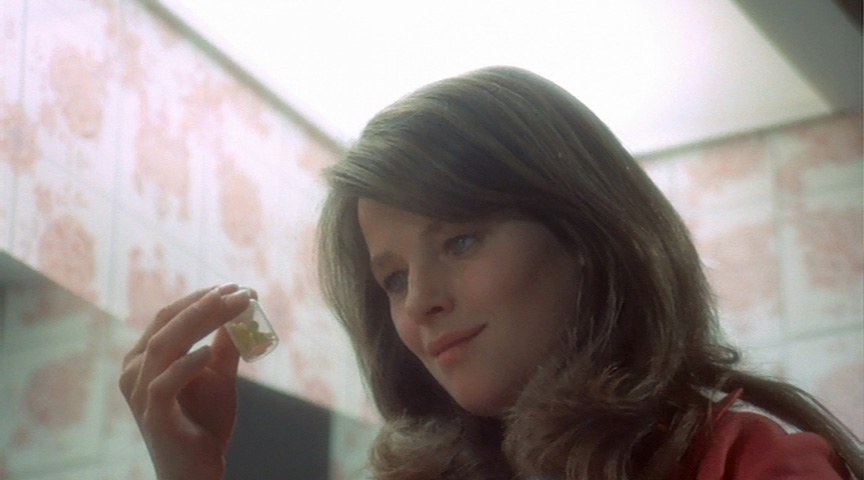 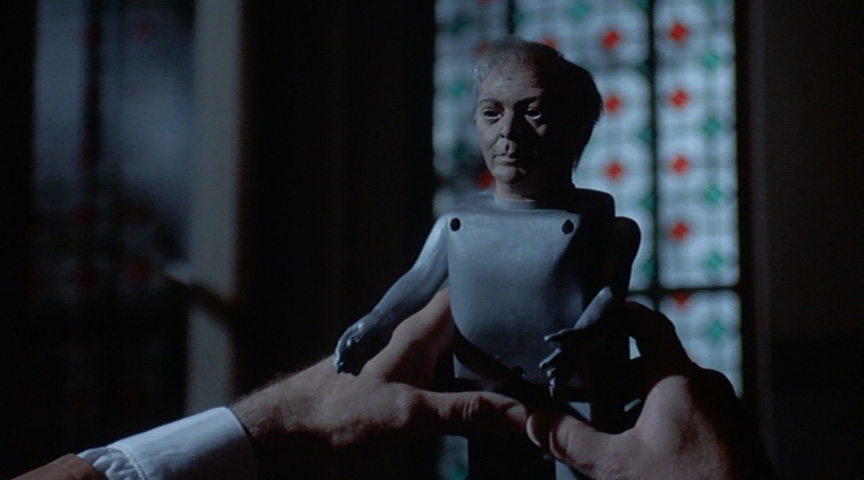