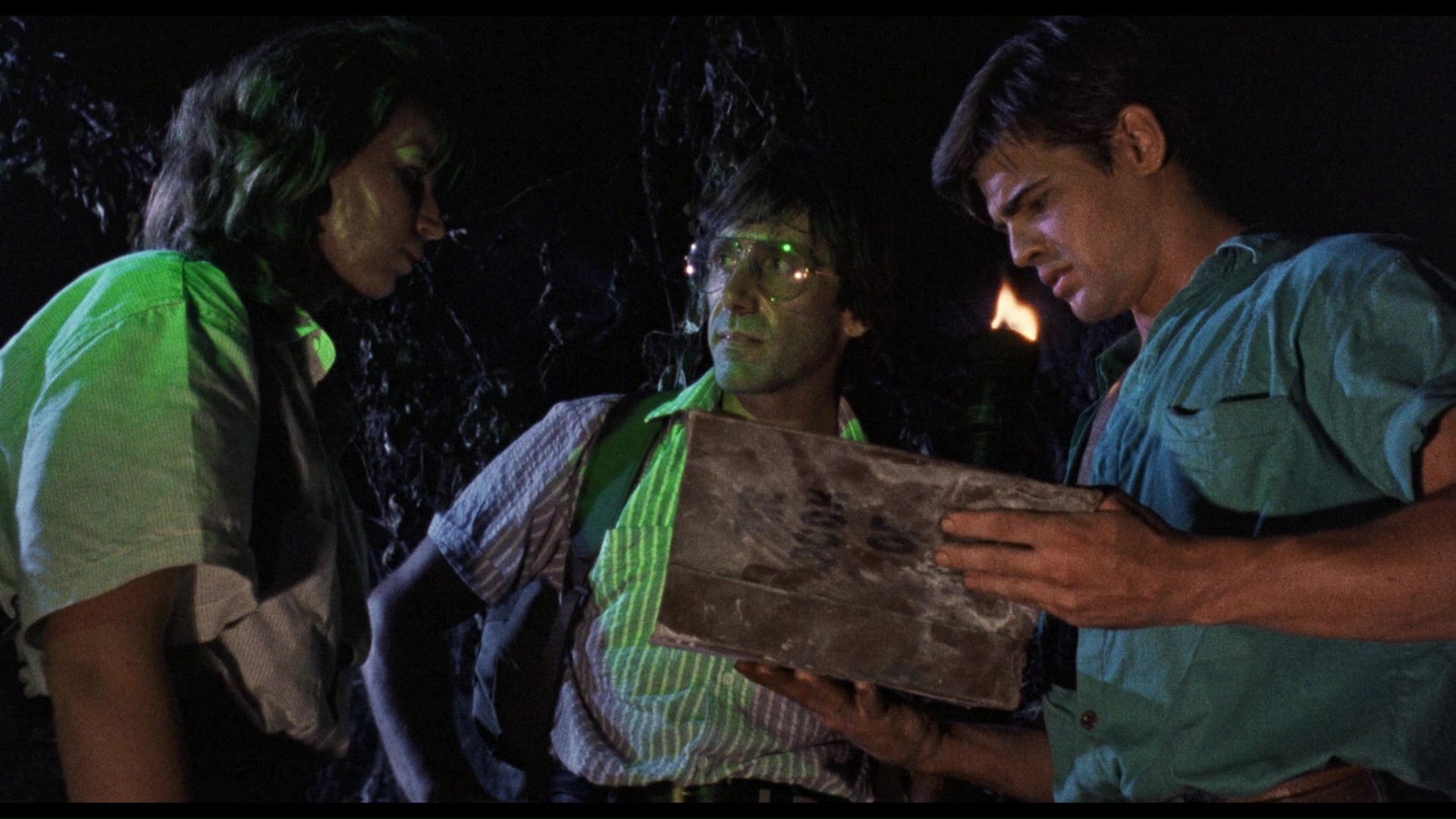 wound down in the late 1980s, attempts to recapture the glory days (or is that gory days?) of Fulci and Argento resulted in a lot of bizarre genre hybrids, most of which wound up being released only in Europe and Asia. Although Fulci's Zombi 3 misfired at the box office, that film's writer, Claudio Fragasso (of Troll 2 and Monster Dog fame), took over directorial chores for another Filipino-shot romp with the undead, After Death. Promoted as Zombi 4 (but not titled as such in the film itself), this ramshackle outing delivers bucket loads of gore and an equally rich stream of unintentional guffaws.

The goofiness begins full throttle in the obligatory opening set piece, which finds a hyperactive voodoo doctor fending off a gang of white interlopers by turning his drooling, zombie wife loose on them. The sole survivor returns two decades later as pretty Candice Daly, who for no particular reason tags along with a band of mercenaries led by the stoic Chuck (switch-hitting porn star Jeff Stryker, billed as "Chuck Peyton"). Of course, she isn't aware that this is the same island of doom until it's too late when they're all besieged by the hungry undead. Our heroes run into a band of inept scientists who have accidentally increased the zombie population, resulting in a claustrophobic voodoo showdown strangely reminiscent of the "magic circle" bit from The Devil Rides Out, only sillier. Eventually it all comes down to a handful of survivors and an ultra-moist finale "borrowed" from the "other" Zombi 3, Burial Ground.

Not many people are likely to confuse After Death with a good movie, but zombie and splatter fans can easily get their jollies here. Faces are torn off in lingering detail, chest cavities are turned into impromptu puppeting devices, 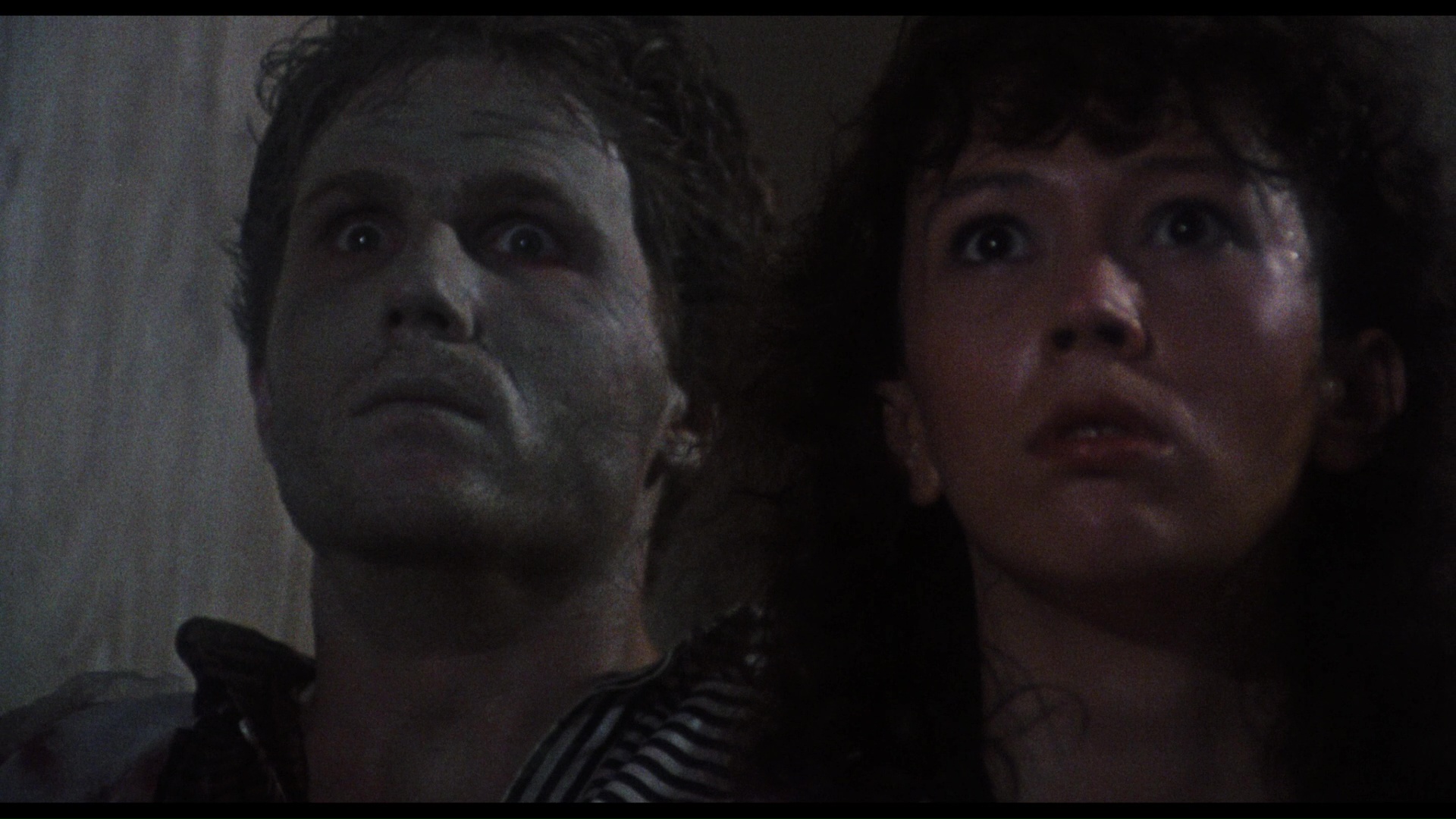 bullet squibs burst twenty times wetter than any real gunshot... well, you get the idea. Fans of those agile, gun-toting, kickboxing zombies from Nightmare City and Zombi 3 will find 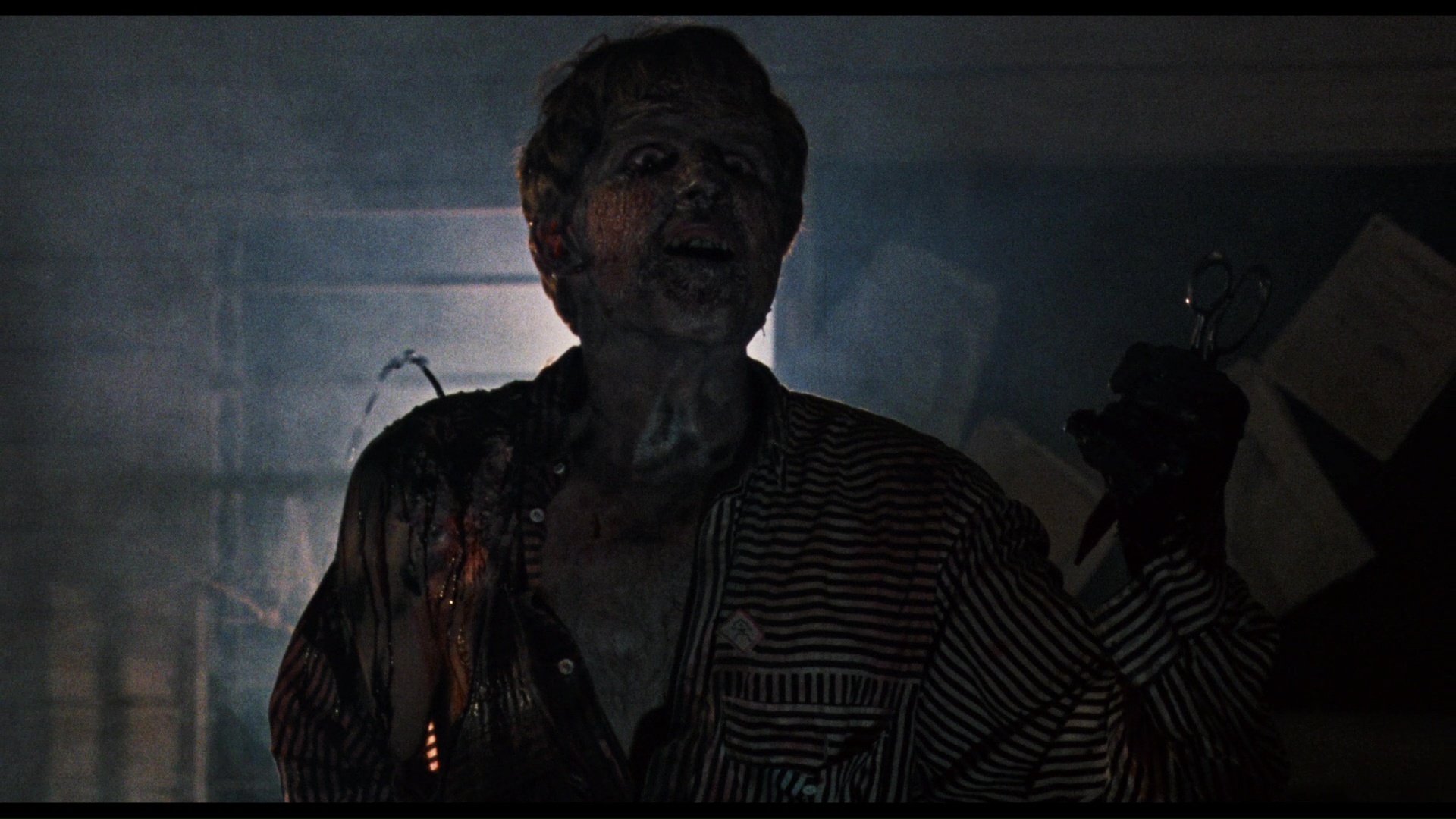 more of the same behavior here as well. For some reason the two American leads didn't loop their own voices, but the dubbing stays in sync and is better than average for this time period. Ah, and let's not forget the hilarious synth score by Al Festa, the man who went on to perpetrate Fatal Frames; the theme song alone belted by hard rocker Maurizio Cerantola is nearly worth the DVD's price tag.

Now here's where things get confusing. Most fans first saw this film via Japanese video as After Death; then a passable but drab transfer popped up on British DVD as Zombie Flesh Eaters 3 (since Zombi 3 was retitled Zombie Flesh Eaters 2; got that?). Then we had the first DVD edition in 2002 from Media Blasters, which is called Zombie 4: After Death. The anamorphic presentation is colorful and features nicely rendered black levels (a first for this title), though the deliberate soft focus photography in some shots translates to an erratic presentation. The packaging promises a trailer and an interview with Fragasso (14m14s), which turns out to be a solid, 17-minute discussion which dovetails directly from his interview on the Zombi 3 disc. He explains the genesis of the film and the location shooting in great detail and seems to offer a reasonable presentation of the industry during that period. However, a few unadvertised bonuses turn up as well. Daly appears for a very brief (2m53s) on-camera interview; she seems pleasant enough but her recollections are limited. However, the most unexpected extra turns out to be a video interview (6m16s) with Stryker, who looks like he was caught on the way to his car in L.A. He explains how he was hired because uncredited producer Werner Pochath (the late, great Eurosleaze character actor from Mosquito and The Cat o' Nine Tails) was a big fan of his porn work, then repeatedly characterizes his performance as "runnin' around in the jungle, lookin' freaked out!" Along with some liner notes (in illegibly tiny print), the usual Media Blasters tie-in trailers are also included. 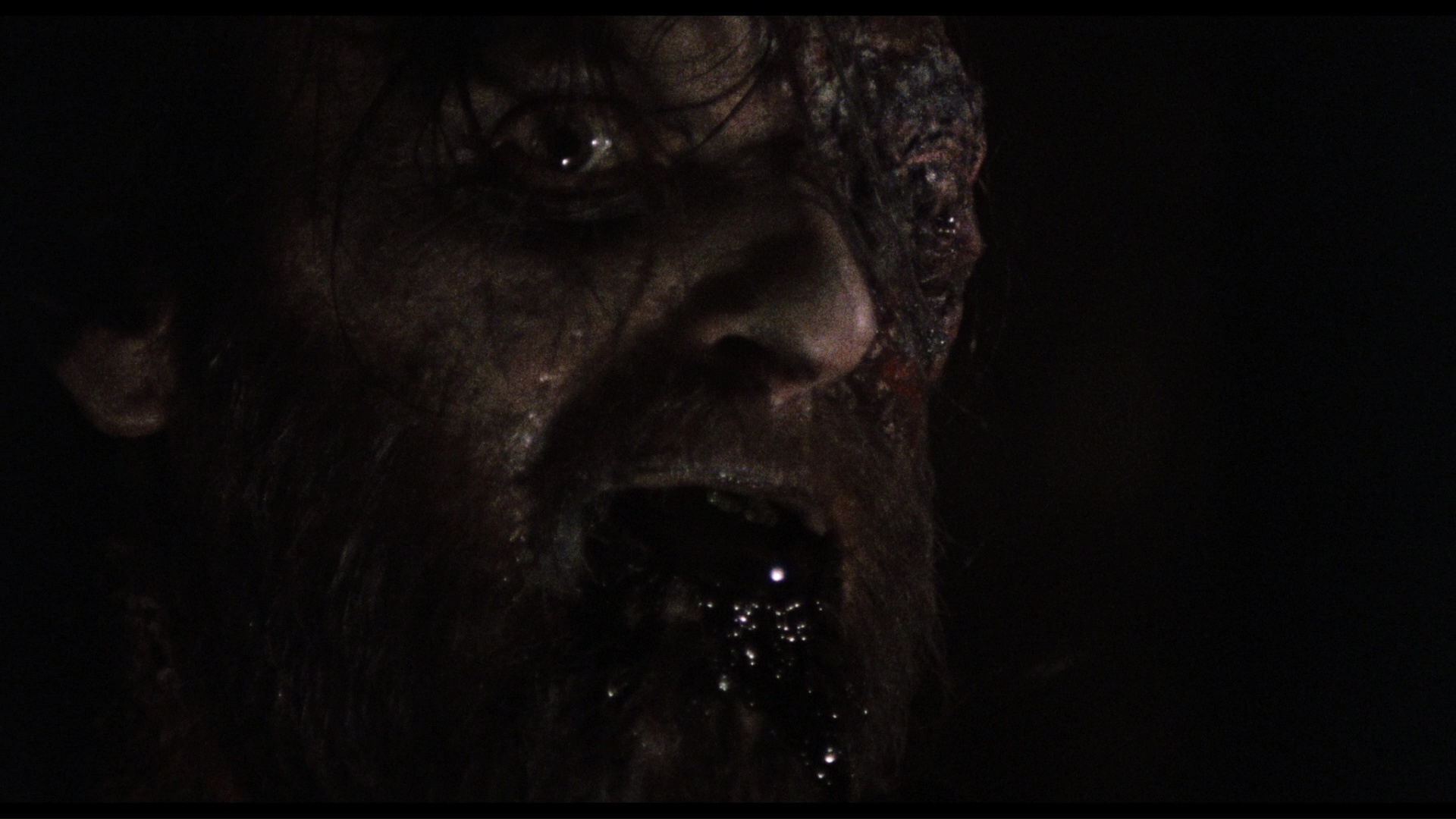 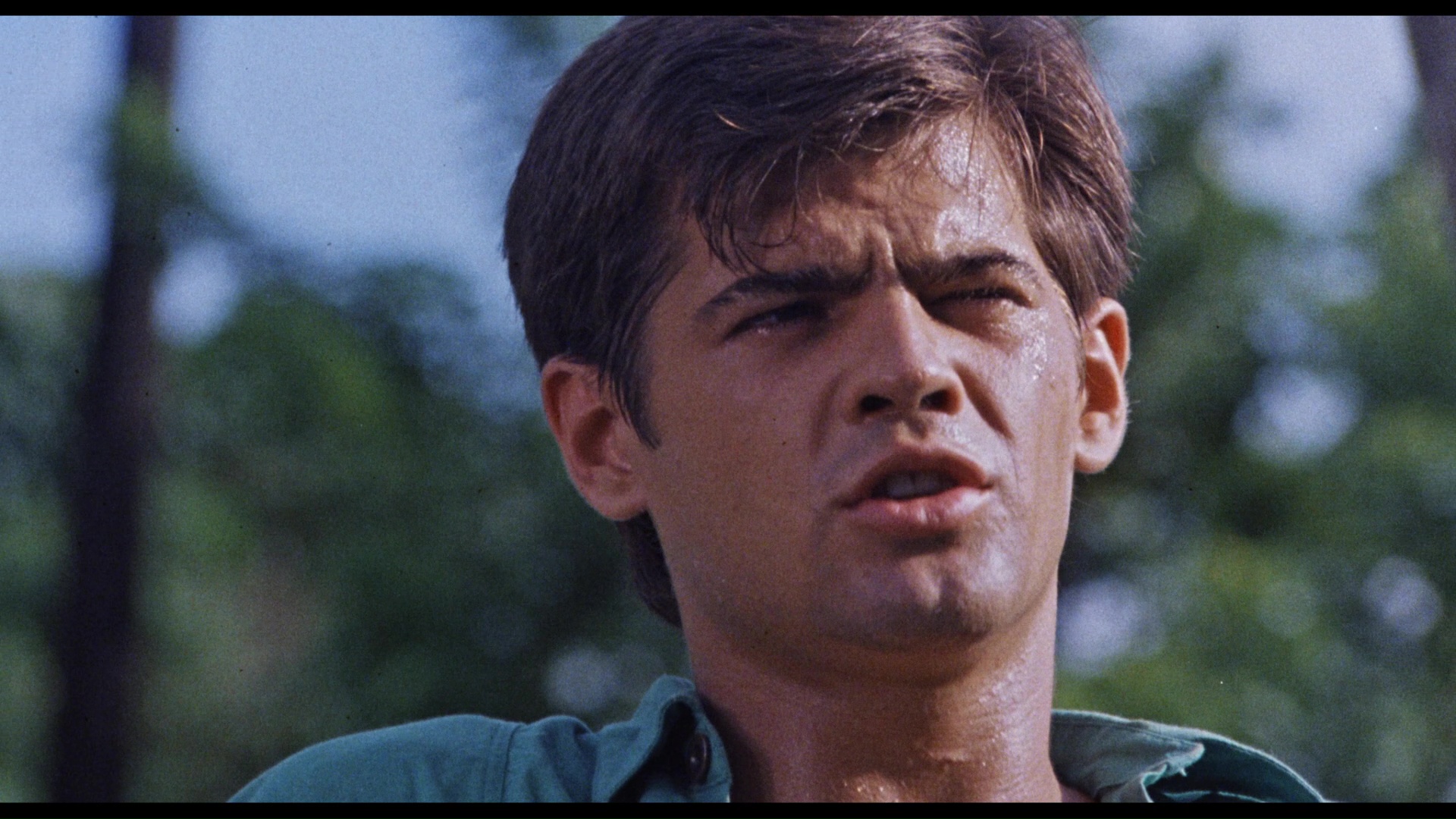 In 2018, the film burst back into circulation from Severin Films as separate Blu-ray and DVD editions with a refurbished HD scan that improves in all the expected areas like detail and color fidelity. The prior DVD tried to boost the darker scenes and ended up with a harsh appearance at times, whereas here the original moody, dark aesthetic is kept in check. There's also a substantial amount of extra info on the sides. It isn't exactly pretty in the traditional sense given that it's a cheap, grainy film with long sequences shot in low lighting, but you'll likely never see Zombie 4 looking better than this. The film is also presented completely uncut, running 87m52s versus the Media Blasters which ran 84m3s. The English DTS-HD MA 2.0 audio also sounds fine given the nature of the film itself. The always entertaining husband and wife team of Fragasso and writer Rossella Drudi (plus their usual scene-stealing tabby cat) turn up for "Run Zombie Run!" (31m50s), covering the logistics of the Philippines shoot, the challenges of Fragasso shooting a film for himself after so many Bruno Mattei collaborations, the social implications of zombie films, the perils of the local cuisine, and a hilarious appraisal of "crazy guy" Al Festa. The new "Jeff Stryker in Manila" (9m32s) is a more professional interview compared to the older Stryker one that covers the Pocath connection again but lays out his digression into Italian horror as well as Joe D'Amato's Dirty Love. Finally, "Blonde vs Zombies" (2m18s) is a streamlined (no questions) cut of the older Daly interview. Also included are the English trailer and a reel of behind-the-scenes footage (3m43s) shot on VHS with a very animated Fragasso bellowing orders on the set. In keeping with label tradition, you can buy the film as a Blu-ray or DVD or part of The Zombie Dark Deluxe Bundle or The Zombie Dark Super Deluxe Bundle. Best of all, the Blu-ray comes with a bonus soundtrack CD (apparently its first release in any format) so you can blast "Living After Death" at full blast in your car and make everyone else jealous. 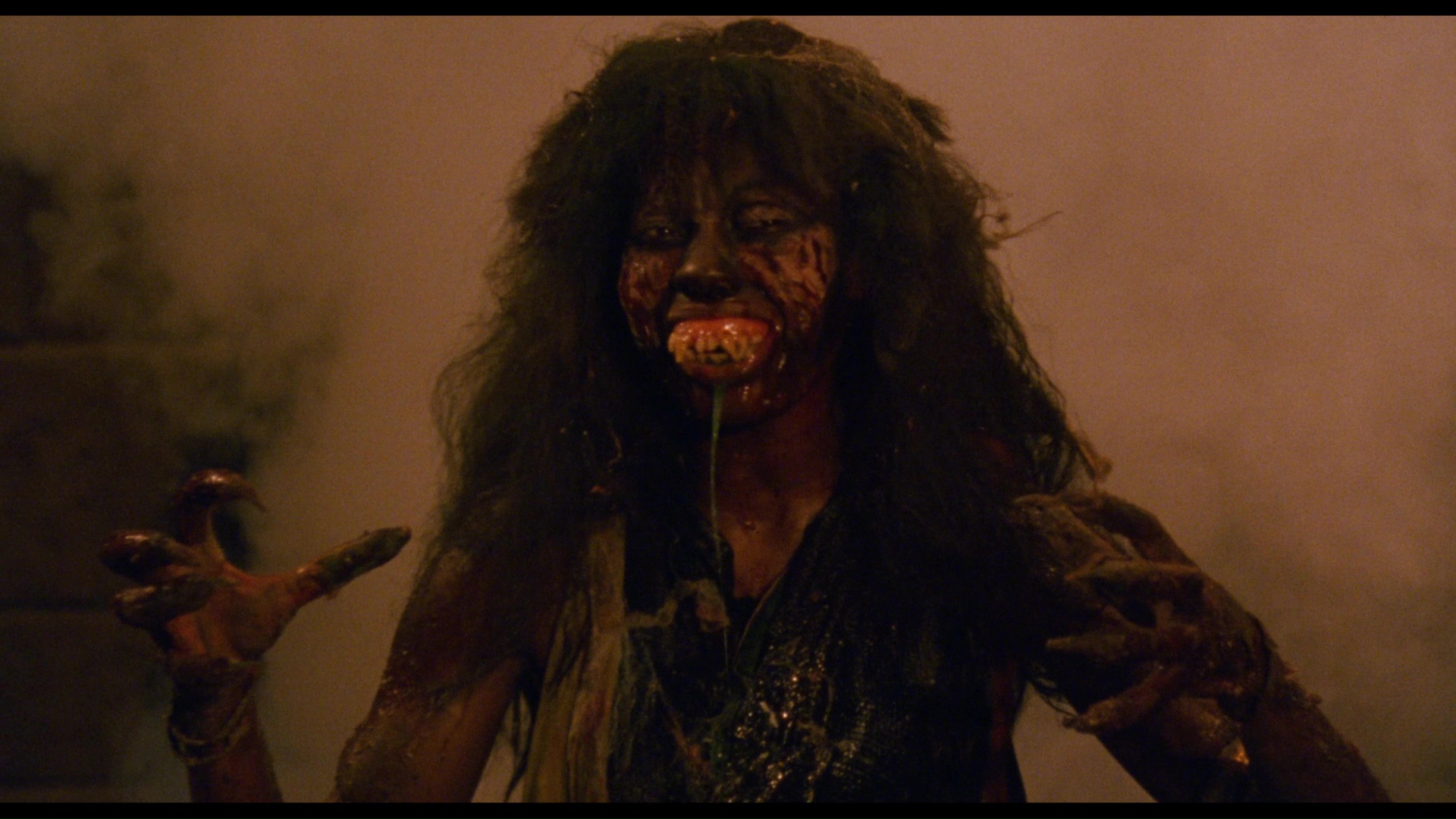 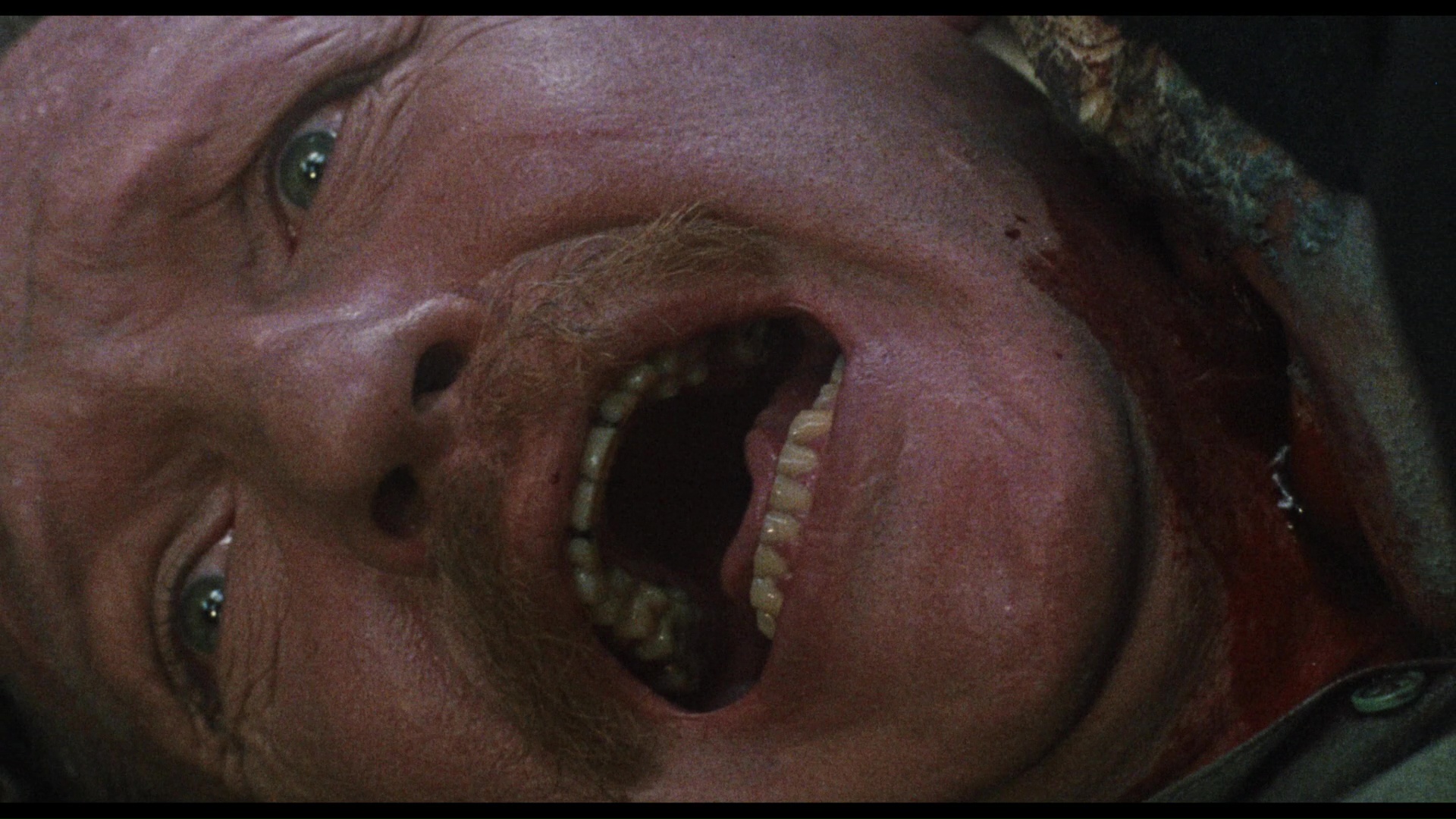 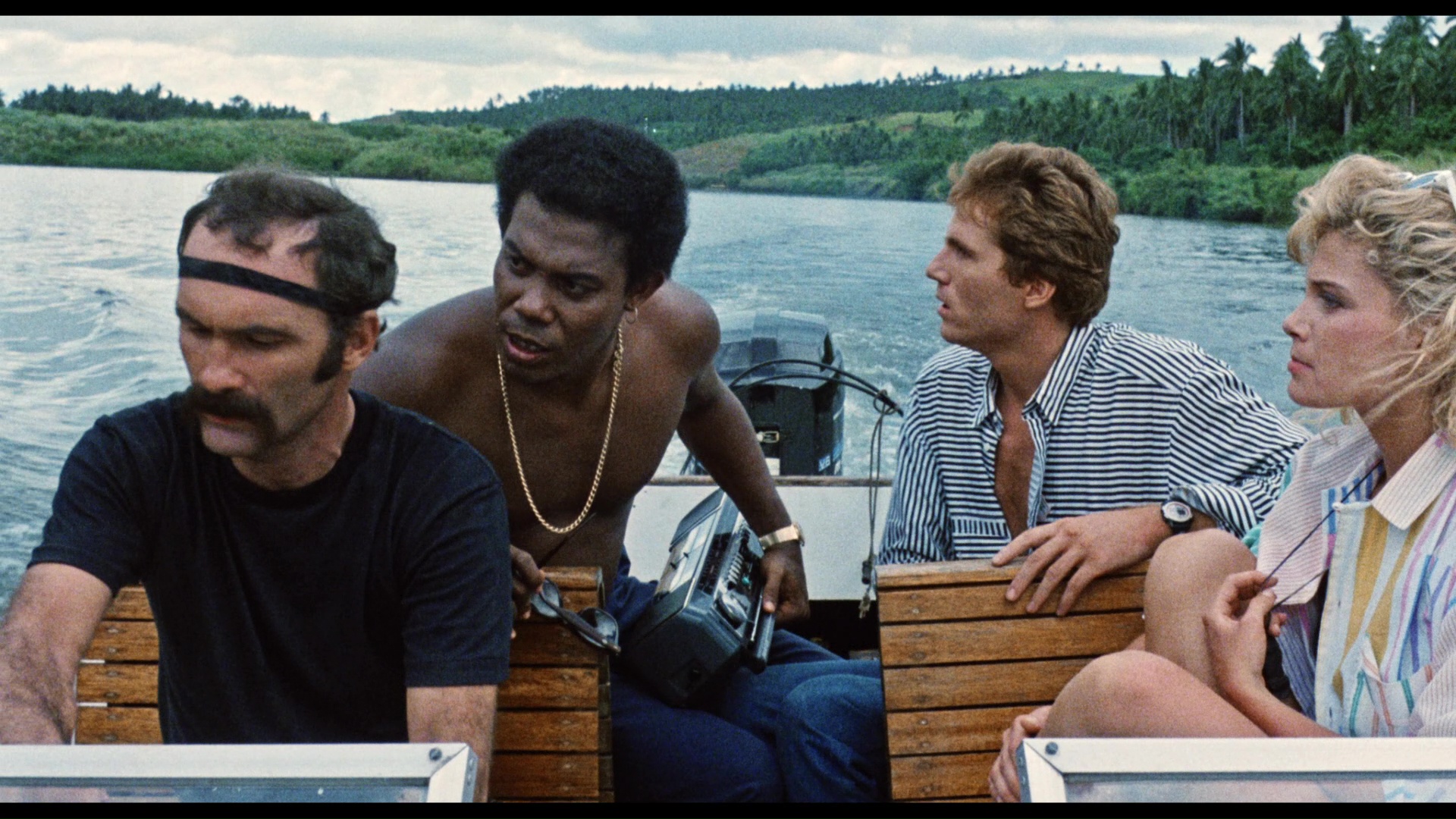 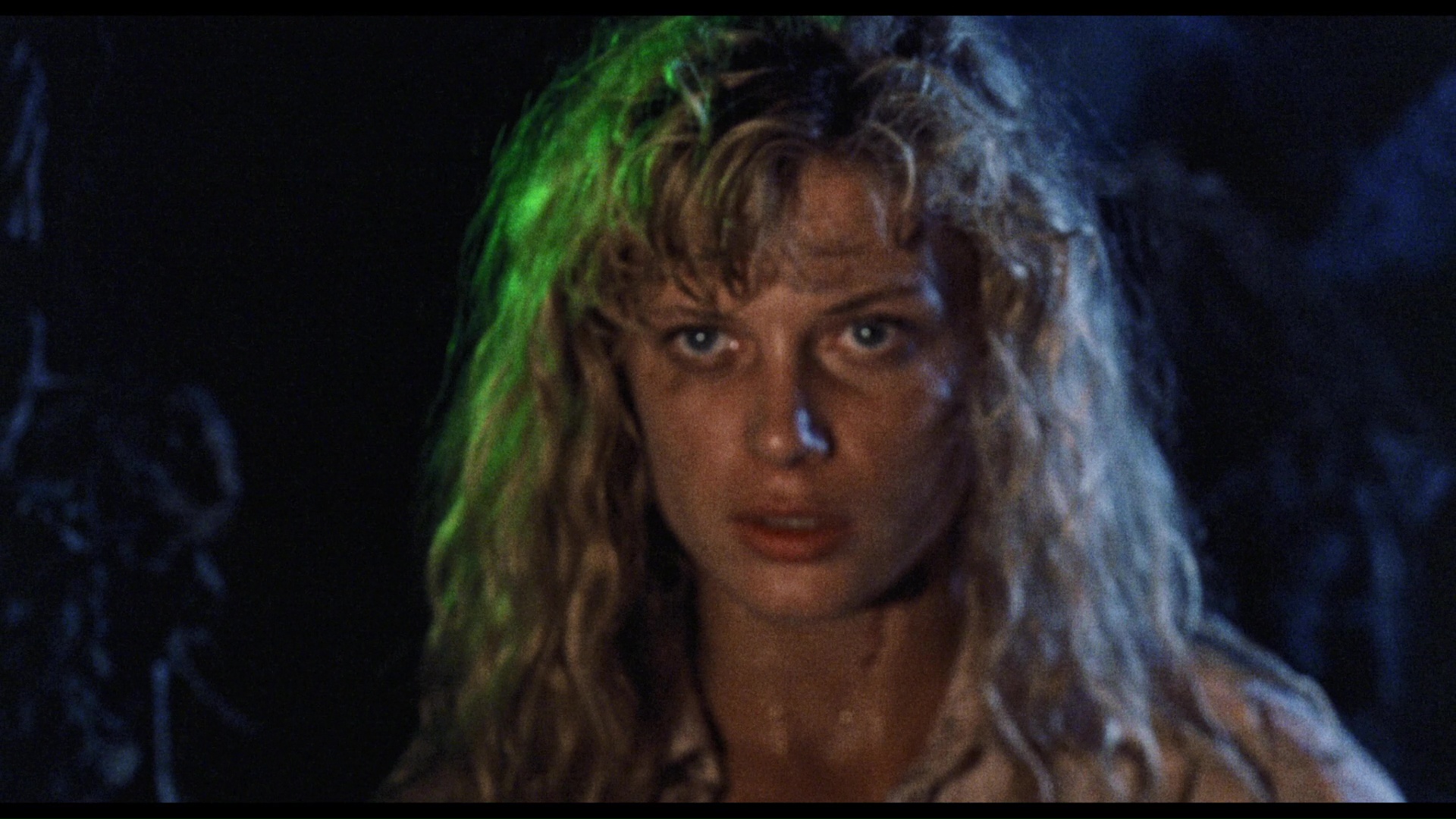 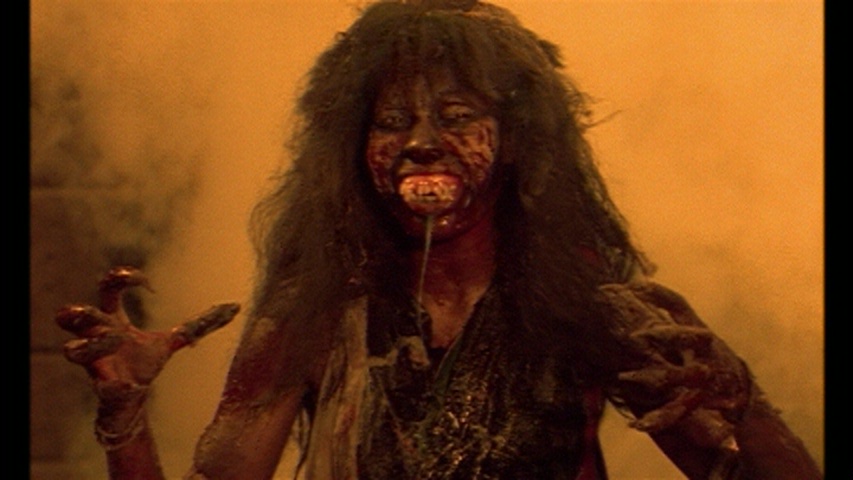 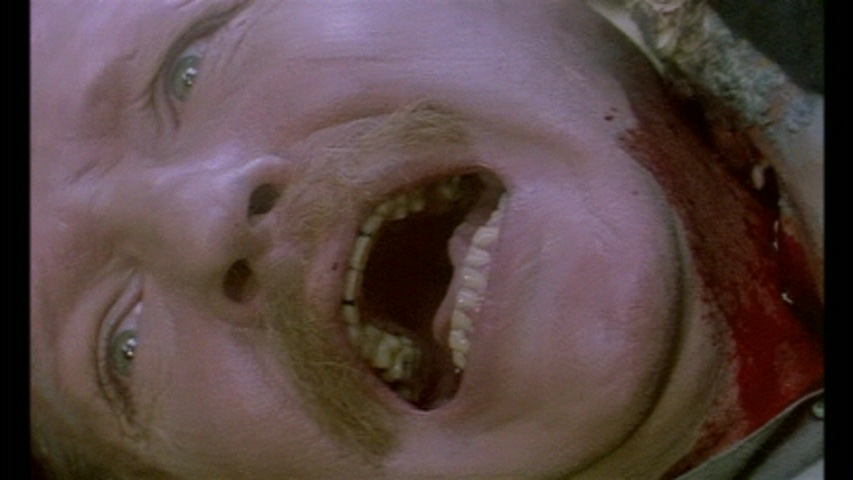 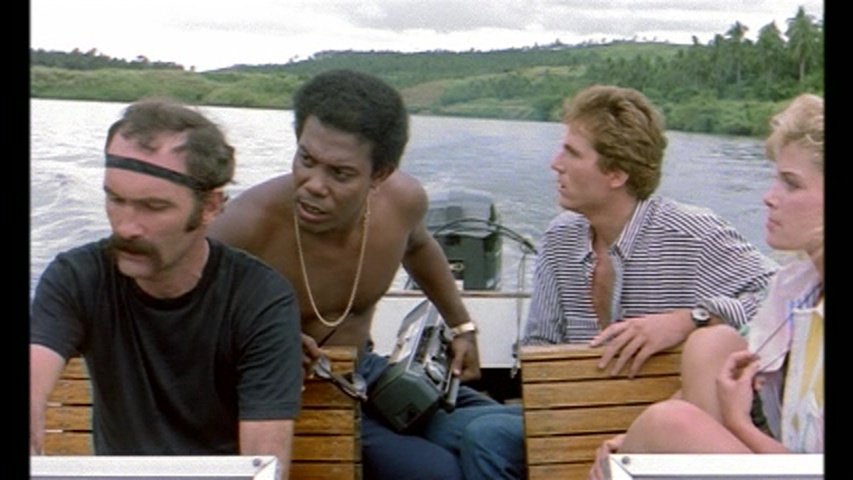 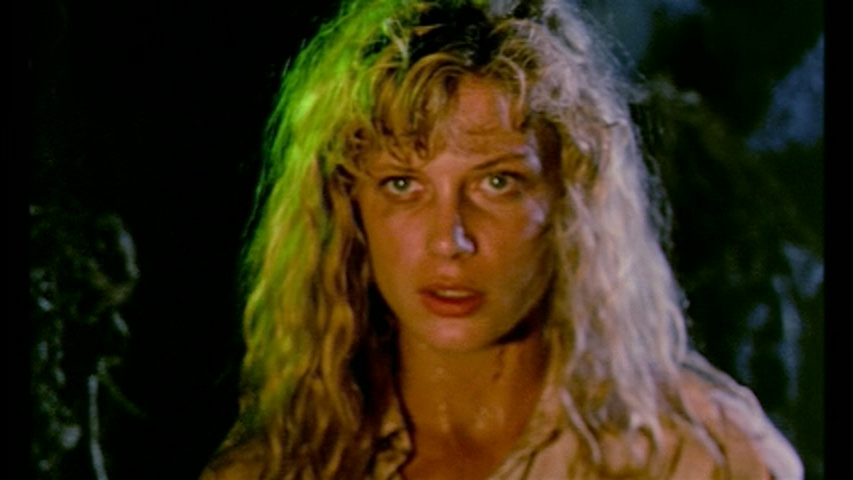